25 May 2016
26
According to central media, the anniversary Russia-ASEAN summit in Sochi was held in an atmosphere of friendship and mutual understanding. This was stated by President Putin. All participants in the summit showed willingness to join efforts in the economy and in matters of security. The event cost 1,36 billion rubles. Following the meeting, a Comprehensive Action Plan for the development of cooperation on 2016-2020 was adopted. and some other documents. 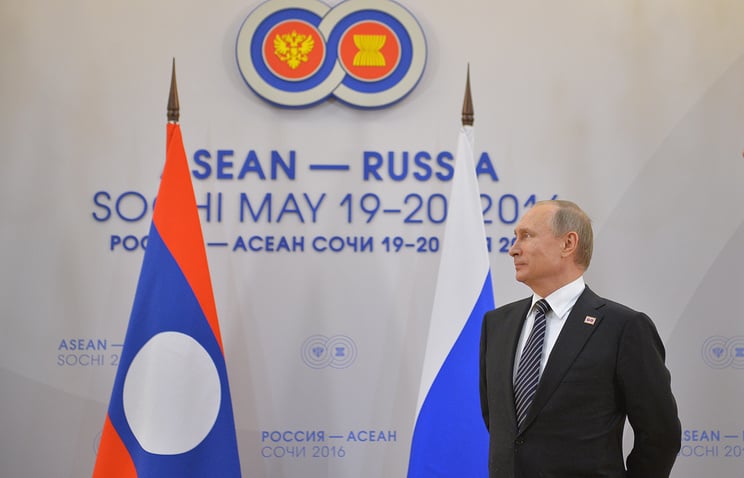 Recall in the ASEAN involved 10 states: Brunei, Vietnam, Indonesia, Cambodia, Laos, Malaysia, Myanmar, Singapore, Thailand, the Philippines. Representatives of all the listed countries, except the Philippines, arrived at the current event (elections were held there and the president was replaced).

As noted by "Russian newspaper"The participants of the event paid special attention to the economy. Moscow suggested thinking over the idea of ​​a free trade zone between EurAsEC and ASEAN. The idea of ​​partnership between EurAsEC, SCO and ASEAN aroused interest.

WG announces the statement of the Prime Minister of Laos (now this country is chairing ASEAN). He dispelled rumors about external "pressure": he said that no one pressed upon the ASEAN countries so that their representatives would not come to Sochi.

For the summit, Moscow prepared a “road map”: 57 projects that are aimed at forming joint technological and innovative alliances. ASEAN countries require hydrocarbons and electricity, and Russia, of course, is ready to meet demand.

Also, President Putin spoke about the stability of the Russian economy and the passage of the "bottom of the crisis." “Our economy has proved its stability in the conditions of unfavorable external conjuncture,” RG quotes Putin. “The bottom of the crisis in 2015 can be considered as passed.”

Also discussed the topic of tourism. Putin expressed the hope that the situation in the countries of traditional recreation of Russians normalizes. It was also about the possibility of direct flights between the cities of Russia and the resorts of ASEAN countries.

“Actually, I really liked this meeting,” the Russian leader admitted. “It seems to be festive in nature ... but it was very useful and very substantive, because we discussed specific areas of cooperation, and even more, specific projects.”

International Orientalist Vladimir Zakharov, author of the publication on the site TASSHe believes that the third Russia-ASEAN summit fixed the completion of an important stage in the formation of trust relations both at the level of the “bilateral” and at the level of the multilateral format Russia-ASEAN. The summit also formulated an agenda for the future. The event resulted in the adoption of the Sochi Declaration, the Comprehensive Action Plan for the development of cooperation for 2016-2020, the report of the Russia-ASEAN group of eminent persons. The President of Russia held talks with each of the heads of delegations, mentioning the political and economic interests of an important, but Chinese, player who was not in Sochi.

Before the summit, the Kremlin’s position regarding the territorial dispute in the South China Sea, where the interests of China and the members of ASEAN intersect, was clarified: it was emphasized that the regional countries themselves should resolve the contradictions.

The analyst notes that the coordination at the UN, APEC and the G20, which was announced at the summit, is becoming a new trend, which gives the RF a chance to get support in international and regional organizations and associations.

Finally, the summit marked the beginning of the development and implementation phase of the EEU free trade zone projects with Vietnam, Singapore, Cambodia, Thailand and Indonesia.

The Kremlin jumped at the visit of the leaders of Southeast Asia as an opportunity to show that Russia still has friends in the international arena, despite the "cold" conflict with the West, the agency said Reuters. On this occasion, even a special commemorative coin was minted.

The agency notes that the official agenda of the two-day summit was built around Russia's ties with ASEAN member countries, such as Vietnam, Thailand and Myanmar, but the meeting was also held with an “eye” on European states and the United States. Openly talked about sanctions difficulties.

Andrei Vorobyov, the governor of the Moscow Region, who attended the summit as a member of the Russian delegation, lamented the "difficult times", that Europe and America "mostly turned away" from Russia. At the same time, he said on the sidelines of the summit, Reuters points out that "countries in Asia and the Pacific are working very actively with us."

How much did the next international event cost?

The holding of the Russia-ASEAN summit in Sochi cost 1,36 billion rubles. Half of this amount is spent on information and telecommunications equipment, the newspaper said "Vedomosti" with reference to the Center for anti-corruption policy of the Yabloko party. 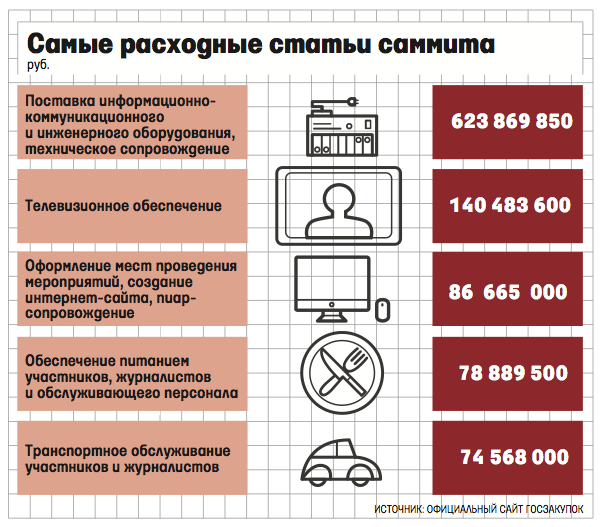 The main items of expenditure on the Russia-ASEAN Summit 2016. Source: "Vedomosti"

Probably, such money is not wasted. Some experts considered the summit to be “informative”.

Director of the ASEAN Center at MGIMO Victor Sumsky said in an interview TASS: “It was a meaningful summit. Moreover, it is meaningful both from the point of view of the assessments expressed in connection with the common interests of Russia and ASEAN in the East Asia region and on a global scale, and from the point of view of the goals that are outlined in the cooperation of Russia and ASEAN for the near future in all areas this cooperation: in the field of security policy, trade and economic relations, humanitarian and socio-cultural contacts. ”

Noted analysts and a friendly atmosphere at the event. Not without notable statements on the reception.

“The atmosphere at the summit is friendly,” writes BFM.ru. - The representative of Thailand distinguished himself: “We are grateful to His Excellency Mr. Medvedev for providing a very warm welcome.” Vladimir Putin laughed back. ”

Despite the large financial expenses, we add, and the utmost attention of the central media to the Sochi event, the summit did not bring any breakthrough decisions. In addition to the famous portion of boredom caused by the next mention of Russian hydrocarbons, viewers of TV channels and newspaper readers hardly got it.

Observed and commented on Oleg Chuvakin
- especially for topwar.ru
Ctrl Enter
Noticed oshЫbku Highlight text and press. Ctrl + Enter
We are
New plants and workshops in Russia in 2015 yearTrojan horses in the SCO?
Military Reviewin Yandex News
Military Reviewin Google News
26 comments
Information
Dear reader, to leave comments on the publication, you must sign in.