Deportation: a lesson or a reason 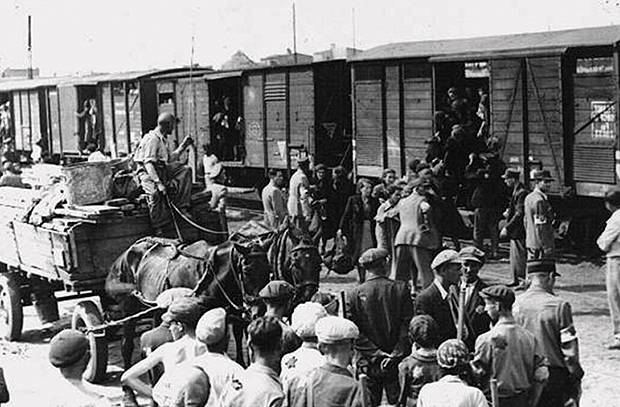 Deportation of the Crimean Tatars is again becoming an instrument of propaganda.

18 of May 1944 of the year pursuant to the resolution of the State Defense Committee No. 5859CC “On the Crimean Tatars” began the forced relocation of the Crimean Tatars to the Uzbek, as well as the Kazakh and Tajik Soviet Socialist Republics. The operation went swiftly - it was originally planned to be held in 12 – 13 days, but already on May 20, Deputy USSR Commissar of Internal Affairs Serov and Deputy Commissar of State Security of the USSR Kobulov reported in a telegram to the national commissar of internal affairs Beria: “The operation to evict the Crimean Tatars was completed today, 20 May, in 16 hours. 180 014 people evicted, shipped to 67 echelons, of which 63 echelon has 173 287 people. shipped to destinations, the remaining 4 echelons will also be shipped today. ”

The deportation of the Crimean Tatars, who had the opportunity to return to the Crimea only after half a century, still remains a convenient ground for a variety of speculations. This time, the effect was further enhanced by the Eurovision media resource, which was won by a Ukrainian representative with the song “1944”. Its text was more than politicized, although the leadership of the competition, where political declarations are, as it were, prohibited by the regulations, considered it neutral.

Vigilant of all, the calendar was watched by the "friends" of Russia. The Turkish Foreign Ministry on the morning of May 18 issued a statement in which it was pathetically stated that "the occupation and illegal annexation of" Crimea by Russia "opened deportation wounds." Representatives of Ankara threatened that Turkey "will not allow to forget the pain of the shameful policy aimed at the destruction of an entire people," and will continue to support the Crimean Tatars in "their peaceful and fair struggle."

“On the anniversary of the deportation of the Crimean Tatars, which became a“ black page ”in stories of humanity, we condemn the fact of ethnic cleansing, ”the Turkish Foreign Ministry concluded.

It is curious that Turkey decided to condemn the fact of ethnic cleansing, which stubbornly resists the recognition and even mention of the Armenian Genocide on 1915, on its territory - the second most studied act of genocide in history after the Holocaust. There are good reasons for this - the Armenian genocide had a lot in common with the extermination of Jews in the Reich, even medical experiments on Armenians, which were called “harmful microbes” in official documents. The main promoter of this policy was Dr. Mehmet Reshid, the governor of Diyarbekir, who was the first to order horseshoes at the feet of the deportees. The Turkish encyclopedia 1978 of the year characterizes Reshid as a “wonderful patriot”.

Turkey spends significant funds on PR campaigns on “denial”, including making generous donations to universities. And when the issue of recognition of the genocide by the parliaments or governments of different countries is actualized, Ankara threatens them with diplomatic and trade sanctions.

In Kiev, the anniversary of the deportation was covered as expectedly widely. It is necessary to note the constant attempts to tie the definition of “genocide” to the deportation of the Crimean Tatars and somehow to blame, by complex semantic manipulations, what has happened in modern Russia.

President of Ukraine Poroshenko personally took part in the “requiem commemoration meeting of the victims of the deportation of the Crimean Tatar people,” where, by tradition, he declared himself a Crimean Tatar as a sign of solidarity.

And he made a sensual speech, where he tried as much as he could to incite ethnic hatred in the Russian Crimea. “The so-called friendship of the peoples in Moscow”, according to Poroshenko’s text, flowed into the “Russian occupational temporary authority”. And “Stalin’s grandchildren who deserve their ancestor,” the Ukrainian leader said, “reanimate the policy of genocide.” Since “capital, authorities and flags changed in Russia, kings, general secretaries and presidents ... from the time of Catherine II, Petersburg and Moscow invariably persecuted the Crimean Tatar people. This is a constant in the policy of Russia of all regimes, ”Poroshenko proclaimed.

His speech was accompanied by widespread activities of a smaller caliber, one way or another pedaling the theme of the everlasting alliance of Ukrainians and Crimean Tatars against a permanent enemy - Russia and the Russians.

All this activity was supported by a wide variety of media, including the BBC and Radio Liberty. 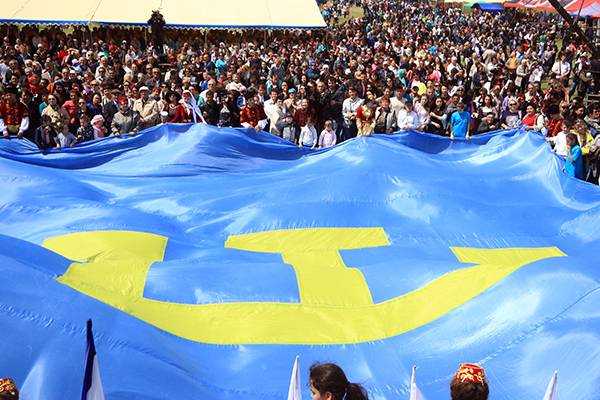 During the rally dedicated to the next anniversary of the deportation of representatives of the Crimean Tatar people from the Crimea. Photo: Alexey Pavlishak / TASS
Causes and Effects

At the same time, the facts are such that the deportation of 1944 of the year was, perhaps, the only possible action under those conditions, which certainly had nothing to do with the genocide or the attempt of it.

If during the perestroika and post-perestroika period it was possible to refer to a certain closeness of the archives and the lack of access to the necessary data, thanks to which fantasies and speculation were not restrained by anything, then by now the situation has changed. Information on the course of the deportation and, most importantly, the reasons that led to it, is available to any researcher.

The Crimean Tatar of the period of the Great Patriotic War could not be considered a model of a loyal Soviet citizen. With a total population of 200 thousands of people (the pre-war Tatar population of Crimea was less than 20% of all inhabitants of the peninsula) according to the certificate of the High Command of the German ground forces from 20 in March 1942, in the service of the Reich consisted 20 of thousands of Crimean Tatars, that is, almost all mobilization call-up population. Most of these 20 thousands deserted from the Red Army.

This circumstance was one of the key points in the letter to Beria to Stalin No. 424 / 6 of 10 in May 1944 of the year, which also stated that the German fascist occupiers created an extensive network of "Tatar national committees," whose branches "widely assisted the Germans in organizing and putting together from among deserters and Tatar youth of Tatar military units, punitive and police units for action against units of the Red Army and Soviet partisans. As punitive and police Tatars were particularly brutal. "

Tatar National Committees took an active part, along with the German police, in organizing the hijacking of more than 50 thousands of Soviet citizens in Germany: they collected money and things from the population for the German army and conducted treacherous work on a large scale against the local non-Tatar population, oppressing it in every way. The activities of the "Tatar National Committees" were supported by the Tatar population, "to whom the German occupying authorities provided all sorts of benefits and incentives."

Considering all the above, the Soviet leadership was faced with a non-trivial task: how to react. Committed literally before the eyes of the rest of the non-Tatar majority of the population of the peninsula, it was simply impossible to ignore and unleash the brakes. The absolute majority of non-Tatars perceived their neighbors as criminals and often blood enemies. The situation could well turn into a real genocide, and a spontaneous one.

It was also problematic to act in accordance with the letter of the law - all solutions to such situations prescribed in the laws were again reduced to actual genocide. According to article 193-22 of the then Criminal Code of the RSFSR, “unauthorized abandoning of the battlefield during a battle, surrender that was not caused by the combat situation, or refusal to act during the battle weaponsas well as going over to the side of the enemy entails the highest measure of social protection with confiscation of property. ” If the Soviet government decided to act according to the law, then the majority of the Crimean Tatar adult male population would have to be shot.

As a result, the deportation was chosen, which, contrary to myths, was carried out with the greatest possible comfort at that time. Although the observance of human rights in their modern sense was not really a question: in the courtyard, we recall 1944 a year.

It is also noteworthy that during the three-day deportation 49 mortars, 622 machine guns, 724 machine gun, 9888 rifles and 326 887 ammunition guns were seized from the “special contingent”.

The deportation of the Crimean Tatars and the events that caused it do not refer to those pages of national history that are called glorious, but one should not forget the lessons of history. For this reason, events in the Crimea itself were far from being as demonstrative as those of foreign "sufferers." The Government of the Republic of Crimea has opened the first stage of a memorial memorial at the Lilac station in the Bakhchisaray district. The head of the Crimea, Sergey Aksenov, said that "the complex will be crowned with a mosque and an Orthodox church as symbols of unity not only of two religions, but of all denominations on the peninsula."

Ctrl Enter
Noticed oshЫbku Highlight text and press. Ctrl + Enter
We are
Beria is the protagonist of the USSR atomic projectDeportation of the Crimean Tatars. how it was
Military Reviewin Yandex News
Military Reviewin Google News
31 comment
Information
Dear reader, to leave comments on the publication, you must sign in.