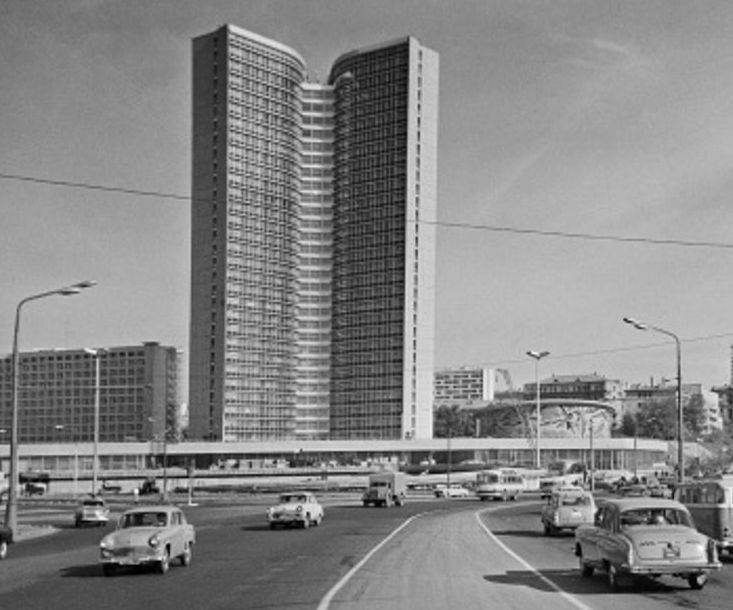 The building of the CMEA in Moscow. Early 1970's
The transfer ruble, which has been in effect since January 1964, is a collective unit of account, the collective currency of the CMEA countries, intended to serve the system of their multilateral settlements. Introduced by agreement signed on October 22 1963 by the governments of Bulgaria, Hungary, GDR, Mongolia, Poland, SRR, USSR and Czechoslovakia. After joining the CMEA, the Republic of Cuba and Vietnam also joined this agreement.

Calculations in the PR began from January 1 1964 of the year through the International Bank for Economic Cooperation (IBEC) by transferring the funds expressed in them from the account of one country to the account of another. The gold content of the transferable ruble was established in 0,987412 of pure gold. PR was a unit of account and served as the scale of prices of goods in the mutual trade between the CMEA countries.

In a specific subject form (for example, in the form of banknotes, treasury notes or coins), the transfer ruble was not circulated. The source of receiving the transferable ruble for each country was the crediting of the import of its goods and services by the countries participating in the multilateral payment system. The basis of the settlement system in transferable rubles was formed by the multilateral balancing of commodity deliveries and payments.

At the time of the emergence of a new system of international accounting units, the value of a SDR unit was tied to gold and amounted to 0,888671 g of pure metal, which corresponded to the value of 1 US dollar. The first release of the CRA launched 1 on January 1970 of the year. Then, some have assumed that over time, the SDR will become the main global currency. However, today the volume of SDRs is extremely small, the share of this monetary unit in international reserves of all countries of the world does not exceed 1%.

From time to time, various politicians and officials make statements that the condition for overcoming the current crisis of international finances is a sharp increase in the issue of SDRs by the International Monetary Fund, which SDRs should become world money. Such statements were made, for example, by the recent IMF director Dominique Strauss-Kahn.

Of course, such proposals are in contradiction with the interests of the main owners of the “printing press” of the Fed, who by all means struggle to preserve the status of international money by the US dollar. It was at the direction of the owners of the Fed, Strauss-Kahn, expelled from the fund and destroyed politically.
Ten years later (after the SDR), a supranational ECU unit appeared in Europe, and in 1992, a supranational currency called the euro (Maastricht Agreement) was born within the European Union. Initially, it was intended only for international non-cash payments. For some time, the euro currency unit coexisted with the national currency units, but later the national money was abolished.

Today, the 17 states of Europe, which constitute the so-called Eurozone, use the euro both for international settlements and for internal circulation.
If you compare the euro with the transferable ruble, you should note that the latter did not rule out and did not limit the use of national money by the CMEA member countries. There was no encroachment on the national sovereignty of the countries participating in the union.

The PR was in international circulation for 27 years - from 1964 to 1990 a year. The scale of the use of PR in those days was immense. The total volume of transactions and operations using a new type of currency for the specified period amounted to 4,5 trillion transfer rubles, which is equivalent to 6,25 trillion dollars.
The use of PR is constantly increasing. If in the first five years of PR existence (1964 – 1969 years) the volume of operations was 220 billion units, then in the last five years (1985 – 1990 years) it is already 2100 billion units (equivalent to almost 3 trillion dollars). 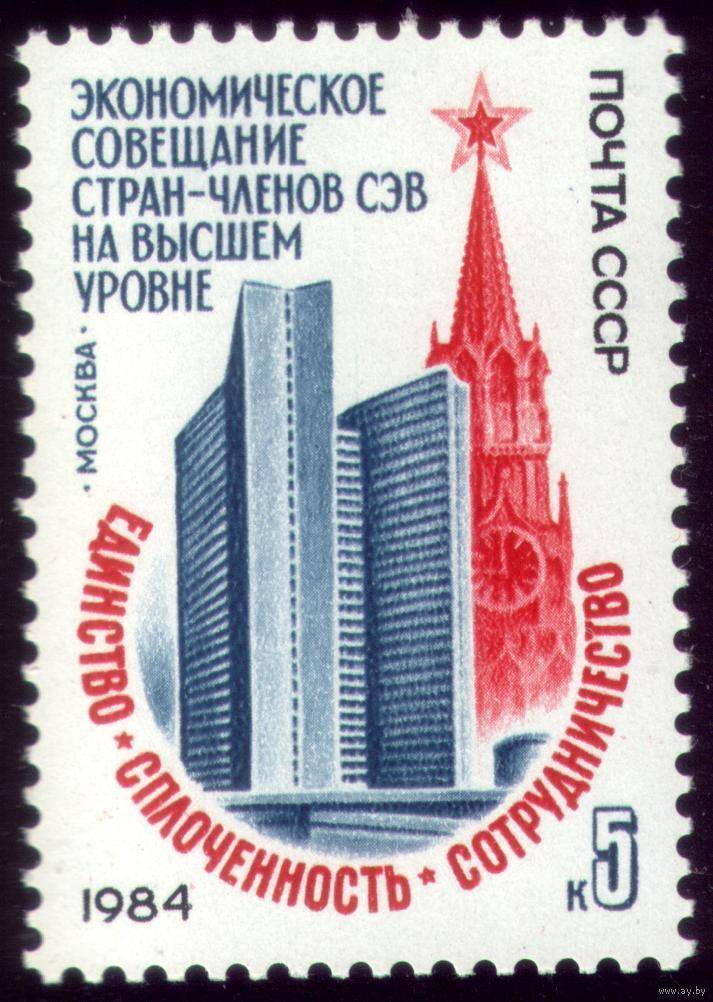 Postage stamp dedicated to the Economic Conference of the CMEA member countries at the highest level. 1984 year
Therefore, over 5% of international trade in the world in the last five years of the existence of the CMEA was provided with the help of a transferable ruble.
In transferable rubles, the cost indicators of contracts for the supply of goods, the provision of services, the implementation of construction and other works were expressed, estimates and feasibility studies of many joint projects were drawn up.

Secondly, the transfer ruble was the currency of payment. The corresponding amounts were transferred from the accounts of buyers (importers) and customers and credited to the accounts of sellers (exporters) and contractors. Payment transactions were carried out with the participation of the IBEC.

Thirdly, the transfer ruble is credit money. They fell into circulation in the form of loans of some countries to others for the supply of goods and for investment projects. Consequently, with the help of PR, the debts and obligations of countries and individual enterprises and organizations, participants of trade and economic relations were expressed.

It is noteworthy that in the framework of the CMEA countries sought to ensure the most balanced trade in order to prevent excessive accumulation of debts of individual countries in transferable rubles.

In addition, with the help of PR, the capital of such international banks as IBEC and the International Investment Bank (IIB) was formed, and the activities of a number of international organizations in the framework of the CMEA were financed. 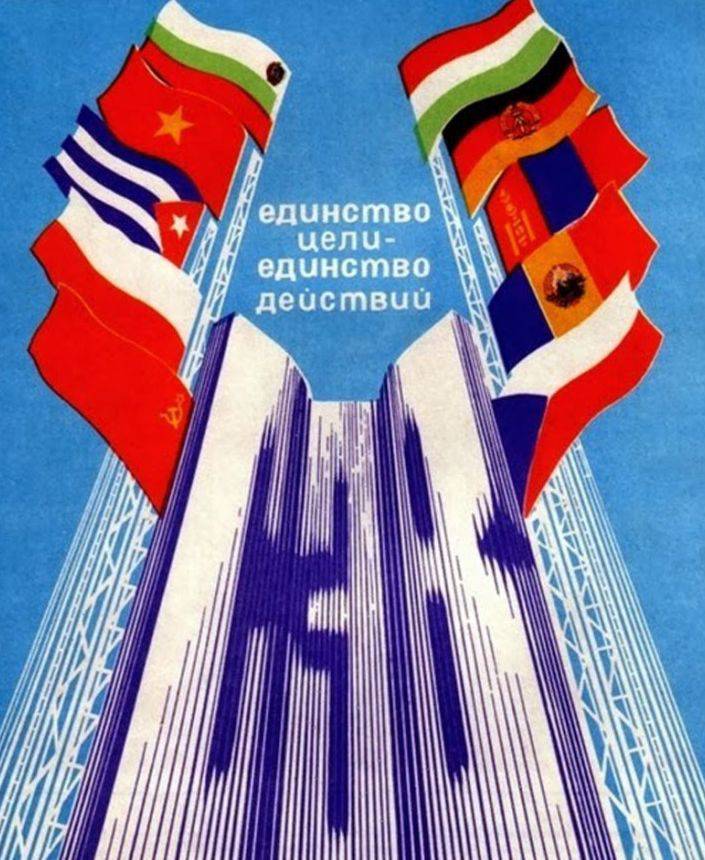 Soviet propaganda poster
Just as the national currencies of the CMEA member countries could not participate in international settlements, the transfer ruble could not under any circumstances be used in the internal circulation of these countries.

How is this tool useful? He helped the economy to maintain independence from Western markets, from international crisis processes. 1960's experience does not need to be copied, but it is necessary to use it to our advantage.