Papua has reached the Arab Spring 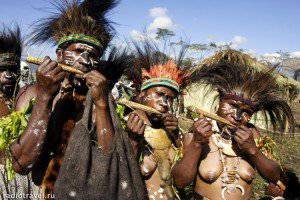 Political instability in Papua New Guinea, the state of Oceania, may enter a hot phase. The positions of Michael Somare, the former prime minister of the state, who is trying to retain power, have sharply shaken, while the influence of Peter O'Neill, his opponent, has dramatically increased. Army and police units are in a state of division.

In the capital of the state of Port Moresby, mass actions are held by supporters of both groups claiming power. The most important areas of the city are controlled by armed men in uniform. It has not yet come down to serious clashes, but in the event of continued persistence by politicians, everything can change dramatically.

Recall the political crisis began in June 2011, when, on behalf of the 75-year-old Somare, the family announced his resignation. The reason was the long absence of the prime minister, who is in Singapore for treatment. 2 August, Jeffrey Nape, speaker of parliament, announced that the post of prime minister was vacant, after which Peter O'Neill, the former finance minister, was elected leader of the country.

However, Somare, who was already “buried” by many in his homeland, unexpectedly “rose again” for everyone. After recovery, the biased politician declared that “there has never been a vacancy for the Prime Minister,” and filed a lawsuit with the Supreme Court. The decision of the parliament was declared invalid by the court. As a result, in Papua New Guinea, the political crisis has noticeably worsened. In the capital, began to hold demonstrations against the verdict of the Supreme Court. Some of the protesters described what was happening as “our Arab spring against the ever ruling Somara.” Although this interpretation of events is quite controversial, as Somare’s competitors do not yet strive to fundamentally change the state system.

However, according to the laws of the country, Michael Oggio - the governor-general of Papua New Guinea - was to re-swear Somará. The ceremony was scheduled for December 20.

In this situation, it would seem that the last word should be left to the governor-general of the state, approved by the British queen, and he confirmed the “re-election” of Somare.

But on December 13, the decision of the Supreme Court was considered illegal by the deputies of parliament, since it "contradicts the country's Constitution." Jeffrey Nape pointed out that only O'Neill's government is recognized as legitimate by parliamentarians. The behavior of the deputies began to resemble an open rebellion.

Peter O'Neill, meanwhile, continued to count on the support of the governor-general. That would give him legitimacy. Support from the governor-general was needed to obtain approval from Western countries and their allies, primarily Australia - the main satellite of Great Britain and the United States in the region.

The fact is that Papua New Guinea is part of the British Commonwealth. The formal head of state is Elizabeth II, Queen of Great Britain, represented in the country by the Governor-General. He is appointed by the Queen on the proposal of the PNG Parliament.

For some time, Peter O'Neil was unable to establish relations with the Governor-General, as the approaches to his residence were blocked by police officers loyal to Somar. Periodically, they fired into the air, so the leader of the rebels could not even get an appointment with Michael Oggio.

It should be noted that Michael Thomas Somare is one of the main creators of the independence of Papua New Guinea. In 1975, he became the country's first prime minister. This happened after a long and stubborn confrontation with Australia. However, his stay in power was cloudless. Freed from colonial oppression, Papua New Guinea was simultaneously freed from the means of the colonialists. The country in terms of economic development was in the last places in the world ranking. To develop the subsoil and develop the logging business, huge funds were required.

All this became an additional stimulus to the discontent of many Papuan leaders, who managed to get used to the joys of civilization brought by Australian businessmen. And in 1980, he was sacked by parliamentarians. Since the situation has not only not improved, but has also deteriorated significantly, in 1982, he again headed the country. In 1985, Somare was forced to leave again, but he headed the Foreign Ministry. From a new post it was periodically removed and reappointed. Finally in 2002, he re-occupied the prime minister’s chair. During the reign of Somare, he showed his desire to preserve the traditions of the indigenous people. This caused some discontent among many Western missionaries.

Currently, there is a dual power in Papua New Guinea, as there are alternative governments in the country that do not recognize each other. However, now the balance has begun to lean toward the opponents of Somar. The governor-general, who initially supported the latter, changed his decision to 20 December: "I now recognize the legitimacy of the O'Neill government ... The role of parliament is paramount. Only parliament can decide who should hold the post of prime minister."

However, even this did not diminish Somare’s determination to fight for power. However, as the well-known traveler Krotov told the Pravda.Ru correspondent: “From personal conversations conducted with simple Papuans, it is clear that they do not like any kind of power. Almost all officials, including Somar, are spoken about as thieves, unmatched. " So Somare can hardly count on the support of ordinary people.

In neighboring Australia, what is happening has caused considerable concern. According to Kevin Rudd, the head of the Ministry of Foreign Affairs of this country, they are “deeply concerned about the situation that has arisen; nobody has benefited from the violence”. The concern of the Australian politician can be understood. Unrest in Papua New Guinea is fraught with significant costs for both Australian business and global markets. And not only for the logging industry.

Papua New Guinea in recent years has significantly increased its presence in world markets as a producer of precious and non-ferrous metals. This primarily concerns gold and copper. Not the last place in this issue is oil. For example, the shutdown of a single mine in the province of Bougainville, associated with the attacks of the separatists and the response of the central authorities, significantly affected the prices of non-ferrous metals.

Another example is the case of a recent decline in gold production in Papua New Guinea at one of Lihir Island’s mines. The decline due to the showers led to an increase in world prices for this precious metal by almost 3,5%.

If political instability drags on, it will lead to a limitation of gold mining in the country and cause a large increase in the value of this precious metal, and this will have a serious impact on the global economy. After all, Papua New Guinea already in 2001 took the 11-th place in gold mining and 13-th in copper mining. Over the next 10 years, the country only increased its market share in non-ferrous and precious metals.
Military Reviewin Yandex News
Military Reviewin Yandex Zen
8 comments
Ad