Project "ZZ". Small political prophecies: from the sanctions-2016 to the events of the year 3000

23 May 2016
29
British Prime Minister Cameron predicted Turkey’s accession to the EU around 3000. The NATO Secretary General, Mr. Stoltenberg, has a much closer planning horizon: he announced the Alliance’s future crucial decisions as early as the summer of 2016. French Prime Minister Manuel Valls also appreciated the near future: according to him, his country will be elected the main target of the Islamic State militants. The threat of terrorist attack is extremely high, he said. Another forecast appeared on the network, this time a collective one: at the same time, six officials from EU countries predicted the imminent extension of sanctions against Russia. 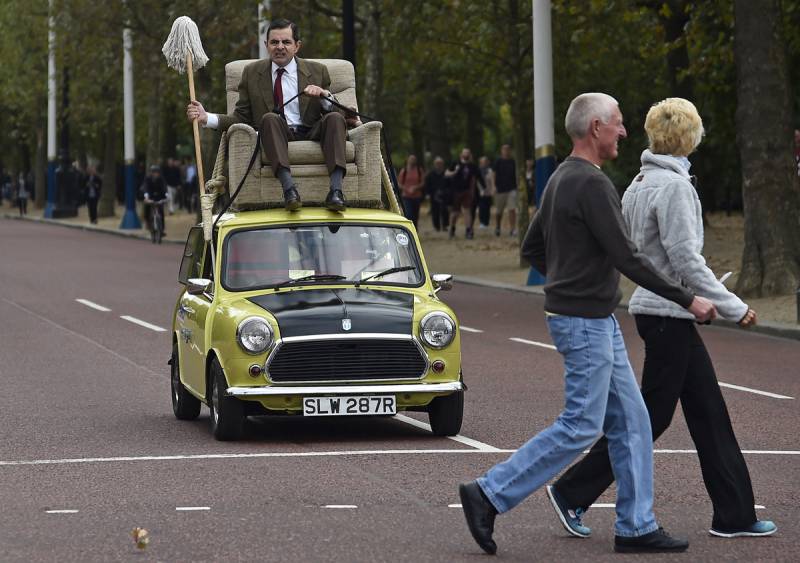 As transmits Sky News, David Cameron harshly criticized one of his ministers. We are talking about Penny Mordont, who occupies the post of Minister of Armed Forces. Cameron said that her message that the UK will not have the veto on Turkey’s accession to the EU is “misleading” and “absolutely wrong”.

The statement of the prime minister appeared against the background of rumors about the imminent invasion of Britain by hordes of bandits, murderers and terrorists from Turkey and Albania. They will reach for London if Brexit does not take place and Turkey enters the EU.

Penny Mordont insists that Turkey will join the EU over the next eight years, and the UK will not be able to block its entry.

David Cameron hotly objected to this. In an interview with ITV on Sunday, he said that the United Kingdom, like any other country in the European Union, has the right to veto the accession of another country to the union, and "this is a fact." Cameron also allowed himself a bit of irony, explaining that the place of Mordont is in the Ministry of Defense, and there "she does the work very well."

In addition, Cameron predicted the timing of Turkey's accession to the EU. According to him, Turkey is unlikely to join the EU in the coming years.

“They submitted the application in 1987 year. At the current rate of progress, they are likely to join around 3000 year. These are the latest predictions. ”

If Premier Cameron operated with remote forecasts, then NATO Secretary General Jens Stoltenberg chose to keep close planning horizons. The other day, he told the public about the upcoming crucial decisions of the Alliance, about which the world will learn already this summer.

The NATO Secretary General said that the final decision to increase NATO’s military presence in eastern Europe will be made at the next summit in Warsaw. International forces will send a clear signal to a potential enemy: an attack on one country will be regarded as an attack on NATO.

“Some allies of the United States, Great Britain and Germany, have already announced that they will be in the vanguard of strengthening these forces,” said Mr. Stoltenberg. He recalled that the United States had already doubled the funds allocated for these purposes.

The NATO Secretary General also said that the measures are part of a defense and deterrence strategy and do not provoke conflict. He added that the corresponding strategy has been used for almost 70 years.

True, the Secretary General immediately admitted that the current actions of Russia require a firm response from NATO, since Moscow with the help of the armed forces can "change the borders in Europe."

French Prime Minister Manuel Valls also appreciated the near future: according to him, his country will be elected the main target of the Islamic State militants.

The head of the French government, who visited Israel the other day, told in an interview BFM TV and I24, that the terrorist threat in the world "has never been greater", and this is particularly evident in relation to France. Waltz is confident that France, quite possibly, will become "the main target of terrorism."

He clarified that France will probably be “the number one target for“ Daesh ”. (...) The threat is still extremely high. She has never been taller. ”

What to do? Waltz called for an example from Israel. “Any country that is under threat,” he says, should copy Israel’s behavior onto “100%”.

Also, the prime minister said on TV: "I never lie to my compatriots."

“I never lie to my compatriots on relevant issues of internal security, because I was the Minister of the Interior,” he remarked, saying further that he was not speaking in order to “scare my compatriots”.

The clothes of the minor prophets tried on themselves and a whole team of European officials. About their prophecy told on the site «Bloomberg» Patrick Donahue and Henry Meyer.

The journalists led the “message” of six European officials from different countries. According to the latter, the punitive sanctions against the Russian Federation will soon be extended for another six months. The reason will be the stalemate in Ukraine: attempts to put an end to hostilities between the army and the pro-Russian separatists have come to nothing.

The decision to extend the restrictive measures will mean that the 28 of the EU member states believe that the lifting of the sanctions requires the full implementation of the Minsk Peace Agreement from the 2015 year. This was told to journalists four officials out of six. All persons wished to preserve anonymity. The four characters mentioned refer to countries where there is no unanimous support for anti-Russian sanctions.

The article indicates that the impasse in Ukraine has developed because of the question of granting more autonomy to the “separatist regions”.

The publication cites the words of French Foreign Minister Jean-Marc Hérault, who recently told Vladimir Putin about the desire to "lift the sanctions, at least gradually." However, for such a withdrawal, “some kind of movement is needed,” and it is not visible.

Recall the set time limit for trade and investment sanctions is 31 July 2016. To extend the sanctions can only be subject to a unanimous decision of the EU states. Most likely, the decision on the extension of the prohibitive measures, which the six anonymous officials simultaneously "predicted", will be adopted in the summer. Those EU states that are now showing dissatisfaction with sanctions will vote in the spirit of "united Europe".

The latter is especially important against the background of the growing popularity of Brexit and rumors about the imminent entry of Turkey into the European Union - countries that have been little popular in Europe in recent years because of the geopolitical unpredictability of Neo-Sultan Erdogan, who has entered the role of successful blackmailer.

However, British Prime Minister Cameron predicts a Turkish invasion of Europe no earlier than 3000 of the year. Unlike the former mayor, Boris Johnson, with whom, as they say, the prime minister fell out, Cameron would not want his country to leave the EU. Johnson, on the other hand, compares the united Europe with the former Hitler plans.

Thus, the unity of the EU in the coming months and years will be tested by two questions: Turkish and Russian. The prophets agree on this.