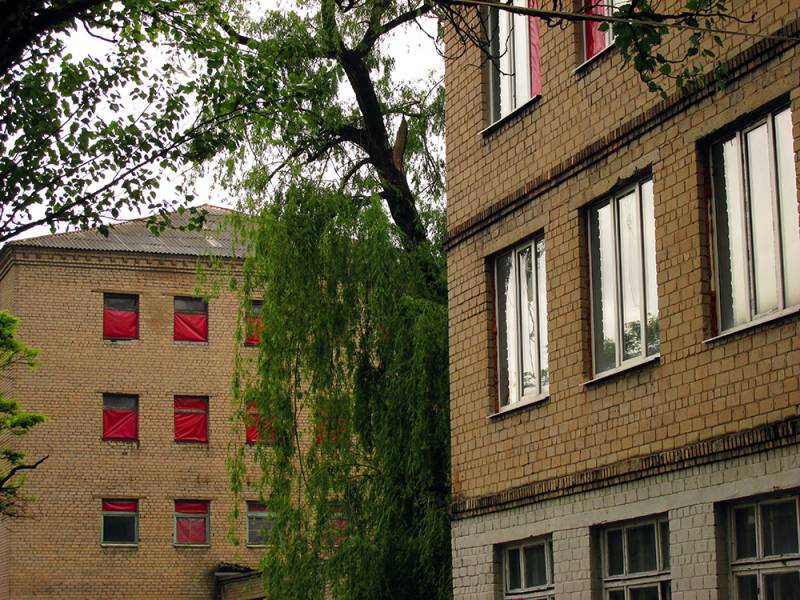 Petrovsky district of Donetsk is one of those who suffered and continues to suffer from shelling from the side of ukrohunta. Especially - that part of it which is called the Trudovskys. There is located Donetsk general education boarding school I-III levels №3. And less than a kilometer - already enemy troops.

Therefore, it is not surprising that in the boarding school half of the windows are sealed with what came to hand. Although relatively recently installed new windows - but behind the actions of enemies - those who like to bombard schools, homes, hospitals, kindergartens and much more - it’s impossible to catch. So these new windows are already in terrible tracks ... 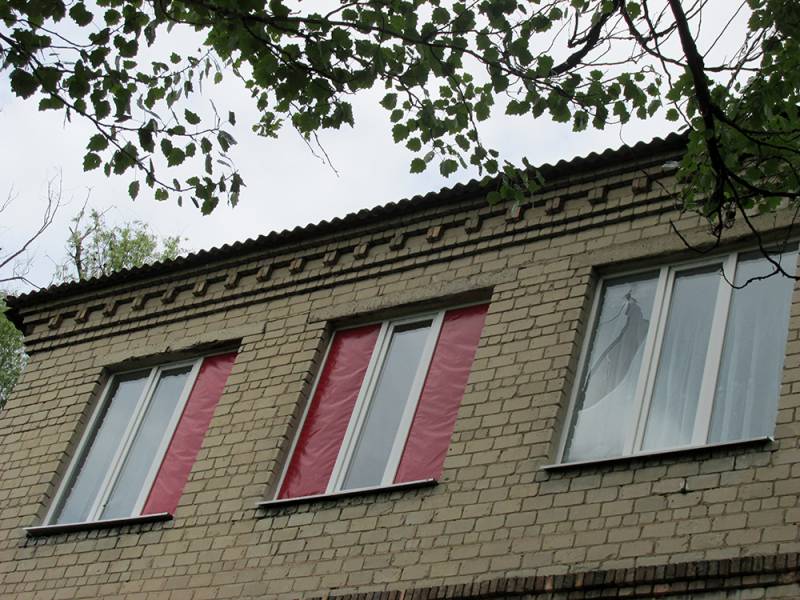 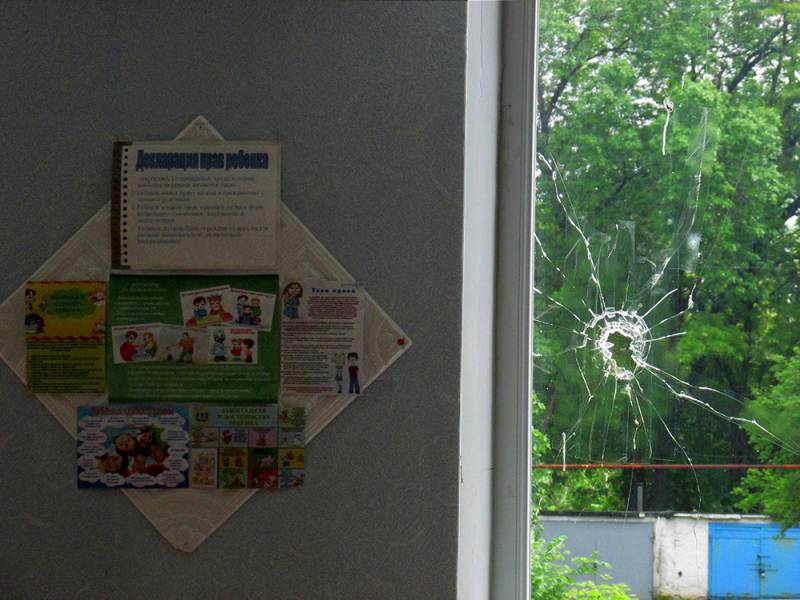 In the dining room - broken roof. Only by a miracle no one died when a shell fell there. 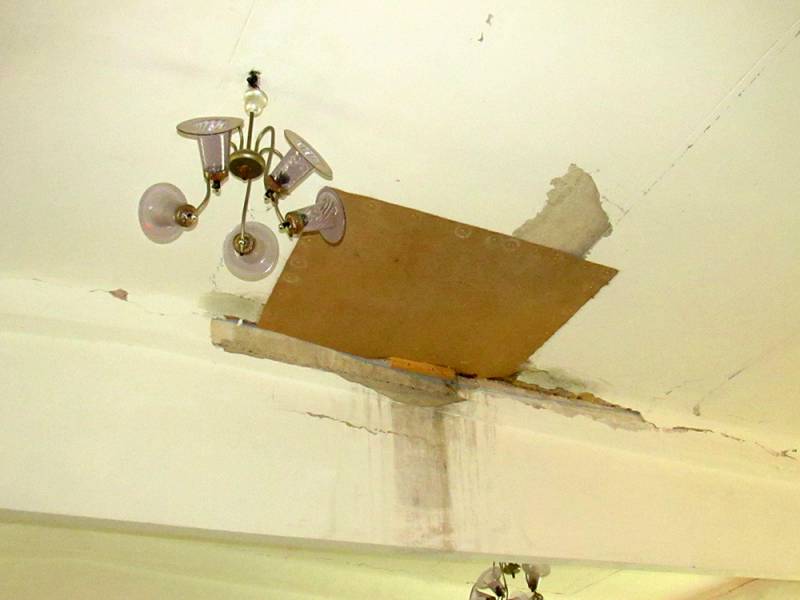 Last week, the Donetsk People's Republic was visited by a guest from Russia - four-time world champion in powerlifting Mariana Naumova. She is called the strongest girl in the world, as she, while doing bench press, has already set several world records in this area (in particular, she took 150 kilograms of weight). 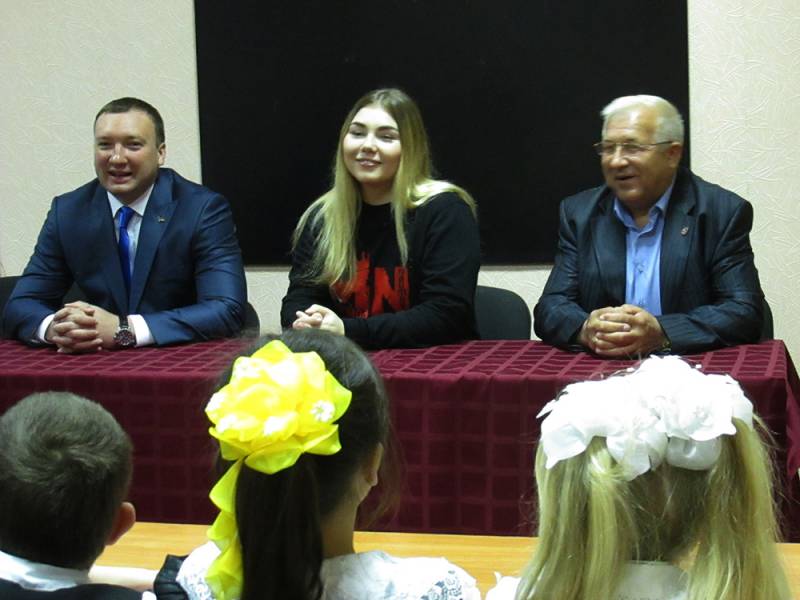 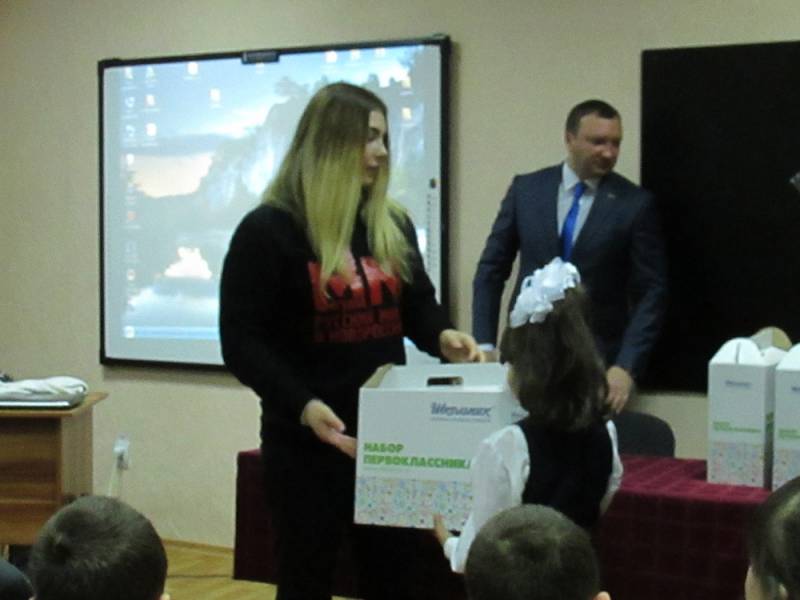 Athletes often have to go to international competitions. However, she and her father immediately
strongly supported the Donbass and visited the insurgent region in the autumn of 2014. The girl, despite her young age (at that time she was 15 years old), was immediately attacked by the wrath of the dill and those who supported them. She and her father were put on the shooting list of the notorious site “Peacemaker”. Mariana had the title of Master of Sports of Ukraine - and after a trip to the Donbass this title was taken away from her. In addition, problems have arisen with visas in some countries.

“I dreamed of visiting Australia,” the athlete tells the children who came to her meeting. There were competitions in which I wanted to participate. But I was not given a visa due to the fact that I went to the Donbass.

It is hardly possible to consider the situation when an athlete is not allowed to compete for political reasons, but, unfortunately, it is no longer a novelty that politics has entered the sport.

In addition, when Mariana went to competitions in the United States, her coach was not allowed there. “It was hard without him,” said the young champion.

She has visited Novorossia for the fifth time. Comes with humanitarian aid. Attends schools that are practically on the front line.

So the boarding school on Trudovskys is one of those whose children and staff are most difficult to survive. A guest from Russia brought back “first-grader kits” - everything you need to study. I met with the guys. Carefully inspected the consequences of the shelling, as well as children's drawings for the Victory Day. 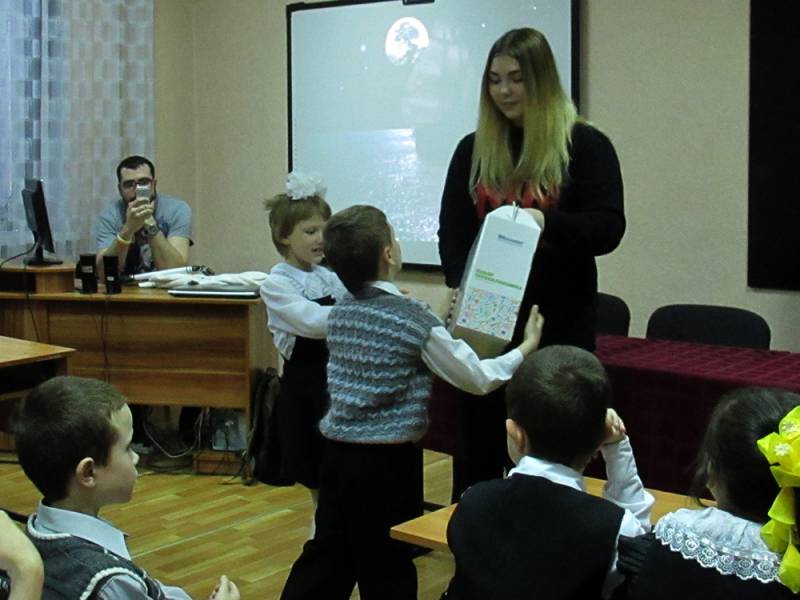 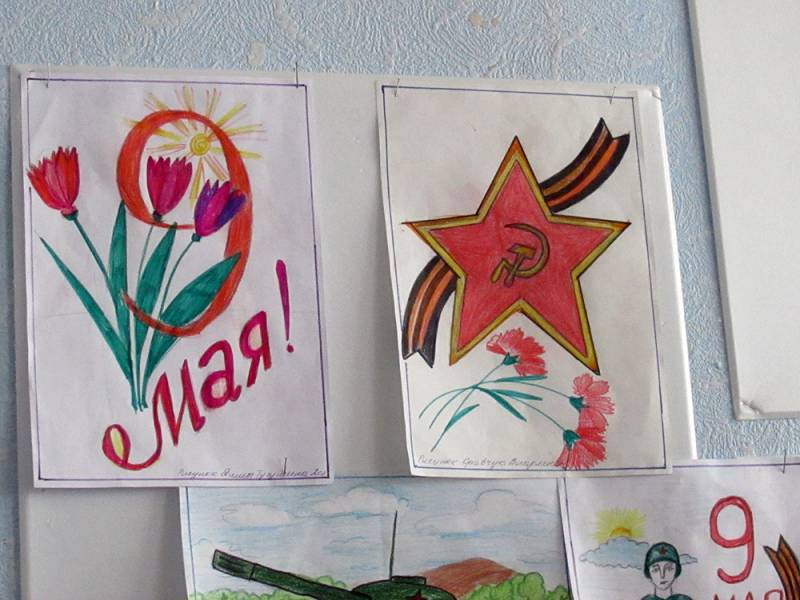 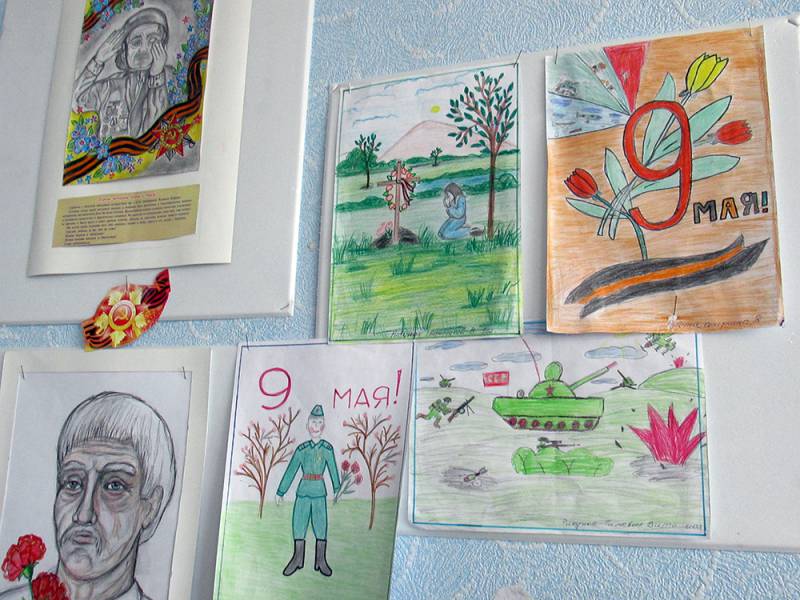 The school has its own heroes - those who are fighting today in the ranks of the DNR army. 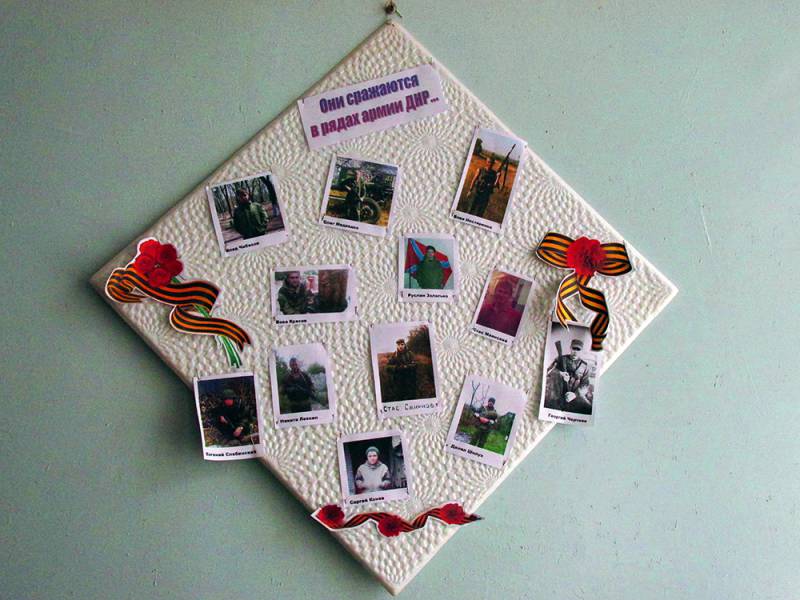 A portrait of one of the graduates - Sergey Baranovsky, 1977, born - hangs mournfully in the Memory Corner. Sergey participated in fights for the Donetsk airport. 24 January 2015, along with several comrades gone. For almost a month they could not find his living body or body, until after the signing of the second Minsk agreement, when the heavy fire stopped, the search continued. And February 15 found a terribly mutilated body ... Apparently, Sergei, together with several colleagues, was captured and tortured. And today the school in which this warrior was brought up, remembers him. 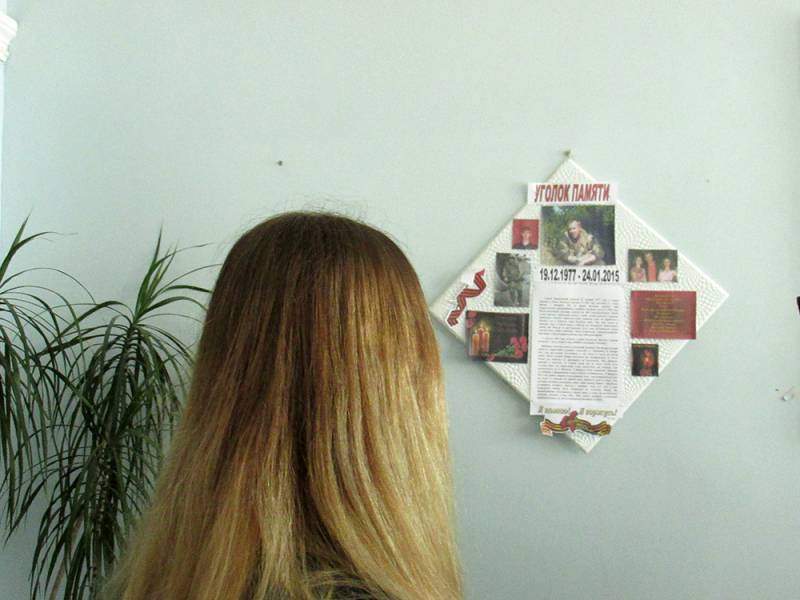 The most amazing thing is that, despite the difficult situation, on numerous arrivals, near the boarding school there are beautiful flower beds, a clean, well-groomed territory. 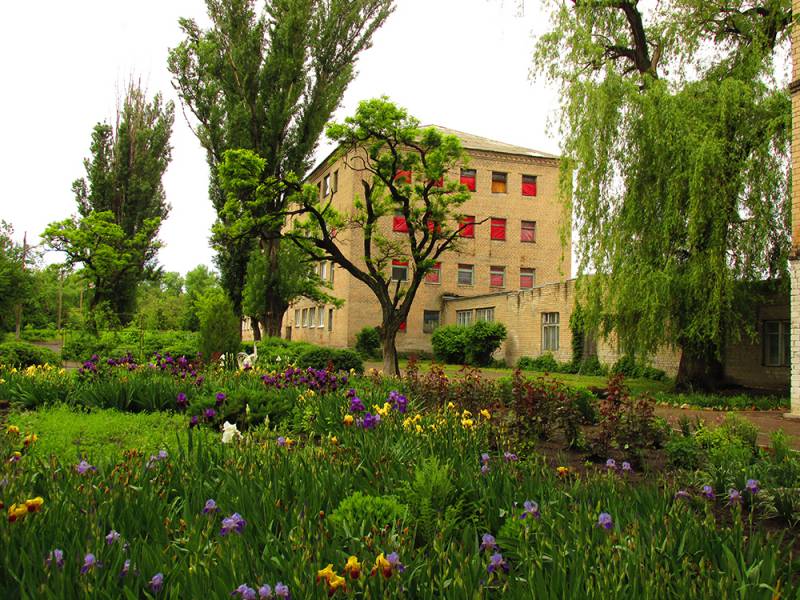 The Russian athlete visited another educational institution in the capital of the DPR - Donetsk Secondary School I-III grades No. XXUMX. In general, this is one of the best schools, but it is located in the Kuibyshev district, also not far from the front line. Therefore, in spite of the recent renovation, there are traces of war on it. 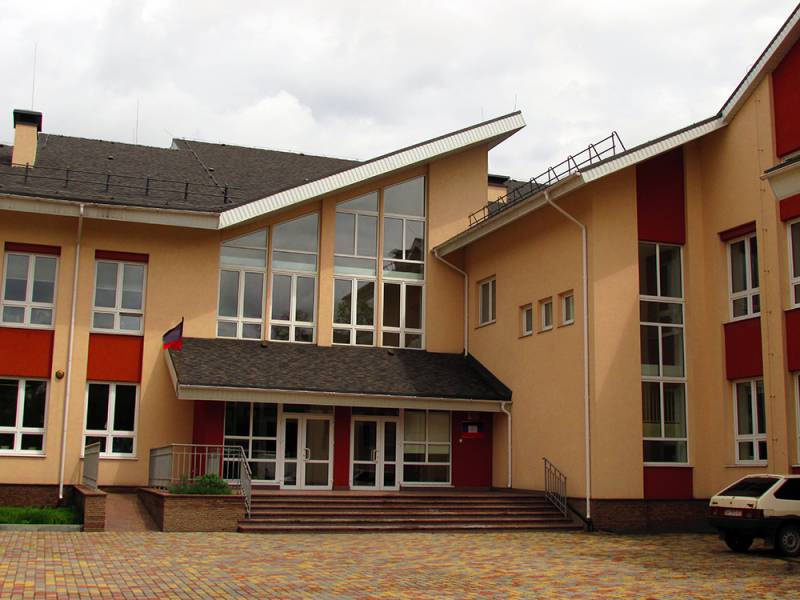 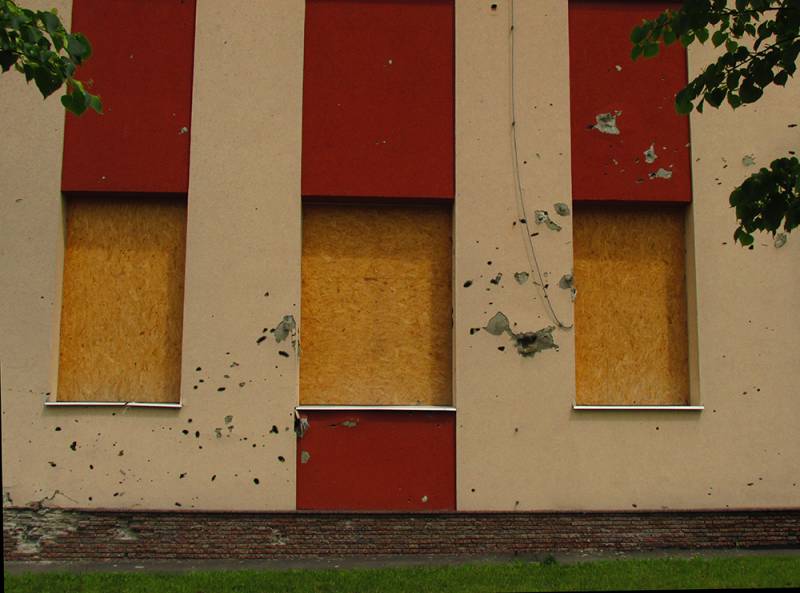 In November, 2014, this school suffered a terrible tragedy. Classes did not go there, but the guys came to the school stadium - to play football. The game was in full swing when the brutal shelling began. Two died - the eighth-grader Danil Kuznetsov and graduate Andrei Eliseev. Four more guys were injured.

In this school, Mariana Naumova held a powerlifting competition for boys and girls. Those who showed the best results received gifts from her - sets of sports nutrition. 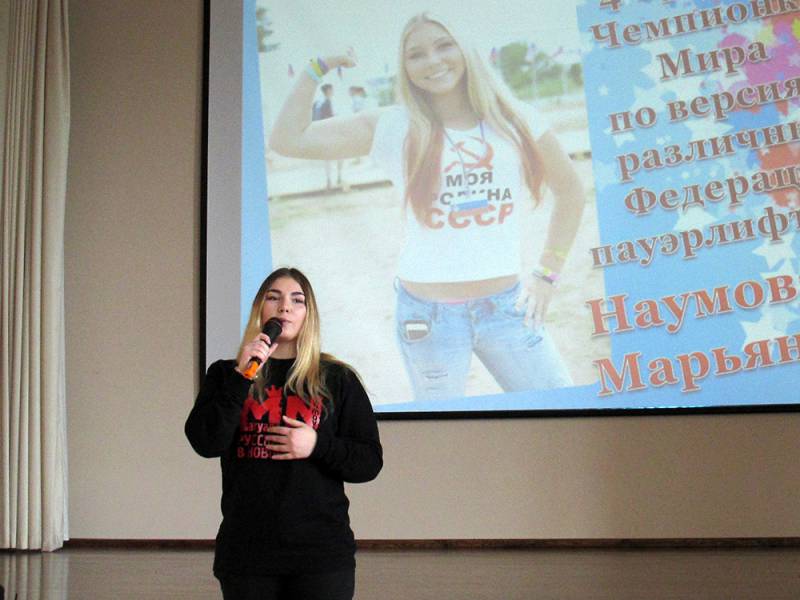 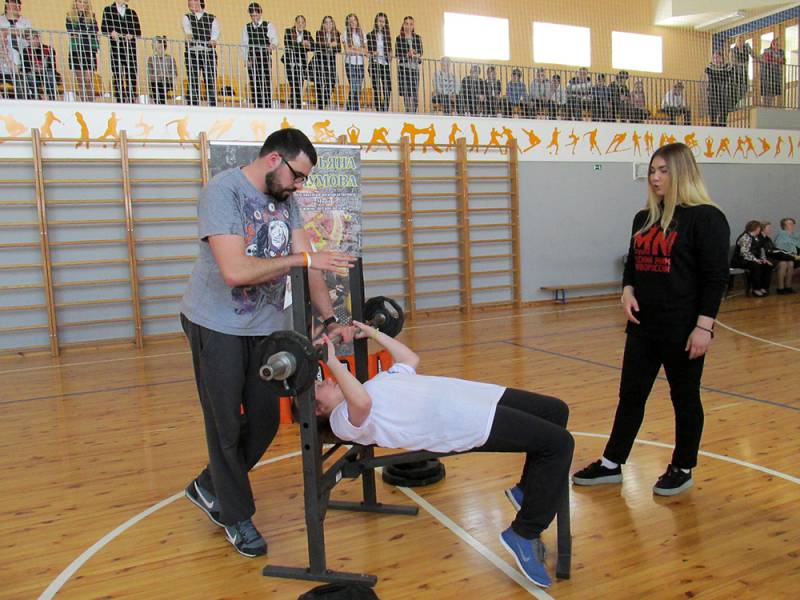 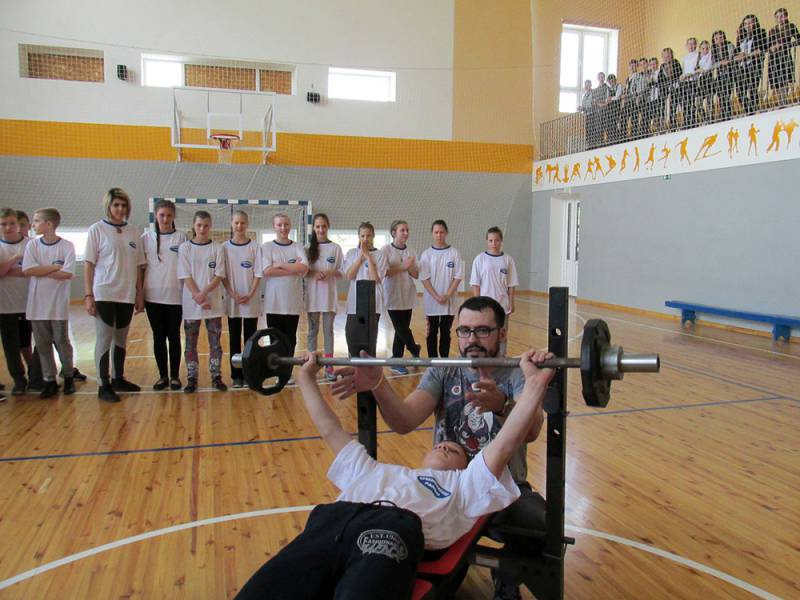 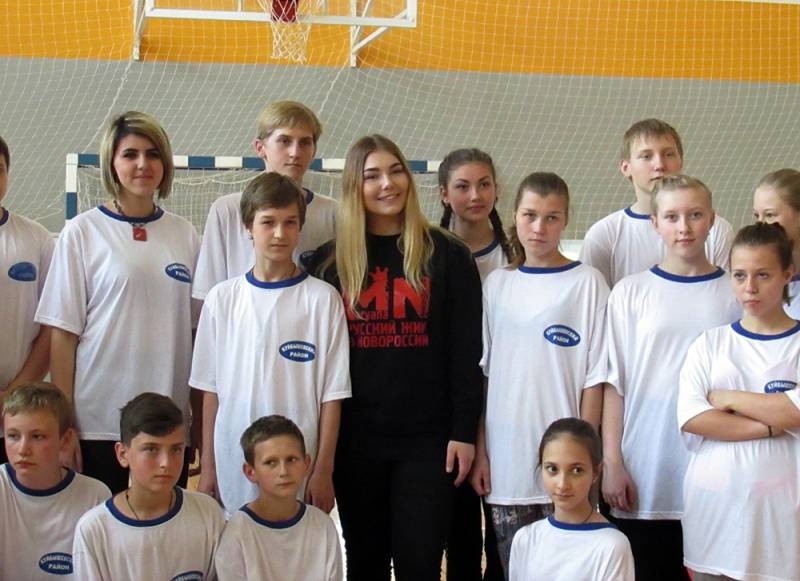 Mariana held similar competitions in the schools of the cities of Yasinovataya and Ilovaisk. 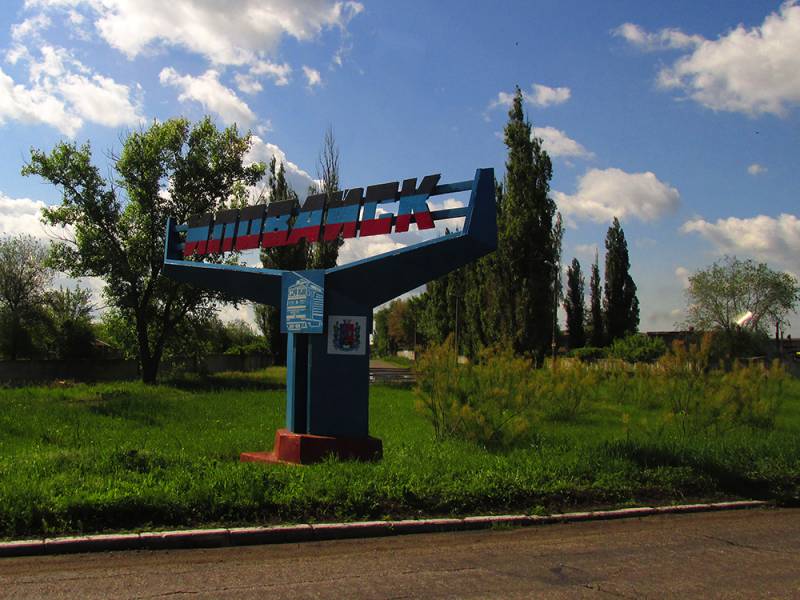 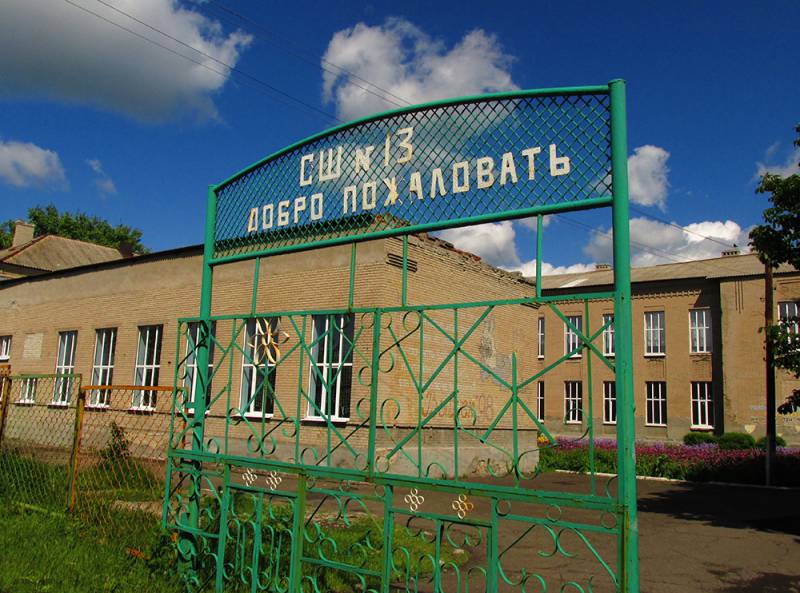 Ilovay secondary school №13 is located near the railway bridge, which was destroyed. But now on this bridge repair work is coming to an end. 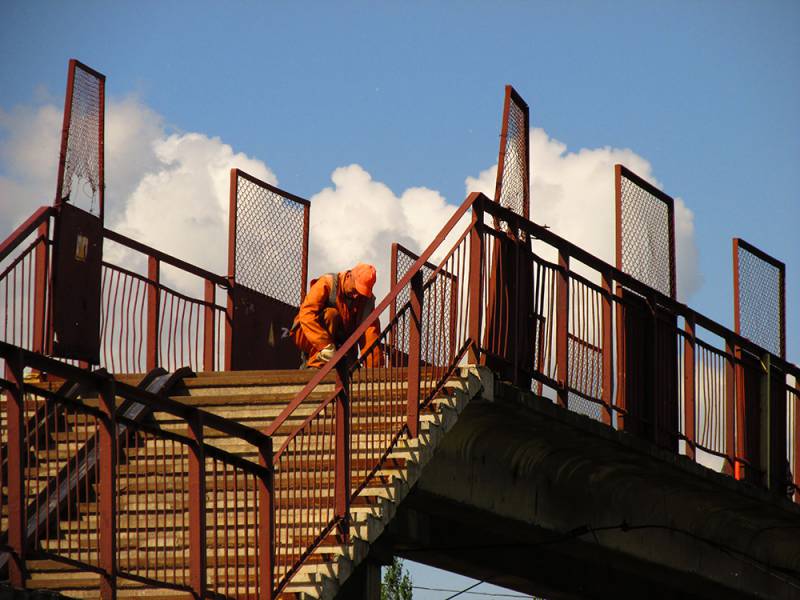 The school itself also received numerous injuries, but the holes were repaired, the windows were reinserted - classes continue. But not far from her, as the teacher’s guests were told, there is another school - №14. Everything is much worse there, it is impossible to conduct classes in it, and the children from it were transferred to the thirteenth. 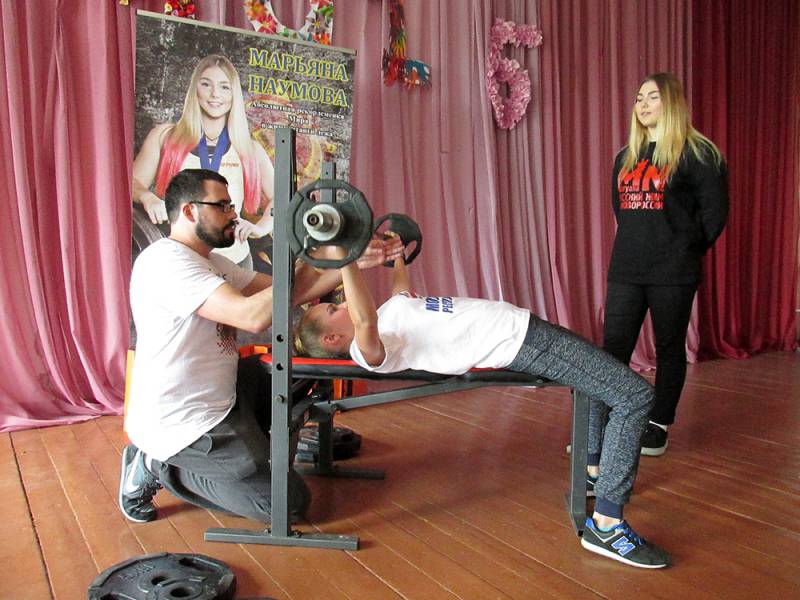 A drawing hanging on a stand was struck among the works submitted to the Republican competition “Children Draw Peace on the Planet.” Among the flames that devour the world, children ask for help. But only a few in the world today dare to render this assistance. 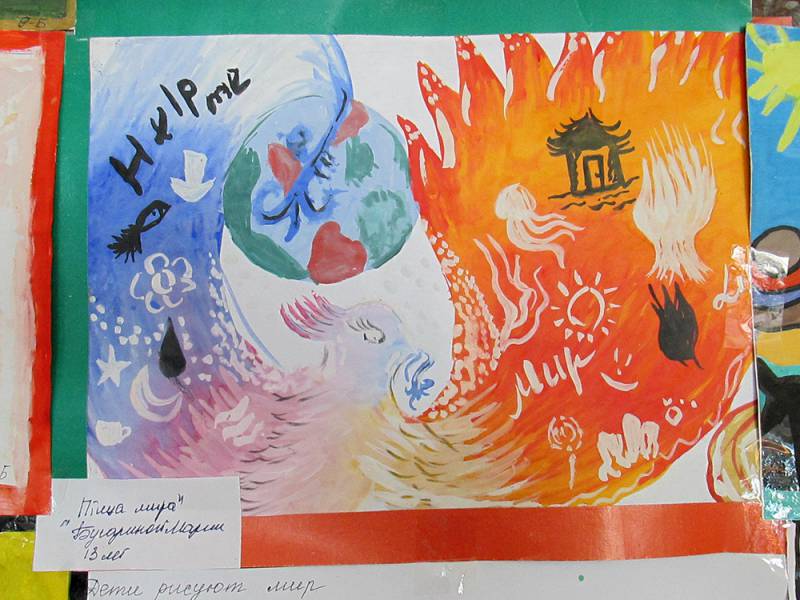 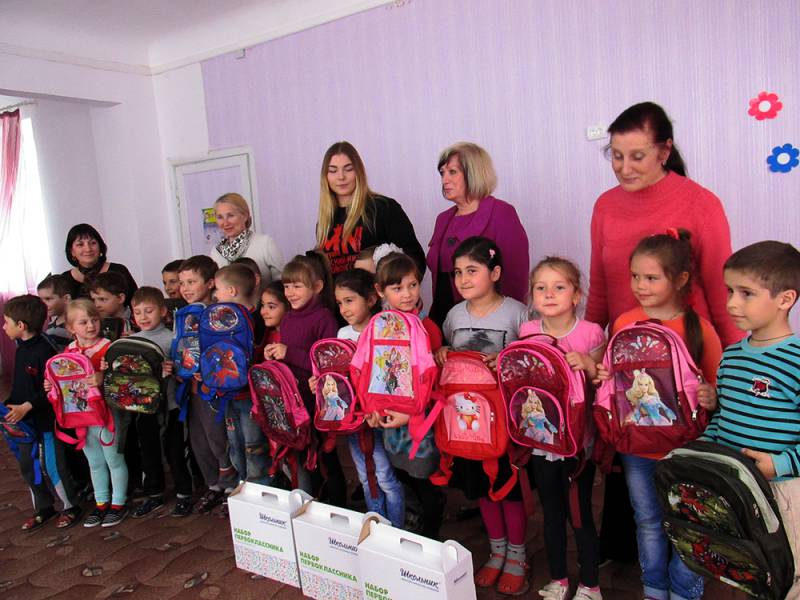 Of course, the Russian athlete managed to raise the mood of the children, to bring into their hard life at least a little joy. But, as mentioned above, in today's world, even such a noble mission can be followed by punishment, such as non-issuance of visas, etc. But those who gave the order to fire all these schools, freely romp around the world.

Ctrl Enter
Noticed oshЫbku Highlight text and press. Ctrl + Enter
We are
Situational analysis of the death of the MH17 flight (Malaysian Boeing 777), made on the basis of engineering analysis from 15.08.2014Joy and sorrow - in one harness
Military Reviewin Yandex News
Military Reviewin Google News
12 comments
Information
Dear reader, to leave comments on the publication, you must sign in.