To you but father visit


After many years of the sanctions regime against the Republic of Belarus and specifically its president, most of the sanctions were, as you know, lifted - a few months ago. One of the points of lifting the restrictions touched on the fact that the Belarusian leader, the European Union has now decided to “allow” to visit its territory. That is, from the non-handshaking “last dictator of Europe” (namely, such epithets with respect to Lukashenka were used by European officials at various levels), the Belarusian president turned into quite a handshake ... This is time. Two is that the EU has received a directive regarding the status of the “last dictator of Europe”. They say that it would be necessary to reconsider and, possibly, assign a completely different person to this role. More precisely, they have already appointed ...

After the abolition of the “lack of handshake” of Lukashenka, the lines of European politicians have not yet lined up to visit him, but the Belarusian leader himself outlined a circle of states that should be visited at the first stage of the European “rehabilitation”. The first two are the Vatican and Italy, with meetings with Pope Francis and Italian President Sergio Mattarella. 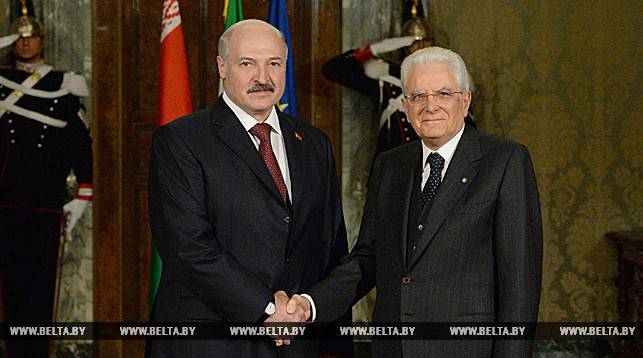 A visit to these countries took place just the other day.

The Pope said that he thinks of Minsk as a place of peace, and the Belarusian president, in turn, noted that he and Francis, it turns out, are “ideologically close”, adding (quote BelTA):

Come to us. You will get as much strength and health as anywhere in the world.

Continuing to develop the idea expressed by the head of the Roman Catholic Church about Minsk as a place of peace, Lukashenko expressed the words of invitation to Francis. Invitation to visit the Belarusian capital and meet with the patriarch. Then the president of the Republic of Belarus himself noted:

Everything is in the hands of the Lord. (...) I think that they will invite representatives of the Muslim world, Jews, and other confessions there.


In the course of communication with representatives of the Italian authorities, Alexander Lukashenko discussed with them questions of economic cooperation. In particular, they discussed the creation of an Italian technology park in the Brest region. In addition, Lukashenko and Mattarella talked about the transfer of the Italian experience of Belarus to the development of small and medium enterprises. Following the meeting, the Belarusian president summarized:

Italy has always supported us in the most difficult times. Italy and the Vatican (I thanked them for that) did a lot to ensure that we restored normal relations with the European Union. We spent some time with this, especially with the President of Italy. And this is the reason for my visit to this fertile and sacred land. I just had to thank these people for understanding what is happening in Belarus and for normalizing these relations. The conversation (with the President of Italy) was lengthy, and I am convinced that it ended on a positive note from the perspective. I am sure that the Belarusian people will soon see and feel these prospects.

In the general meeting were held quite friendly. Handshakes and sometimes even hugging each other. No mention of the old was observed.
In this regard, the question arises: if the European Union decided to lift the sanctions against the President of the Republic of Belarus and is now ready to do business with a man whom he watered with mud on any suitable occasion yesterday, does this mean that the leadership of Belarus has changed fundamentally? If it has fundamentally changed, then it is strange - not in a single Western report and report on increasing the level of democratization in Belarus (and these reports, like the words about democratization themselves - the sacred cow of the West - are dirty, hiley, almost without udder, but sacred ...) no word.
If there is not a word, then, it turns out that another directive came in - to keep silent, as they say, in a rag, hide the whip behind its back and at the same time pull out the gingerbread from the pocket at least partially.

In fact, this is evidence that the West for the same actions can impose sanctions and cancel them. Shouted about the absence of democracy in Belarus - the sanctions imposed. After a while, the presence of this very democracy in Belarus did not seem to be revealed, but the sanctions were lifted. And why? - Yes, because sanctions are a tool with which the West is trying to settle accounts, a sort of doll, which is twisted on the arm, depending on the desire of the West, to annoy anyone of the "partners".

One more question: does Europe need Lukashenko? May the President of Belarus forgive, but the answer to this question is unequivocal: it is not needed. Europe needs Belarus itself. She was needed with a view to luring Lukashenka with the help of Belarusian “Maidan” and establishing his “democracy”, but But father threw all Belarusian maydanutyhs on the side, “reassuring” those with riot police.

Now, realizing that Lukashenko is real for a long time, the West decided to probe Belarus on how to, in the presence of Alexander Grigorievich at the helm of the country, push its interests eastward. And the interests are not in the direction of Belarus itself, of course, but in the direction of Russia - to try to turn the Republic of Belarus into a kind of gateway through which you can try to enter the huge Russian market. At the same time, demonstrating the hard gingerbread of Lukashenka himself, the West will attempt to fashion a loyal politician from the “last dictator of Europe”. Will these attempts lead to success for the West? - the question is open, but attempts have already begun, and this is a fact. After all, the West by and large does not matter with whom to deal. They kissed Gaddafi - they destroyed Gaddafi, they embraced Yanukovych - they politically destroyed Yanukovych. Nothing personal, as they say ... The usual western political manner in which even terrorist structures are used to push Western interests in a particular region of the world. And if the politician himself does not mind making contacts with those who, as already noted, watered it with mud, then for the West this is the point.

Do you blame the Belarusian president for this? One could blame if Belarus were a self-sufficient state for all 100%. The Belarusian people are hardworking, economic, loves, when everything is on the shelves. But only in the modern world for the development of the country is not enough. We need resources, investments, bilateral contacts. And Lukashenka is looking for them. Moreover, Lukashenka was not born yesterday and not yesterday in politics. He is characterized by what he has the ability to skillfully turn everything in the right direction for him. Aware of the fact that the West does not need it as such, but it is interesting as an “intermediary link”, Lukashenka will do everything to get the most out of this situation. And then the grandmother said in two, who ultimately squeezed out of the situation more: the West from Belarus or Belarus from the West? Moreover, the West has something to lose, and But father lived under sanctions for years - and nothing ... survived - since the West needed it - two, has the opportunity to shake off the penalty, pursuing his favorite policy - three ...

If everything is so, then will the West itself fall on its own hook? ..

Ctrl Enter
Noticed oshЫbku Highlight text and press. Ctrl + Enter
We are
The Ministry of Defense is learning to fight in a new wayAlexander Lukashenko is preparing for the “Belarusian autumn”
Military Reviewin Yandex News
Military Reviewin Google News
69 comments
Information
Dear reader, to leave comments on the publication, you must sign in.