Today, the anti-torpedoes of the Russian ship complex “Package-NK” have the highest, in comparison with Western models, anti-torpedo potential, and thus provide a reliable defeat of the attacking torpedoes. 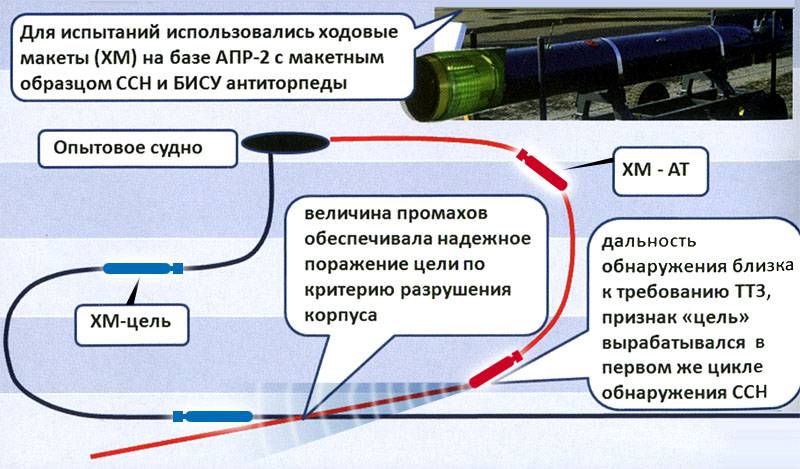 Tests of the mock-up of the anti-torpedoes at the Feodosia Naval Test Site, July 1998 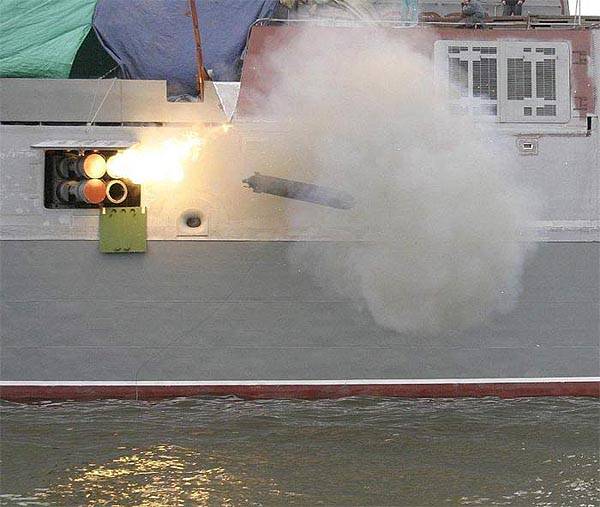 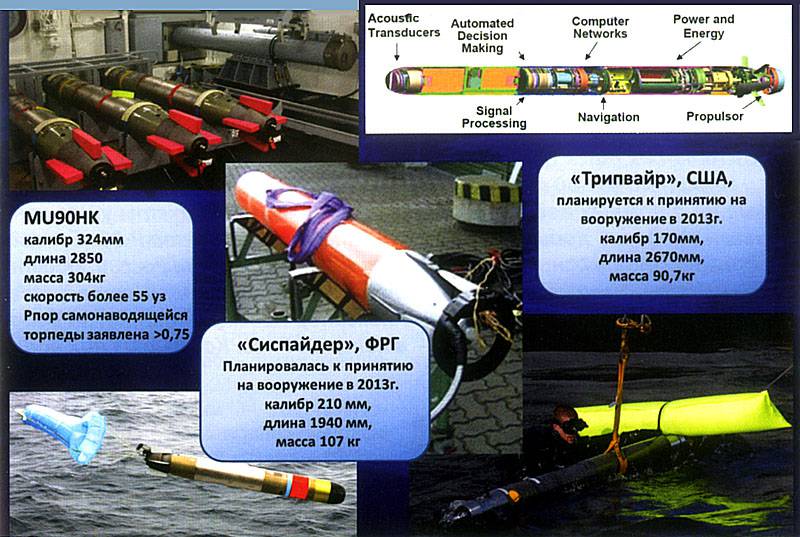 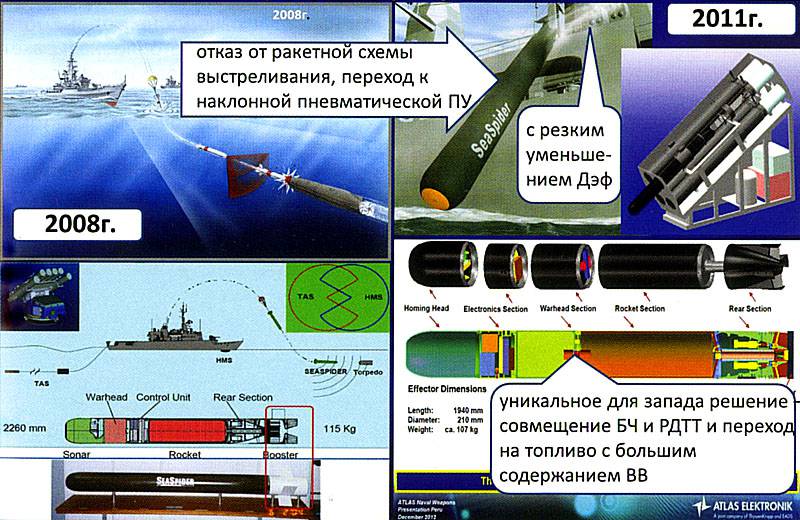 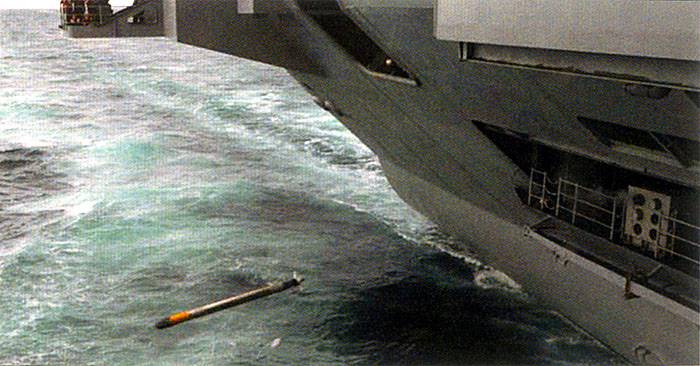 Start the anti-torpedo "Tripwire" from the board of the aircraft carrier "George Bush"
Research into the possibility of effectively hitting attacking torpedoes with counter-torpedoes was launched at the State Scientific and Production Enterprise "Region" in the second half of the 80s of the last century. Their foundation was the vast experience in the development of high-precision, with high tactical and technical characteristics, homing systems (HSS) high-speed aviation anti-submarine missiles - APR-2, APR-3, which were highly appreciated not only in the naval aviation of the USSR Navy, but also abroad.

The development of digital technologies allowed in the second half of the 1980-s to raise the question of the possibility of high-precision targeting of high-speed underwater weapons (anti-torpedoes) at a high-speed small-sized object (attacking a torpedo). In this case, the customer put extremely stringent requirements on the reliability of solving the problem of anti-torpedo protection (PTZ). Fulfillment of these requirements (the defeat of a torpedo by the criterion of "destruction of the hull") required the provision of very high precision of guidance and the use of a powerful warhead.

Initially, at the end of the 1980-x development was based on domestic digital microelectronics, and the first version of the CAS antitropedo was implemented on it with some limitations, ensuring a reliable solution to the problem of hitting the torpedo only from the board of a submarine.

The development of microelectronics allowed as early as the beginning of the 1990's. raise the question of the possibility of effective use of anti-torpedoes and for the anti-torpedo protection of surface ships. Later it was implemented to the package-NK complex (export version of Package-E).

Despite the difficult for Russia 1990-s, the potential of the SNNP "Region", under the leadership of General Director Shakhidzhanov ES, was not only preserved but significantly developed. The world's first actual targeting of mock-ups of anti-torpedoes to high-speed torpedo targets were made at the Feodosiya Navy range in 1998 year. It should be noted that these tests were carried out in extremely difficult hydrological conditions for the operation of CLS counter-torpedoes. And nevertheless, the tests were successfully carried out with the provision of guidance to the torpedoes with high accuracy, which ensured the “destruction of the hull” of the attacking torpedo under the TTZ.

The package-NK complex has a modular design and a large modernization potential. It is not the first year that ships with this unique weapon system have been part of the Russian Navy.

It is interesting to compare the effectiveness of the package-NK complex with similar products (complexes) from other countries. Development of active PTZ complexes with anti-torpedoes in the west was carried out in Germany - Sispider, USA - Tripwire, Italy and France - MU90HK.

The most successful were the development of the US Navy, which ended in June 2014 with an impressive demonstration of the real solution of the PTZ task of the newest aircraft carrier George Bush from torpedoes of the Mc48 type.

Despite the fact that the real full tactical-technical characteristics of the TripWire anti-torpedo were not disclosed by the US Navy, it should be assumed that the high-speed and range of the anti-torpedo was achieved. The assumption is based on the fact that this counter-torpedo applied a unique and extremely complex power plant on lithium fluoride with a closed-cycle turbine.

However, the main criterion for evaluating the effectiveness of the PTZ active complex is not the “table indicators” of products, but the reliability of solving the PTZ problem (destruction of the attacking torpedo). With all its excellent performance in speed, range and compactness, the Tripwire carries a very small warhead, and the layout chosen by the developers significantly limits the maneuverability of the torpedo.

Here it is necessary to emphasize once again, not only that from the very beginning of the domestic development of the customer’s anti-torpedo, the question of ensuring a very high probability of attacking torpedo attacks was firmly raised, but also that all the developer’s efforts (“Region”) were aimed at this, and eventually these requirements were met.

The high complexity of solving the problem itself was most clearly manifested during the development of the active complex PTZ Sispider (Germany), when the developer was already at the final stage of development, during testing in real conditions and according to real goals (torpedoes), he had to make very significant changes in the design of both the complex and the counter-torpedo itself (including those that obviously limited efficiency from the originally planned level):

• the refusal of a “rocket type” launcher in favor of “firing at the side” from an inclined pneumatic launcher significantly limited the effective range (Def) of torpedo attacks;

• a small (insufficient) mass of warheads forced developers to go for a unique solution for Western products - the use of a detonating rocket engine (a similar solution was previously used at the Russian “Igla” SAM).

However, according to the information available in the media, the German developers did not manage to complete the development of the “Sispayder” and bring the reliability of the solution of the PTZ problem to an acceptable level.

The statements of the Evrotorp consortium about the solution of the active PTZ problem by the MU90HK counter-torpedo at the moment seem to be more advertising, since there is no objective information about the actual testing. However, it should be noted that the weight and dimensions parameters and table TTX MU90HK are close to the MTT product of the “Package-NK” complex, and with the corresponding modifications, the MU90HK anti-torpedo can gain its high anti-torpedo potential.

The development of active anti-torpedo protection in JSC "GNPP" Region "continues, including along the path of creating small-sized products (ensuring their high efficiency) and a number of other areas.

Thus, today the anti-torpedoes of the “Package-NK” complex have the highest, in comparison with world analogues, anti-torpedo potential, ensuring reliable defeat of the attacking torpedoes.

MAIN TACTICAL AND TECHNICAL CHARACTERISTICS OF PTZ PACKET-NK
Anti-torpedo AT is designed to destroy torpedoes attacking the ship when the Package-NK complex is operating in the anti-torpedo protection mode
Caliber
324 mm
Length
3108 mm
Weight
not more than 400 kg
Explosive mass in TE
80 kg
Travel speed
to 25 m / s
Stroke range
up to 1400 m
Homing system
acoustic, active-passive
CLO range
up to 400 m
Attack torpedo destruction area
from 100 to 800 m
Terms of combat use: