22 May 2016
298
On the May holidays, I decided to cultivate and visit the Yeltsin Center (aka Yeltsin Museum) to learn more about the heroic biography of the first president of the new Russia, freed from the bloody yoke of the Communists. Before visiting the museum from Boris Nikolaevich's glorious past, I remembered only a promise to lie down on rails, a wet wheel of an airplane, orchestra conducting and a fall from a bridge. But, as it turned out, Yeltsin also accomplished many good deeds, to remind which they built this museum for a modest seven billion oil pipes. 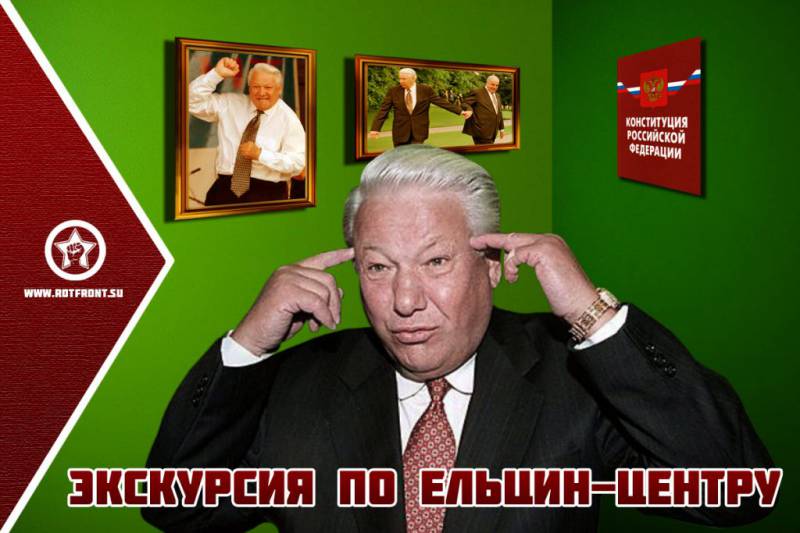 No matter what they say, the building is beautiful center. Together with the contents of two billion just pull. Everything around is clean, the fountains are different, the public walks relatively intelligent. In front of the building stands a monument to Boris Nikolayevich. Before that, evil tongues have said that the monument is made in the form of a bottle of vodka, plugged with a tennis racket, but this is not so. The first president of free Russia is immured into a stele and, leaning on something invisible, squinting, looks down at the expensive, you understand, Russians.

Inside the museum, the decor is very decent, there is a buffet and a restaurant with a good choice of liquor (prices are, however, atrocious), it smells nice everywhere, like in Turkish hotels. A lot of well-polite guards, reliably protecting the museum from various misfortunes. Prices for a visit to the museum are affordable: two hundred rubles per adult, if without privileges and titles. Instead of paying big money for the theater, a poor Russian can easily get his share of the culture in a museum. The smiling girl selling tickets tried to convince me to attend a modern art exhibition at the same center, but I honestly didn’t be sorry if I decided that culture would be enough for me without blue pigs with five legs.

Near the entrance hangs a large stand with the names of organizations and the names of people who have helped in the creation of the museum. It is nice to see how ardent patriots harmoniously coexist with terry liberals in the list. Perhaps this is the very unity of the entire Russian people, about which they have been talking so much lately. However, some patriots at the sight of the booth, seeing the name of the main fighter against the oligarchs among those he fights against, are embarrassed and begin to babble something about a particularly tricky multipurpose. I suddenly wondered at the stand how Soviet citizens would react if Comrade Stalin had built the Museum of Trotsky in Kirovograd to fight the Trotskyites.

In the dressing room you can see the gifts that Boris Nikolayevich presented to him in different years of his reign. From gifts I remember the magnificent two-handed sword - the dream of the Tolkienist. Undoubtedly cold weapon handed over to the first president for felling the communist hydra. Also struck by the presidential service armored car ZIL, who faithfully served the father of Russian democracy before the transfer to the products of the German automotive industry. The first president received many gifts from his comrades-in-arms, of which for some reason I remembered only Burbulis before visiting the museum.

Passing through the framework of metal detectors, we find ourselves in the museum itself. To warm up, visitors are invited to watch the short film “Russia in Search of Freedom”. To be honest, the film is not very: it is clearly designed for young people with clip thinking - the tedious meltiness of 3D characters, the rapid change of personnel and other "our response to Hollywood." And the graphics are not so hot, the introductory video of the game “Civilization” is more impressive. From the film you can find out in what a difficult way Russia from the beginning of time went to freedom, which came only in 90. Naturally, it was especially difficult with freedom in Soviet times. The filmmakers were modest and estimated the number of those killed by the Bolsheviks at only twenty million. For the sake of objectivity, it should be noted that the film was positive about the DniproHPP and the Great Patriotic War, but with the proviso that the whole of the great Soviet was “in spite of” and “with great sacrifices”. Here, the liberal filmmakers sang in unison with the patriots, who claim that all the gains of socialism were made by the mysterious "simple peasant" who was hampered by the Communists, constantly chewing on their party rations and occasionally postrelyavshie unfortunate peasant in the head.

Next, the visitor will have to go through a narrow corridor, filled with pre-Yeltsin-era expositions, broken down by main periods: coup d'état of a drunken sailor, red terror, NKVD torture chambers, Khrushchev's corn - everything is as usual. On the stands, posters of the Soviet era are competently interspersed with photographs of hungry children, innocently arrested and other horrors of the Soviet era. In short, nothing new. In each section dedicated to a specific period, a screen hangs showing frames of films and speeches of statesmen. Films are shown different, sometimes not from that era. For example, in the section of bloody Stalinism I managed to notice footage from the perestroika rendition film “Peers of Valtasar”. The screens were a bit annoying: the sound from different sources interfered, and it all looked like a Soviet cartoon about Niechochuha, which simultaneously showed several cartoons.

Slightly stupefying the nightmares of the Soviet era, the visitor climbs to the second floor, where he will have to familiarize himself with the “Seven days that have changed Russia.” In contrast to the days of the Lord’s creation, the seven Yeltsin’s days are not consecutive: coup, “filling counters”, adopting a constitution, overcoming default ... If I were the museum’s manager, I would add up to twelve to the number of Yeltsin’s feats: compare God’s love to God , but with Hercules completely. Such exploits as the First Chechen, the storming of the White House, slept through Ireland, the attempt to kill the KGB officers with the help of an electronic heart-stopper, dancing with the singer Osin, the tracks again ...

We must pay tribute to the creators of the museum, from seven days they sucked everything possible. Talk about all the exposure for a long time, I will describe only the most vivid. Day three, for example, is dedicated to saving the country from starvation. In one room is a typical Soviet-era store, existing in an alternative liberal reality: of the goods there are only three-liter birch sap and a pyramid of cans of seaweed, just in case glued to the counter. A nice young couple got acquainted with the exposition with me. The girl was surprised by the abnormality of the Soviet people, who, sitting on such a tough cabbage-birch diet, were able to defeat the fascists and something else to build there. And the young man was intently trying to pick off one of the cans to find out whether the bloody Bolsheviks indicated composition and calorie content in the products. But in another room for the contrast was shown the abundance, which came as a result of the reforms. Products for unknown reasons did not show (except for spirit "Royal" and vodka "Absolute"), but on the stand put a huge amount of the then household appliances and clothing, among which I touched and longing for the past youth saw the Turkish sweater "Boss".

One of the "days" was devoted to the scandalous election campaign "God forbid". The creators of the museum remembered it with a light touch of playfulness, slightly embarrassed, like some famous writer, recalling that in his childhood he had broken a grandmother's vase. They say, oh, how young we were, we didn’t really know how to organize pre-election PR, well, never mind, for the good of all! But October 1993 is shown somehow vaguely. In one of the rooms, police shields were piled in a pile (which is why many visitors decided that they did not manage to equip the hall), while in the other, bypassing various unpleasant moments, the creators immediately went on to the newly-made constitution, the articles from which various Russian stars read frighteningly movies and pop.

And, finally, the apotheosis of the whole exhibition is a hall of freedom, which in Russia did not smell like Yeltsin. The Bolsheviks, of course, also talked about freedom, but it was the wrong freedom. Not far away Communists believed that a person is free if he is provided with work, where he cannot be “optimized” or appropriated profit, free education in any quantity and other totalitarian dirty tricks. But those who were especially hard-nosed could not understand what Boris Nikolayevich brought them such freedom, if during his time people began to barricade the dwellings with iron doors and grilles, it was impossible to get to the institutions without a passport, the police acquired rubber oak, at the entrance to the airport they were shamed in prison, parents accompany children to school until they come of age. This is the hall of freedom that is precisely designed to dispel all doubts.

Freedoms, which the designers of the hall counted exactly five, are pillars with screens, on which various figures constantly talk about the freedom under which the screen hangs. Mr. Yeltsin brought the enslaved Russian freedoms the following freedoms: entrepreneurship (essential for the majority of the population), movement (not very relevant after the recent Turkish-Egyptian scandals), meetings and associations (about which they try not to mention after the events at the Swamp), thoughts and words ( about which bashfully they have been silent for ten years now; they don’t, in principle, prohibit thinking, but only infrequently and silently) and conscience (played with communist tyrants). The bewilderment caused a small number of freedoms guaranteed by the constitution: either the listed freedoms are the most important, or the hall is too small, or just not enough money for the rest.

Before going out, every visitor can democratically sit down on a bench next to the full-size bronze Yeltsin to mentally share with him the pain and think together about the fate of free Russia. I sat down, leaning on the warm side of the father of Russian democracy. And quite unexpectedly I dreamed that I would do on the site of the management of the museum, in order to get out some more money from the state budget. You can, for example, make live installations depicting simple men chained in communist shackles. Visitors would walk, and their fellow citizens, worn out by totalitarianism, would cling to their legs. And from time to time the first president would rush through the halls, breaking the chains and giving dear Russians freedom and democracy. Wow, isn't it? In total, it will take a couple of billions, a mere penny for our oil budget!

Suddenly, it seemed to me that Bronze Boris Nikolayevich read my thoughts, smiled patronizingly, and he was breathed by the wind of change with a light aroma of fresh fume.

Ctrl Enter
Noticed oshЫbku Highlight text and press. Ctrl + Enter
We are
About Stalin and KhrushchevWhat you didn't want to know about England
Military Reviewin Yandex News
Military Reviewin Google News
298 comments
Information
Dear reader, to leave comments on the publication, you must sign in.