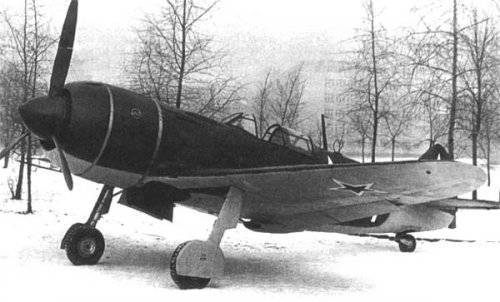 The La-7 fighter was developed at the S. A. Lavochkin Design Bureau in the 1943 year. It is a further development of the fighter La-5FN. Since it was not possible to install a more powerful engine, it was only possible to improve flight performance by improving aerodynamics and reducing weight. Together with TsAGI specialists, a set of measures to improve aerodynamics was carried out: the airframe and the rotor-engine group were sealed, the landing gear niches were completely closed, the oil radiator was moved under the fuselage, the wing's shape was improved, the engine hood was modified. Lend-lease deliveries and the organization of aluminum production in the depths of the USSR allowed it to be more widely used in aircraft construction. The mere replacement of wooden wing spars for duralumin with steel shelves allowed to save 100 kg (drawings of metal spars were developed in summer 1943 of the year at plant No.381 under the direction of PDGrushin). In January, the 1944 of the year at the plant No. 21 produced the aircraft La 5 Reference Standard 1944. February 2 test pilot GM Shiyanov first raised him to the sky. Two weeks later, 16 February, the plane was transferred to state tests. After testing, the aircraft was launched into a series in May 1944, under the designation La 7. By November, he completely ousted on the conveyor belt La-5FN. 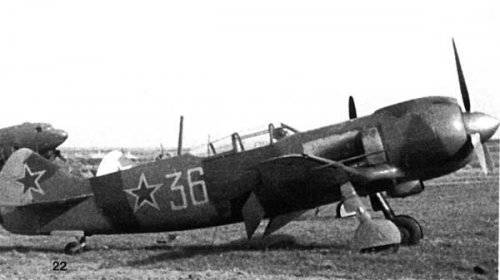 La-7 is built on the aerodynamic configuration of the cantilever low plane. Fuselage-type semi-monocoque. The wing is equipped with automatic slats. Three-support chassis with retractable tail wheel. The power plant consisted of a piston star-shaped air-cooled engine ASH-82FN with a three-blade propeller of variable pitch VISH-105В. Armament consisted of 2 synchronous guns ShVAK or SP-20. Part of the aircraft production plant number 381 3 equipped with guns UB-20.

There were the following modifications:

La-7 aircraft is considered one of the best fighters of the Second World War. He was an aces plane. Not without reason, Guards regiments were equipped with them first of all (176 Gviap received them first). La-7 could fight on equal terms with Me-109 and FW-190. He excelled Me-109G in horizontal and vertical maneuvers. Up to a height of 3500 m, and FW-190 - in the whole range of heights. "Focke-Wulf" had the advantage only in the speed of a dive, which the Germans used to carry their legs in time. It was on La-7 that the war of the three times Hero of the Soviet Union I.N. Kozhedub ended the war. Now this aircraft (airborne No.27) is exported to the Air Force Museum in Monino.

Production of the La-7 continued until the 1945 year. A total of three plants (№21 in Gorky, №99 in Ulan-Ude and №381 in Nizhny Tagil) produced 5905 aircraft. From 15 September to 15 October 1944, the first 30 serial aircraft passed military trials in the 65 guiap. In 47, air battles over the territory of Lithuania were shot down by 55 of enemy aircraft with the loss of their 4 (all due to engine failures). Later, La-7 was used in ever-increasing quantities on all fronts until the end of the war. Dismissed in 1947 year. In addition to the Red Army, the La 7 aircraft were in service with the Czechoslovak air force (up to the 1950 year).