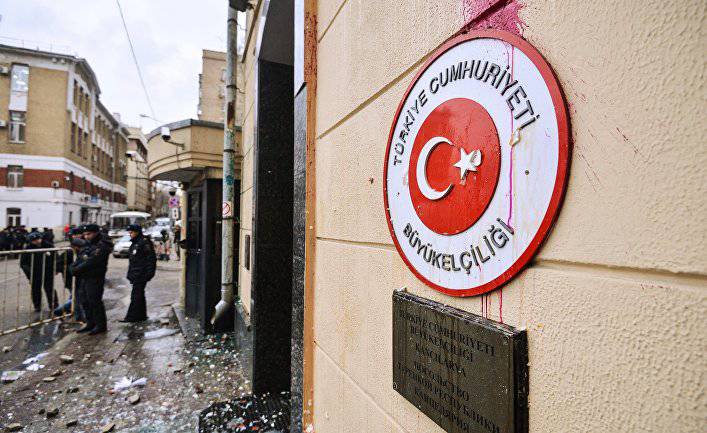 The destruction of a Cobra-type helicopter belonging to the Turkish Armed Forces in the Cukurdj (Hakkari) 13 region in May with an allegedly portable missile launched by the Kurdistan Workers' Party (PKK) raised two frightening issues on the agenda.

First, how many such missiles — potentially capable of significantly influencing the course of hostilities — are at the disposal of the PKK?
And second: how did the missiles of this type fall into the hands of the PKK?
The main concern underlying the second question, which may have many answers, is that the PKK could receive this missile (or many missiles of this type) from Russia.

In his speech on December 3, Russian leader Vladimir Putin, who for the first time made it clear that Russia, whose plane was shot down by Turkey on November 12, said: “Turkey cannot get away with tomatoes alone (banning the import of tomatoes),” - thus making you think that political and even military steps may follow trade sanctions.

The next day, December 4, a soldier standing on the deck of a Russian warship passing through the Bosphorus, during the entire transition, held a ground-to-air man-portable air defense system (MANPADS) on the shoulder with a fire.
Now it is said that the rocket that hit the helicopter in the area of ​​Cukurje and led to the death of two pilots "may be identical to the rocket on that ship."

In the issue of the weekly Russian newspaper “Arguments of the Week” from 19 in May, journalist Jaroslav Vyatkin enthusiastically wrote:

“On May 13 in Hakkari, the injection of“ Needles ”finished off“ Cobra ”. The Turks at first denied this, but when the Kurds published the video, everything became clear. Russian-made Igla MANPADS shot down an American-made Cobra helicopter. Moreover, this video of Kurdish militants accompanied “Polyushko-field” in Russian (the world-famous song about the Soviet army - Kh.A.). What was missing was Putin’s phrase “Turks will not get off with tomatoes”. The Kurds, albeit from their own interests, openly declared that they had avenged our pilots. A day later, they announced the destruction of a larger helicopter. But there is no video, and the Turks, of course, deny this fact. ”

I watched many versions of this video on various Turkish and Russian sites, but I did not hear Polyushko Polye. (The author may be confusing with another similar earlier video.) Be that as it may, it’s not the credibility of the words of a journalist who extracts a hint of tomatoes from the video with a belligerent and nationalist tone, but the likelihood that the Russian Igla can actually be in the hands of the PKK.
Exalted bill for the destruction of the Russian aircraft

I do not want to drown in military details and drown readers in them. In my opinion, the main problem is as follows.
As I put it in the title of my first article on the crisis, written on the evening of November 24, Ankara made the most serious mistake in foreign policy, shooting down a Russian plane.
Over the past almost six months since then, she has not made any significant effort to correct this situation.
Moreover, sometimes she just added fuel to the fire.

The influence of Turkey in Syria and in the whole in the Middle East has extremely decreased. From the fear of Russia, the aircraft of the Turkish Armed Forces do not even come close to the border with Syria.
The balance that has been able to use at one level or another for decades in foreign policy has been lost. The Turkish leadership, which used military force against Russia, which until recently was considered practically a strategic partner, found a way out to find refuge in the arms of the United States and NATO.

The national economy suffered billions of dollars in damage. A number of sectors, primarily tourism, received a very heavy blow. You can still bring a losing balance for a very long time.
In order not to delay this process, I will ask the question differently: is there at least one plus for Turkey from the destruction of the Russian plane? So far, the Turkish authorities have not been able to answer this question. And hardly ever will.

The Russian leadership, which 24 November demonstrated an extremely harsh and emotional reaction, sacrificed a significant part of its relations with Turkey in order to "stand against Erdogan." From trade and economic areas to education, culture and interpersonal relations.
The Kremlin hoped that as a result of all these sanctions, Erdogan would be able to kneel. That did not happen. In the meantime, Russia, which has driven itself into the dead end of this tough policy, has become incapable of other maneuvers for six months.

Is there really no other point of view in Russia about Turkey? Of course have. In the end, there are those who insist on the need for flexible steps that will make Ankara, if not friendly, as before, then at least neutral capital for Moscow, and in the future will provide opportunities for stopping possible “ignition points” (in the economic sphere, energy cooperation for the long term, from the perspective of Russian companies in Turkey, finally, in regions such as Tatarstan, the Caucasus, Central Asia and the Middle East). But fearing the wrath of Putin, they do not speak out loud about it.

From time to time, some signals from Turkey come from representatives of the Russian leadership, such as “Turkey is not our enemy”, “the crisis in relations with Turkey is temporary”, “relations can be revised, but Ankara should take the first step”.
Then they see that the opposite side is not taking any steps that go beyond the framework of the unexpected optimism of Foreign Minister авavuşoğlu, who constantly says: “Look, relations with Russia are gradually getting better.” And again they are accepted for their former tough position.

“We are waiting for three steps from Ankara:

1. Apologies for the destruction of the aircraft.

3. Punishment of the guilty. "

Ankara has repeatedly found its cramped position, the source of which is the error associated with the destruction of the Russian aircraft. Ankara said not only "we are upset," but also "if we knew that this was a Russian plane, we would not have shot it down." But under the influence of political and psychological factors, she never brought an apology. The time that has passed since 24 in November has shown that apologies in the form Putin is waiting for them have gradually become impossible.
But not so long ago an event occurred that agitated Moscow because it was connected with its demand to “punish the guilty”. Alparslan елиelik (Alparslan Çelik), who claimed responsibility for the murder of the pilot Oleg Peshkov, who had been ejected from the downed plane, was arrested.
But then Celik was released. Perhaps Ankara did not attach much importance to this arrest. Or maybe Ankara held Celik for several weeks as a trump card to give a definite signal to Russia, but, not meeting the reaction expected from Moscow (?), She did not consider it necessary to continue this tactic. As a result, a very strange situation arises.
Russia is the largest country in the world, a nuclear power, a member of the UN Security Council, one of the main elements of all regional equations in which there is Turkey ...
If the crisis is prolonged, it can put Turkey in a difficult position from many more points of view.

Of course, Moscow also suffers from the escalation of the crisis with Ankara. But the losses of Ankara will be greater. The past six months have clearly shown this. In this case, it is imperative that you take steps to settle the relationship. But such steps are not taken. Moreover, such a topic does not seem to be on the agenda of Turkey. Some irresponsible politicians take provocative positions. Thus, a deputy of the Justice and Development Party (AKP) named Shamil Tayar (Şamil Tayyar) wrote on his Twitter page after the basketball game Fenerbahce vs. CSKA:

"I want to shoot down another Russian plane."

This phrase, crying out from the point of view of its low level and frivolity, unfortunately got into hundreds of pages of Russian newspapers. Attention to it remains until now.
How do you explain the fact that there are “such politicians” in Turkey? That they do not have any political, moral concerns? The fact that they are devoted only to one person, only they are considered with him and only they are afraid of him?
Or the fact that not a single statement followed from the high-ranking leaders and leaders of the AKP that would put everything in its place?

Is the new prime minister a chance?

We all know about President Erdogan’s arbitrary measure of “expelling Davutoglu” and “putting Yıldırım in his place” (Binali Yıldırım, Minister of Transport, Shipping and Communications of Turkey, who was nominated by the AKP for the post of Prime Minister Turkey - approx. Lane.).
No one expects this to open the door for any major changes in Turkey’s domestic and foreign policy.
We know that if one day a new prime minister makes a statement like “we intend to correct past mistakes”, it will mean not so much sincerity as maneuvers carried out on the installation of Erdogan.
At the same time, the change of the Prime Minister and the government in any country is an important event, no matter what.
It is given importance throughout the world.
Of course, today there are no signals to the fact that Turkey will abandon its abundant tragic mistakes of Syrian politics. But in this matter one can come to a more rational and logical line and take steps to try to prevent events that threaten not only Turkey, but also the AKP authorities.

Perhaps the new prime minister will take certain measures to eliminate the crisis in relations with Russia. Even if these are not the excuses that Moscow is waiting for, the new prime minister may take some easing initiatives.
He may try to show that the line of the former prime minister, who said: "I personally ordered the destruction of the aircraft," in the past.
He may report that Turkey is in favor of creating a mixed commission to punish those responsible.
Moreover, he can initiate a desire to sit back at the negotiating table on the Turkish Stream project, making a statement that the Kremlin has been waiting for with a fading hope for a long time.
I seem to feel how many readers who read these lines frown on their faces and believe that I am in the clouds.
You are right, of course, all this is extremely low probabilities, and Russia will not be convinced.
No, not convincing, but ...
Sometimes, if in politics and diplomacy all the ways are closed, even gestures, the sincerity of which can be argued, can have at least a small return.

Ctrl Enter
Noticed oshЫbku Highlight text and press. Ctrl + Enter
We are
Turkey against the Kurds. Is there a new phase of conflict ahead?Situational analysis of the death of the MH17 flight (Malaysian Boeing 777), made on the basis of engineering analysis from 15.08.2014
Military Reviewin Yandex News
Military Reviewin Google News
70 comments
Information
Dear reader, to leave comments on the publication, you must sign in.