23 May 2016
10
The United States continues to upgrade communications and naval command and control systems. To date, the NIFC-CA system has been created and put into operation, with the help of which the principle of unified air defense is implemented fleet. In the foreseeable future, the operation of a similar system designed to protect against enemy surface ships and coastal targets will begin. Work in this direction was announced a few days ago.


During the recent Sea-Air-Space 2016 exhibition, the US Navy Rear Admiral Michael Darra, who heads the unmanned and percussion systems department, spoke about current plans for the development of fleet support forces. The goal of the new project, called All Domain Offensive Surface Warfare Capability, is the creation of an information network connecting the various fleet forces and allowing them to exchange information necessary to carry out attacks.

The ADOSWC system will have to combine many different elements, from satellite intelligence to submarines. Detection systems for spacecraft, reconnaissance aircraft, surface ships and submarines will be required to monitor various water areas and search for potential targets for a strike. At the same time, all participants of the new network will exchange information about the current situation in the so-called. tactical cloud. Due to this, all participants in the system will be able to timely receive information about certain objects and threats, and will be able to respond to them correctly. 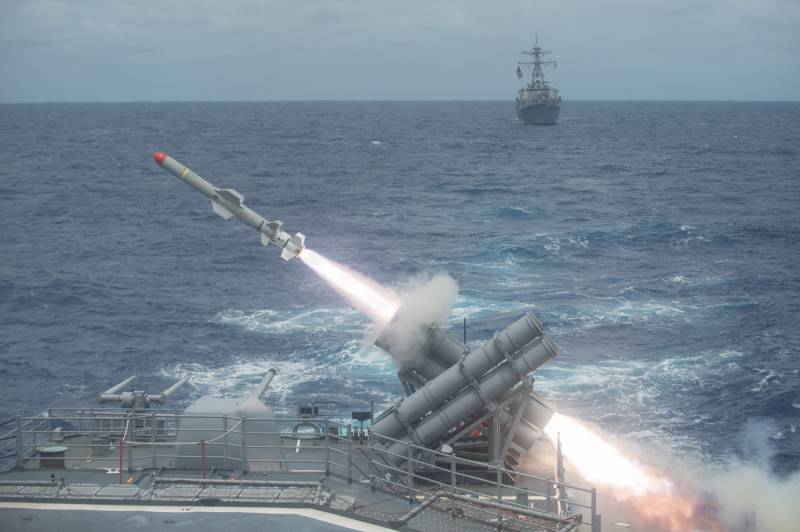 The main principle of the proposed system concerns a new data processing method. All information about the situation in different areas, obtained from various means of detection, is proposed to be placed in the "cloud", to which all members of the network will have access. Thus, any ship, submarine or aircraft with access to the "cloud" will be able to immediately receive all the available information on the detected target. The information collected by joint efforts should be used by various consumers for solving various tasks in different areas.

The main advantages of a promising information network such as the All Domain Offensive Surface Warfare Capability over existing communication and control systems will be the expansion of the controlled area and reduced response time to threats. According to Rear Admiral M. Darr, together all detection systems will be able to "see" further and find targets faster. As a result, the size of the zones safe for the enemy, not controlled by the Navy intelligence systems or inaccessible for a quick strike, will be drastically reduced.

The ability to quickly obtain all the data about the target, its location and other parameters is expected to increase the effectiveness of the existing weapons. With the help of a quick transfer of target designation to one or another attack means, from aircraft to cruise missiles, it will be possible to increase the size of controlled areas. In the current situation, such opportunities are unavailable, because the situation does not always allow to strike in an optimal way due to the impossibility of quickly transmitting data about the target to the most suitable strike complex.

New information network ADOSCW ​​is currently being developed by specialists of the Department of unmanned percussion systems of the US Navy and the organization Integrated Warfare Systems. The project is also supervised by the Office of Naval Operations. As follows from recent statements, the project of a promising communication and management system has already advanced quite far. Separate facilities of the new complex will be deployed at the end of this year. Some systems have already passed the necessary tests and are ready for use by the fleet.

New development of American experts is of great interest, and may also be cause for concern. The introduction of the complex All Domain Offensive Surface Warfare Capability can significantly reduce the response time of the United States Navy to various surface threats, as well as expand their strike potential through the use of percussion systems that are optimal from the point of view of the current tactical situation.

It should be recalled that at present, systems for combating enemy surface ships or destroying coastal targets operate according to the Kill chain (“Killing Chain”) concept. Such a scheme involves the sequential transmission of information from a reconnaissance vehicle (for example, a long-range radar survey aircraft) to a command post, and then to a ship of a particular class or a submarine. Only after this, target designation arrives at the control panel of the strike missile system or deck aviationwho have to attack the target.

This scheme is used for a long time and has proven itself. Nevertheless, it has some drawbacks, the main of which is the relatively long time of transferring data about the detected object from the reconnaissance system to the strike complex. In the case of surface targets, this can lead to significant time delays. As a result, by the time the aircraft or anti-ship missiles reach the intended area, the target may change its location. In this case, constant monitoring of the target is required, with updating of target designation (besides, complicated by the duration of data transmission), or an independent search for a target with a strike aircraft.

With the constant development of ships, submarines, aircraft, weapons and electronic systems, the Kill chain concept ceases to meet current requirements. To ensure timely response to emerging threats, the naval forces need to work on the Kill web system (the “Killing Network”). Such a concept implies the preservation of relatively short “chains” intended for solving some specialized tasks. At the same time, the separate “chains”, united in a common network, are not intended to carry out the entire transfer of data from reconnaissance to shock systems.

Within the framework of the "Killing Network", a large number of separate Kill chains for different purposes should interact. In such a case, faster data transfer to consumers with corresponding consequences for performing shock operations can be provided. For example, it will be possible to find targets using DRLO aircraft and transfer information about them as quickly as possible to the nearest ships with strike weapons. Also, for example, submarines will be able to carry out target designation for aircraft with anti-ship missiles. The advantages of such a system are obvious, but its creation may be associated with some technical and technological difficulties.

Recent reports of representatives of the US Navy testify to some success achieved in the framework of the project All Domain Offensive Surface Warfare Capability. By now, as follows from the available information, the general features of the information network architecture have been defined and the requirements for its individual elements have been formed. In addition, the development of various elements of the new complex is being completed or is being completed. The first elements of ADOSWC are planned to be deployed on ships and submarines of the US Navy at the end of this year.

The new information network ADOSWC is designed to detect, track and attack various types of surface and coastal targets. Its deployment will allow the US Navy to increase the strike potential with respect to enemy ships and coastal targets. In combination with the already existing unified air defense system, the new complex is expected to positively affect the general capabilities of the US Navy.