23 May 2016
12
At the end of last week, another HeliRussia-2016 helicopter exhibition was held in Moscow. For the ninth time, domestic and foreign companies had the opportunity to show their new developments, as well as get acquainted with other people's achievements. Also, potential customers were able to find out the current trends in the development of helicopters, as well as select suppliers of the required machines. Specialists and amateurs of technology were able to get acquainted with the latest helicopter from 19 to 21 in May.


The exhibition HeliRussia has already become one of the main domestic platforms for the demonstration of new developments in the field of helicopter construction. This year 219 organizations from Russia took part in the exhibition, including almost fifty representatives of 16 from foreign countries. Some of the exhibitors showed their designs on their own stands in the form of advertising materials and layouts, and some enterprises presented finished equipment of various classes. Visitors to the exhibition had the opportunity to see new developments both in the pavilion and on the static parking lot. 16 machines of different types of domestic and foreign production are presented on the open area.

The program of the last exhibition HeliRussia-2016 was attended by a large number of different events. During the three days of the salon, several conferences, meetings, presentations and demonstration events took place. For example, a number of organizations, primarily those involved in the development of unmanned vehicles, conducted several flight demonstrations of such systems. In particular, there were races and battles of unmanned aerial vehicles. 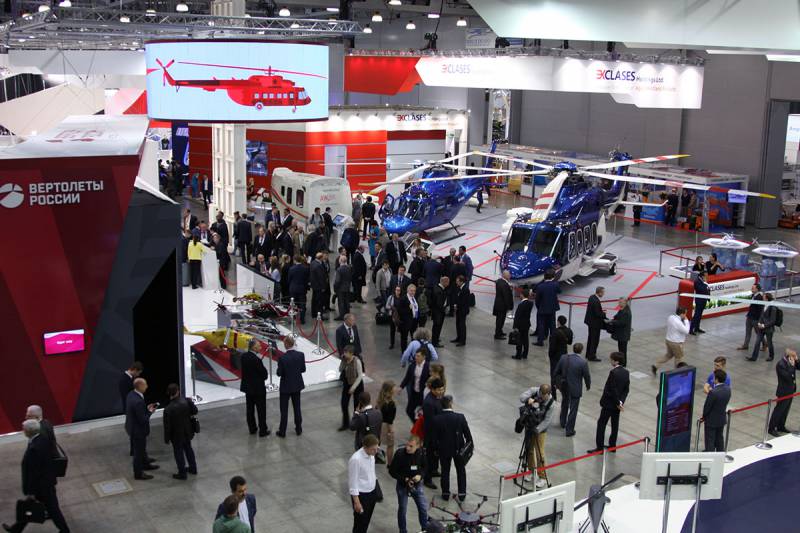 Recognized leaders of the domestic helicopter industry this time did without loud premieres, but showed a number of interesting machines with great prospects. For example, the Moscow Helicopter Plant. M.L. Mile showed the second flight of the multipurpose helicopter Mi-38. This machine has already received sufficient fame, and in addition, is already preparing for mass production. Last year, it was reported that the Kazan Helicopter Plant began assembling the units of the first production Mi-38. Also at the end of last year, this helicopter received a certificate that opened the way for its operation.

In the context of the further development of domestic helicopters, the equipment represented by the Kronstadt group is of great interest. At the stand of this organization, the complex of the onboard equipment KBO-62, designed for the Ka-62 multi-purpose helicopter, was shown. Complex KBO-62 is built on the basis of modern components and has a number of basic functions that provide piloting the helicopter in different conditions. In addition, the principle of the so-called. glass cabin, to a certain extent simplifies the work of the crew. It should be noted that the KBO-62 helicopter complex for the Ka-62 helicopter is similar to the IKBO-38 system developed for the Mi-38, but has a number of differences associated with smaller machine sizes and other requirements for control systems.

The leading European manufacturer of helicopter equipment Airbus Helicopters showed its new developments in the form of mock-ups. First of all, the foreign organization intended once again to demonstrate to potential customers the H135 helicopter, intended for sanitary aviation. This machine is capable of transporting two doctors and one bedridden patient. Also on board there is a set of medical equipment to assist. In February 2016, a contract was signed for the licensed production of such helicopters in Yekaterinburg. Another novelty from Airbus Helicopters is the H160 multipurpose helicopter. The machine, the model of which was shown in Moscow, is designed to perform various transport tasks.

The exhibitors also presented a number of new technologies that will be used in the further development of helicopter technology. By introducing new ideas and solutions, it is planned to improve the characteristics of new equipment of various classes and types.

Central Institute of Aviation Motors P.I. Baranova (CIAM) showed a number of samples manufactured using new technologies. Thus, the use of parts made of composite materials in the construction of turboshaft engines is being tested. The use of composites makes it possible to achieve a reduction in the mass of the structure by 30-60%. Also, the development of new technologies necessary for the creation of aircraft piston engines. At present, CIAM specialists are paying special attention to new piston engines and small-sized gas turbine power plants for civilian use. Such developments should improve the competitiveness of the domestic aircraft industry.

“Helicopters of Russia” and the holding “Teplodinamika” intend to test a new fuel system next year, which will be able to reduce potential risks in an accident. Currently, the development of new units for the Ka-226T helicopter is underway, and next year the system will be installed on the carrier and will conduct flight tests. Due to the use of new materials and technologies, it is planned to eliminate damage to fuel tanks and fuel spraying under mechanical stress. This will reduce the likelihood of fuel spills and fire in the event of an emergency landing or fall of the machine. The first to receive a new system Ka-226T, in the future, similar units can be created for other types of helicopter technology.

The development of the domestic helicopter industry, demonstrated by the exhibition HeliRussia-2016, allows you to continue operating the existing technology, as well as develop new models. For obvious reasons, the main purpose of the exhibition is to promote developments in the domestic Russian market. According to reports, 2015 helicopters of various types were registered in 2605 in Russia, which was more on 129 machines than in 2014. Statistics for the current year has not yet been summarized, but opinions are already being expressed about a possible reduction in the growth rates.

Nevertheless, the Russian industry continues to develop helicopter technology and offers it for order. Foreign companies also want to get new contracts, and therefore take part in exhibitions HeliRussia. The results of the promotional activities of helicopter-building companies and the success of their participation in the completed exhibition will be known in the near future. If one or another of the submitted samples interested potential buyers, then very soon negotiations on the terms of the new contracts should begin.

Ctrl Enter
Noticed oshЫbku Highlight text and press. Ctrl + Enter
We are
The action “Military service under the contract is your choice!” In Rostov-on-Don: future contract servicemen, exhibitions and “Russian Knights”According to the results of HeliRussia-2013
Military Reviewin Yandex News
Military Reviewin Google News
12 comments
Information
Dear reader, to leave comments on the publication, you must sign in.