20 May 2016
112
The official representative of the Ministry of Foreign Affairs of the Russian Federation, Maria Zakharova, demands an apology for publishing false information from the Euronews channel. If in the Russian version of the site of the channel, covering the mournful events dedicated to the anniversary of the deportation of the Crimean Tatars, 200 reported thousands of deportees, in the English version it was already about two million.


On this occasion on your page in Facebook Maria Zakharova writes:

We are waiting for an official apology from the TV channel Euronews
I read the site Euronews. The material is about the anniversary of the deportation of the Crimean Tatars and the "festivities" that took place in Kiev on this day.

The Russian version says: “More than 200 thousands of Tatars were deported from Crimea from 18 to 20 in May 1944. Representatives of 20 ethnic groups, including Crimean Tatars, Chechens and Armenians, were subjected to forced relocation on suspicion of collaboration with the Germans.”
And for an English-speaking audience, the story goes like this: "It’s more than two million people,”

And this is not a typo, it is not accidentally attributed an extra zero - two million in the English text written in letters. It also says that in the "occupied Crimea", in particular in Bakhchisarai, commemorative events on the occasion of the anniversary of the deportation are prohibited.

Let's call a spade a spade. This is not double standards in presenting information to different audiences, not engagement. It's a lie.

But that writes "Kremlin propaganda" in the face of RIA News about the actions of the "occupiers": "Mourning events related to the anniversary of the deportation of the Crimean Tatars and other peoples outside the peninsula take place on Wednesday in the Crimea. The main events take place at noon in the Bakhchsarai district near the Lilac station, from which trains were sent in 1944 year with people outside the Crimea. The ceremony is attended by representatives of the government and the parliament of the republic, clergy, Crimeans. "This place should be immortalized so that people can come and remember their relatives at the station from which people Avkali from Crimea ", - said the head of the Republic of Crimea Sergey Aksyonov before the opening ceremony. Aksyonov said that the construction of the memorial, which will take up to three years, has already been allocated land, and its cost is about 14 million rubles. He noted that among the submitted projects highlighted some that have similarities with the memorial complex of the state farm "Red" near Simferopol, which was opened last year.

"This complex, which will be built here, is a good undertaking, it will perpetuate the memory of those tragic days," said the Mufti of Crimea, Emirali Ablayev, during a speech.

The participants of the ceremony examined the projects of the future complex, but in the meantime, a freight car was installed on the rails on the site of the memorial - an analogue of old cars in which the deported people were sent from the Crimea. The car was moved from Dzhankoy, where the staff of the Crimean Railway restored, repaired it and prepared it for installation on the memorial. "

From the "misinformation" RIA Novosti allowed themselves a little - on the site instead of the "72-th anniversary" they wrote "71-i". But in the news feed, the “information machine” was accurate - the 72 anniversary.
The conclusions are yours. Not. After you. 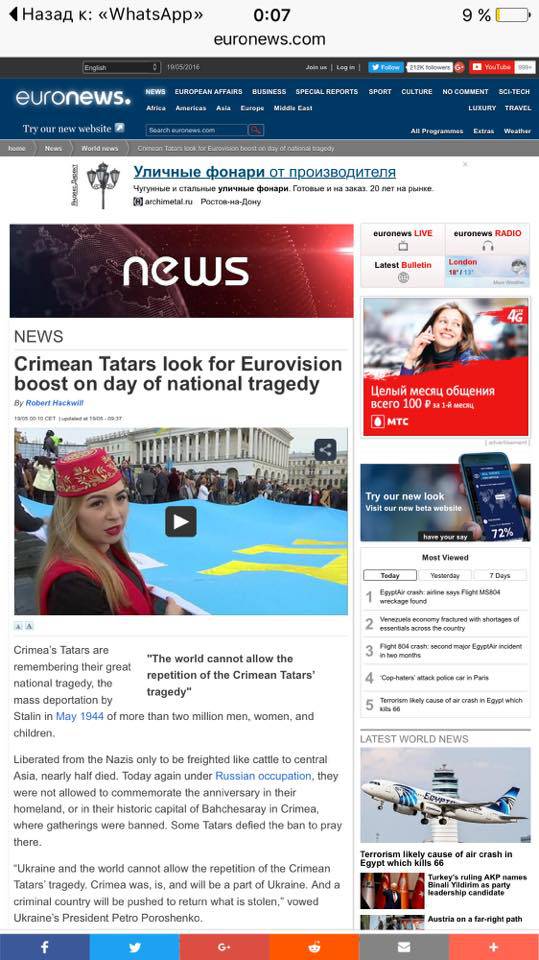 For reference: 18 May in Crimea is celebrated as the Day of Remembrance for the Victims of Deportation. After Crimea reunited with Russia in 2014, the repressed (deported) peoples (Crimean Tatars, etc.) were fully rehabilitated by decision of the federal authorities of the country. While the Crimea was part of Ukraine, the Kiev authorities did not dare to rehabilitate the same Crimean Tatars, and the Western newspapers didn’t pay such attention to this issue as they are today ...

Ctrl Enter
Noticed oshЫbku Highlight text and press. Ctrl + Enter
We are
Kiev revoked the license of the channel Euronews, broadcast in the Ukrainian languageOddities of the work of the program to resettle compatriots in the Russian Federation (journalistic special report)
Military Reviewin Yandex News
Military Reviewin Google News
112 comments
Information
Dear reader, to leave comments on the publication, you must sign in.