Work is not a wolf ... Thousands march of radicals in the center of Kiev

20 May 2016
58
Another action of the radicals was held in the Ukrainian capital. Representatives of the far-right nationalist "regiment" "Azov" took to the streets of Kiev demanding to thwart the forthcoming elections in the Donetsk and Lugansk People's Republics. Informational portal UNIAN reports that the radicals began to set fire to smoke bombs and throw firecrackers from the crowd near the Verkhovna Rada building. 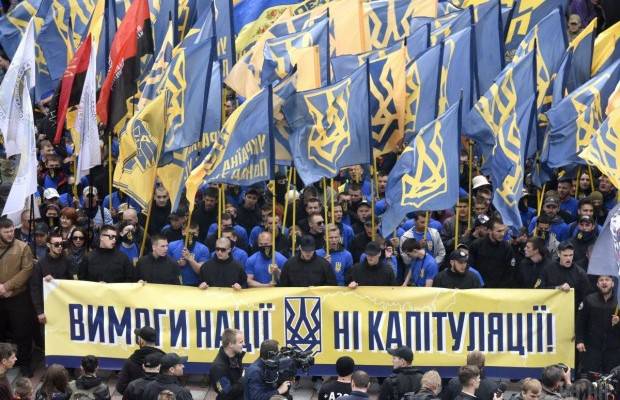 According to the Kiev police, about 4,5 thousands of Azov representatives and those who support this virtually Nazi armed group gathered to the rally in the center of the Ukrainian capital. During the “fire show” of the radicals, at least 2-thousand police officers and military personnel of the National Guard (internal troops) were involved in the protection of law and order.

The march and rally were held under the slogan "The requirement of the nation - no surrender." By capitulation of Ukraine, the radicals consider the possibility of the Donbass to hold local elections, which is spelled out in the Minsk agreements. At the same time, the Ukrainian authorities constantly blow all the clauses of these agreements.

It is noteworthy that the “Azov” campaign takes place on weekdays, during working hours. This suggests that such a concept as “work” by the Ukrainian radicals is ignored, and nothing else but how to burn tires and to baw ridiculous chants, they no longer want and do not know how.