"Hang on, you bastards! Do not outweigh everyone! .." (about Sasha Filippov)

23 May 2016
13
Employees of the Museum of the Battle of Stalingrad told me about the fate of Sasha Filippov, a young defender of Stalingrad. In Volgograd, there is a street bearing the name of the hero. There is a school - it has the number 14.


Talking about Sasha, the guide often called him not by name, but Schoolboy - this was the nickname of a scout.
... The boy was born 26 on June 1925, in a large family - parents raised six children, Sasha - the youngest. Mom, Evdokia Afanasevna, was engaged in housekeeping and raising children. His father, Alexander Timofeevich, worked at the post office, but he was a good carpenter, was a good turner, sewed excellent shoes and taught Sasha this business. The boy did not know that in the future this business would be very useful for him to fight the fascists.

Did not know. And he grew up like an ordinary boy: restless, desperate, sharp on his tongue and quick to fight if he had to stand up for himself. I really wanted to be like my father.

The outbreak of war in the first days made their noisy house empty - a father and four older brothers went to the front. Sasha also wanted, brought a statement to the military enlistment office, where he ascribed to himself a couple of years (at that time he was only sixteen). But the boy was sent home, saying a very offensive for him, “Mal is More!”.

And Sasha stayed at home, helped his mother and elder sisters Maria and Vera.

But the Nazis reached Stalingrad. They captured Dar Gore, where the Filippov family lived (today Voroshilovsky district). And the boy, eager to fight with all his heart, could not sit at home. At night, he crossed the front line along the beams, sought out the military unit of Senior Lieutenant Semenikhin and asked for them. Sasha did not come empty-handed to the unit — he brought valuable information from the hell itself. And the men took him as a scout. Here the shoemaking craft came in handy: the fascists themselves took Sasha to the nazi community — to shoemaker. They did not suspect that this ragged brisk boy with a bag over his shoulder was a scout. During the day he was engaged in shoemaking, repaired shoes to the invaders, and at night often crossed the front line, bringing valuable information. The Germans were looking for a whole detachment of adult male cohesive, because they clearly understood that Soviet intelligence was working properly.

Even as regularly! Sasha went on assignments twelve times, without fear of any difficulties. Once, getting to his people, he swam across the Volga on a log and reported on the location of enemy firing points in the vicinity of the Krasny Oktyabr factory - the very next day Soviet pilots bombed them. Another time at night, he threw a grenade at the headquarters window. In the morning, the fascists were looking for a saboteur, and he played with the kids in the classics under the very nose of the enemies.

No, the fascists would not have guessed that this kid was a scout. But Sasha was tracked down by a local policeman named Zabrodko. Has handed over the enemies.

For ten days the soldiers were waiting for Sasha. They were digging in the snow - they thought they would have to fight off the fascists. But Shkolnik did not betray anyone. He was tortured for a long time, beaten - but they never learned anything. Sentenced to hang.

21 December 1942, the mother saw her son at the building of the German commandant’s office. “Don't cry, I'll run away anyway!” Sasha told her then. He did not give up ...

December 23 on Dar Gore, in the area of ​​the former Church of the Annunciation - it was a place of execution - came barely alive from grief Evdokia Afanasyevna. She saw that Sasha, though he had difficulty dragging his legs from beatings, was not broken. And even a few minutes before the execution, he found the strength in himself, knocked down the executioner and ran ... He was caught up, hit with bayonets. And dragged to the gallows. Before you die, Sasha shouted: “Hang up, executioners! All do not hang! All the same, ours will come and kill you like mad dogs! ”...

... Here are the lines from the survey of the grave of Sasha Filippov’s and Masha Uskova’s scouts who died in Stalingrad (that day they were on assignment together): Filippova Alexander Alexandrovich, 1925, born in Stalingrad, on Bryansk Street, 83, has traces of bloody torture ... a piece of rope is tightened around the neck of the tortured - after the torture, the young man was hanged. The bodies of the tortured are buried in the square on the workers' and peasant street of Stalingrad. The act was signed by Simonenko, Semenikhin, Nazarov, Maryasin, Gerasimov ... ”The full text of this act was published in the newspaper“ Stalingradskaya Pravda ”, which was published on 17 on April 1943. 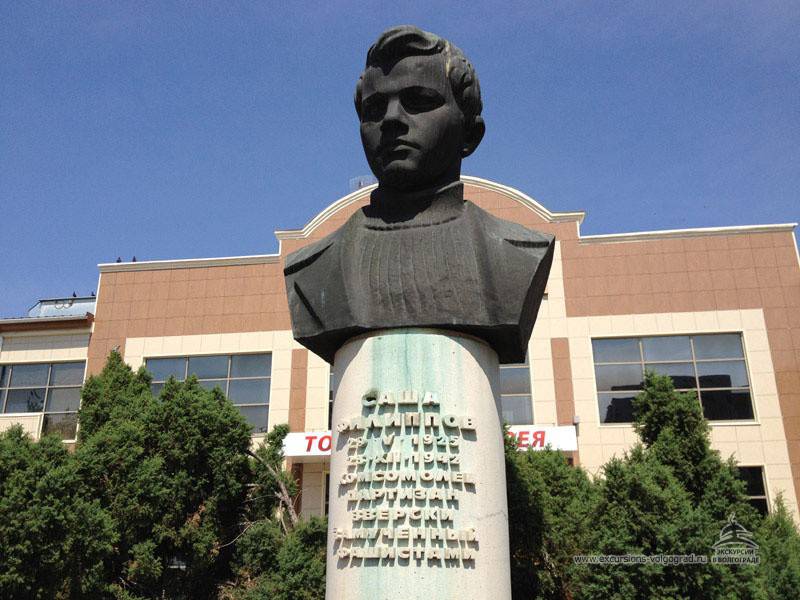 The young intelligence officer was buried in the public garden of Voroshilovsky district (now he bears the name of the hero). Posthumously, Sasha was awarded the Order of the Red Banner and the medal "For the Defense of Stalingrad." On his grave now stands a granite monument with the inscription: “Sasha Filippov. 1925-1942. Komsomol member-partisan. Brutally tortured by the Nazis "...