19 May 2016
76
Deputies of the Verkhovna Rada of Ukraine made the final decision on renaming the city of Dnepropetrovsk. It is reported that the renaming of the city occurred within the framework of the law on so-called de-communization. The “decommunization” reached Dnepropetrovsk due to the fact that its name is associated with the name of a member of the Central Committee of the RCP (B) - VKP (b), Secretary of the Ekaterinoslav Council of Workers' Deputies Grigory Petrovsky (1878-1958). Now in Ukraine, Grigory Petrovsky is considered by the authorities to be the “organizers of the Holodomor”. 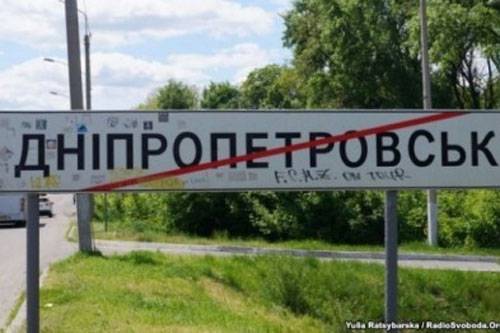 For reference: Dnepropetrovsk got its name in 1926 year. The first official name of the city is Yekaterinoslav (before 1796). Then the city changed its name several times, turning it into Novorossiysk (to 1802), then again to Yekaterinoslav (to 1926).

From the resolution VRU:
The city got its present name Dnepropetrovsk in 1926 by the name of the river and in honor of the party, Bolshevik and Soviet leader, the leader of the revolutionary movement and the chairman of the Central Executive Committee of the Ukrainian SSR - G.I. Petrovsky (1878-1958), who later became one of the initiators of the organization of the Holodomor 1932-33. The name carries the symbolism of the communist regime and, according to the law, must be changed.

Ctrl Enter
Noticed oshЫbku Highlight text and press. Ctrl + Enter
We are
175 of new names of territories and settlements appeared on the map of Ukraine within the framework of the law "On decommunization"
Military Reviewin Yandex News
Military Reviewin Google News
76 comments
Information
Dear reader, to leave comments on the publication, you must sign in.