19 May 2016
75
On Wednesday, the State Duma adopted in first reading a package of bills on the Federal Service of the National Guard (Rosgvardiya), which is being created in accordance with the presidential decree signed in April, RIA News. 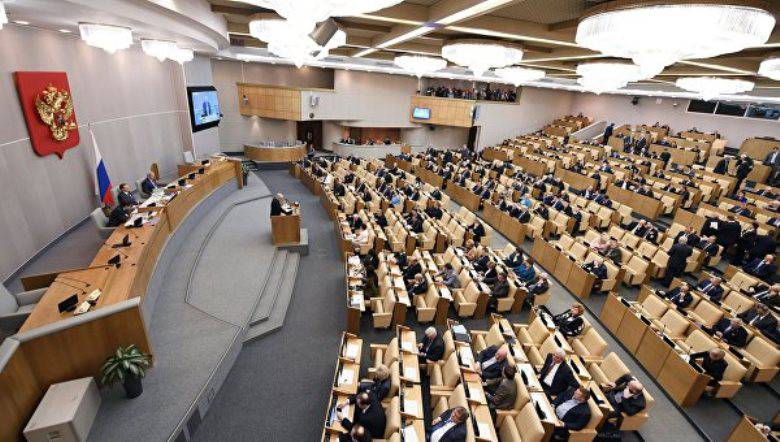 The new service will deal with the fight against terrorism and organized crime.

The draft law assumes that, in principle, employees of the service have standard rights for the law enforcement agency: the use of force, weapons, combat and special equipment to ensure public safety, inspections, detentions, etc.

In Rosguards it will be possible to serve in conscription, its ranks will also be able to replenish the Cossacks.

The members of the Duma’s defense committee proposed, in addition, to allow the new department to use artillery and Aviation "To suppress the activities of illegal armed groups and their elimination."

And the Communists proposed to supplement the structure of the service with an operational unit.

“First of all, there is a sense of lack of thought in this issue. From the subordination of the Ministry of Internal Affairs derived the main combat units. And what happens? The Ministry of Internal Affairs loses a power component, and Rosgvardiya does not receive an operational unit. And, ultimately, at the same Khovansky cemetery there was clearly operational information about the upcoming demolition, but so far the authorities agreed on what to do, received three corpses and 30 injured, ”
said MP Vyacheslav Teterkin (Communist Party).

“Departmental barriers will clearly impede operational work on the detection and prevention of crimes. That is, almost inevitably, the Rosguard will be forced to create its own operational units. Thus, turning from a military formation into a new special service, ”he added.

According to the head of the inter-factional group on the interaction of civil society institutions with law enforcement agencies, Mikhail Starshinov (United Russia), the deputies are “ready to consider any constructive proposals of the new service on legislative support for its work”.

“In my opinion, the National Guard should be a qualitatively new proposal for citizens in the area of ​​ensuring law and order in the Russian Federation in the broadest sense of the word and providing services to the population - from security activities to issuing weapons permits. There is every reason to believe that work in these areas will meet the requirements and aspirations of our citizens, ”said Starshinov.

“Rosgvardia is the national protection of public and state interests. The set of tasks entrusted to the national guard is extremely important. The National Guard will provide a qualitatively new level of resistance to modern threats, such as terrorism, extremism, organized crime, and therefore provide maximum protection for the life and security of Russian citizens, ”said the head of the security committee, Irina Yarovaya (EP).

The Liberal Democratic Party called the package of bills on the National Guard under "the main issue on today's agenda."

“We need to understand that today, when there are a lot of external and internal challenges to our security, state sovereignty, we need a single structure of cohesive structures acting according to a single plan that will ensure both public security and the inviolability of our borders,” said Alesya Didenko (LDPR) .

“Fair Russia also supports the initiative to create the Rosguards. We consider the adoption of this law to be absolutely correct. First of all, the renaming of the Internal Troops into the National Guard is perfectly justified. What could be the Internal Troops? The army must ensure the external security of the country, and within the country the problems of ensuring stability and security must be solved by the troops of the National Guard - just like in most countries of the world ",
said the first deputy head of the CP faction Mikhail Emelyanov.

He noted that the Rosguard can not be considered "as a kind of repressive institution."

Ctrl Enter
Noticed oshЫbku Highlight text and press. Ctrl + Enter
We are
The action “Military service under the contract is your choice!” In Rostov-on-Don: future contract servicemen, exhibitions and “Russian Knights”
Military Reviewin Yandex News
Military Reviewin Google News
75 comments
Information
Dear reader, to leave comments on the publication, you must sign in.