Heroes of Donbass do not die 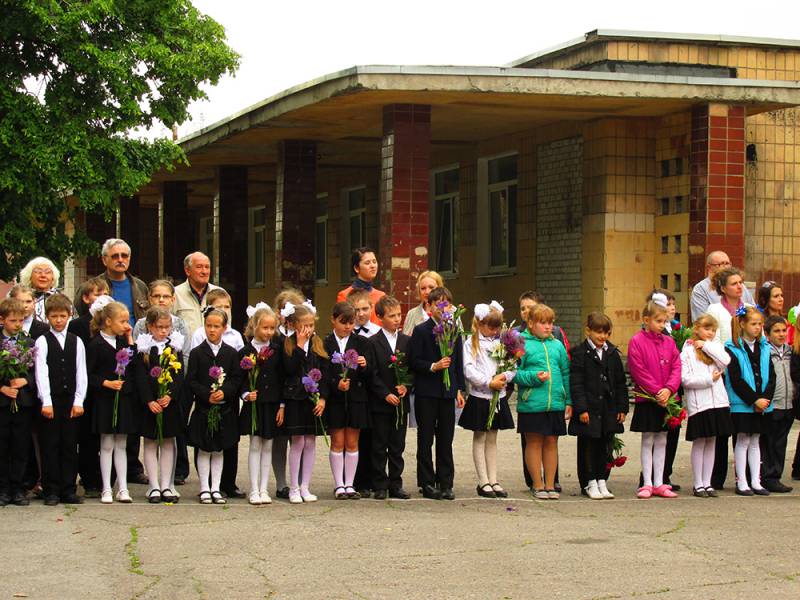 Donetsk, Partizansky Avenue ... Today he reaffirms his heroic name. It belongs to the Kievsky district, and the northern part of this area is called Putilovka. It is difficult to make even a step without stumbling upon the sad consequences of the shelling of the troops of the Maidan junta. 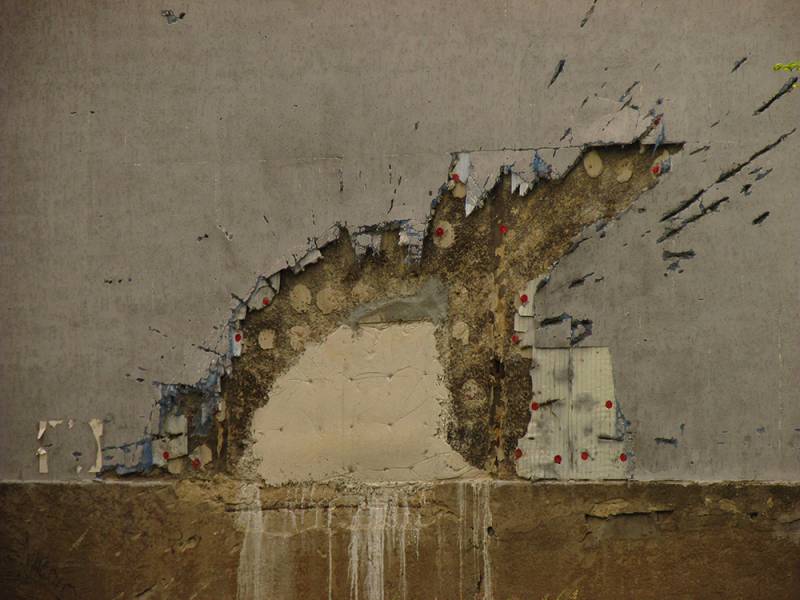 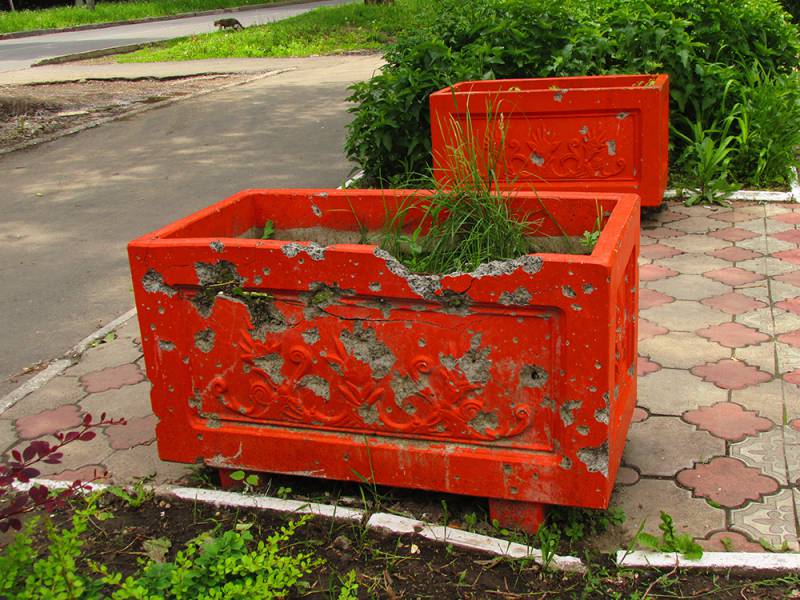 The Putilov market was once very busy, today it is closed. Still would… 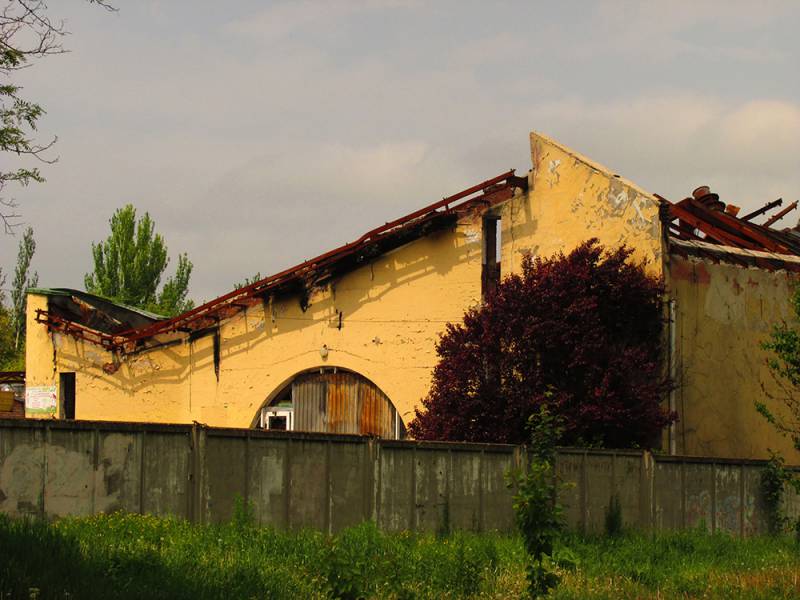 People, as they can, try to patch up the destruction, to improve their life - it is necessary to live. But how many such cases - hoped on the Minsk peace agreements, put new windows instead of broken windows. And then one arrival - and all the work down the drain. 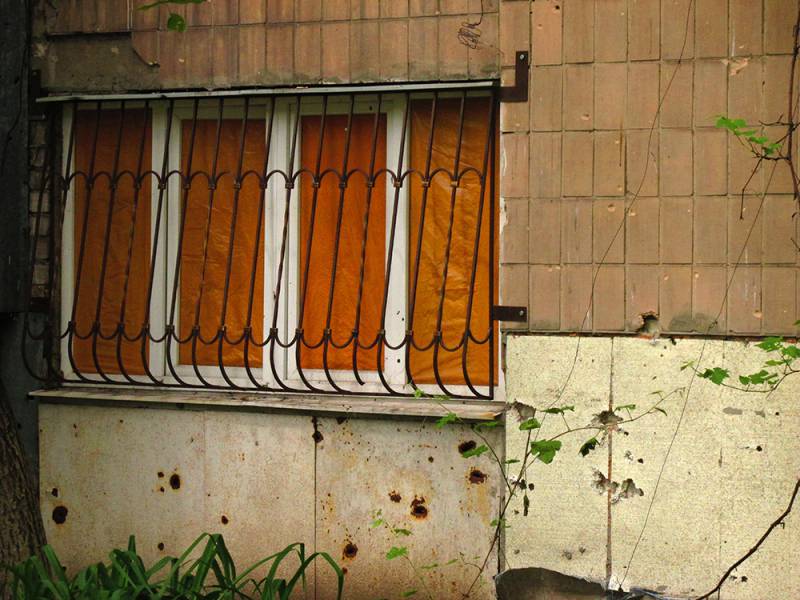 Donetsk Parish School No. XXUMX is located on Partizansky Avenue, which also did not avoid hits. I already had to write about this school, when on its facade opened a memorial plaque in honor of the Hero of the Donetsk People's Republic Oleg Grishin, call sign "Bear". He died at the legendary height of Saur-Tomb, causing a fire on himself. 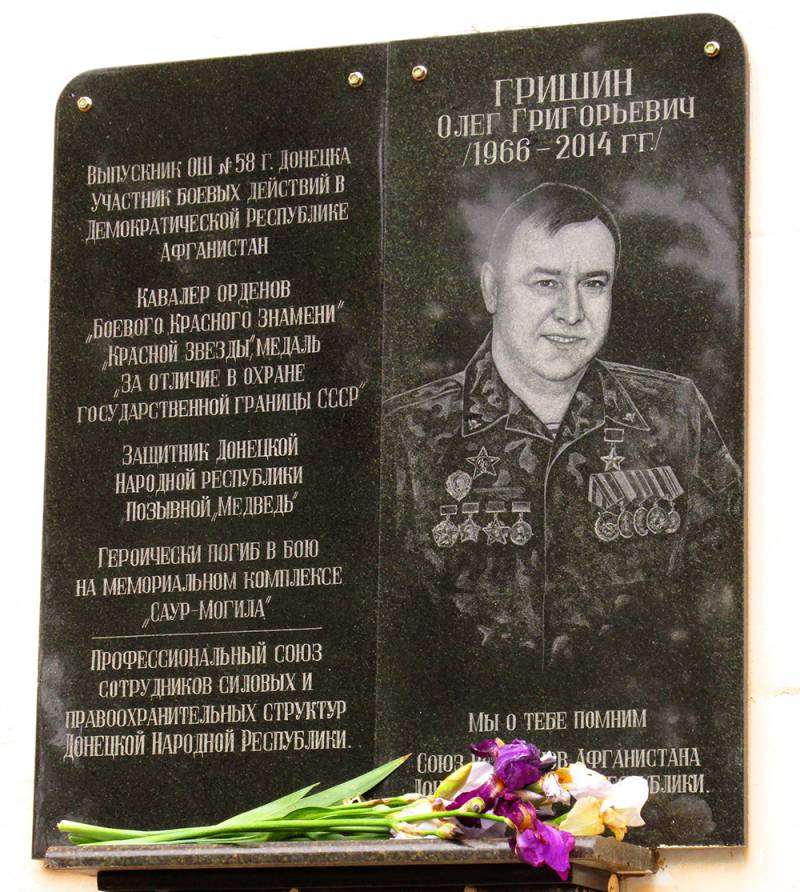 This small memorial is sacredly protected by students and teachers, and there are always flowers near it.

However, 18 May had to open another one next to this plaque - the number of dead defenders of Donbass is growing. Pupils of the same school №58 were two more fighters: Dmitry Vladimirovich Prely and Alexey Alexandrovich Fedotov. Were ordinary boys, of which the teachers preserved fond memories. But to their lot fell the war, with which they did not return. 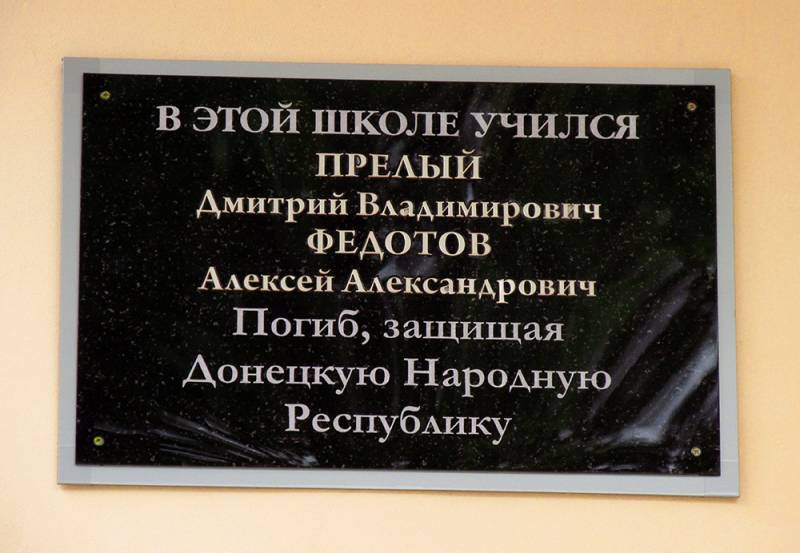 Both younger students and high school students lined up at the school door with flowers. A plaque to two graduates of the school was opened in the framework of the action "Heroes do not die." The corridors of this school remember the laughter and cheerful steps of these recent boys, who certainly had their own dreams and plans for life. Dreams and plans, crossed out Maidan and the subsequent war unleashed against the Donbass. 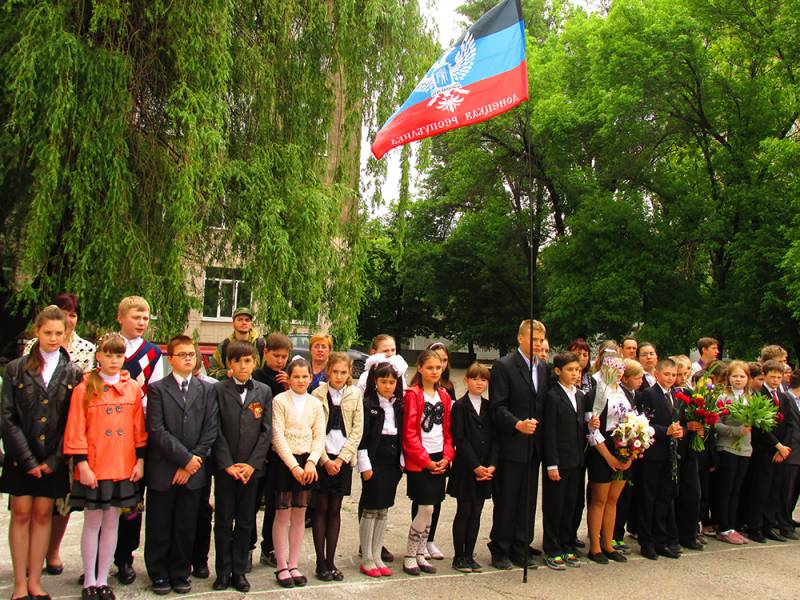 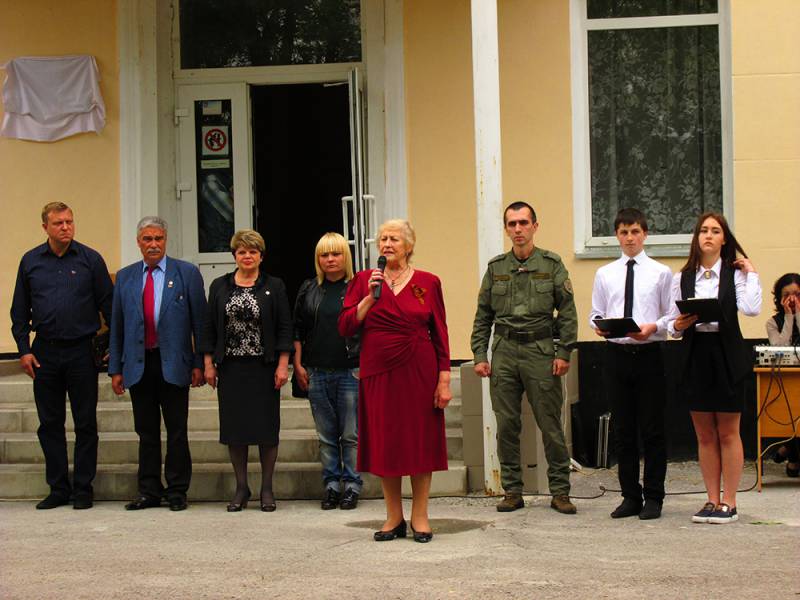 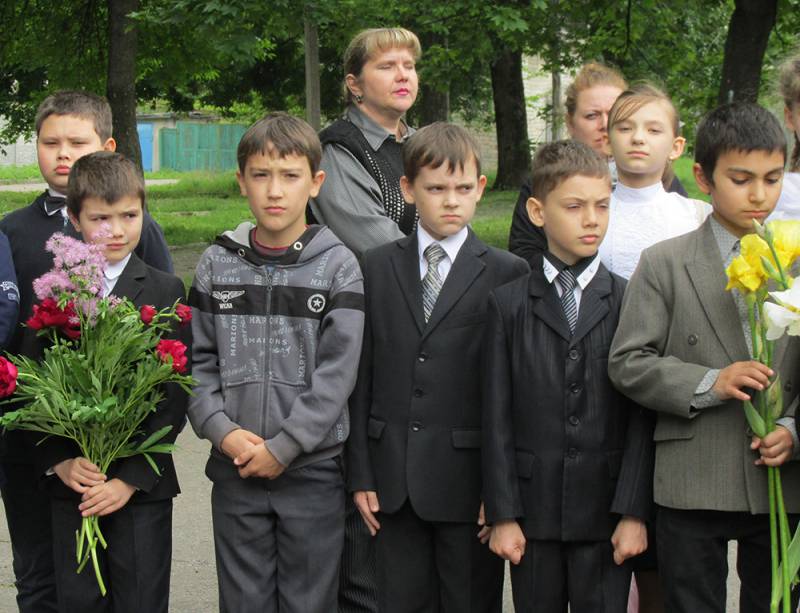 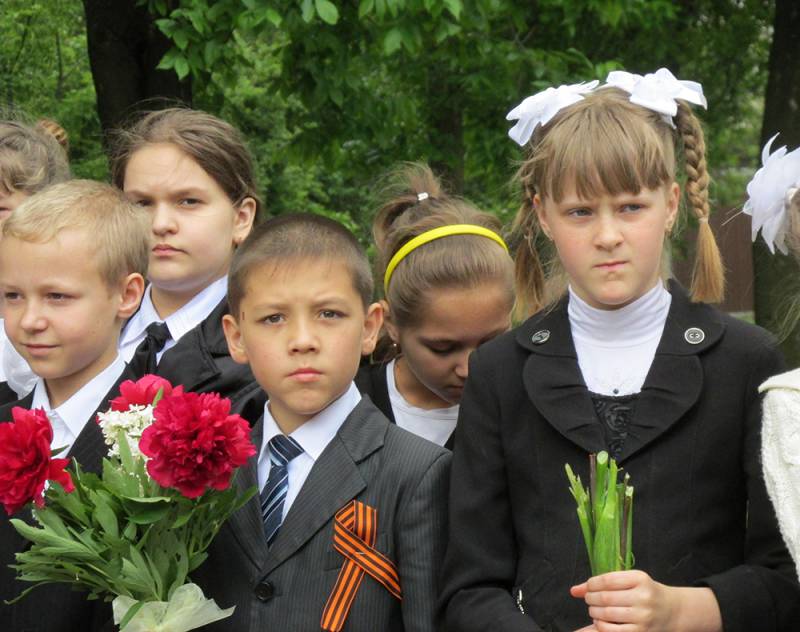 Keeps school and other memories - about the shelling to which it was subjected. A few months ago, when a memorial plaque was opened in honor of Oleg Grishin, the traces of the shells were clearly visible. Now the school has been partially repaired, and the consequences of the shelling, which she, the students and the workforce had to endure, are no longer so striking.

The director of the 58 School, Claudia Kharkovskaya, recalled the dead children with warmth: “Sometimes, we were indulging. Perform all tasks. We won in competitions and contests. We remember them today. ”

She also remembered Oleg Grishin and the day when a memorial plaque was opened in his honor: “Here he studied, closed his comrades and died the death of the brave on Saur-Grave. Many heroes, they do not list, we have Putilovka. How many underground workers who studied in our school! Alexander Vladimirovich Zakharchenko, opening the memorial plaque to Oleg Grishin, said - this is a heroic school. We will be guys, and we are heroes. We will love our school and your land. And we will always keep in the memory of those who died for our freedom, for the world ... They bomb, and we learn. They shoot, and we will live and win. And here on this school ground 2 May (2015 g.) 19 min flew. It was 19 funnels. They said, they say, it was not we who shot, they are “militants”, “separatists”. And the director of this school, they say, educates militants and terrorists. No, guys. We educate patriots, educate heroes, educate honest, real people who will always protect their homeland and remember those who are not with us. ”

The honorary right to open the memorial plaque was granted to the guests of honor - Deputy of the People’s Council of the DPR Yaroslav Korotenko and Deputy Head of the Administration of the Kievsky District of Donetsk Oleg Meshko. 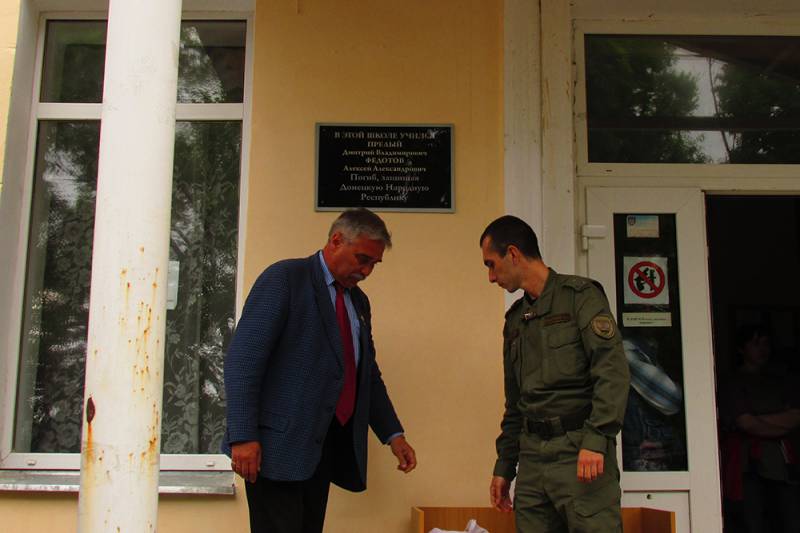 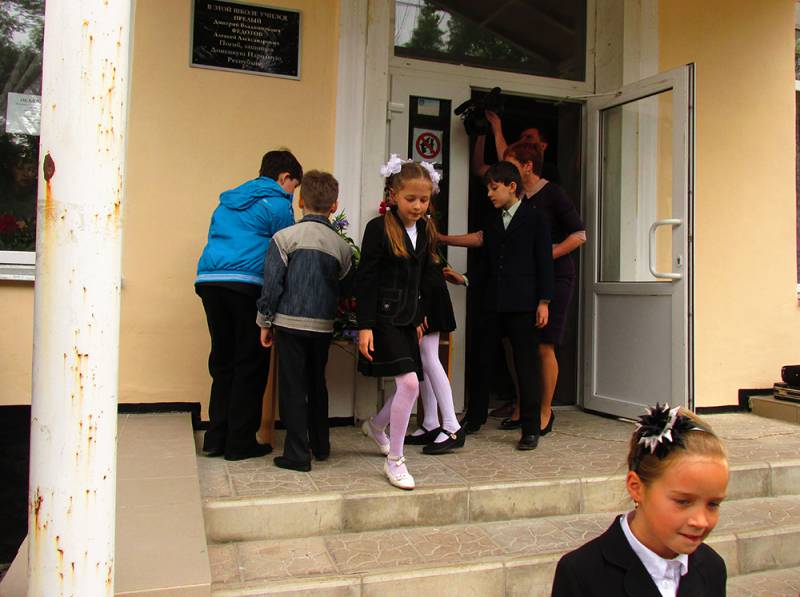 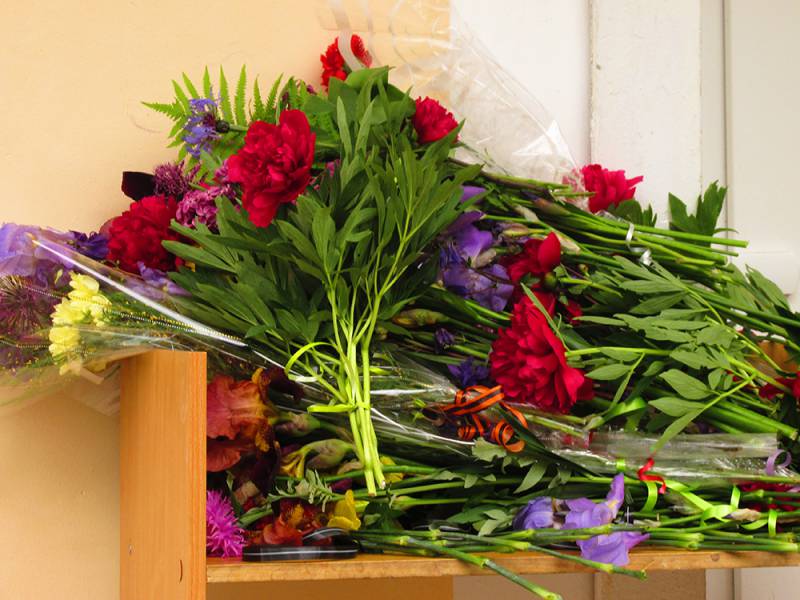 Yaroslav Korotenko in his speech said: “More than two years ago, enemies came to our land who wanted to conquer our Donbass. Thanks to people like those in honor of whom we are opening a plaque, thanks to those who defended the Republic, our homeland will flourish. The most important thing is that the feat that our fighters, our brothers, accomplished was never forgotten. Remember these guys. ” 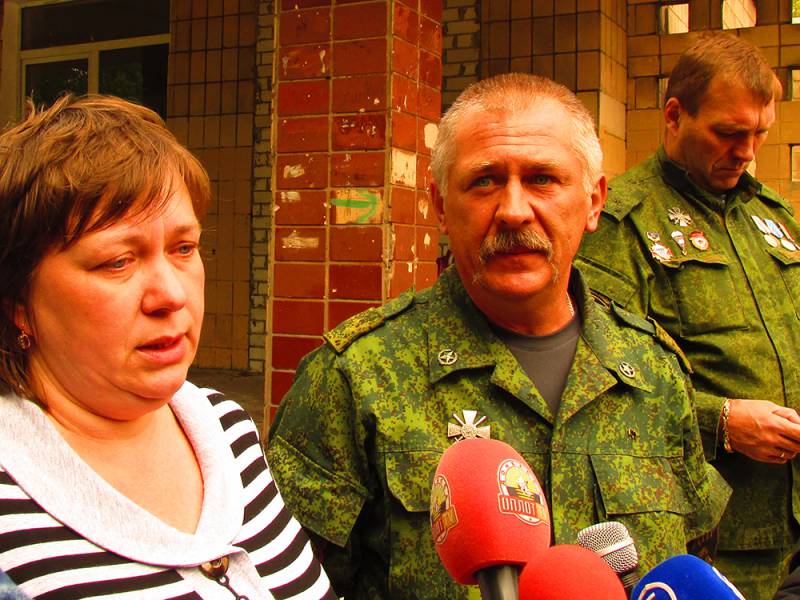 25-year-old Dmitry Prely in his family was the only son, his father continues to protect his native land. And leaving 22-year-old Alexey Fedotov, asked the mother for a blessing ... Now parents, as well as teachers and friends, have only the memory of the children. But nothing can compare with the pain of mothers.

Ctrl Enter
Noticed oshЫbku Highlight text and press. Ctrl + Enter
We are
In Donetsk, opened a memorial plaque in memory of the hero Oleg GrishinWinds over Saur-Grave
Military Reviewin Yandex News
Military Reviewin Google News
9 comments
Information
Dear reader, to leave comments on the publication, you must sign in.