Willys MB: the most massive jeep of the Second World War

19 May 2016
38
Today, the American SUV since World War II is easily recognizable in any photographs of the military and post-war years, it is a frequent guest on the silver screen not only in the documentary chronicles, but also in almost all tapes about this war. The car during his life became a real classic and gave the name to a whole class of cars. Currently, the word “jeep” denotes any car that has a good cross in off-road conditions, but initially this nickname was assigned to a very specific example of technology, whose fate was closely intertwined not only with the United States, but also with history our country.


This story began in the spring of 1940, when the US military formulated technical requirements for the design of a light commander and reconnaissance vehicle with a quarter-ton carrying capacity with the wheel formula 4х4. The tight deadlines of the announced competition quickly knocked out almost all possible applicants from it, except for two companies, American Bantam and Willys-Overland Motors, which were later joined by a recognized American auto giant, the Ford concern. More information about the history of the appearance of American jeeps, unfair for some and triumphant for others, you can find out Article "Bow": the first Jeep Lend-Lease.

After ordering to each of the three participants in the contest of cars for 1500 copies, the company “Willis” was finally recognized as the winner, which began mass production of the army all-terrain vehicle under the designation Willys MB from 1941. Since 1942, the concern Ford has joined the production of a licensed copy of "Willis", the car was produced under the designation Ford GPW. In total, until the end of the Second World War, American factories collected in aggregate more than 650 thousands of cars, which were forever in history with the first “jeeps”. At the same time, the release of the Willis continued after the war. 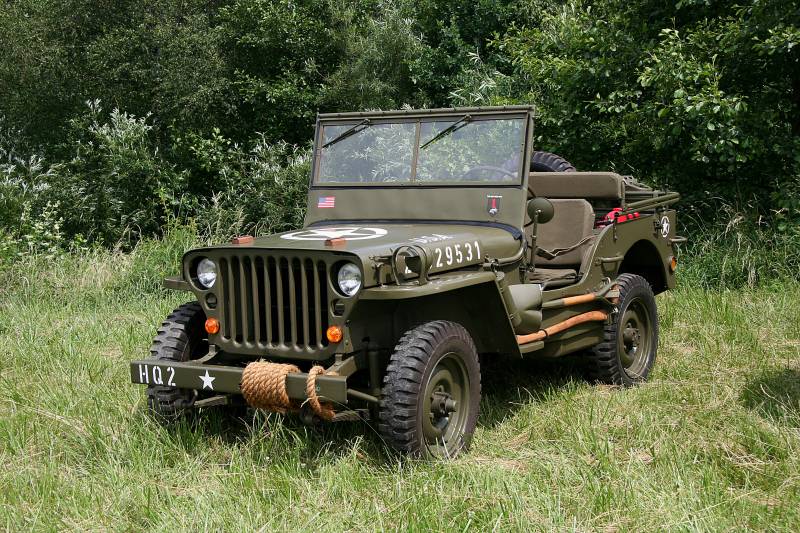 Under the Lend-Lease program during the war years, the USSR received about 52 thousands of “Jeeps”, who fought on all fronts of the Great Patriotic War. The first deliveries of American SUVs to the Soviet Union began in the summer of 1942. In the Red Army, the car quickly became popular and was widely used in a variety of roles, including as a light artillery tractor, which was used to tow 45-mm anti-tank and 76-mm divisional guns.

Where exactly came the nickname Jeep (Jeep), it is not known until now. In one of the most popular versions, this is the usual abbreviation for the military designation of cars General Purpose, GP, sounds like a gi, or jeep. According to another version, it all comes down to the American military slang, in which the word "jeep" denoted untested vehicles. In any case, all the “Willys” started calling jeeps, and Willys-Overland Motors itself in February 1943, at the height of the war, registered the Jeep trademark. At the same time, in Russian, this word was firmly established for all imported off-road vehicles, regardless of the manufacturer’s company.

In the United States during the Second World War, jeeps were produced at two factories - Willys-Overland and Ford. It is worth noting that the cars of these two enterprises were almost completely identical, although they had a number of small differences. So, at the very beginning of production, Willys MB and Ford GPW had a vystampovka with the name of the manufacturing company on the rear walls of the car, but over time they decided to give it up. At the same time, an experienced eye could always distinguish a Ford car from a Wilis car. In the Ford SUV, the transverse frame under the radiator was made profile, while the Willis had a tubular one. The brake and clutch pedals on the Ford GPW were cast, not stamped, as on Willys MB. The heads of some bolts were marked with the letter “F”, in addition to this, the rear glove compartment covers had a different configuration. During the war years, the company Willys-Overland produced about 363 thousands of SUVs, and Ford manufactured about 280 thousands of cars of this type. 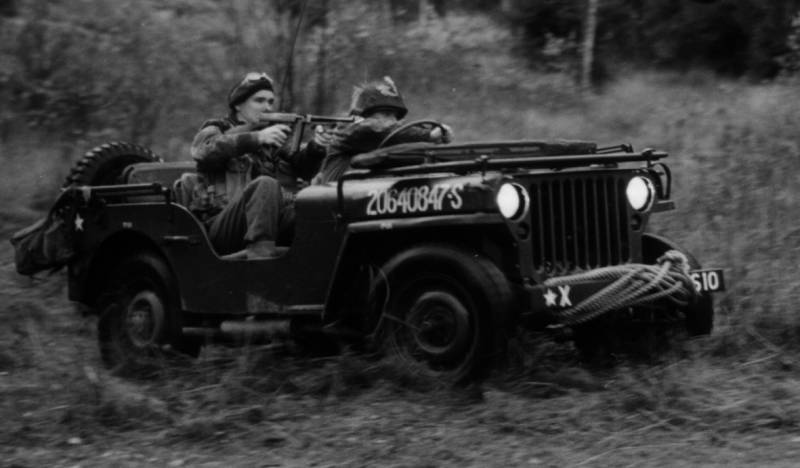 In a very simple-looking body of a military SUV had its own characteristics. The main ones are the complete absence of doors, the presence of a folding canvas top and a windshield that flips to the hood of the car. A spare wheel and a canister were fixed on the outside of the back of the jeep, and a shovel, ax and other entrenching tools could be placed on the sides. For the sake of the military purpose of the car designers have placed the fuel tank under the driver's seat, every time you refuel the seat had to be reclined. Headlights "Willis" were slightly recessed relative to the grille line. This detail was directly related to the peculiarity of their attachment: you could loosen one nut, after which the optics immediately turned the diffusers downwards, becoming a light source during the night repair of the car or allowing the jeep to move in the dark without using a special blackout device.

The supporting element of the Willys MB body was a spar frame, with which, with the help of springs supplemented with single-acting shock absorbers, continuous axle bridges equipped with locking differentials were connected. As the power plant on the car used in-line 4-cylinder engine displacement 2199 cm 3 and hp power 60. The engine was designed to use gasoline with an octane rating not lower than 66. It was combined with a mechanical three-speed gearbox. With the help of a transfer case, the front axle of an SUV could be turned off, as well as downshifting. An important feature of a lightweight, mobile, but narrow army all-terrain vehicle was the drum brakes of all wheels with hydraulic drive. In this compact and lightweight jeep could easily overcome the ford to the depth of 50 cm, and after installing special equipment - to the 1,5 meter. The designers even provided for the possibility of getting rid of water that could have accumulated in the box body. For this purpose, a special drain hole with a plug was made in the bottom of the car.

The transmission of the car used a two-stage razdatka Spacer's Dana 18, which, when turned on by the downshift driver, reduced the number of revolutions going from the box to the axles 1,97 times. In addition, it also served to turn off the front axle while driving on highways and paved roads. The jeep's fuel tank could hold almost 57 liters of fuel, the carrying capacity of a small car reached 250 kg. The steering control used the mechanism of the company "Ross" with a worm gear. At the same time, there was no power steering in the steering system, so the steering wheel of the jeep was quite tight. 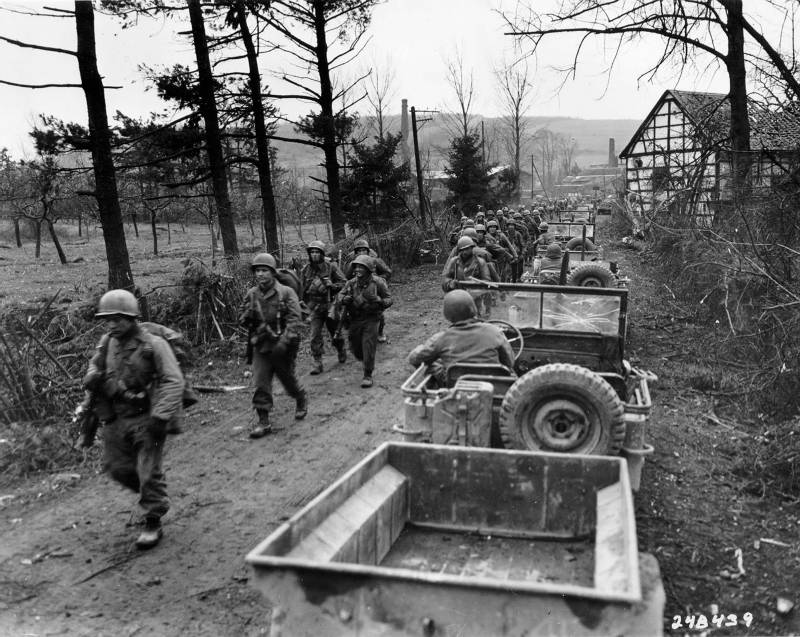 Open doorless body, designed for four people and the installation of a lightweight removable canvas top, was all-metal. His equipment was truly spartan, on the principle - nothing superfluous. Even the wipers on this car were hand held. The front glass of the car had a lifting frame, to reduce the height of the jeep, it could lean forward on the hood. Both tent-shaped arcs of the tubular form in the folded position coincided along the contour and were located in a horizontal plane, repeating the outlines of the rear part of the Willys MB SUV. Behind a tent of protective color instead of glass there was a large rectangular opening.

Speaking about the Willys MB car, it is difficult not to mention the exceptionally successful, thoughtful and rational design of the body shape, as well as its unique charm, which has survived to the present day. The aesthetics of the SUV was immaculate. This is the case when, as they say, neither subtract nor add. In general, the jeep was perfectly arranged. Designers managed to provide a convenient approach to the units and components of the car during their dismantling and maintenance. Also, "Willis" had excellent dynamics, high speed on the highway, good maneuverability and sufficient maneuverability. The small dimensions of the vehicle, especially its width, made it possible to drive along the frontal forests, which were accessible only to infantrymen, without any particular problems. There were car and pronounced flaws, which include low lateral stability (the flip side of a small width), which required the driver to competent management, especially when cornering. Also, a narrow gauge often did not allow the car to fit into the track, which was broken by other machines.

The color of the whole car "Willis" was made without exception in the color of "American khaki" (which was closer to the olive color), while it was always matte. Tires of the car were black and featured a straight tread pattern. The steering wheel of a jeep with a diameter of 438 mm was also painted in olive color. On the instrument panel there was a 4 pointer, including the speedometer, all their dials were also painted a protective color. When driving a car, doorways could overlap with special, detachable wide seat belts. 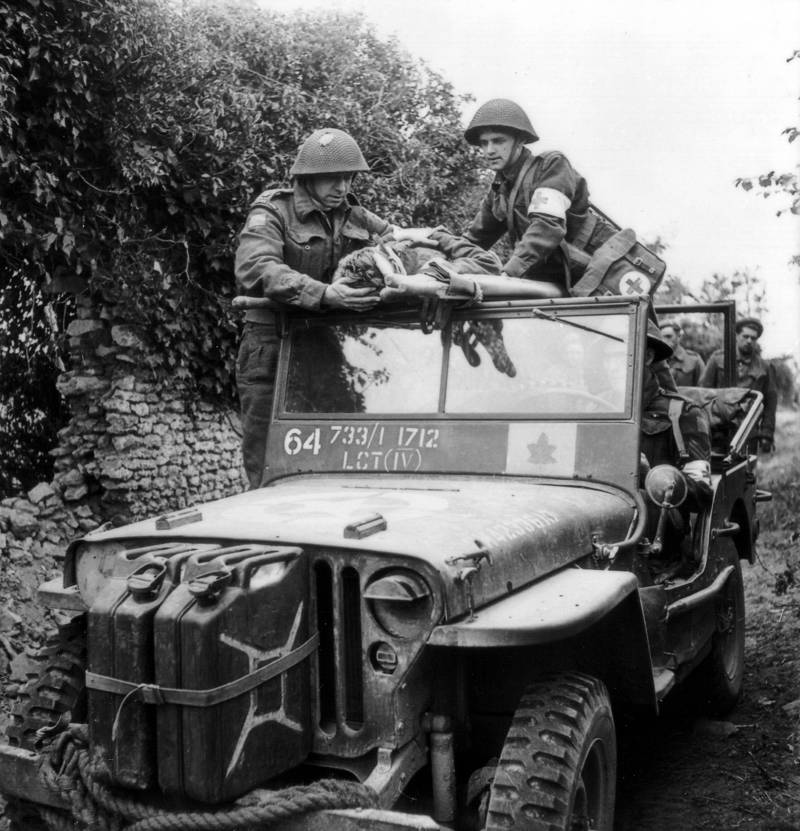 Starting in the summer of 1942, the Willis began to massively enter the USSR under the Lend-Lease program. American SUV has proven itself in the conduct of hostilities. Depending on the military situation and the type of troops, the vehicle served both as a reconnaissance commander and a tractor for cannons. On many "Willis" were installed machine guns, as well as other small weapon. Part of the ball machines was specially reworked for medical care - they were placed stretchers. Interestingly, in the Soviet Union, all the jeeps were known under the name "Willys", although many Lend-Lease SUVs were not products of Willys-Overland, but of Ford.

In total, about 52 thousands of cars of this type got into the USSR Some of these cars were delivered to the Soviet Union in disassembled form, in boxes. These American vehicle assemblies were assembled at special assembly sites that were deployed in Kolomna and Omsk during the war. The main advantages of this car include good acceleration and high speed, as well as good maneuverability and small size, which facilitated the camouflage of the jeep on the ground. The maneuverability of the car was provided by a good level of its cross-country ability and a small turning radius.

After the victory, the thousands of cars that remained on the move were transferred to the national economy of the country, where they carried not the military, but the collective farm chairmen, directors of state farms and various middle and lower managers. Sometimes, in the outback, even district committee workers drove these jeeps (possibly, following the example of Presidents Roosevelt and de Gaulle). Over time, cars from the army and from various civil organizations fell into private hands. Due to this fact, many copies of "Willis" survived in our country to this day, becoming real collectible copies. 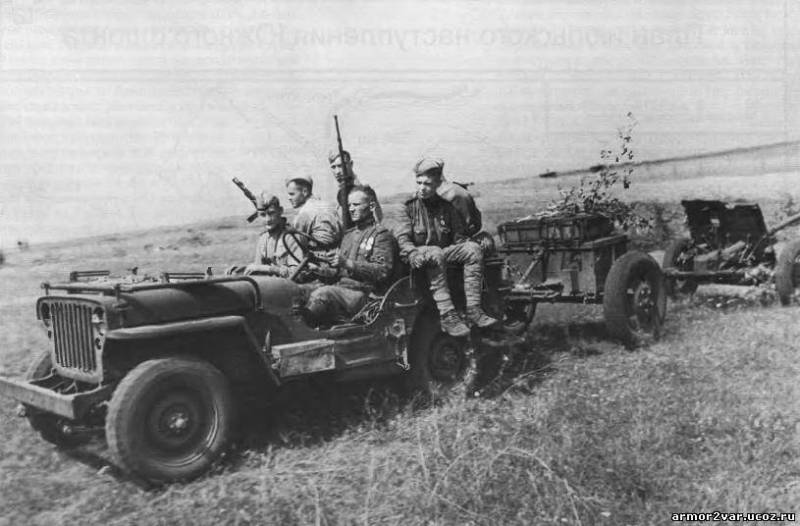