USA - Ukraine: gingerbread ran out, there was one whip 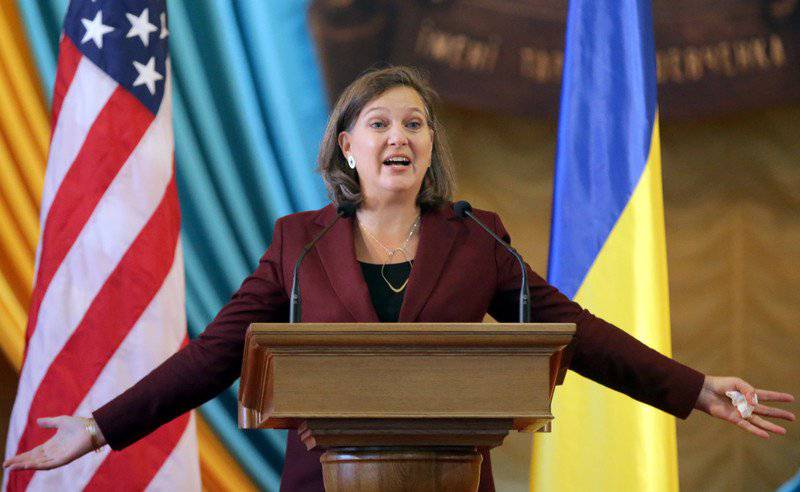 A month has passed since the last visit of Poroshenko to the United States, and nothing from the announced American support to Kiev has ever been received - neither a billion dollars of credit guarantees, nor the next tranche from the IMF. It seems that the Ukrainian-American two-year “honeymoon” has passed, and instead of the aroma of gingerbread, the whistle of whistles comes to America more clearly from Kiev. The White House is annoyed with the fact that the financial support of today's Ukraine does not give anything but the expansion of the scale of corruption. The more you give, the more they steal. In Washington, they are not satisfied with the excessively straightforward disruption of the Ukrainian side of the Minsk process without any attempts to depict their readiness to fulfill their part of the agreements. This makes it difficult for the United States to maintain a broad regime of sanctions against Russia.

Noteworthy is the 5 May article in the influential The Washington Post article under the characteristic headline “How Western aid exacerbates Ukraine’s dependence on bribes” (“How does it help?” It says that the West, they say, has repeatedly tried to put an end to the practice in which the overwhelming part of the financial resources coming to Ukraine was plundered there. In particular, for this reason, credit and loan lines provided by international financial organizations and individual states and companies were regularly suspended. Then, however, due to "political expediency" they were still unfrozen. Bottom line: for every dollar entering the country, it now accounts for $ 6,25, illegally exported from it. Only Privatbank of I. Kolomoisky in 2015 from an IMF loan of 4,51 received by Ukraine appropriated billion dollars and hid 1,8 billion dollars in offshores The Washington Post concludes that, apparently, this is an institutional problem: Ukraine’s reform demands alone are not enough; it’s necessary to completely replace the ruling elite in the country. The only question is whom to replace. Not a word about this in the article.

An insulting surprise was presented to Kiev by the main “passionary” of the Maidan Revolution - US Assistant Secretary of State Victoria Nuland, who distributed the gingerbread right on the Maidan. Official information about her visit to the Ukrainian wards at the end of April is rather stingy. However, much flows from the Kiev information sieve. Thus, the press service of the “Self-help” party cites the people's deputy, Victoria Voitsitskaya, that Nuland demanded that Ukraine amend the constitution as soon as possible, providing for “special status” for certain regions of Donetsk and Lugansk regions (ORDLO), held there elections and provided amnesty to participants in hostilities. Her thesis was that the “Minsk agreements” should be implemented before the end of 2016, there is no alternative to them. Although “Minsk” is bad, but Ukraine, as a state, agreed to it, ”Victoria Nuitskaya Voitsitskaya quotes as quoted by Nuland. With reference to their own "reliable sources" in the Ukrainian leadership, information about such an "ultimatum" on the part of a high-ranking State Department official is confirmed by the informed Mikhail Pogrebinsky.

In general, the position of the State Department, outlined by Nuland at meetings with Ukrainian representatives, including President Poroshenko, looks like this:

- Kiev is obliged to comply with the Minsk agreements, since there is no alternative for them and the Ukrainian state has undertaken to observe them;

- elections to ORDLO must take place no later than summer, and the full implementation of the Minsk agreements by the end of this year. The provision of the promised financial assistance will directly depend on Kiev’s readiness to follow the conditions of Minsk;

- European sanctions against Russia are likely to be extended in July, but the likelihood of their lifting in December is quite high;

- in case of reaching an agreement on holding local elections, heavy weapons and armored vehicles will be removed, and they will be located in designated areas under the supervision of the OSCE mission;

- The size of the OSCE mission and authority will be expanded; discusses the possibility of forming a special police contingent under the auspices of the OSCE, which should act as a guarantor of security on the territory of the Ordlo during the election campaign;

- the withdrawal of heavy weapons and equipment from the territory of the Ordlo can only be carried out after the local elections, according to a previously agreed plan;

- the process of restoring Ukrainian border control can begin only after holding local elections and subject to strict compliance with the Minsk agreements;

- Kyiv is obliged to comply with the full range of measures stipulated by the Minsk agreements, including the adoption of a law on a large-scale amnesty and the introduction of amendments to the Ukrainian constitution stipulated in Minsk;

- all parties should strictly observe the obligations stipulated by the Minsk agreements, but Ukraine should be the first to demonstrate its readiness to show goodwill.

“Principality” Nuland in relation to “Minsk” in Kiev is explained by the fact that she has a chance to occupy a high post in the US foreign policy department if she wins the presidential election of Hillary Clinton. However, the chance is realized only if Nuland succeeds in solving the problem of settling the conflict in the Donbas supervised by her. By all means, she needs to present at least some, albeit intermediate, but positive result.

And how to achieve the result needed by Victoria Nuland and her chiefs, if Kiev defiantly sabotages the Minsk process and pulls time, believing that it works for Ukraine? It could not go on like this for a long time, which Victoria Nuland also demonstrated to Kiev with her “Easter greetings”. Nothing personal, just business.

Another surprise from America and also through the women's line was the upcoming replacement of US Ambassador Jeffrey Payette to the personnel diplomat Marie (“Masha”) Jovanovic (an American of Serbian-Russian origin). Considering the role that Payette played in Ukrainian politics, who called “not only any minister, but also the president, on the carpet,” the appointment of a new US ambassador is comparable to the election of the head of the Ukrainian state. The White House is clearly distancing itself from those people whom he himself recently brought to power.

Unlike Payette, M. Jovanovic is not personally connected with the current ruling group. She is also known to be one of the leading American specialists in the post-Soviet states (she was the deputy head of the US diplomatic mission in Ukraine, ambassador to Kyrgyzstan and Armenia), and especially on state corruption. She already had to unravel the complex knots of financial abuse, which attracts American assistance. It is possible that the appointment of M. Jovanovic just foreshadows what the Washington Post called for - the change of the Ukrainian ruling elite. However, until now, with the personnel in Ukraine, the White House did not work, so there is no reason to believe that this time it will turn out better.

Ukrainian political scientist, full of pessimism, states the following words: “The Obama administration has given up, they have run out of tools to influence the situation in Ukraine. Only cardinal decisions remained, including those that would bring down our country. But until the new president of the United States takes the oath, the strategy will not change much, and we will continue to slide into the geopolitical pit. ”