How and where do Chinese PMCs work?

19 May 2016
12
China’s significant activity abroad inevitably requires security issues. Back in 2012, the American The Diplomat published an article on the prospects for Chinese PMCs. Translations of its fragments have also spread widely across the Russian-language segment of the Network. The material itself has not lost its relevance to this day, but since its publication, firstly, four years have passed, and secondly, China has declared the strategy of “One Belt - One Way”, making large-scale foreign infrastructure projects a priority of its external politicians. Correspondent On the eve.RU analyzed how the security companies of the Middle Kingdom solve problems that in the West are transferred to private military companies.


The Diplomat estimates that almost 5 million Chinese citizens and more than 16 thousand major Chinese companies legally work abroad. Only in Chinese state-owned companies and corporations outside China there are about 300 thousand employees. Many of these people and companies operate with a fair amount of risk to life and safety. Over 50 Chinese employees of these companies were killed from 2004 to 2012. in hot spots of the planet, not to mention missing, robbed, beaten, stolen. China has its commercial interests growing from year to year abroad, there are investments, there are people and objects, transport routes that require protection. Unlike citizens of Western countries, the interests of a huge Chinese presence in the world are practically unprotected.

For the first time, Chinese security companies came to the focus of world media attention in 2004, when one of the firms in China began to actively offer its security services to Chinese merchants abroad. It was about the services of bodyguards, which were recruited from the former employees of special military and police units in China. In 2007, for the protection of 600 Chinese diplomats in the country, a special consular protection bureau was set up abroad, which was responsible for the security of embassies and diplomats in the event of an attack or evacuation, but the officers did not have weapons. In 2009, the Chinese press seriously discussed the question of the possible dispatch of Chinese police forces to protect the copper mines of Chinese companies in Afghanistan. The biggest media hubbub was raised in 2012 when 29 Chinese workers were captured in Sudan in January (another was killed) and armed Chinese contractors of an unnamed Chinese PMC participated in the rescue operation along with the Sudanese military. 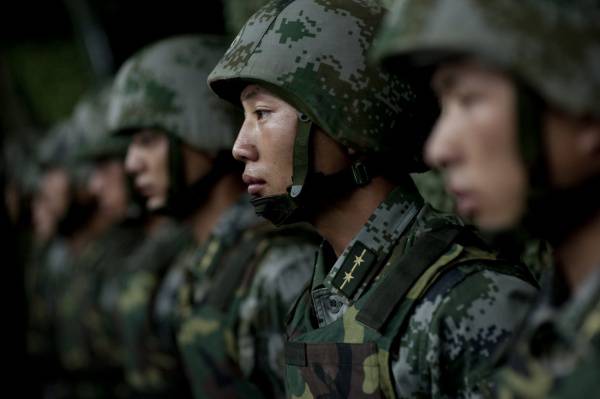 The advantages of the emergence of Chinese PMCs for Chinese companies are clear: they are cheap, professional, and most importantly - they are their own, native, speaking their own language. Chinese businesses in hot spots do not need to hire useless local guards, who themselves will surrender foreign workers at first risk, and do not lose face, pride and company secrets by hiring Western private military companies.

The minuses of the formation of the Chinese PMC industry in the world: there is still little experience working abroad, language barriers, and not always the most positive attitude of local residents towards the growing number of Chinese in their countries.

Chinese shipping companies are demanding protection from sea pirates and are also not averse to aboard armed Chinese guards, as the services of the Chinese Navy are not enough. In recent years, only Somali pirates seized a dozen Chinese ships off the coast of Africa. Chinese marine PMCs would be more than an adequate response for ships under the Chinese flag and ships with the predominant number of Chinese sailors on board.

Another obstacle is the lack of necessary domestic legislation, the indecision of the Chinese authorities themselves and their well-founded fear that the appearance of Chinese armed fighters, whether on the “black continent” or at another point on the planet as part of PMCs (as a result: possible armed clashes and the death of local bandits— Rebel terrorists-random civilians) can put a fat cross on the advantageous position of China’s “political non-interference” in the affairs of other powers.

Officially, China has consistently denied the participation of its PMCs in operations outside the country. For example, the Chinese side categorically denied the message about the use of Chinese PMCs in Sudan from the Wall Street Journal. It is claimed that only Sudanese soldiers participated in the operation, some of whom had equipment supplied from the PRC. In 2013, the site published a series of photographs, allegedly of employees of Chinese PMCs made in Myanmar. In this country, many farms and enterprises belong to businessmen from the Middle Kingdom, whose interests are protected by people with weapons in uniform without insignia. Interestingly, with them, the Soviet Kalashnikovs, or their Chinese equivalent Type-56, are not widespread in the world, but Western-made weapons: Beretta 92, Norinco and Ruger P89.

In winter, in the spring of 2015, when civil war resumed in the Kokang region near the Burmese-Chinese border, the media of Myanmar repeatedly declared the killing or capture of Chinese officers. True, as evidence, only photographs of men of Asian appearance in civilian clothes were presented. 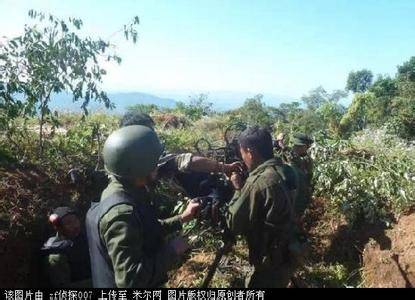 Conflict in myanmar
Some Chinese media allowed volunteers from the Middle Kingdom to participate in the war, who may have previously served in security forces. The position of official Beijing is that all the Chinese who fought in Myanmar are ethnic Han Chinese, natives of this country, and none of the citizens of the PRC took part in the hostilities. And while there is no evidence of the participation of the Chinese armed forces or PMCs in the conflict in Kokang.

Meanwhile, all three of the prototype PMC companies mentioned by The Diplomat continue their work to this day. Thus, the Shandong Huawei website mentions that the company is privately owned, but was created in 2010 on the basis of a previously existing state security structure. In September, 2014 in Hong Kong created the Chinese Security Industrial Alliance, abbreviated CSIA, which united security companies from the PRC, Hong Kong, Macau, and Taiwan around 50. Among them is the previously mentioned "Shandong Huavei." Thus, the activities of security companies and prototypes of PMCs are built in the conditional “Chinese world”: security industry specialists from the PRC are joining forces with unfriendly Beijing Beijing Taiwan. In December, 2014's Shandong Huawei office was opened in the city of Johanessburg in South Africa, so this company became the first Chinese company to provide security services to Chinese businessmen and immigrants in Africa.

It is also interesting that from 2014, periodically there is evidence of cooperation between Chinese security companies and Russia. So, according to the Asian press, Shandong Huawei starts cooperation with Russian companies specializing in the development of security technologies. October 29 2014 Beijing signed a strategic agreement between Huawei and Rostec. It dealt with such issues as the safe transportation of dangerous and secret goods; implementation, installation and maintenance of security systems and fire safety equipment; Information Security. As part of this technology cooperation, the Huawei delegation in August 2015 also visited Russia.

Another high-profile private company, Alfa-Angel (Beijing Co), established in Beijing by Israeli Army Special Forces veteran Adi Talmor, conducts basic security courses in China for employees of Chinese companies operating in the Middle East. The unit consists of approximately 130 fighters - former members of the Chinese security forces. Preference is given to those who served in the Marine Corps, the elite anti-terrorist unit "Snow Leopard" or the special forces of the Xinjiang Uygur Autonomous Region. At the same time, only services for security personnel training and risk assessment are officially offered. Among the customers on the Alfa-angel website are the oil giants China, CNPC and Sinopec. Beijing General Security Service, which actively works with overseas customers inside China, was founded back in 1996, and is still not in a hurry to enter the international market, believing that in addition to the lack of domestic regulatory legislation, Chinese fighters are not yet able to compare in terms of training and experience with employees of Western PMCs and are not ready to work in hot spots. Although the leadership of the Beijing General Security Service and acknowledges that a number of Chinese security companies, not particularly advertising their activities for political and legal reasons, works abroad. Thus, in China, the activities of PMCs are still facing a number of obstacles.

And yet, it should be noted that, firstly, as in Russia, the activities of military companies are not legally allowed here and therefore they have to conduct official activities as security companies (like Shandong Huawei) or consulting firms like Alfa- Angel. Secondly, China refrains from participating in military operations in the territories of other countries and therefore simply does not need unofficial armed structures like American Blackwater. Third, in humanitarian and peacekeeping operations, Beijing always seeks to demonstrate a positive image of its security forces. The most striking example is the landing of an amphibious assault force in Yemen to rescue foreign, mainly Pakistani citizens in March last year. 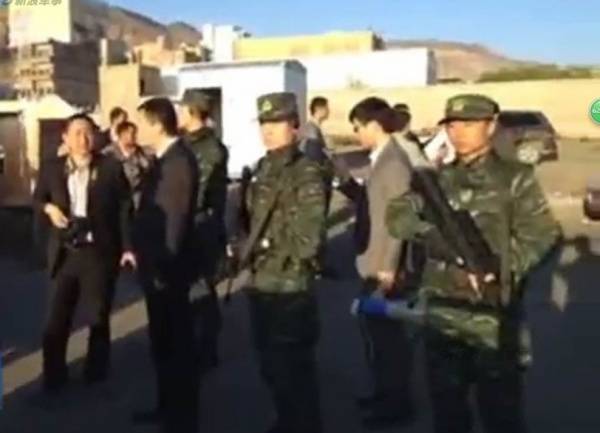 China then openly used its official armed forces. The situation along the Somali coast is developing in a similar way. Instead of using guards from PMCs, China equipped a naval base in Djibouti and sent its fleet to protect the shipping. Well, besides that, two years ago, Western media expressed fears, like those that "Chinese PMCs would take over the world." However, it is now clear that their efforts are not enough even to provide 100% of Chinese citizens abroad: for example, last year militants from ISIL banned in Russia killed Peking Fan Jinghui, and a few weeks ago in South Africa were abducted and released only after negotiations and paying ransom. 11 Chinese citizens. Apparently, the role of armed security units will increase after the increase in the foreign activity of China, but this process is still developing quite slowly.
Ctrl Enter
Noticed oshЫbku Highlight text and press. Ctrl + Enter
We are
Once again on the PMCs: let's talk about the nuances“PMCs are a very effective instrument of influence”
Military Reviewin Yandex News
Military Reviewin Google News
12 comments
Information
Dear reader, to leave comments on the publication, you must sign in.