19 May 2016
37
The doctor of political sciences, William Engdal, believes that Turkey, being encouraged by Washington, is seeking a resumption of the conflict in Nagorno-Karabakh. However, there are forces that oppose this: a meeting on the North-South transport corridor was recently held in Azerbaijan. The development of trade relations in the heart of Eurasia can damage the dominant position of the West. That is why Washington’s allies are trying to renew the Karabakh conflict. 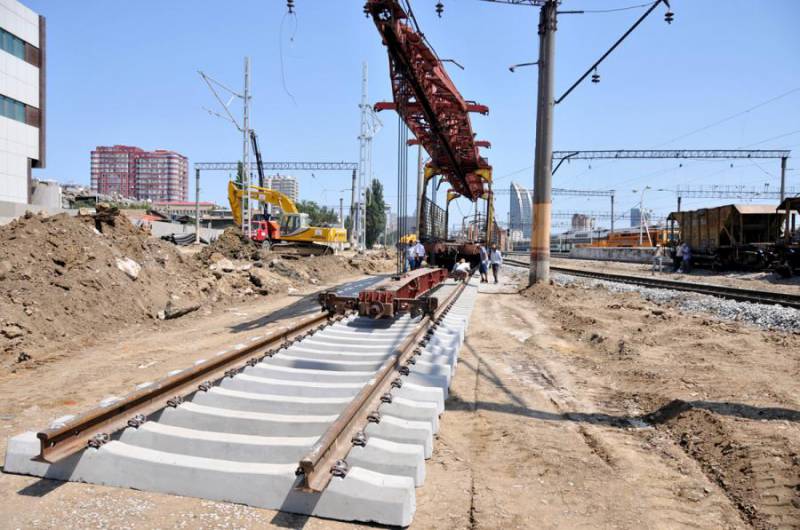 The article by U. Engdahl (F. William Engdahl) appeared in May on the site "New Eastern Ferris".

Due to the recent tensions between Armenia and Azerbaijan and the boiling conflict over Nagorno-Karabakh, the statement by Russian Foreign Minister Sergey Lavrov after talks with his Iranian counterpart went almost unnoticed. But Lavrov said that the development of the implementation of the North-South transport corridor along the Caspian Sea will begin. And it is important here that Azerbaijan also agreed to participate in the project.

If this is true, then this means that Russian diplomacy, driven by the desire to develop the economic infrastructure, has again outplayed Washington, who wants to wage wars all over the world to preserve the status of the United States as a superpower.

7 on April, at a meeting in the Azerbaijani capital of Baku, several hours after the country's withdrawal from the full-scale military conflict in Nagorno-Karabakh, “provoked by Erdogan, a desperate Turkish president,” Sergei Lavrov told reporters that Russia, Iran and Azerbaijan agreed to start negotiations on the implementation of the transport corridor "North South". This statement was attended by Iranian Foreign Minister Javad Zarif and Azerbaijani Foreign Minister Elmar Mammadyarov.

Sergey Lavrov noted that there was a discussion of issues related to the material side of cooperation. “We agreed that our relevant departments will begin to detail the practical aspects of the implementation of the North-South transport corridor project along the western coast of the Caspian Sea,” the minister said. The implementation, he said, implies "work with the participation of ministries of transport, which must work out the technical and financial parameters of the project."

The agreement of Russia, Iran and Azerbaijan, Mr. Engdahl calls the "golden triangle". The initiative is a huge step towards the creation of a large economic space in Eurasia, a “Eurasian heartland”. This space, about the appearance of which warned the British godfather of geopolitics Sir Halford Mackinder, said that it would become a serious threat to the continuation of the hegemony of the British Empire (later the heiress of the United States).

The modern North-South transport corridor, whose project is known since the negotiations in 2002, will eventually link India, Iran and Azerbaijan with the countries and markets of the Eurasian Economic Union, which include Armenia, Russia, Kazakhstan and Kyrgyzstan, and Belarus.

The transport corridor will change the economic space of Eurasia, the analyst is sure. It will transform the entire economy of Eurasia.

North-South will become a modern sea, rail and road route that will move cargo between India, Iran, Azerbaijan, Russia, Central Asia and, perhaps, if only the EU countries ever "gain a sense and refuse to support the military government Ukraine and from sanctions against Russia ", between the states of the European Union.

The new corridor will connect some of the largest cities in the world, including Mumbai, Moscow, Tehran.

Back in 2014, two test routes were simulated. The first - from Mumbai to Baku through the Iranian port in the strategic Strait of Hormuz. The second is from Mumbai to the Russian port in Astrakhan via Bandar Abbas, Tehran and the Caspian Iranian port in Enzeli. The purpose of the study was to identify and eliminate bottlenecks in the project. The study showed that transportation costs for the India-Russia route were reduced by $ 2500 per 15 tons of cargo.

A study conducted by the Federation of Freight Forwarders (India) made it possible to calculate that the project route will be 30% cheaper and 40% shorter than the existing routes (going from Mumbai via the Red Sea and Suez Canal, through the Mediterranean Sea and Gibraltar, through the English Channel to St. Petersburg and Moscow).

US staged a coup in Ukraine in February 2014 years, Engdahl writes further. “Corrupt oligarchs and neo-Nazis” are doing everything to break off relations between Russia and the EU. However, they had to temporarily abandon plans to break up the project of transport corridor "North - South". And now, along with the Chinese initiative “One Belt, One Way”, the large North-South project will create an integral economic, political and military space, which may soon lead to the “Eurasian century” - about the same as it was “ American Century. American world domination, which appeared on the scene after 1944, will be crushed in the same way as the Roman Empire in the fourth century of our era. Today, the East demonstrates the will to build, but the West, the analyst believes, is only capable of destruction.

16 May, we add, the results of the discussion by the heads of the Russian and Iranian railways about the prospects for cooperation in the development of the railway infrastructure of the Caspian Sea region became known. This was reported in the press release of Railways.

“Now the potential of our interaction is far from being used to the full. At the same time, the railways of Russia and Iran have gained experience in the joint implementation of infrastructure projects: in 2012, Russian Railways completed the electrification of the Tabriz-Azarshahr railway line, ” TASS words of the head of Russian Railways Oleg Belozerova.

Has been affected and the theme of the formation of a direct rail link along the western branch of the transport corridor "North - South". According to the project envisages construction of the line Rasht - Astara highway, which will connect the railways of Russia, Azerbaijan and Iran. This will speed up the delivery of goods between the countries of Europe, the Persian Gulf and South Asia.

Following the meeting, the sides signed a protocol on the main directions of further cooperation between Russian Railways and the Iranian Railways. It is indicated that the parties will continue to cooperate in the implementation of joint projects, strengthening cooperation and attracting additional freight traffic to the North-South transport corridor.