At every corner Russian soldiers

19 May 2016
71
In the US, top military officials constantly claim that the actions of Vladimir Putin cause them concern and even alarm. However, the “alarming” statements of the Pentagon people meet with persistent opposition: the number of dissenters in the United States is accusing the military of exaggerating the “threats” and the obvious desire to bite off the budget pie more than can be swallowed. 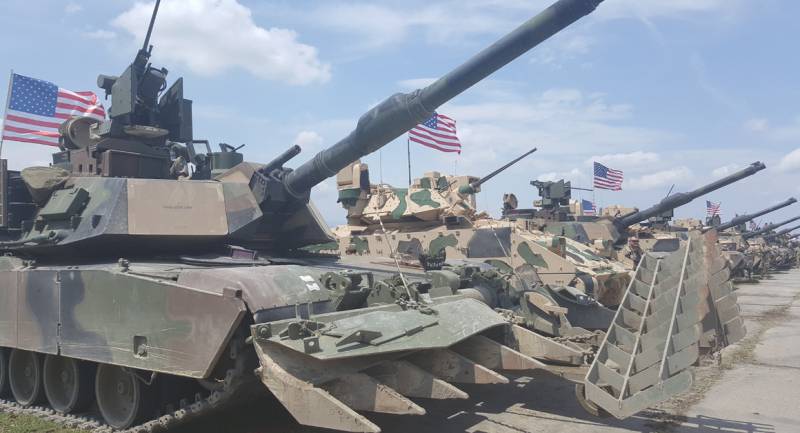 On this subject, Mark Perry (Mark Perry) in the journal "Politico".

As the publicist recalls, on April 5, at a hearing in the Senate Subcommittee on Armed Forces, a number of military commanders issued a warning about the future of US forces. Simply put, the military demanded more money for defense. Like, if the military budget does not increase, then in the coming war, the United States "will lag behind both in range and in firepower." It was also about the war with the Russians.

As these military ranks reported, the “Putin army” has already surpassed the American army in the combat potential of weapons systems. If we bear in mind also the reduction in the number of American ground forces, in the future the army "will be too small" and will no longer be able to "ensure national security."

A similar assessment was given by four ground forces officers. Among them is Lieutenant-General G. R. Mac-Master (the author calls him an “intellectual”: “... Lt. Gen. HR McMaster, his service's leading intellectual”).

Not only these officers express the view that reductions in the military budget may reduce the combat readiness of the army.

However, they have opponents. One senior Pentagon officer reported with irony that other "guys" were trying to convince the public that the Russians were "three meters tall." The same officer said that the army simply "needs a goal" and "needs a good budget piece." Therefore, other speakers paint a crazy picture: Russians land in the American rear and right there on both flanks.

There was a lot of noise, but there were also critics of this “sensation.” Some influential representatives of the military community (retirees), including the officers of the ground forces, were outraged and even scoffed at these “swarms” and “effective tanks”. And they said: they say, where are these news were before?

The author believes that today there is an army "civil strife" associated with the reaction of military circles to a reduction in the defense budget. The ground forces are now trying to modernize the combat arsenal, and to increase the number of personnel. Why all of a sudden? It turns out that the cause of everything ... Russia.

To such nonsense, other military men, whose number is growing, say that the proposed plans should be considered conservative and stagnant. The initiators of these strange plans, apparently, did not learn the lessons of Iraq and Afghanistan. In addition, these people inflate "threats" from abroad. And their goal is simple: grab a piece of fatter from the defense budget.

After all, American forces are already much stronger than Russian ones. The United States today spends seven times more on defense than the Russian Federation ($ 598 billion versus $ 84 billion). Twice as many active personnel are serving in the United States (1,4 million people compared to 766 thousand people). The picture on helicopters: the United States has almost 6 times more (6000 against 1200 in Russia). For fighters: America has three times as many (2300 against 751), and in total aviation Americans ahead of Russians - four times the advantage!

Finally, there are only one Russian ten aircraft carriers.

Mark Perry answered questions from retired Air Force Lt. Gen. David Deputla. Now this person is headed by the Mitchell Institute for Aerospace Research. According to him, stop waving the “bloody red shirt” already. It is necessary to set tasks for the protection of national security, and not to "defend narrow army interests."

Curious is the remark of one senior commander of the Air Force: "Ground forces love to pretend that they are alone in the American wars."

Supporters of the “Russian military threat” have a well-known “instigator” in the person of Air Force General Philip Breedlove. Earlier, this general commanded NATO forces in Europe; he was replaced by General Curtis Scaparotti, distinguished by greater restraint. Nevertheless, Bridllav’s belligerent speeches are of great concern to the European allies of the United States. In early March, 2016 Mr. Bridlove told reporters that the Russians had “raised the stakes” in Ukraine: they say, Putin concentrated there “over a thousand combat vehicles, troops, modern air defense units and artillery divisions”.

One senior civilian adviser from the Pentagon (name not mentioned) noted with humor that the statements of Breedlove have a significant drawback: they (“damn it”) do not correspond to reality.

Supporters of the theses on the "Russian threat" are already doing something. Mac-Master insists that the strengthening of the Russian military forces requires the US to send additional troops to Europe and increase the corresponding expenses in the ground forces budget. And at the end of March, the Pentagon 2016 announced that it was ready to send an additional brigade group to Europe. All this is associated with a certain "aggression" of the Russians.

But here are the opponents. Again, these are retirees. Retired Lieutenant Colonel Daniel Davis hardly believes that these measures will intimidate the Russians. According to him, Putin will not be afraid of the brigade group. Yes, and no one will be scared, says the lieutenant colonel. Moreover, such actions would only play into the hands of Putin: after all, this hostile act would give him a reason to increase military spending and bring him closer to the people.

Critics say that Mac-Master is moving away from the real problem with the methods of warfare. There is an opinion that land forces demand “more soldiers” all the time, but “you need to fight not by number, but by skill”. If the troops simply “get bigger”, this does not mean that they are “doing better”.

And the point of view of MacMaster is no longer integral. Even the chief of staff of the ground forces, Mark Milli (by no means a friend of Russia), doubts the correctness of this “intellectual”. He believes that the notorious "backlog" of the United States "in range and firepower" is some kind of "nonsense."

According to one interlocutor from the Pentagon, with whom Mark Perry spoke, many of the military in the ground forces feel "uncomfortable" because of the statements of the MacMaster. Millie mentioned in a recent performance at the Army Military College even hinted that the problem of the army is not the number of soldiers, but that they are not where they are needed.

The debate on the US military "lag" from Russia, of course, will not end. All sorts of statements about the weakness of the American army - this is a natural "political fodder", which politicians throw up to the public during the election season. As a result, terrorists and Russian soldiers see voters "at every corner".

It should be added that the Republican and the Democrats effectively use the Russian theme in the election season. Every potential candidate is almost ready to "wipe his nose" to Putin or, at least, to "talk" with Putin. The topic of the fictional “aggressors” is extremely popular before the elections: Trump already undertook to “talk” with Kim Jong-un, saidthat "problems" would not have arisen here.

Therefore, it should not be surprising that a “aggravation” has also occurred in the military. The campaign - it's time to download budget rights.

Observed and commented on Oleg Chuvakin
- especially for topwar.ru
Ctrl Enter
Noticed oshЫbku Highlight text and press. Ctrl + Enter
We are
This is not “Putin’s Russia” - this is “Putin-Russia”The tragedy of the American army ("The Atlantic", USA)
Military Reviewin Yandex News
Military Reviewin Google News
71 comment
Information
Dear reader, to leave comments on the publication, you must sign in.