The aim complex 1PN137 of the plant "Jupiter"

19 May 2016
37
According to Nikolai Klimkin, general director of the optical-mechanical plant JSC Jupiter, located in the city of Valdai, 9 in May as part of the Victory Parade, the latest collimator sights were demonstrated, which are intended for the promising complete set of equipment for the future soldier Ratnik. We can say that this is not about a normal sight, but about a full-fledged aiming complex 1PN137, which includes a sight, a night monocular, a magnifying tube and a laser pointer.


Valdai Optical-Mechanical Plant "Jupiter" was founded in 1967 year as a branch of the Krasnogorsk Mechanical Plant (KMZ), but over time turned into a completely independent enterprise, transformed into 1992 year in a joint-stock company. The main products of "Jupiter" today are night vision devices (monoculars and binoculars), and recently the range of products manufactured at the plant has expanded significantly. Currently, the company manufactures finished products: sighting systems for the needs of the Ministry of Defense of Russia, holographic and collimator sights, thermal imaging equipment, night vision devices, thermal imaging optics from zinc selenium and germanium, as well as micro-optics. It all began with the manufacture of lenses for the popular Soviet camera "Zenith", which was supplied to 65 countries of the world.

In 2015, the company completed work on the creation of a day-night sighting and observation complex (DNPC), designated 1PN137. Work on it was carried out in the framework of development work on the theme "Warrior-2". The main designer of the sighting system created by “Jupiter” is the laureate of the Prize of the Government of the Russian Federation, MV Chugunov. The structure created by the complex includes a collimator sight 1P87 ( "Valdai 120 PC"), monocular night 1PN138 ( "Valdai MN120"), visual tube 1P90 ( "Valdai ZT410") and a laser designator 1K241. Complement their special devices designed for mounting elements of the sighting complex on weapon fighter and his protective helmet. According to the results of a series of comparative tests of DNPK, the commissioned JSC “Jupiter” was recognized as the best by the commission, and according to the results of state tests, the elements of DNPK and the whole complex were recommended for adoption. 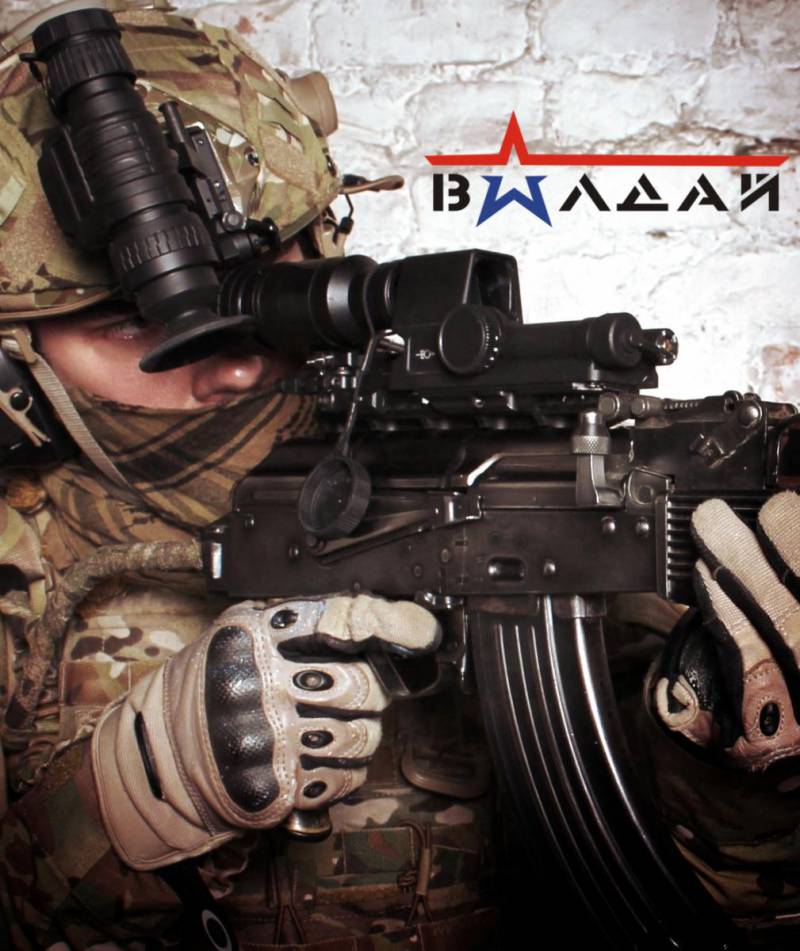 The use of a new collimator sight as part of the complex makes it possible to significantly increase the effectiveness of hitting targets from small arms with a high rate of firing at objects that are moving or appearing for a very short time, and also to conduct aimed fire from weapons in low light or twilight (darkened rooms, night) at application with a night monocular mounted on the gunner’s arms or his protective helmet. At the same time, the collimator sight got the function of adjusting the brightness of the sighting mark, which allows it to quickly change its brightness, providing a fairly clear visibility of the mark against the background of the target, both when observing it in daytime conditions in the direction of the sun, and in natural light conditions at night. And the type of the aiming mark of the sight can be set by any.

The 1P87 reflex sight is single, it has an enlightened prism window of the size 25х25 mm, providing an angular field of view 12 degrees. According to the manufacturer, the light transmission of the device in any conditions is 80%. Compared to high-end optics, this is a rather modest value, which is most likely caused by an obvious desire to get an inexpensive and massive sight at the exit. The sight is powered from a standard 1,5-volt AA battery, which provides continuous operation at the level of 1000 hours at medium brightness. The use of such a battery does not create any supply problems; they can be purchased anywhere in the world. In accordance with the conditions of the Russian climate, the working temperature range of the sight ranges from -40 ° С to + 50 ° С. 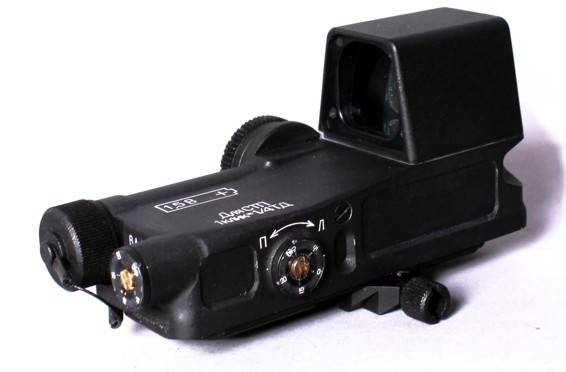 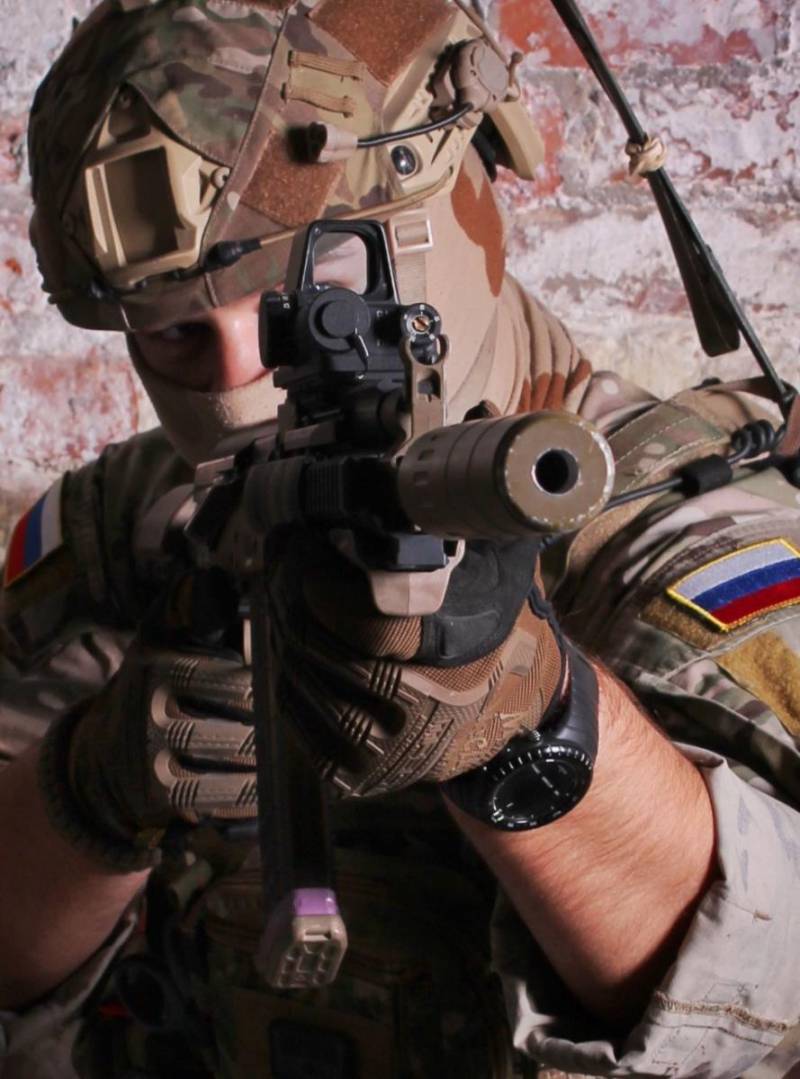 The prismatic scheme of obtaining a collimator beam used in the 1P87 sight allows in practice to realize the best performance of the sight today: an almost unlimited field of view, when the terrain is observed with two eyes and the target and sign remain in the field of view of the shooter. In addition, the shooter can vary the size of the aiming mark at its discretion, the latter has immediately 9 degrees of brightness: 5 daytime and 4 for night time of day. Some complications of the sight design and an obvious desire to make it as reliable and durable as possible led to an increase in the size (133x80x53 mm) and weight (298 grams) of the sight. The 1P87 is mounted on a firearm using the integrated mount for the Picatinny rail.

A feature of the sight is the absence of parallax effect at a distance from 100 to 200 meters, it is also completely devoid of aberration parallax regardless of distance. In addition, he does not have his own unmasking radiation in the direction of the target, as well as glare of external radiation in both night and daytime conditions. The design of the sight is waterproof. It can be immersed in water to a depth of two meters for one hour without losing the performance of the device.

For aiming firing with increased magnification of the magnification directly behind the collimator can be installed telescope 1P90, having 5-fold increase. This aiming tube has an ultra-light construction, made of special aluminum alloy. It is very easy to mount and remove, without changing the position of the middle point of impact. The tube is designed to monitor the terrain and its study, the consideration of remote objects and objects in the daytime. Angular field of view of a device 1P90 - 5 degrees. Overall dimensions - 122х45х46 mm, weight - 180 grams. The telescope retains its performance in the temperature range from -50 ° С to + 50 ° С. The tube remains sealed when immersed in water to a depth of 1 meter. 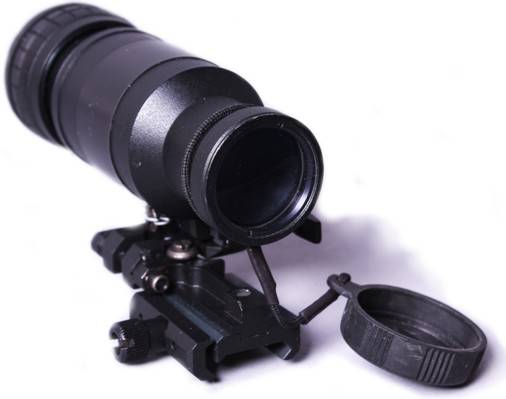 At night, in combination with the 1P87 collimator sight, a night vision monocular, designated 1PN138, can be used. The device is designed to perform covert observation in low light conditions, as well as to conduct aimed fire at night when used in conjunction with a collimator sight, or a laser target designator. This device was developed on the basis of 3-generation EOP (electron-optical converter). He came to replace the night vision goggles used earlier, as it has much greater versatility: it can be fixed not only on the fighter's protective helmet (such as 1B47 or other), mask, but also directly on the weapon itself. At the same time, a night vision monocular with an angular field of view 40 degrees has a built-in IR illumination, which is invisible to the naked eye, which ensures the secrecy of observation.

The monocular is powered by one “AA” type battery on 1,5 volts, the operating time from one cell is 60 hours. The device remains operable at temperatures ranging from -40 ° C to + 50 ° C. The overall dimensions of the monocular are 120x70x52 mm, and its weight is 350 grams. The ultra-light design of the monocular, which is made of a special composite high-strength material, ensures its integrity when immersed in water to a depth of one meter. At the same time, the device can be operated with one hand, including with a glove. 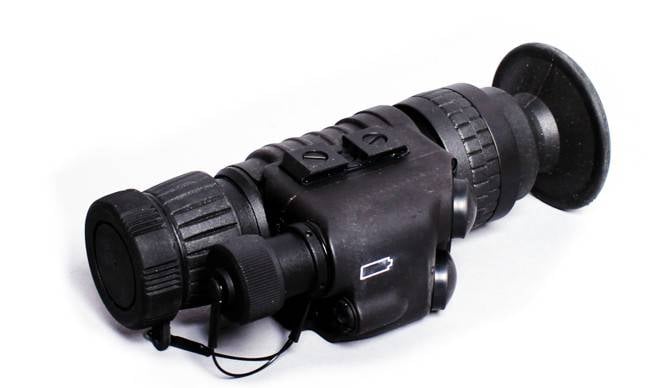 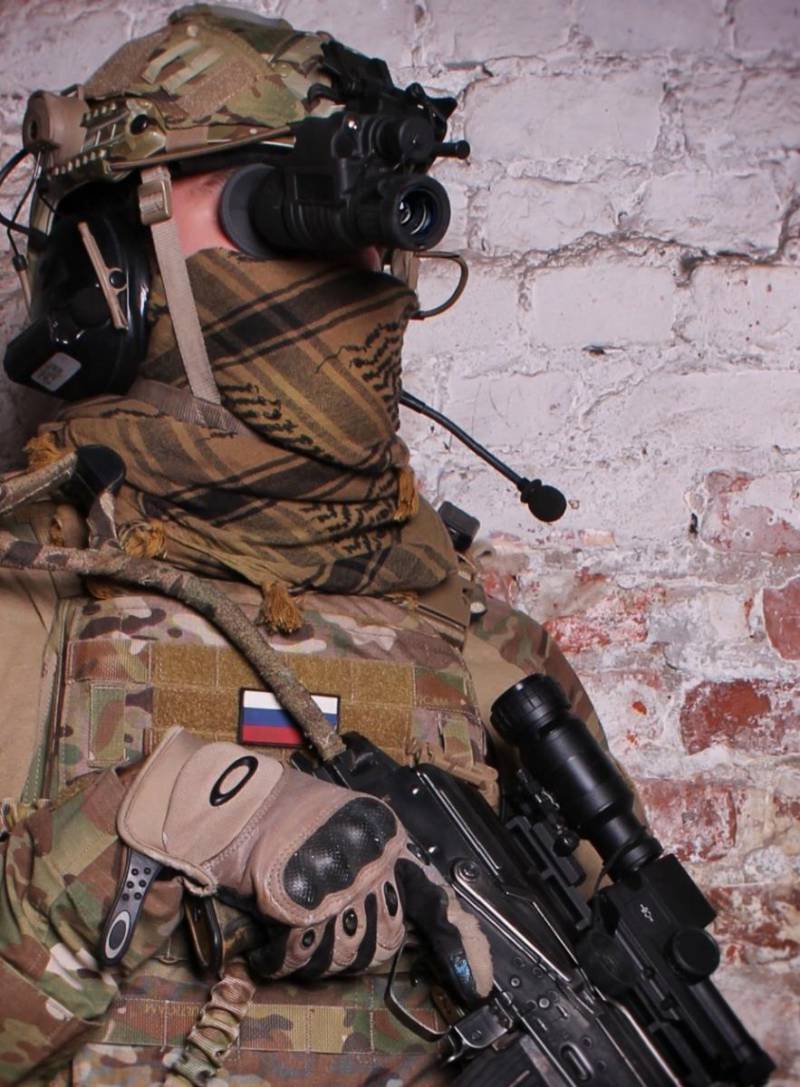 It should be noted that the sighting system 1PN137 as a whole reflects all modern approaches to the tactical and technical requirements and the high technological level of their practical implementation. After passing full-fledged military operation, it will be possible to identify the bottlenecks and shortcomings of the complex. The information obtained will form the basis of work on the next generation DNPC in the framework of the work on the “Warrior-3” theme, and, perhaps, the specialists of Jupiter JSC will create a completely different target complex, which will be built on different principles.