At the end of April, the Japanese X-2 fighter, created using Stealth technologies, first flew into the air. Private by the standards of the modern military aviation the event was nevertheless a milestone in the development of aircraft construction and the country's air force. Japan has joined the elite club of fifth-generation fighter countries.

Japanese X-2 in fact, according to some analysts, "is the answer to the American F-35, the Russian T-50 and the Chinese J-20 and J-31". With the last statement it is possible to argue. Even a superficial glance at the X-2 allows us to conclude that it is closer in design to the classic F-22 Raptor, rather than to the multi-purpose “flying computer” F-35.

X-2 was the product of three phenomena. The first is the insult of the Land of the Rising Sun, the second is its ambitions, and the third is the changing military-political situation in the Far East. The insult was the refusal of the United States to sell F-22 to Japan. However, there was no discrimination in comparison with others: the Raptor is not exported at all. Raising the X-2 into the air, Japan proved that it is capable of creating the fifth-generation fighter itself.

As for ambitions, according to Jeffrey Hornung, a researcher at the Riochi Sasakawa Peace Foundation, “Tokyo is trying to make it clear to the world powers that the Japanese military industry should be taken seriously.” It is also worth noting that, despite the external similarity of the X-2 with the F-22 and T-50, in its weight characteristics it is closer to the F-16 and MiG-29. The nozzle configuration allows us to conclude that the X-2 has the function of a controlled thrust vector, which increases its maneuverability. This feature will allow him to more effectively confront Chinese fighters.

Representatives of Mitsubishi Heavy Industries emphasize that the X-2 is only a prototype with "a glider, engines and other modern systems and equipment that can be used in future fighters." The combat version will receive the designation F-3 and is likely to be adopted no earlier than 2030. But in any case, we can already say that the aviation industry of the Land of the Rising Sun has risen to a new level. Japan is trying to catch up with Russia and the United States. And from a military-political point of view, the fighter clearly looks like a signal to China. According to Hornung, in the confrontation between Tokyo and Beijing around the islands in the South China Sea, the creation of the X-2 fighter should make it clear to the Celestial Empire that Japan does not intend to retreat. 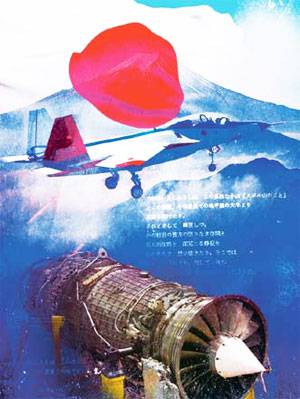 According to the Christian Science Monitor newspaper, in Japan's 2015, Japan’s self-defense forces had 571 to lift their fighters into the air once more to intercept Chinese aircraft that had entered the country’s airspace. Compared to 2014, the number of such incidents increased by 23 percent. Apparently, Japan no longer considers its current destructive forces, consisting of 190 obsolete F-15J, adequate protection against Chinese air invasion.

The main load on the project will fall on three companies. Mitsubishi Heavy Industries will be engaged in the final assembly and quality control. IHI Corporation will be responsible for the production of 17 types of parts and weapons. Mitsubishi Electric Corporation will create radars. The total amount of the contract is 87,7 billion yen (about 914 million dollars).

By the way, the Americans invited these companies to refine their F-35, with which they had many problems - in particular, with navigation equipment and software. Considering the authority and weight of the world aircraft industry of these Japanese corporations, it can be assumed that the Japanese will eventually find something to equip their X-2, and participation in the American project will benefit them.

According to Russian developers, it’s premature to talk about the Japanese fighter of the 5 generation: it is half the battle to design a prototype, for a full-fledged aircraft you need missiles, radar stations, engines, and aviation materials.