The opinion that aircraft carriers are not needed by our Navy is quite common. Someone says the opposite, but emphasizes: heavy aircraft carrier cruiser (TAKR) "Admiral Fleet Soviet Union Kuznetsov "is so ineffective that it is worth withdrawing from the combat strength of the fleet. Such an opinion sometimes makes its way even in naval circles.

There is an obvious need to understand what exactly gives our fleet the presence in its composition of the Kuznetsov TAKR. It is well known: not a single aircraft carrier of the world operates independently of communication with other fleet forces. It is always the core of a large group. Accordingly, an analysis of the significance of an aircraft carrier makes sense only in the context of its influence on the course of combat operations of an appropriate scale. And the criterion of necessity is the increase in the combat effectiveness of the grouping of forces that includes it.

Initially should refer to stories and determine what such ships were intended for in the Soviet Navy. Distinctive features of our TAKR at the time of its creation were that it had a sufficiently powerful attack missile armament in the form of 12 PU for anti-personnel missile complex "Granit" and much more effective than foreign "classmates" means of air defense. The air group 24 of the Su-33 fighter was also specific, which could potentially be equipped for the use of the Moskit anti-ship missiles (successful tests were carried out).

Such views on the mission of the TAKR were based on our concept of armed struggle at sea: surface forces of the enemy, primarily large naval formations, the most important of which were considered carrier-based, should be hit by anti-ship missiles of various classes, among which long-range missiles ranked first in importance. At the same time, everyone clearly understood that the main threat to our strike forces is precisely aviation. For surface ships - deck and tactical, partly strategic, and for submarines - the basic patrol.

The solution to the problem of air defense by saturating the formations of ships with missiles was not fully justified. First, the limited range of the use of missiles, even the most long-range, in fact, excluded the possibility of defeating aviation groups to the point of launching their anti-ship missiles. This meant that the enemy had the opportunity to attack freely and in the most effective way. Secondly, the limited-fire ammunition missile (and MZA) allowed to reflect only a small number of strikes of enemy aircraft. Then he could shoot our ships as unarmed targets. The only salvation was to cover our ship groups with fighter aircraft. It is capable of defeating the attacking groups of the enemy up to the line of launching missiles and disorganize the strike. This meant not only a significant reduction in the number of anti-ship missiles, produced by our ship connection, but also causing losses that prevent subsequent attacks. In addition, the very fact of the presence of fighters forced the enemy to reduce the proportion of strike aircraft in the group, since fighters had to include clearance of airspace and direct accompaniment. However, the cover of surface forces by coast-based aircraft was and remains possible only at a distance of 150 – 200 kilometers.

There is one more problem - our long-range and anti-submarine aviation does not have effective self-defense weapons, and the EW systems only reduce the effectiveness of rocket attacks without preventing them. The only way to prevent heavy casualties is escorting our heavy vehicles and covering their combat use areas with fighters. When using coast-based fighters, this is possible only at a distance of up to 350 kilometers, which is completely inadequate for operations in the far sea zone.

Thus, by the end of the 60-x it became clear: without air cover by ship-based fighters, our ocean fleet is tied to the coast. To solve the problem, it was decided to create exactly the "anti-aircraft" aircraft carrier, which was the project 1143.5 - TAKR "Kuznetsov".

Today the situation has changed somewhat. There is evidence that the Granit complex from Kuznetsova was dismantled. Su-33 in its air group are replaced with MiG-29K / KUB with the ability to strike with anti-ship missiles and precision-guided munitions at sea and land targets. However, the overall purpose and role of our aircraft carrier in the structure of the Navy remain unchanged. In this context, its possible contribution to the solution of combat missions at sea should be evaluated.

"Kuznetsov" is part of the Northern Fleet. With the outbreak of hostilities, it is most likely that TAKR will be incorporated into a heterogeneous strike formation created to defeat enemy aircraft carrier groups in the northern part of the Norwegian Sea. It is also likely to use it to repel the enemy's VNO with operational submission for this period of its air group to a maritime formation or VKS merger. “Kuznetsov” will be the most important component of the forces and means covering in conjunction with the coastal formation (combination) of the naval forces of the fleet in the Barents and Kara Seas in the general air defense system.

The calculated increase in the combat effectiveness of these groups will allow us to give a reasonable conclusion about the desirability of maintaining the TAKR as part of our Navy.

TAKR did his job

It is advisable to begin the analysis from the most complex form of use of the forces of our Federation Council — the hostilities to defeat the enemy aircraft carrier group. Its composition is well known and analyzed in sufficient detail. These are the Nimitz-class aircraft carrier, three or four missile cruisers (Ticonderoga) and destroyer (Orly Burk), three or four destroyers (Spryens) and frigate, one or two multipurpose nuclear-powered submarines, as well as some 100 air group aircraft, including up to 60 fighter / attack aircraft F / A-18C. The Federation Council can put up against this AUG the shock connection of dissimilar forces as part of two or three nuclear missile submarines (SSGN) of the 949 project, two or three multipurpose nuclear submarines of the 971, 945 project, two missile cruisers - one by one 1144 and 1164, and up to 8 – 10 destroyer-class surface ships (956 project), large anti-submarine ship (1155 project), frigate (22350 project). These forces will be supported by missile-carrying aircraft on a Tu-22М3 with an X-22 resource of one or two regimental sorties. Let us consider the possible course of hostilities with and without participation in our TAKR as part of this compound. 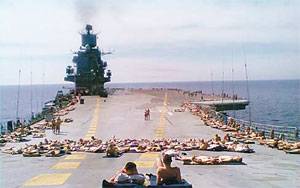 The dynamics of the fighting will include several stages.

During the first, the main task of our connection will be the reflection of air strikes on surface ships and submarines. At this stage, we can expect to counter our connection with forces up to 30 – 34 units of carrier-based aviation and one or two tactical squadrons, up to 6 – 9 BPA aircraft from the airfields of Norway. With the allocation of 16 – 20 aircraft, it is possible to ensure the combat stability of the surface ships of the nucleus (cruisers and aircraft carrier) with a probability around 0,9, and submarines with a probability of no less than 0,9, while without the support of ship-borne aircraft these indicators will be significantly lower - 0,5 – 0,7 and 0,6 –– 0,7 respectively. In this case, most of the ammunition shipboard AIA will be spent.

At the second stage, the main task will be to identify the construction of AUG and ship orders with a strike at the anti-missile barrier (PRB) by the forces of a single SSGN. The issuance of target designation can be carried out from a reconnaissance aircraft, from a satellite or from an NPS reconnaissance-strike group. Placing the details of the calculation in the article is not possible. Therefore, we present the final result. If there is a TAKR in the compound and a detachment to ensure this strike of four to six sorties, the probability of its successful application is up to 0,95, whereas without an aircraft carrier it will not exceed 0,4 – 0,5. The reason is simple - the opposition of the FPA (which will prevent our SSGN from ascending to the communication session for receiving target designation and can destroy it) and the AUG combat air patrol fighters capable of shooting down our reconnaissance aircraft. As a result, in the first case, the probability of PRB neutralization is 0,7 – 0,8, and in the second, 0,3 – 0,4.

The main attack (the third stage) will most likely be delivered by Tu-22М3 with X-22 missiles and one or two SSGNs, ensuring their actions by reconnaissance aircraft. The limited strike time allows you to count on a resource within 16 of aircraft sorties by ship fighters, which will have to neutralize the BWP AUG and the raised groups from the on-duty position on the deck in readiness No. 1 - all 6 – 10 machines, to 4 – 6 coast-based fighters from airfields in Norway 2 – 3 aircraft BPA. If there is a fighter cover, its result can be evaluated in 0,7 – 0,8 for the probability of incapacitating an aircraft carrier with the loss of the capabilities of deck aircraft operations and the sinking of at least three or four escort ships. At the same time, the combat stability of our SSGNs will be at least 0,8 – 0,85, and the losses of missile-carrying aircraft will not exceed two machines (there may not be any at all). In the absence of destructive support for our strike forces, their losses will increase substantially. The combat stability of the SSGN will decrease to 0,5 – 0,55, and the losses of the DA regiment may exceed one third of its composition, having reached half or more under adverse conditions. At the same time, the probability of decommissioning the aircraft carrier will not exceed 0,2 – 0.25.

For the development of success, long-range and short-range anti-ship missiles will be delivered to the main forces of surface ships, possibly with limited involvement of naval aviation. But all this is possible if the main blow is effective. Otherwise, it is quite probable that military operations will be curtailed with the withdrawal of the compound into the bases, which will occur under the fire of deck and tactical aircraft. The main content of this stage is the exchange of missile strikes by surface ships of the Russian compound and the surviving cruisers and destroyers of the United States, followed by the return of our forces to the base. The influence of deck aircraft on the course of warfare will be mainly associated with the reflection of enemy tactical aviation strikes, for which the entire remaining resource can be allocated - from 10 to 16 sorties. This will preserve the combat stability of our surface ships at the 0,8 level. In the absence of air cover, given the complete expenditure of the AIA ammunition, it is unlikely to exceed 0,2 – 0,25.

Thus, in the presence of TAKR, the probability of destroying an enemy aircraft carrier reaches 0,8 with the sinking of up to three to five escort ships from six to eight. At the same time, our connection bears more or less acceptable losses: surface ships - up to three or four units (including a missile cruiser with a relatively low probability), 1 – 2 SSGN and NPS, up to 10 – 12 aircraft, including 1 – 2 long-range aviation. That is, in the presence of TAKR SF can easily cope with AUG. But in the absence of the problem is practically not solved: the probability of withdrawal of the aircraft carrier will not exceed 0,2 – 0,3 plus one or two sunken escort ships. Our losses will be catastrophic: 6 – 8 surface ships, including both rocket cruisers, up to 3 – 4 submarines, 10 – 12 planes YES.

The conclusion is clear: the Kuznetsov TAKR is necessary. Talk about the feasibility of maintaining it in the fleet should be stopped.