19 May 2016
38
And it was like this, when discussing one of the articles here at VO, some readers in the comments suggested that, say, sailors like to believe in omens. Superstitious, they say, they are people. It is impossible to unequivocally say neither yes nor no, but this is what I found in the archive on this subject:


“As you know, in the pre-revolutionary common people in Russia, people used to believe in all kinds of rubbish. We saw the fateful effect of weather on historical events: “It was not so good that it turned purple and circled, and here the eggs went up in price!”, they explained to the female “mothers” that the Mother of God “was offended” and therefore left, and no longer intercedes. Well, let alone the evil influence of black cats crossing the road, or the trouble of spilled salt, you can’t even remember. It was not good to cut a finger, to see a tooth falling out of blood in a dream, to meet a journalist (!) On his way, well, and even then they thought that whatever you call a vessel, it would float. That is precisely why it has become fashionable for us to give ships the names of saints (what if they intercede ?!) and call them the names of famous military leaders and those places where Russian weapon showed his valor. They called the ships in honor of the ruling persons. In particular, in honor of Tsar Alexander III - 13 of the All-Russian Emperor, an armadillo was launched, launched before the deterioration of Russian-Japanese relations - “Emperor Alexander III (launched on 3 August 1901). Interestingly, his sister-spikes, built on the same project, were the armadillos Prince Suvorov (25 September 1902), Borodino (8 September 1901), Orel (6 July 1902) and Glory (29 August 1903 ), so that the whole series included five modern battleships of that time with the location of all the guns in the towers, both the main and the secondary caliber. 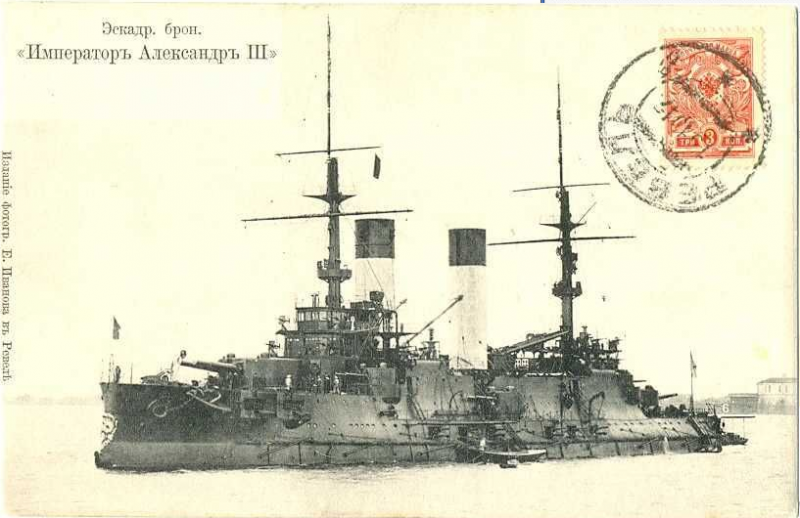 The Russian Niva magazine for 1901 reported that the strengthening of the imperial military fleet it is an urgent need for it to be able to equalize forces with the fleets of other great powers, and therefore should be welcomed in every way. As always, when it came to Russia about money, it was said that there was not enough money, but nevertheless the necessary amount of 80 million rubles was found “for shipbuilding”, and the business began to move forward quickly, and the ships descend annually, and even two at once! So now, they say, an armadillo is preparing to descend into the water after the sovereign Emperor Alexander III, who died in a Bose. This is very good news for everyone.

Then there it was noted that already on July 2 of the following year, 1902, the battleship was ready to be launched. In 12 hours 30 minutes in the presence of their Majesties, as well as generals and admirals in the slipway of the Baltic Plant, the celebration began, and in connection with this he was all decorated with flags and coniferous garlands. The pavilion for the august family, from where she had been watching what was happening, was also most luxuriously cleaned with greenery and flowers. 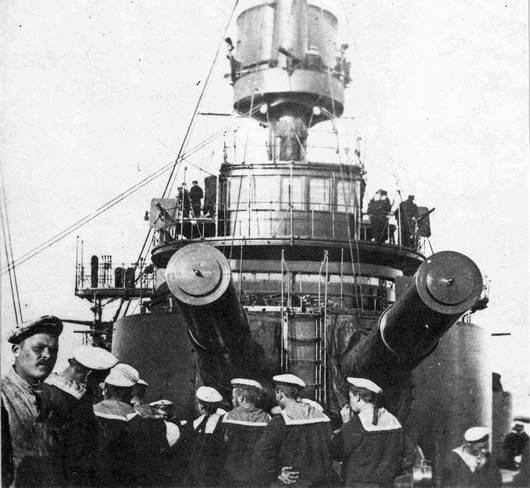 The battleship "Emperor Alexander III": guns of the main caliber.

The magazine reported that this battleship is a “real sea giant” with a bright red underwater part and a dark gray top. The vessel's displacement is about 14 thousand tons; and its travel speed reaches 18 nodes. The number of guns reaches 62, and among them are four main caliber 12 inches each. In general, the journalists painted the ship in as impressive a manner as possible, so, reading the material about it, it became really obvious that the sea power of the state is growing not by days, but literally by the hour. 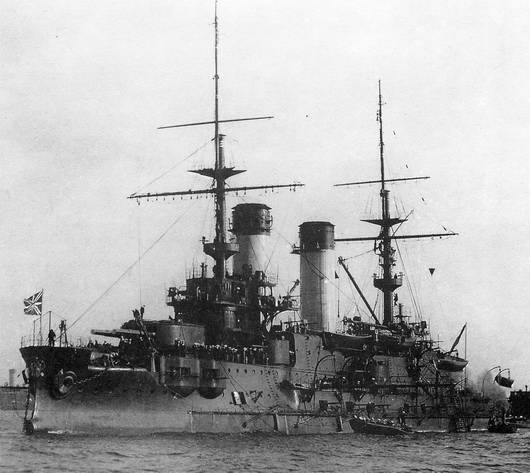 It was not without reason that in textbooks for the cadet corps of that time it was written that Russia is an unusual state: it is not commercial, and not even industrial, but ... military, and fate itself was preparing for it to be a threat to the peoples! Yes, yes, that was how it was written there, and the Cadets should have memorized this maxim! Well and, of course, could not help but please the Russian inhabitants and other reports of the ships of this series - Prince Suvorov of the same type with him - who had not heard of his military glory and victories, Borodino - “the field of Russian glory, where the happy star rolled Napoleon "," Eagle "-" the royal bird "and" Glory "- one name which already speaks for itself. 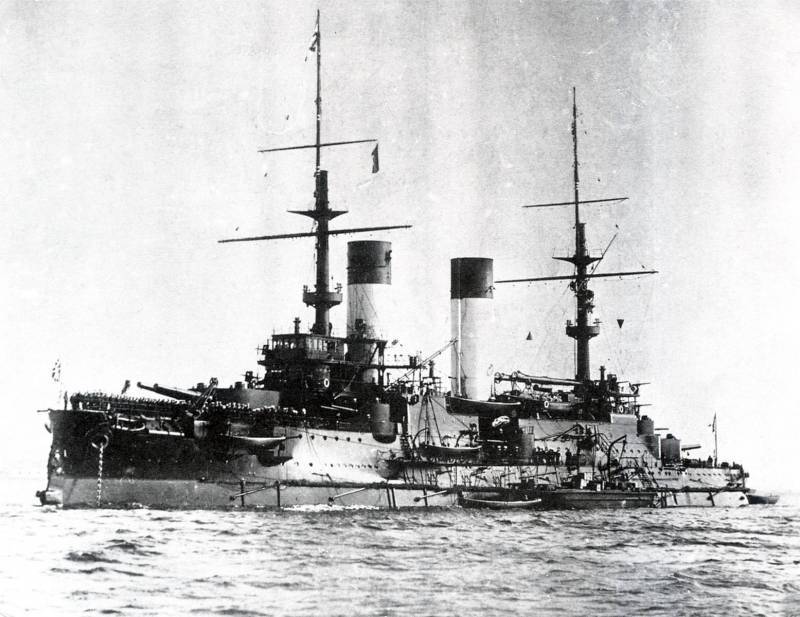 With the singing of the hymn “God Save the Tsar!”: “Strong, Sovereign, Reign in glory, in glory! Reign in fear of enemies, Orthodox Tsar! God save the Tsar! ”The battleship was freed from the chains, and he faltered and began to move slowly along the greased slipway. The crowd rustled, the drums struck, the sailors also sang a hymn on the deck of the descent ship, and national flags were hoisted on all flagpoles: the admiralty, of course, the imperial, the general admiral and various others. The sun played on the gold of the epaulets and diamonds on the dresses of the ladies, and yet Fate had already celebrated this celebration and was preparing to turn it into its direct opposite. 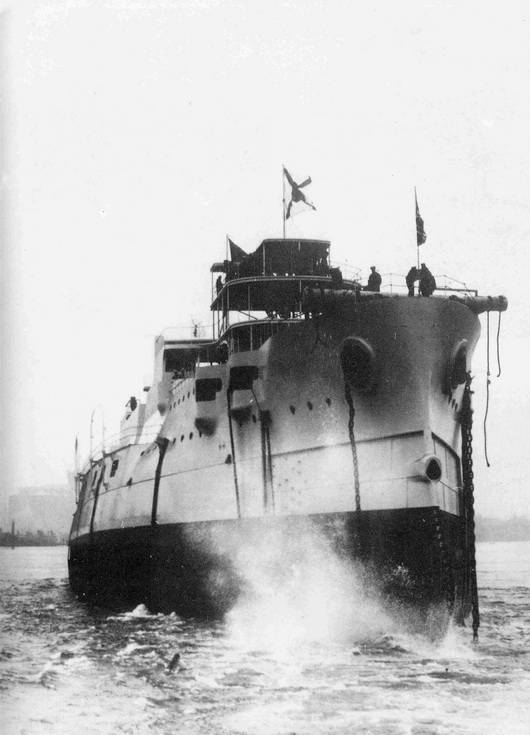 The squadron battleship "Prince Suvorov" at the time of launching, September 12 1902.

In fact, it can be argued, not without reason, that the last emperor of Russia was persecuted by evil fate. To start at least with the death of his father, because of which the evil tongues later said that the young queen “had come for the grave”; then the well-known “Khodynsk”, and now this catastrophe was added to them ... And it was necessary for such a thing to happen that at the most crucial moment of the ship’s launch into the water a strong squall hit the city, it rained and a very strong gusty wind blew .

And he was so strong that he tore off a huge flag on the top of a crane that stood on the pontoon here on the Neva, and threw it along with the flagpole towards people on the embankment! Its length was 2.5 fathoms - that is, about five meters, and the weight is appropriate. And so he struck the heads of many of those who stood there! 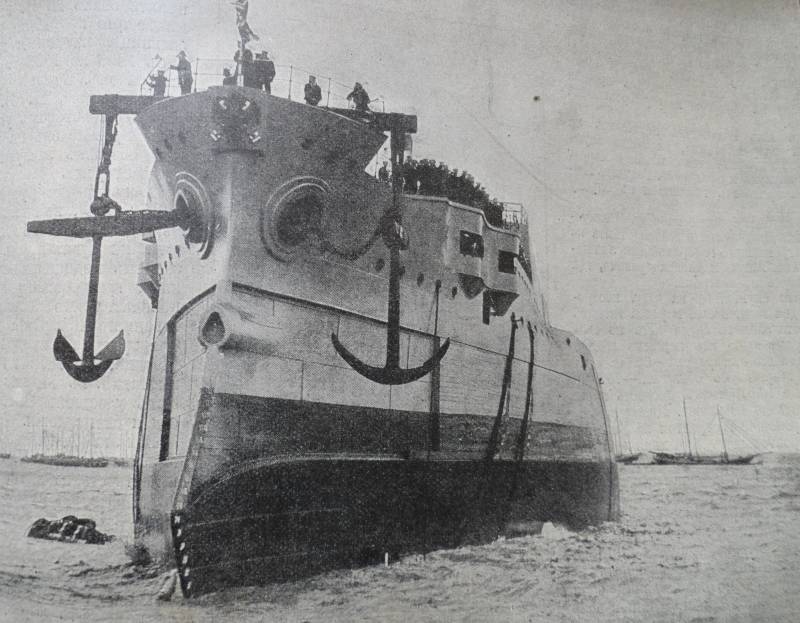 The battleship "Eagle" at the time of launching (photo from the magazine "Niva").

The magazine reported that the gendarme colonel V.P. Pyramids, “painting the flag with their blood,” immediately died, without regaining consciousness. Young pupils of the Emperor Nicholas I Naval Engineering School, who were brought here for the festive ceremony, were also fatally injured. Gustomesov's pupil also broke the skull with a flagpole, and he, like the Colonel Pyramids, died on the spot. Another pupil, Van der Burden, died half an hour later, on his way to the hospital. Other pupils suffered: someone had a concussion, someone had a crack in the skull.

Now imagine what impression made what happened on the elegantly dressed audience on the embankment ?! People silently dispersed, discussing that "bad, they say, this is a sign," and all this is very "not good." 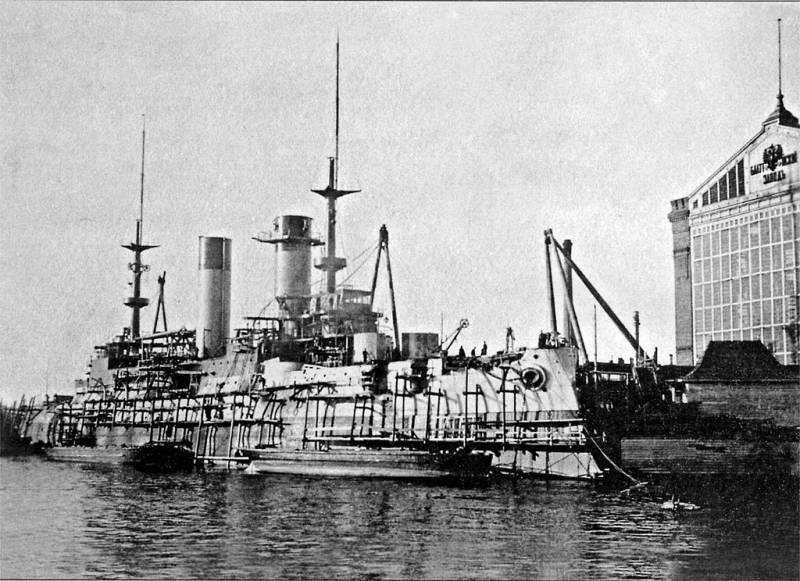 The squadron battleship "Prince Suvorov" at the berth of the Baltic plant, 1903 year.

Buried the victims of the elements of July 24. Young pupils otpeli in the church of the maritime hospital, and was buried in a mass grave at the Semenovskoye cemetery of St. Petersburg. A cross over the grave was also put in common for everyone, and the inscription on it said that those who died during the launch of the battleship "Emperor Alexander III" were buried here. 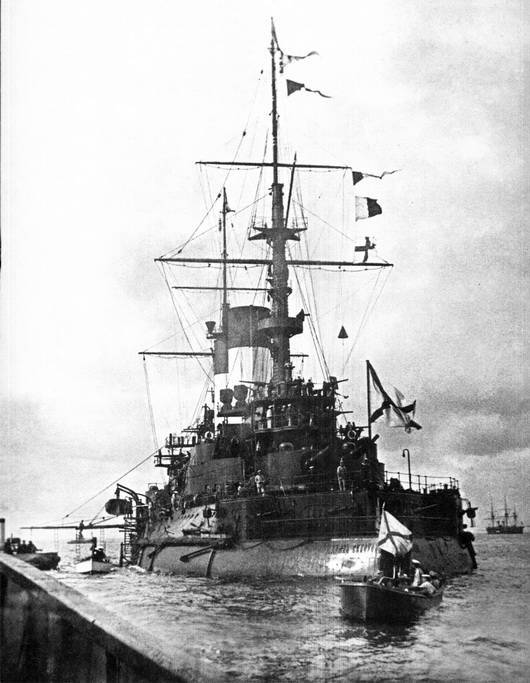 Well, so how can you not believe in omens after that? The sailors themselves believed that with the ships with which something had happened during the launching, in the future something would certainly happen, and it was not that misfortune, but the most actual killing, was shed innocent blood, and moreover filled flag - worse than ever! However, just to think so is one thing, but to serve on a ship, with which all sorts of troubles occur, is quite another! For example, in 1903, the battleship began to draw water from the open-air gun ports of the onboard battery 75-mm guns during running trials, and only by shifting the rudder and stopping the ship was saved from turning upside down by the keel!

The question that the sailors and officers of the ships of this whole series began to ask themselves afterwards in those years could be only one: will the spread of the influence of this sign be limited to only one ship, or will the curse fall on the whole series, because the ships of the same type, similar like twins, and "Alexander" in the construction was the head ... And how about "Suvorov" ... Will the strength of his name be enough to "overcome" the evil fate of the thirteenth monarch? However, no one could give an answer to this question then. But many, no doubt, remembered this bad omen of 14 in May 1905, when during the Tsushima battle the battleship "Emperor Alexander III" together with "Borodino", "Prince Suvorov" and "Eagle" engaged in the battle with the Japanese. And all ... suffered and died one after the other. "Prince Suvorov" was the flagship and the first shot at the Japanese ships. However, the name of the famous commander did not help him. Soon he was bombarded with shells, a fire broke out on him, after which he soon died, and after him all the other ships of this ill-fated series. Only the battleship Eagle, which surrendered to the Japanese, and Glory, which remained in the Baltic, were saved. Of the entire crew of the battleship in which there were 867 officers and lower ranks, only one fireman Simon Kobets 1870, born in the Japanese ship, survived. With the "Borodino" also escaped only sailor Simon Yushchyn, who under the water in the dungeon was not taken aback, groped for the gun port, opened it, and managed to emerge to the surface, where he was picked up. But from the “Prince Suvorov” they rescued both the wounded admiral and the staff members, but almost the entire crew of the flagship - 38 officers and most of the sailors on it died! 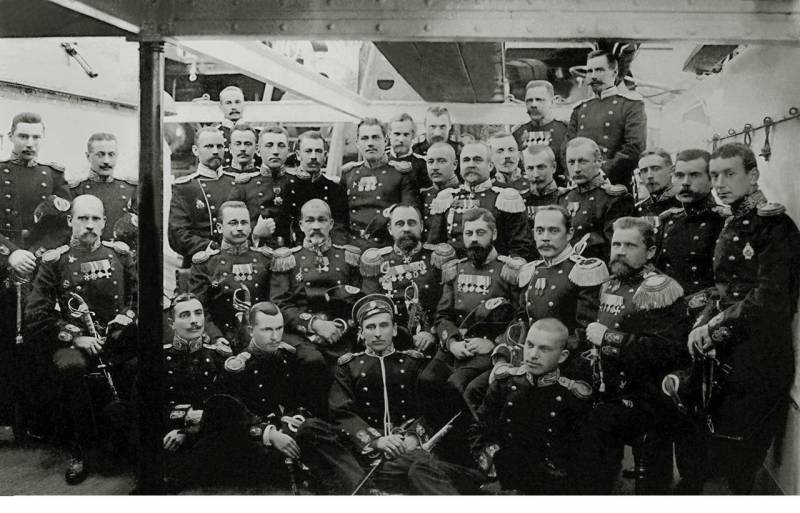 The officers of the battleship "Prince Suvorov". They gave for their country the most expensive ...

Of course, materialistically speaking, the cause of the death of all these ships was some objective circumstances. But who wants to believe in the opposite, will always be able to say that the misfortune of “Emperor Alexander III” was “written with a blessing”. But the name of "Suvorov" ... Well, Suvorov, although he was a glorified commander, but he was not the king, so his "happy" name could not change an unhappy fate! ”