How "Frankenstein" is created from the educational system

18 May 2016
102
Earlier this month, it became known that Russia increased the presence of its universities in the so-called TOP-100 world ranking "THE: World Reputation Ranking 2016". In addition to the remaining in the hundred best universities in the world according to the specialists responsible for the formation of this rating, Moscow State University and St. Petersburg State University, in the TOP-100 Moscow Institute of Physics and Technology (MIPT). Moscow State University has a 30 place, St. Petersburg has a group of universities from 81 to 90, and Moscow Physical and Technical Institute from 91 to 100.


The rating is based on a survey of approximately 10 thousand scientists from 133 countries of the world.

A statement from the editor-in-chief of the rating THE Phil Beyty Press Service of the Ministry of Education and Science of the Russian Federation:
As we said, when the previous rating was published, Russia would have to continue to work hard to withstand competition among global players, such as China, which also invests in higher education. In general, the presence of the third participant in the rating from Russia - MIPT - is excellent. news. Last year, only two Russian universities were present in the ranking, and before that, only one for many years. Reputation is the global currency of higher education. It may be subjective and not always fair, but it is important. This is the TOP-100 of the most prestigious universities - a small elite group, comprising only half a percent of the total number of world universities.

It would seem that after the increase in the number of Russian universities that fell in the TOP-100 of the above-mentioned rating, there is a reason to throw caps into the air, rejoicing in the growth of the quality of national education. And indeed - just yesterday, the very same 10 of thousands of scientists from 133 countries of the world, Russian universities, you understand, did not notice the emphasis, and now (wonderfully!) They allowed three of them to enter the “world's best one” at once. But only a person who is very far from the educational environment can afford to be happy about the "growth of quality" of national education. Indeed, it is one thing when some foreign scholars assign rating points to Russian universities, and another thing when dealing with the educational system every day and see for yourself what happened with this system in recent years.

So it happened, but this is another material on our informational and analytical portal, in which the problems of the educational environment are discussed, which is one of those environments for which at least some intelligible development program is missing. From television screens, officials from the Ministry of Education and Science almost daily talk about the “outstanding” results of the USE, that educational standards of the “new” generation are adopted in educational institutions (they are accepted, I must say, several times faster than, for example, airplanes of new generations ...), the constant increase in the level of mastering the so-called competencies of students and students. In general, you look from the outside - everything is almost perfect, but it is only what is called to dig ... it appears that the hair (if there is) on end ...

One of the “fashionable” trends in the education system is connected with the obvious desire of the Ministry of Education and Science to comply with the spirit of the times and to carry out large-scale optimization (well, this is what we usually call the process of “living off” people out of the system (in this case, educational)). Dismissing or reducing as if moveton, and therefore a new (amazing) system was born. It manifests itself most vividly in vocational education institutions (technical schools, colleges, lyceums) and rural schools.

Quite recently (on the basis of the next document of the new generation with old problems) the system of initial vocational training officially ceased to exist in Russia. In other words, numerous vocational schools and vocational schools disappeared, the abbreviations of which for modern youth (seeking to grab two or three diplomas of a manager, lawyer or specialist in God forgive me, consulting, then to sell bags or beer) sounded like something offensive. Like, whoever goes to these, excuse me, pigs, when even a person, instead of a mathematical record “X in a square” that draws a letter and draws a box around it, is able to get a diploma about the “tower”. And indeed, this diploma is obtained ...

So, vocational schools and vocational schools, designed to train those same workers in whom (the government already buzzed everything) our Russia needs, for the most part they ceased to exist and merged structurally eroded parts into technical schools, and even higher educational institutions ). According to the logic of the Ministry of Education, “enlarged” vocational schools with several educational levels appeared.
Here are just places these are sometimes so enlarged that in one such institution can be taught in completely incompatible specialties - from the welder to a specialist in tourism management. Although such a diverse profile is not the strangest. If there are specialists, then, as they say, for God's sake - even if the kids are learning.

Here are just the main snag in the experts. After all, the Ministry of Education and Science, embarking on this kind of enlargement, as already noted, clearly hoped to optimize the staff. Several educational institutions have merged - the recruitment plan has declined - and this means that the number of representatives of the engineering and teaching staff should decline. How did you decide to implement this procedure? But how: if Ivan Ivanovich, a hypothetical master of industrial training (a person teaching young children of the working profession) worked as a master technician, teaching, say, welding, grinding or turning on a lathe, years 15-20, then the Ministry of Education and Science now suddenly asks the question: Van Vanych, do you have any pedagogical education? After all, it is well, oh, how it is necessary for you to teach young children of welding, grinding or turning.

Van Vanych throws up his hands, because he really does not have pedagogical education, because earlier he could not have imagined that in order to teach children how to use a welding machine, he would need to finish a pedagogical university ... I thought skill, experience, everything, worked at the factory, he knows a lot about communicating with the guys ... Only now the main educational department of the country says to Ivan Ivanovich: stick your skills and experience far away, and the employer "take out and put!" a diploma of pedagogy, otherwise you will not correspond to the position held. Get the “crust” wherever you want! You can buy at least in the transition ... They said “it is necessary!”, It means that it is necessary ... 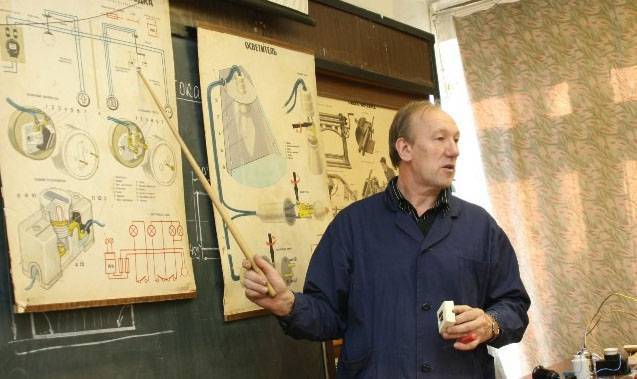 And the fact that 3-4 was left for this average Van Wanych before retirement, and that he managed to prepare hundreds of qualified welders and machine-tool operators who work successfully at the largest industrial enterprises of Russia for his work in educating the workforce, this is the Ministry of Education and employers who have to dance under the tune of the "main leadership", do not care. I do not care that together with Van Vanych, the specialists with pedagogy, who were involved in the necessary educational processes, worked hand in hand, while Van Vanych, on duty, simply taught students to manage the metal and electrodes.

And most of these Van Vanyche raises his hand higher, spits away and says: “Yes, burn it with a blue flame. I’ll rather pick in my garage - beaten cars will go through - and then it will be. " And at this moment a “qualified” specialist, who has a diploma (certificate, coursework about pedagogical education), replaces the person who gave decades to the profession, and whose name is on dozens of letters and hundreds of lists of the best specialists in the city and region but she has no idea what the training of good hands is. As a result: a) the connection of generations is lost in the educational environment, b) the attempt to “optimize” leads to the loss of specialists with a capital letter, c) the level of absurdity increases, when people who are far from the essence of the process of training the workers required by the economy take places .

But in the reports of the Ministry of Education and Science everything is great - they all correspond to the positions they hold - everyone has the necessary diplomas, which today, if desired, can be purchased at any semi-legal online store, it is still not a single database of university graduates.

The very essence of the educational system is being thrown out - the interested work of responsible professionals for whom to teach a student or a student is not the same thing as filling a hundred papers about how he is going to do this, and then another hundred reports about how it did it ... The educational system acquires the features of some kind of "Frankenstein" assembled from fragments left over from the decayed Soviet model of education and dressed in western clothes under the sauce of total confusion with what result in general (to ohm paper) expects to receive the Ministry of Education and Science in the end.

Ctrl Enter
Noticed oshЫbku Highlight text and press. Ctrl + Enter
We are
World MIC - who is in the topSIPRI published "Top 100" weapon manufacturers in 2013
Military Reviewin Yandex News
Military Reviewin Google News
102 comments
Information
Dear reader, to leave comments on the publication, you must sign in.