The National Interest: Russian videoconferencing is now not far behind the West in a key direction

18 May 2016
38
Despite a significant reduction in the intensity of combat work, the operation of the Air and Space Forces of Russia in Syria continues and continues to be of great interest to domestic and foreign specialists. In this regard, in the foreign press there are more and more new materials, the authors of which reveal the various features of the current modernization of the Russian armed forces.


Among other areas of development, the renewal of electronic systems for combat is of great interest. aviation. This is the subject of Dave Majumdar’s article “The Russian Air Force Was Always Behind the West in One Key Area (Until Now)” (“The Russian Air Force has always lagged behind the West in one key direction (until recently)”), published on May 11 The National Interest. As is clear from the title, the author of the article believes that Russian specialists managed to sharply reduce the previously existing backlog in one of the most important areas.

At the beginning of his article, an American journalist makes conclusions about the current Russian operation in Syria. The latest events, in his opinion, clearly show that the “previously dilapidated” military aircraft recovered after the fall of the nineties, associated with the collapse of the Soviet Union. New high-precision weapons and the latest combat aircraft, such as the Su-30CM, Su-34 and Su-35С, were demonstrated, but it is clear that Russia still lacks some capabilities. 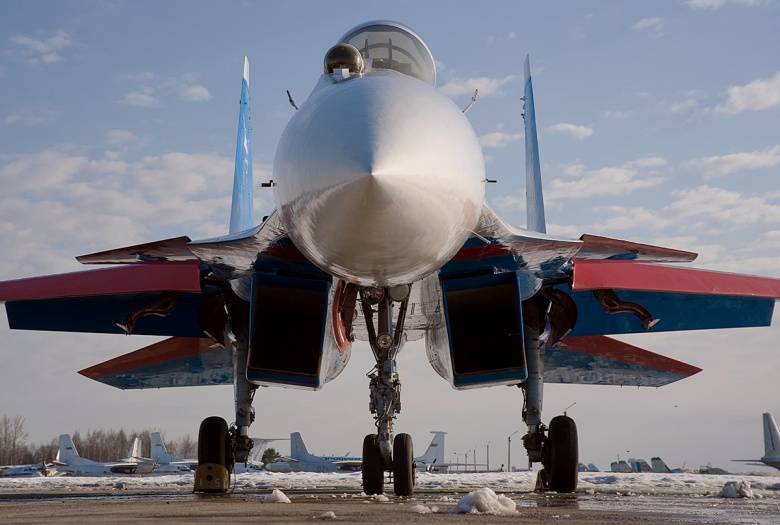 One of these problems previously was the lack of modern target designation and targeting systems, similar to the American suspended sighting containers Northrop Grumman Litening G4 or Lockheed Martin Sniper. Nevertheless, it seems that Russia intends to get rid of this lag. The creation of new tools that will help catch up with progress in foreign countries is being carried out by Rostec and Precision Instrument Engineering Systems.

According to the latest data of the Russian press, by the end of the year, the Aerospace Forces should begin testing the latest suspended sighting container with special equipment. According to Izvestia, the representatives of the military department held all the necessary consultations with defense industry experts, and also agreed on the timing of the work. Testing for new means of combat aviation will begin this year.

According to D. Majumdar, the new outboard container for Russian aircraft can be used by various types of equipment. Its carriers can become Su-30CM, Su-35С, Su-34 and MiG-35 aircraft. In terms of technical appearance, this system will differ little from foreign analogues. The equipment of the satellite navigation equipment will be included in the composition of the container, and in addition, optical-electronic and laser systems will be used to search for targets, target designation and weapon guidance. It is also possible to use video transmission and reception systems similar to those used in the United States. At the same time, the author notes that accurate data on various features of the new Russian systems are not yet available.

D. Majumdar believes that Russian specialists have accelerated work on the new project after the first analyzes of the combat experience of the Syrian operation. The study of the combat work of aviation could show the importance of using additional equipment for the use of weapons. In this case, the author recalls the accusations of the Russian military aviation in the low accuracy of the strikes. In his opinion, such results of the combat operation of aircraft can be associated precisely with the absence of outboard sighting containers, which are responsible for the use of high-precision weapons.

Until recently, the Russian industry did not produce and did not even develop containers with special equipment. However, realizing the need for such systems, at the beginning of the two thousand years, Moscow negotiated the purchase or even licensed production of the French systems Thales Damocles. The contract for the supply of finished equipment was not signed, and negotiations to buy a license did not yield the expected results. At the same time, despite all the efforts made, the industry was not able to create a similar system with the required characteristics.

Referring to Izvestia, the American journalist reveals a possible reason for the successful completion of the development of a new Russian project. Not so long ago, Russian enterprises managed to master the production of piezoelectric ceramic film with a thickness up to 100 microns. Such a technological breakthrough allows you to create various new systems, including suspension targeting systems. Films with the required characteristics are produced by SRI "ELPA" (Zelenograd). This organization initially encountered some difficulties, but later was able to establish a full-fledged production of new products.

Thanks to the emergence of new materials, the Precision Instrument Engineering Systems Corporation was given the opportunity to begin developing a new suspension system for combat aircraft. The design of the new container was reportedly completed at the end of last year. Production of the new product should start at the end of the summer of 2016, after which the project will be ready for testing. D. Majumdar assumes that the appearance of a container with targeting equipment will allow us to bring the strike capabilities of Russian aircraft to the level of existing fourth-generation American fighters such as the F-15, F-16 or F / A-18.

News On the completion of the development of the first domestic outboard sighting container for combat aircraft, the 6 of May appeared. An unnamed representative of the Aerospace Forces spoke to Izvestia about current work and some plans for industry and the military. In addition, it is reported that several domestic organizations are currently engaged in the development of containers, but only one project has approached the testing at the moment.

According to reports, the new sighting containers will be equipped with optical-electronic systems and other equipment necessary to determine the location of the target and calculate the parameters of the use of weapons. It is assumed that the use of such systems will allow existing aircraft to use weapons with greater efficiency. The probability of detecting and correctly identifying targets should increase, and the accuracy of shooting and the overall effectiveness of strikes should also increase.

Perspective outboard sighting containers are intended for installation on airplanes with limited impact capabilities for ground targets. With the help of such equipment, fighters, which are limited in their ability to destroy ground targets, are able to use a wider range of weapons with a greater effectiveness of strikes. Thus, with the aid of outboard equipment, a fighter can become a full-fledged front-line bomber with relatively high characteristics.

It is reported that over the next few months, the Precision Instrument Engineering Systems Corporation should produce a prototype of the new system, after which it will begin testing, including with the use of an aircraft carrier. Successful completion of these and subsequent work will significantly increase the impact potential of domestic front-line aviation. Thus, the title of the article from The National Interest will accurately reflect the current situation: the lag will indeed remain in the past.


The article "Until Russian, The Russian Air Force Was Always Behind the West in One Key Area":
http://nationalinterest.org/blog/the-buzz/the-russian-air-force-was-always-behind-the-west-one-key-16164
News "Izvestia" on the current status of the project:
http://izvestia.ru/news/612356

Ctrl Enter
Noticed oshЫbku Highlight text and press. Ctrl + Enter
We are
ARMY-2016. Cluster VCS. Part of 2. Space is space!Update the Russian Navy. In the gland. Part of 1
Military Reviewin Yandex News
Military Reviewin Google News
38 comments
Information
Dear reader, to leave comments on the publication, you must sign in.