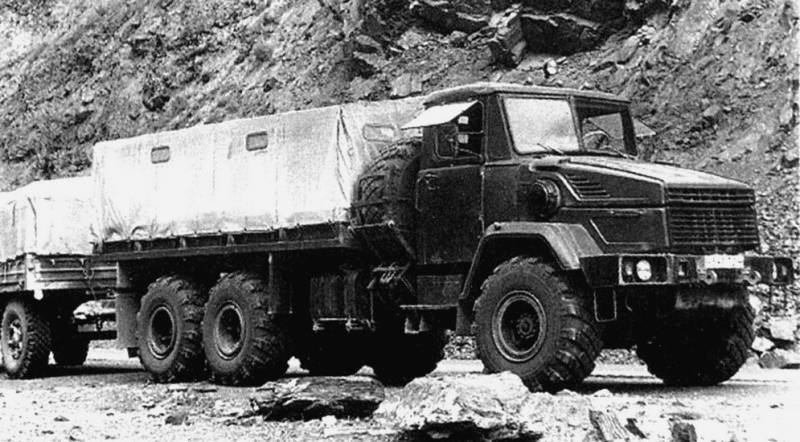 In Soviet times, the Kremenchug Automobile Plant was a small manufacturer of heavy trucks and dump trucks for the common man, but in fact, since its inception, under the orders of the Ministry of Defense, there have been secretly carried out secret development of promising army all-wheel drive trucks, multi-axle active trucks.

The beginning of military developments at KrAZ in 1961 put the decision to organize a secret SKB-2 there for the design of advanced heavy military equipment. The following year, a group of young engineers developed the first samples of three-axle machines with a 240-strong diesel engine YMZ-238. These were the KrAZ-253B eight-ton truck and KrAZ-259B truck tractor for working with an active semi-trailer, on which a cabin from the pre-production truck MAZ-500 was installed. The hydromechanical four-position gearbox and independent torsion suspension, which increased the traction characteristics and stability of the machines, became a revolutionary novelty. In the same year, prototypes were factory tested. 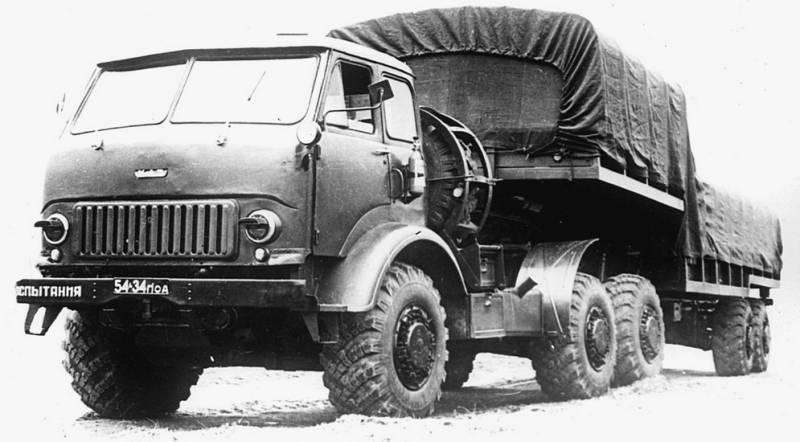 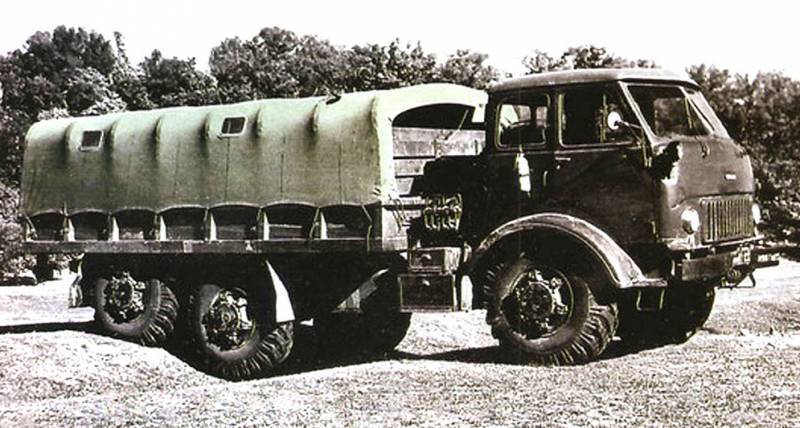 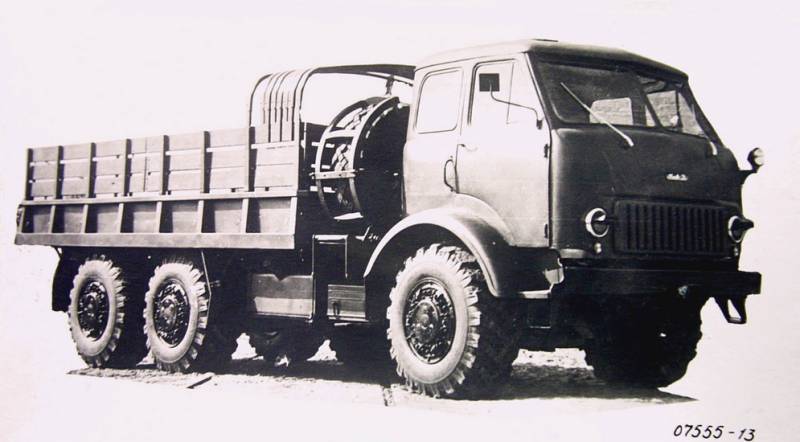 Cars, hastily assembled on the wave of fashion trends, proved to be too complicated, expensive and equally unreliable. Two years later, the plant presented the second series, consisting of a nine-ton truck E253 and a tractor E259 with a semi-trailer E834. They installed an experienced 310-strong diesel engine YMZ-238H with turbocharging and a more reliable eight-speed manual gearbox, independent suspension and tire inflation system. Here, for the first time, its own more spacious cabin appeared, which resembled the GAZ-66 cab. Testing machines were carried out until June 1965, then the modified samples were tested again in the 1967. In general, they satisfied the military, but they turned out, again, very expensive, which was considered synonymous with the futility of the entire project. 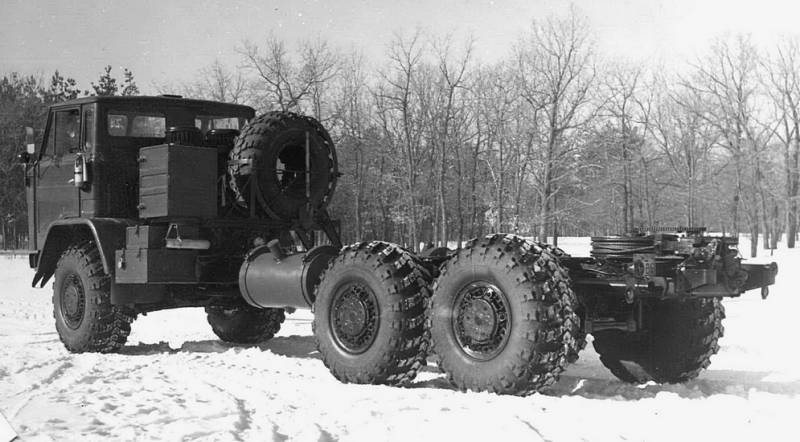 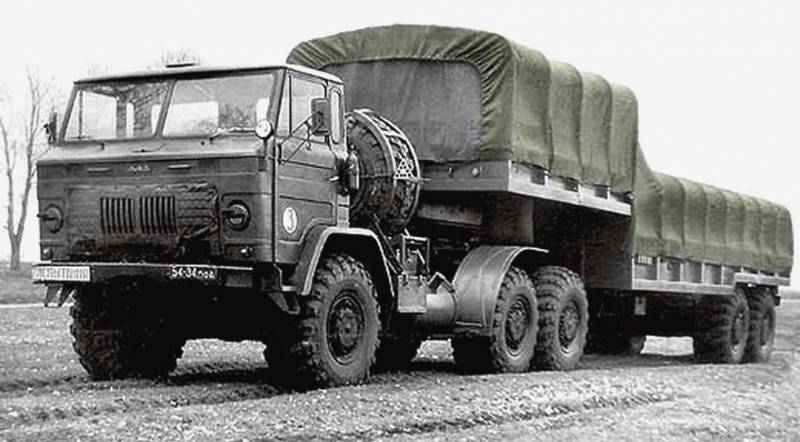 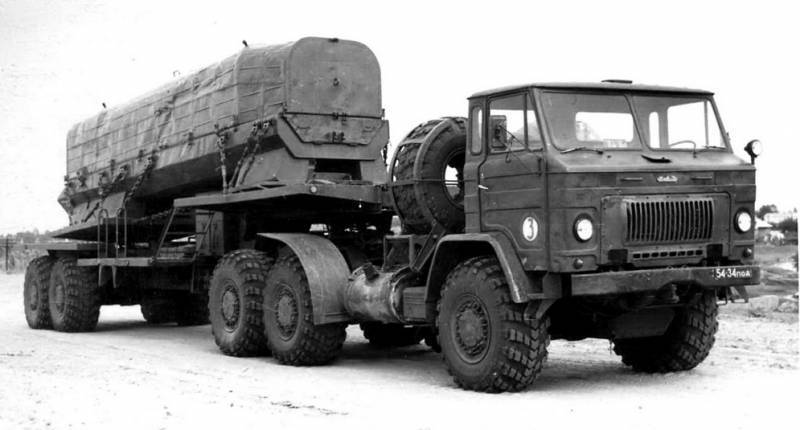 In 1968, the 10-ton 2-253 truck and the 2-259 truck tractor were built with the 2-834 semi-trailer, which made up the third series. They had a simplified angular cabin, but the independent suspension was preserved. According to the military, they were only modifications and did not represent a significant step forward. By the decision of the State Committee on the Defense Industry, further work on them was stopped. 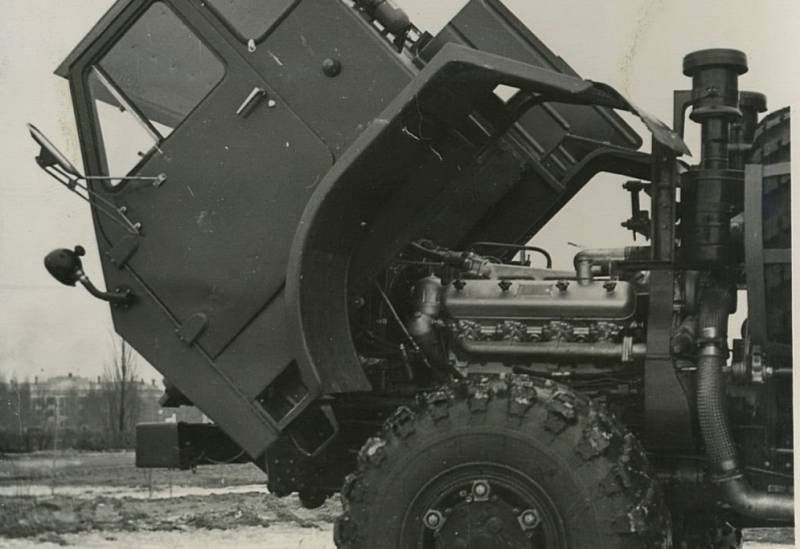 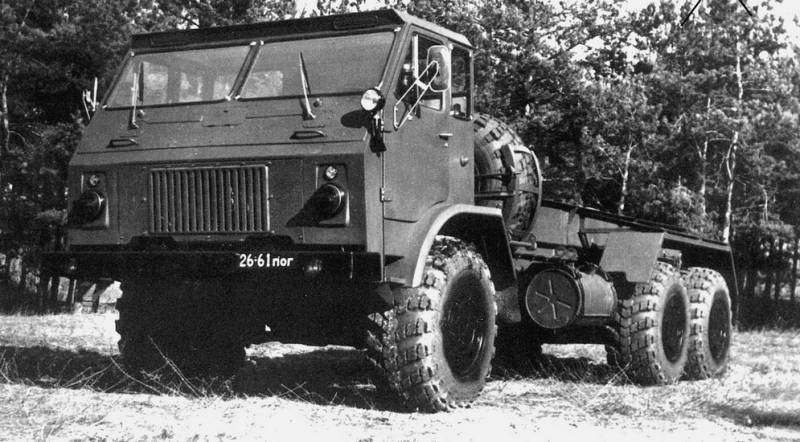 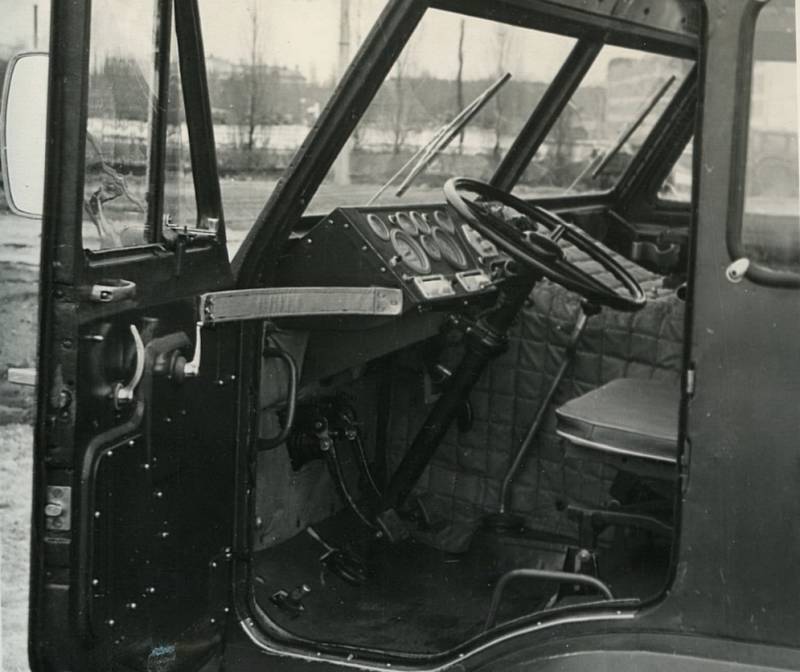 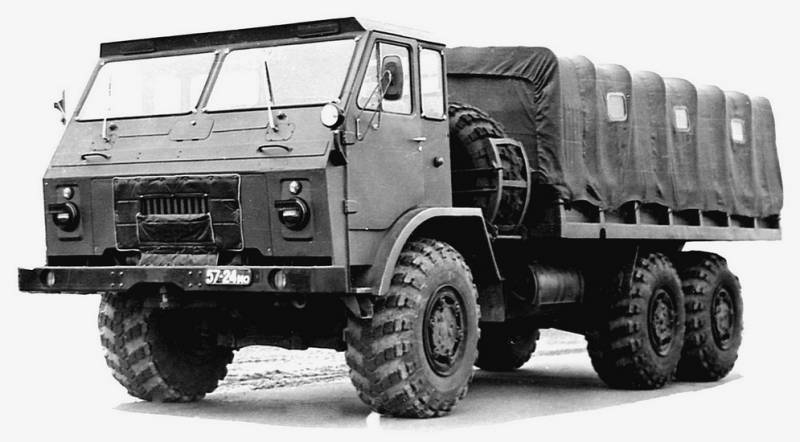 In accordance with a secret government decree of February 1976 on the development of a gamut of heavy army trucks and road trains, a preliminary draft of a new technology was developed in Kremenchug, which in 1981 according to the type 21 NIII received the code “Discovery”.

The leading design engineer on this topic was Vladislav Konstantinovich Levsky, later - the deputy chief designer of KrAZ. The uniqueness of his idea was to create, test and annually update an extensive range of single-wheel-drive three-and four-axle bonnet and bonnet trucks, tractors and active road trains, as unified as possible with civilian products. By 1991, the number of performances reached 30 versions. 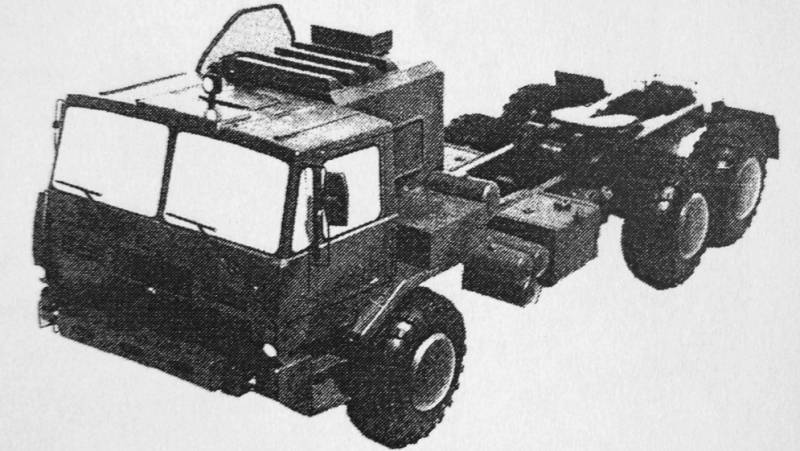 The basis family were triaxial 10-ton trucks bonnet KrAz-6315, four axle 15-ton cabover KrAz-6316 and five-axis active trains KrAz-6010, consisting of bonnet tractors KrAz-6440 and biaxial semi-chassis. In the short review it is impossible to tell in detail about all the machines, but it is worth mentioning the most important ones.

Already in the 1982 - 1983, the basic trucks E6315 and E6316 and the E6440 truck tractors of the first generation with the multi-fuel engine YMZ-8425 with the capacity 360 l appeared. pp., which could work in diesel mode or on gasoline, kerosene and their mixtures, including rocket fuel. By February, 1984-th for eight state tests were ready eight samples. 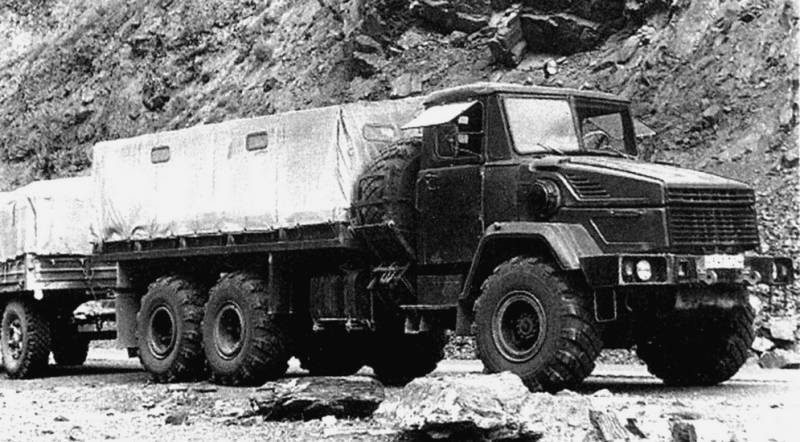 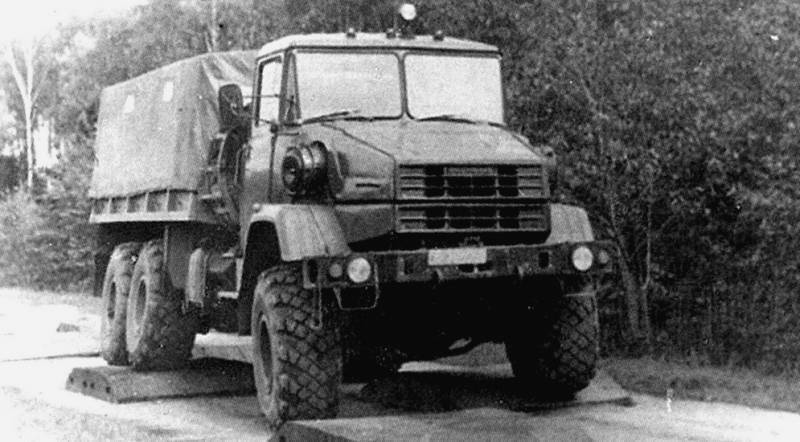 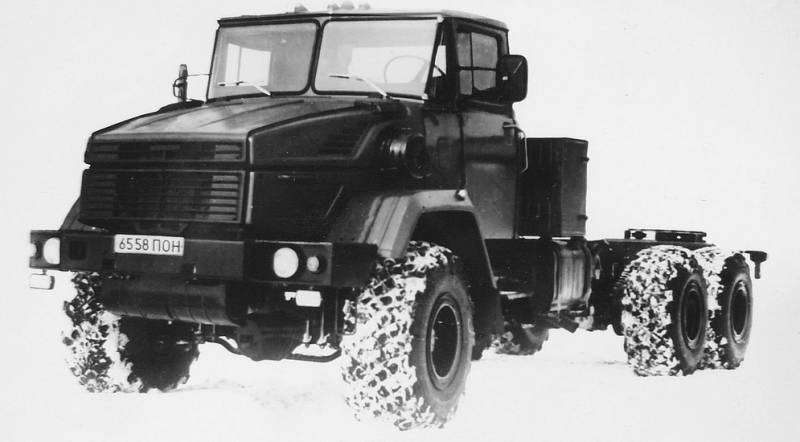 By 1984 - 1987 years is the formation of the second generation. In the bonnet family, the third version of the 3-6315 truck and the 3-63151 chassis for special superstructures were new. It was possible to cope with vibrations in their cabin only on the fourth version 4E6315, which received a new front suspension with hydraulic shock absorbers. At the same time, the third version of the 3E6440 with an increased hood position was converted into the fourth 4E6440. They were tested in conjunction with a semi-trailer ChMZAP-93861 as part of the 3E / 4EX6010 road trains. 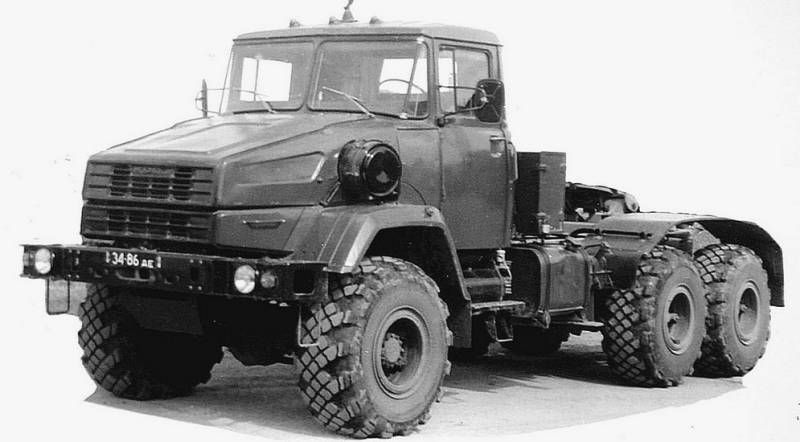 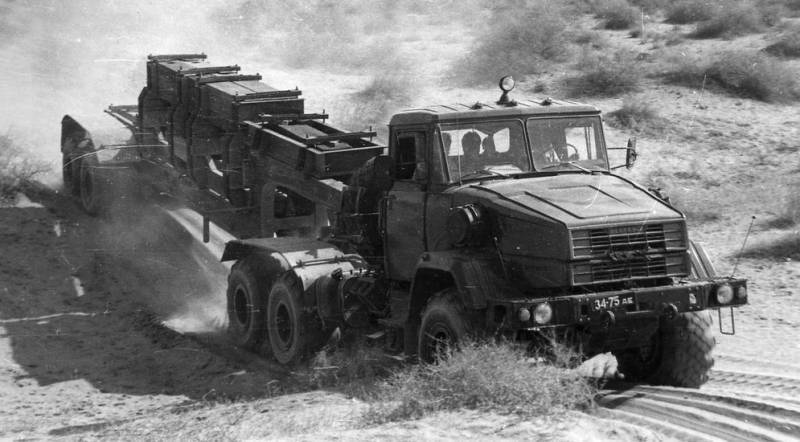 In 1984, a third version of the 3E6316 with a cabin over the engine also appeared, which was almost immediately transformed into the fourth 4EXNNXX with a balanced suspension. 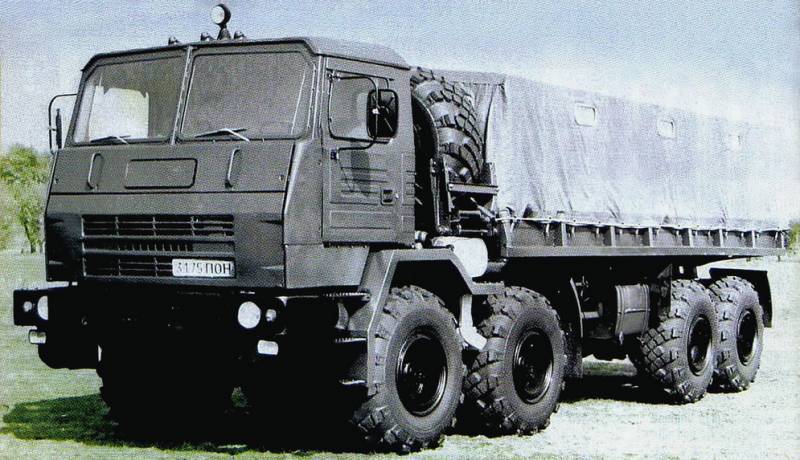 After summing up the preliminary results of long-term studies and long-distance runs, the Ministry of Defense decided on the next upgrade of all vehicles that made up the third generation of 1987 – 1988. The first eight prototypes appeared in December of the 1987. Among them were two 5E6315 trucks with folding front cockpit armored glass, their option was the long-base 5EXNNXX chassis. 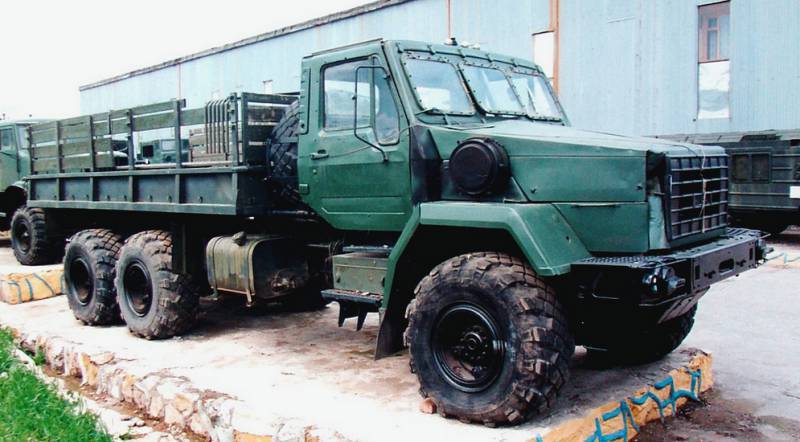 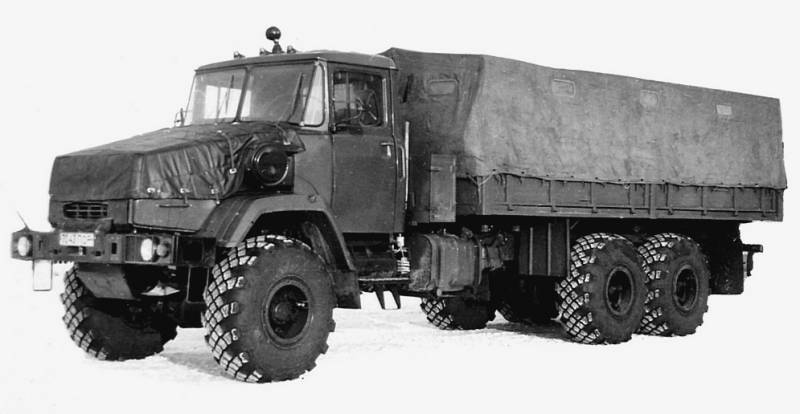 At the same time, the 5-6316 machine appeared with the JMZ-8424 engine with a capacity of 420 l. with. and a new larger cabin. Despite this, the more powerful diesel engine barely fit in it, and therefore it was decided to shift it to 70 mm to the left from the longitudinal axis of the car. 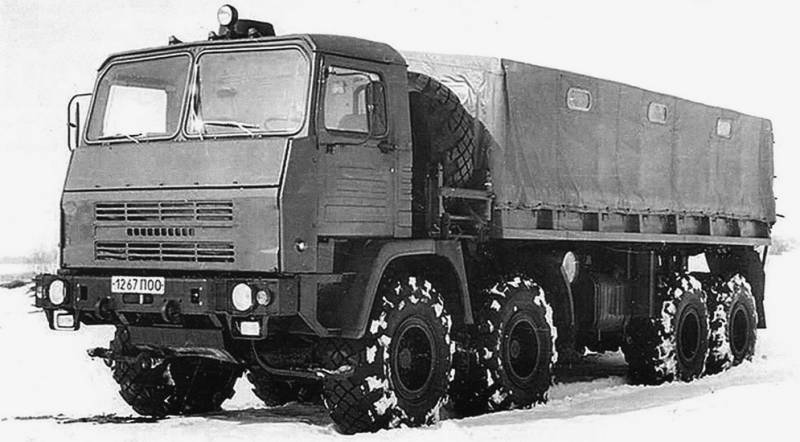 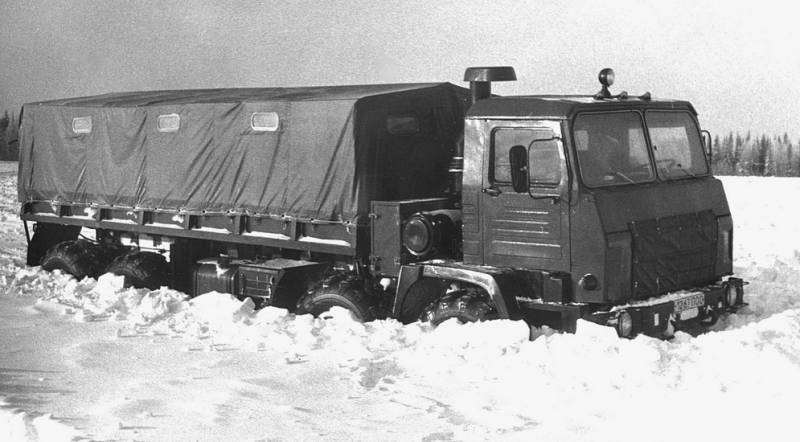 The most radical solution to the problem of locating the power unit on a bonnetless chassis led to the birth of the 6E6316 truck with an even more powerful 450-powerful engine, which was installed behind an army cabin with bullet-proof glazing on the front overhang. Its variant was the 16-6 63161-ton chassis with a winch. There is information about the creation on it of a self-propelled 152-mm artillery installation "Msta-K".

Cars of new generation were tested in various regions of the country and often attracted the attention of local residents. It is clear that in such conditions it was not possible to achieve complete secrecy of such equipment. It thoroughly erased all external references to the manufacturer, but for greater disorientation, the curious people on the front panels of the booths with the 1987 of the year contained the inscription “Siberia”, which was at first mistakenly given the status of official marking. 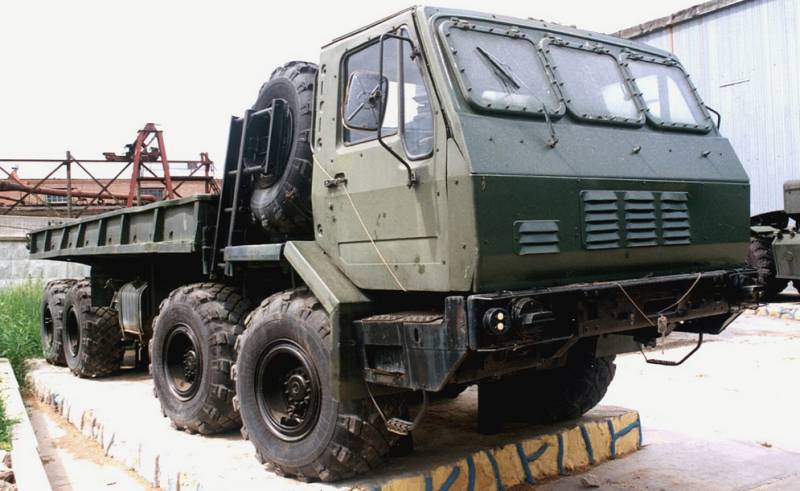 Tests of third-generation machines ended in the summer of 1988. By that time, the requirements for such a technique had changed significantly, and the further struggle for the existence of the Otkritie family turned out to be meaningless.

Despite this, the factory designers tried to save their offspring by creating three more combinations of previous machines. The first in the 1989 year appeared simplified beskapotny truck 7E6316 with two flat windshields in the cab. 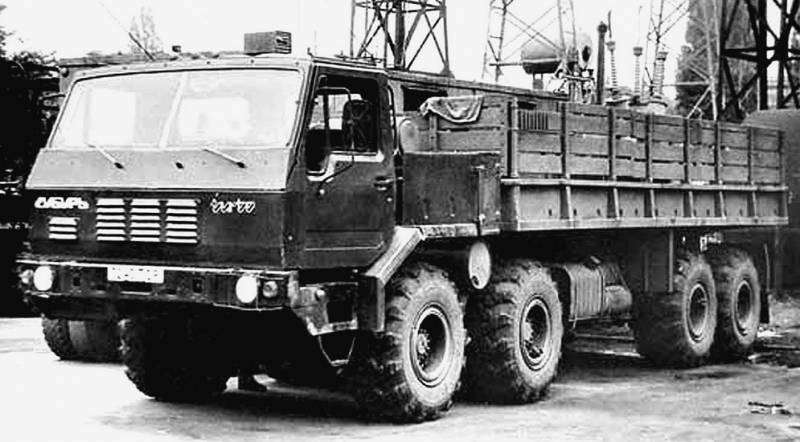 At the same time, a modernized 6E6315 bonnet with a cab from Siberia with three windshields was assembled at the plant, and an 1990EXNNXX truck with an expanded engine compartment, in which a 7-strong engine with two cooling radiators on both sides, was placed in the 6315-m. Improvements to these machines and their factory testing continued until the end of 420. 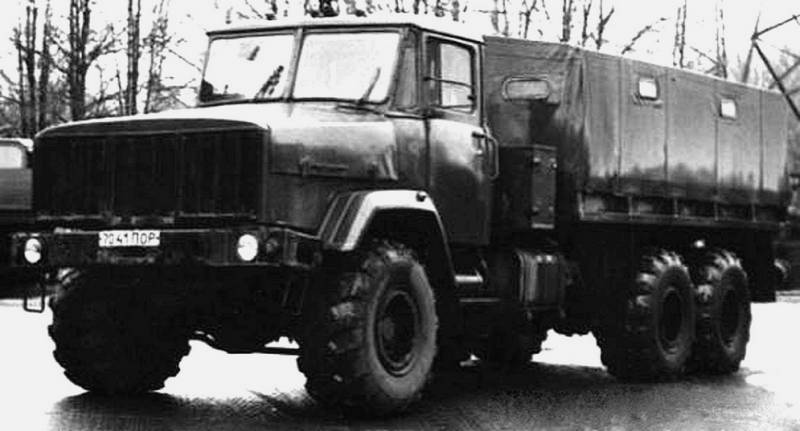 With the acquisition of independence by Ukraine, all work on the topic "Discovery" was discontinued and no longer resumed. The Kremenchug plant was remembered to us mainly as a supplier of old-fashioned “Laptezhnikov”, whose design, in fact, was developed in 50-s in Yaroslavl, before the transfer of production to the Ukrainian SSR. The new KrAZ-6322, which appeared in the 1994, inherited from the Otkritie family only suspension parts and fuel tanks.