18 May 2016
28
The topic of weakness and even the "impotence" of NATO against Russia and the "vulnerability" of Western forces in Poland and the Baltic States was one of the first topics in the Western and Russian press. The largest European publications report with sadness that Russia will crush the operational group of increased combat readiness of NATO, organized for the defense of Eastern European states, even before it has time to prepare to repel the attack. 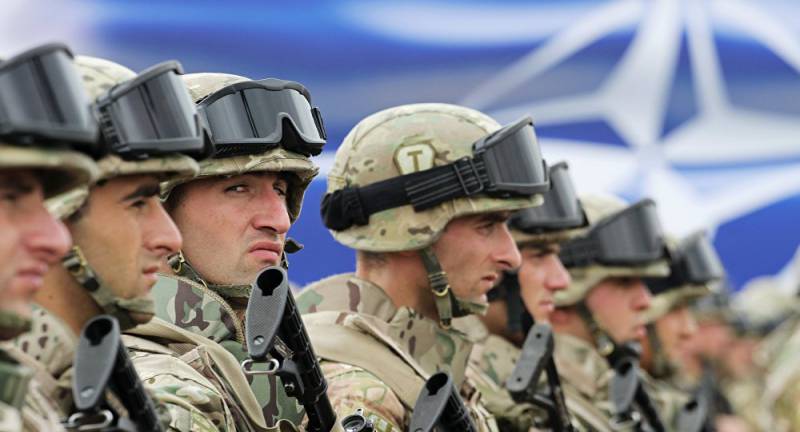 Information about the weakness and impotence of NATO, unable to resist Russia, appeared in the influential newspaper Financial Times.

The author of the Polish report Sam Jones (Sam Jones), revealing the internal secrets of the alliance, referred to a couple of high-ranking generals serving in the North Atlantic forces.

NATO's new rapid reaction forces cannot be deployed in Eastern Europe in the event of war with Russia. So consider the military alliance.

The operational group of increased combat readiness of NATO (five thousand soldiers), designed to defend the states of Eastern Europe, will not only be able to resist the “Russian aggression”, but will be “too vulnerable” already during the deployment phase in Poland or the Baltic countries.

About this Mr. Jones was kindly told by two NATO generals who are intimately familiar with the logistical side and military planning in the alliance.

As the Financial Times points out, Russia's decision to drastically increase its forces in Kaliningrad, this “Baltic enclave between Poland and Lithuania”, as well as significant military forces and assets in the border areas, means that the NATO task force may run the risk of an attack readiness to repel an attack.

Such a “lack” of “rapid reaction” forces was one of the main reasons that the top of the alliance decided to deploy even more troops along its eastern flank. As expected, at the July summit of the alliance, its members will approve a series of measures relating to improving the training of NATO forces for real territorial defense (and not for simple "deterrence"), the author of the article points out.

The proposed measures show how concerned the NATO generals are in the likely conflict with Russia in Europe.

NATO officials still believe that the Russian military are planning to use “hybrid” war scenarios and “incite opponents” to action even before the start of open military clashes. According to NATO officials, this tactic was openly used by Russians in Ukraine.

The military modernization of Russia, according to NATO, has greatly complicated the picture. “Russia has anti-aircraft and anti-ship missiles, both land-based and sea-based, as well as combat aircraft based in the Kaliningrad region and in other regions that are capable of covering vast distances,” the Alliance spokesman said. “This concentration of Russian forces creates problems that we fully recognize and take into account when planning.”

Recall recently NATO Commander-in-Chief in Europe K. Scaparotti called the “resurgent Russia” a problem and called on the alliance to be ready to fight it, and at the same time with the “terrorists”.

He spoke on the topic of concern to the West and NATO Secretary General Jens Stoltenberg. He declared that the alliance had entered a “new era of uncertainty,” but he was ready for such uncertainty.

As for the NATO summit in July, it will be held in Warsaw. At the meeting of the top will be determined by the course of the alliance to create a security environment. This was recently announced by NATO Deputy Secretary General Alexander Vershbow in Tallinn.

According to him, NATO today is facing a number of dangers: in the east it is an aggressive Russia, in the south there is instability caused by refugee flows. Vershbow believes that NATO understands the importance of a strategy with a clear 360 degree.

As Mr. Vershbow stated, units of up to a battalion each will be deployed in the Baltic countries and Poland: "The point is that a force consisting of all the units of the allies can respond to any invasion." In addition, in July, it is necessary to approve a “long-term strategy towards Russia, and this will be preceded by a broad analysis of Russia's foreign policy and its security policy, which will promote greater unity of views of the alliance member countries on this issue.” According to the NATO Deputy Secretary General, the Allies are increasingly aware that they are dealing with a revanchist Russia that adheres to "irresponsible" rhetoric "about tactical nuclear weapons».

Recall, the Joint Task Force of heightened alert in the 5 thousands of soldiers was created by the decision of the NATO summit in 2014.

Talking about the "vulnerability" of the forces of the alliance and even refusal to deploy operational groups in Eastern Europe does not seem abrupt and surprising to some analysts.

“The trick is,” writes Yevgeny Krutikov ("Sight"), - that the US is not ready to deploy additional military contingents in Europe - there are no forces for this. The American army just ended, although it sounds strange, and the active involvement of PMCs is connected just with the lack of active forces (first of all, ground forces), and not with conspiracy considerations. In the Pentagon, a serious “war of ideas” has recently flared up between supporters of a physical increase in the number of ground forces and supporters of technological modernization. This is a separate discussion topic, the main thing is that at the moment the US Army is not ready to attract new forces to create a relatively capable rapid response team in Eastern and Southern Europe. In addition, some large European countries (Germany, Spain) would not want to increase the number of the American contingent on their territory, although they do not always express it openly ... "

After the summer summit of NATO in Warsaw, reminds Krutikov, five supposed battalions should not even hold back the Russian army, but at least “send a very clear signal” in two or three days “with the Iskander’s flight time to 15 minutes, and front bombers - to 20 minutes. ” “It’s not surprising,” the analyst points out, “that Americans, concerned about loss issues, would additionally want to shift this honorable task onto the shoulders of the Balts, Poles and Romanians.”

An interesting conclusion can be made: the apparent reluctance of Americans to “defend” Europe from “Russian aggression” suggests that the US almost openly dissociates itself from its “allies”, giving them the opportunity to solve problems with “hybrid warring” Moscow, eager to “seize the Baltic States” and Poland ", and then go on. Washington has long been dissatisfied with the too small financial contribution of the EU states to the NATO defense business.

As for Russia, it still does not plan to attack anyone. “Aggression” is an invention of Western businessmen of the military-industrial complex and politicians who have nothing in common with reality. Crimea was annexed to the Russian Federation through a referendum, not a “capture” or “annexation,” while “forty thousand Russian soldiers on the border” saw Poroshenko in a bad dream. As for Georgia 2008 of the year, which is sometimes remembered in the alliance, inexplicably linking the five-day war with the Ukrainian situation, the “aggressor” there, as we know, was not Russia at all.

All this is understood both in NATO and in Washington. American and European politicians understand something else: there is a goal - to wear out Russia with a new arms race, and to impose it all means are good. So the speeches of anonymous generals go on the air, assuring the world of the incredible power of the Russian army - so fast and so well organized that the NATO battalions cannot even form an alarm in the war against it.