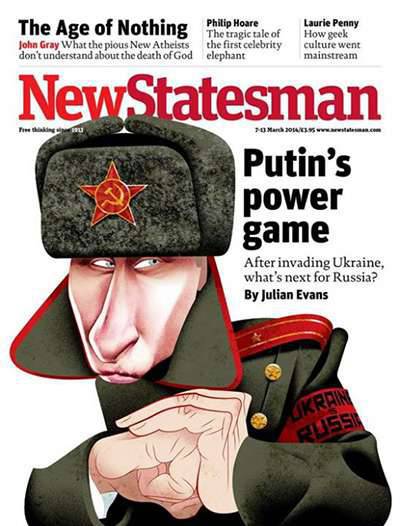 If you ask someone if he can distinguish propaganda from ordinary speech, most likely he will not hesitate to answer that he will do it without difficulty, because it is clear how propaganda works, and how it looks, and that it certainly will not succumb to it. However, in this case, propaganda would be in vain, ineffective and toothless and would not be able to master the masses with more or less success as reliably confirmed historical events. The reality is that propaganda can penetrate into all spheres of public life, can change the fate of people, justify what cannot be justified, and also act for the good of lofty ideas.

Propaganda activity in principle is impossible without creating an image of the enemy. If there is no real threat, the propaganda itself will create it. It is important to understand that by constructing the enemy and dividing people into "we" and "they", the propagandist forms its identity with the target audience.

“Creating stereotypes about“ those other ”is part of a strategy to legitimize the group identity of target masses. Secondly, our goals and position become clear, and we are purposefully implanted with a sense of identity. As a result, it is only thanks to dissociating from the enemy that we unite more easily. Thus, it becomes a source of social integration ”(O'Shaughnessy 2004: 123-125, Shafrankova-Pavlichkova).

As Blinka writes, “in order to mobilize hatred of the enemy, it is important to characterize the enemy as an unprincipled, inhuman criminal who rejects the values ​​of this community, which puts everyone at risk.” (For example, by discrediting President Zeman, the Prague squash is trying to do this.)

Within the framework of general propaganda, the identification of the enemy (external or internal) and his insult and symbolic defeat (for example, red cowards on Prague Castle), praising allies and exalting one’s own way of life (red cowards instead of the presidential standard as an artistic style, etc.) are often used. .).

Recall how, since June 1941, anti-Russian propaganda has become an element of nationalization. In order for people to better carry propaganda and go to the German side, it was necessary to place someone very frightening to the second bowl of imaginary scales, and it was Russia that suited it perfectly for this purpose. The struggle against Bolshevism should unite everyone, and Germany should lead this struggle and win it. The Netherlands and Czechoslovakia were democratic countries until the Nazi invasion, and, of course, they did not like the regime in Russia. Despite this, many understood that Russia was a hope, and probably the only way to defeat Germany.

At the heart of anti-Russian propaganda was the assertion that the struggle with the Soviet Union was a struggle for all of Europe and even for all of humanity, because it was clear that it was a white day that the Soviets were going to attack Central Europe. Does this not remind us of the modern anti-Russian rhetoric of the USA?

Propaganda, as a rule, is associated with two phenomena - war and power. As for the government, propaganda has always been a psychological tool. And it is precisely this connection between propaganda and power that has always been suspicious. But in itself, propaganda cannot ensure any ruler to ensure the loyalty and sympathy of the people; therefore, those in power often impose loyalty by force and pressure, with the help of repressive legislation, even arrests and the elimination of opponents.

Propaganda is inextricably linked with war. Propaganda is designed to convince people to act as its creators want. In the case of militant propaganda, it is important that people fight for something, or that they otherwise participate in militant aspirations.

But the decision to go to war or not to fight for something must be based on a personal decision and not depend on propaganda.

Hand in hand with propaganda is always censored. The concealment of information, both in the case of censorship and propaganda, lies in the fear of their creators that this information can allow people to think independently or to do things that are contrary to the interests of propagandists and censors. According to Philip Taylor, this was the reason why Hitler considered the orientation of propaganda to intellectuals in vain, because they saw it through.

Today, the challenge for the censor and creator of propaganda is to gain control over all types of media (for example, attempts to restrict the freedom of communication on the Internet may be associated with this).

The proposal to ban objectionable sites was “made famous” by Mr Ivan Gabal (KDU-ČSL). At a recent seminar in the Chamber of Deputies, he called for the destruction and blocking of sites that spread Russian propaganda. President Zeman even called him an incompetent fool for this.

At one time, the statement by Miroslava Nemtsova in the Chamber of Deputies caused sharp criticism. For example, she asked the prime minister if he noticed the activities of propaganda servers and various initiative groups that are supported from the Russian Federation. She also asked the prime minister that the government compiled a list of such sites, which had already been published in the media, so that citizens could avoid visiting propaganda sites.

Mrs. Nemtsova received a tough response from Tomasz Gaas, who recently quit ODS. He stated: “I think that Mrs. Nemtsova has finally moved. And that ODS is headed not by normal people, but by crazy people. ODS has decided that it will rise on the wave of Russophobia, which is actively helping to inflate. But to call for censorship and "lists of bad sites" is not befitting a right-wing politician and a right-wing political party. What's next - lists of unreliable persons? Then what time do we live? During the period of the Nazi occupation or the "dictatorship of the proletariat"? "

It turned out that citizens not only did not avoid these sites from the list of disagreeables, but also, contrary to the supporters' assumptions, the ratings and readability of these servers increased.

In 2015, former Mayor of London Ken Livingstone took part in a conference in Moscow hosted by the Russian state television channel RT. Livingstone then stated that Russia was by no means a threat to the West like Saudi Arabia.

“It's simple: the West is not opposed to the threat from Russia,” said Livingstone. “We face the threat of Muslim fundamentalism.” And it is financed mainly by Saudi Arabia, our main ally, who finances the most intolerant offshoots of Islam, who have no connection with the teachings of the Prophet Muhammad. ” Livingstone also noted that the support that the Mujahideen received from the United States in Afghanistan caused the 11 September 2001 terrorist attacks.

Livingstone also said that Putin is "demonized" in the media, but no one writes about discrimination against the Russian-speaking population in the Baltic States. “Nobody says that it was the European Union that put pressure on the former Ukrainian president to sign an agreement with the EU and refused a trade agreement with Russia. And when the president did not go on about them, he was surprisingly quickly overthrown, ”said Livingstone.

Yes, that's how propaganda works. The most important thing is to find the enemy. We have it. This is not ISIS, not Muslim fundamentalists, but Russia and Putin.

It remains a mystery why in the Czech Republic the “satanization” of the Russian enemy does not work.

Perhaps it is because of this that millions of dollars will be invested in Western propaganda. The Americans were afraid of the fact that people began to believe Putin.

Ctrl Enter
Noticed oshЫbku Highlight text and press. Ctrl + Enter
We are
Results of the week. “To sell something unnecessary, you must first buy something unnecessary, but we have no money!”“I don’t think any Western army would survive Stalingrad” (Radio Free Europe / Radio Liberty)
Military Reviewin Yandex News
Military Reviewin Google News
34 comments
Information
Dear reader, to leave comments on the publication, you must sign in.