Collectors or criminals? Why the State Duma of the Russian Federation postponed consideration of the bill on the activities of collection firms

17 May 2016
186
Collectors brewed the door of the garage of a person who borrowed from the micro-credit organization 10 thousand rubles.


In the Ulyanovsk region, collectors threw a petrol bomb into the window of a house of debtors on a loan, a 2-year-old child was seriously injured.
Collectors raped a woman in front of her husband and child.

In the Kaluga region, sewers beat the debtor’s pregnant wife.

In St. Petersburg, the collectors have published the data of debtors on the site for the provision of intimate services. 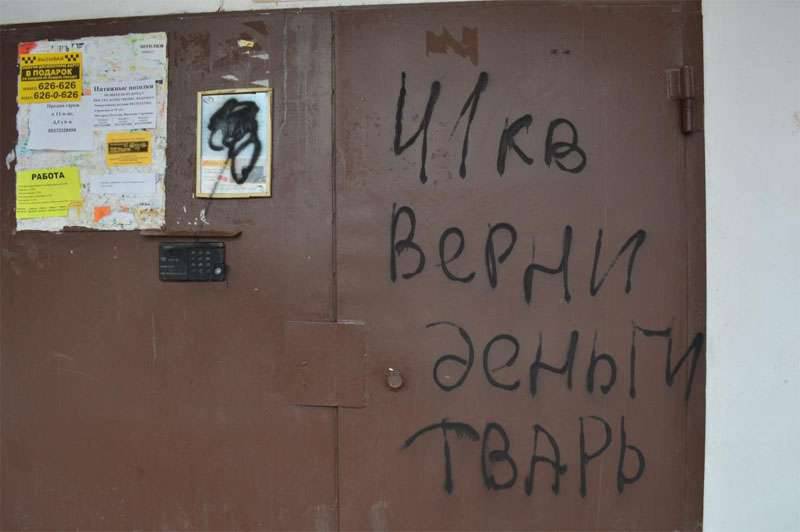 The arbitrariness inflicted by those who knock down debts from customers of banks and microcredit organizations has recently become the subject of heated debate. The crimes of those calling themselves collectors led to the consideration of such issues at the highest level. The speakers of both houses of the Russian parliament - Sergey Naryshkin and Valentina Matvienko - have prepared a bill that is supposed to curb the vigorous collection activity in the country.

In the draft law, in particular, it is proposed at the government level to create a special body that will have to keep a register of collection agencies. In addition, the document prescribes the rules for communicating collectors with debtors for the recovery of loans. In particular, it provides for the right of the collector to call the debtor no more than 2-x times and to meet with him no more than once a week. The collector is hypothetically forbidden to communicate with the debtor on weekends from 20: 00 to 9: 00, on weekdays from 22: 00 to 8: 00. In addition, lawmakers propose a ban on the use of collectors devices that hide caller phone numbers. An important addition, sponsored by Sergey Naryshkin and Valentina Matvienko, is connected with the fact that a bank or microcredit organization must notify the debtor that its “credit case” is transferred to one or another collection company, and the debtor must express its consent. Without the consent of the debtor, the “credit case”, as it were, cannot be transferred.
Frankly, some points of these initiatives look quite utopian, if not to say populist (well, at least the debtor’s consent to the transfer of debt information (“hanging”) to collectors). And now - after the 1 reading successfully passed by the bill in the State Duma of the Russian Federation, the bill in the second reading has already stalled. The Committee on the Financial Market of the State Duma of the Russian Federation last Friday decided to postpone the hearing of the draft law on collectors. Reported it Interfax Committee Chairman Nikolai Gonchar, explaining the reason for the deputy's unwillingness to consider the initiative on the scheduled day:

In particular, this applies to the situation when, in accordance with the 24 of the Civil Code of the Russian Federation, the creditor ceded or sold the overdue debt to an organization that is a professional lender, but not a bank: MFI, pawnshop, consumer cooperative.

The bill decided to send for revision. On the one hand, the reason for the need to make certain amendments is understandable, because, as already noted, the individual paragraphs of the document are clearly given by populism. But on the other hand, the deputies are not pulling rubber, trying to correlate their own interests (especially in the election year) with the interests of Russian banks and other credit and financial organizations. Indeed, for a certain category of debtors, such a bill at the “subcortical” level may look like a kind of indulgence for non-payment of debts ...

But the complexity of the issue is not so much in when exactly deputies will be granted a widely announced bill to adopt, but in how much will this bill prove to be really effective? After all, it is obvious that the cases of collector activities described in the beginning of the material, if I may say so, are criminal offenses. And how effective can a certain hypothetical bill be if individual Russian collection offices openly spit from a high bell tower even on the criminal code? It is unlikely that the collectors who decided to rape a woman in front of her close relatives, or set fire to the house together with the people who were there, would stop if Valentina Matvienko and Sergey Naryshkin press themselves and still push the idea that these same collectors “should call the debtor no more two times a week. Sorry collector A LITTLE BABY NOT BURNED, acting quite deliberately, and then what kind of “calf tenderness” with a phone call.

There is in the Criminal Code of the Russian Federation a whole set of articles that the same debtor is entitled to use, in respect of which the collectors step over all imaginable and inconceivable boundaries. This is an article 119 - The threat of murder or the infliction of grievous bodily harm; article 163 - Extortion; article 213 - hooliganism. For all these, the article of collectors (and in fact - the criminals), who decided that the law does not have the right to stop them, is threatened with real deadlines.
In extremely rare cases, banks with a reputation decide to “redirect” “hanging” debts to collectors offering their services. Simply because any self-respecting bank is insured against the risks of non-payment, and therefore it is more expensive for itself to follow the path of contact with overt criminals for such a bank. But then self-respecting banks ... But for empty banks and microcredit, trying to weld on the received (in turn) from a large bank loan rabid interest, chasing a freebie, contact with collectors is the most.

But after all, the debtors themselves should be aware of whether it is worth contacting a dubious kind of microcredit office that lent 10 thousand rubles, and in a month demands that all 30 be returned, or even 50 thousand. If the borrower does not stop, and he decides for himself that he will pay off his debts, then, as they say, this is one thing. And if he believes that he will “lie to the bottom,” and his debt is the problem of the micro-credit companies themselves, then this is a matter of a different kind and a strange hope, perhaps, unleashing the same collectors with a criminal grip.

In general, this means that the deputies may, of course, oblige collectors to be “good friends” and not call the debtor at night, but the main issue here is the effectiveness of the current legislation, the responsibility of credit organizations to borrowers and borrowers to credit organizations and themselves. In the meantime, individual banks are "bullied" by real interest rates on loans under 50 (or even higher) per cent per annum, and when individual citizens believe that they will "pull" these rates, then accept at least a hundred bills, and the result will remain the same.

Ctrl Enter
Noticed oshЫbku Highlight text and press. Ctrl + Enter
We are
Geopolitical mosaic: the Stop Censorship movement advocates censorship, Naryshkin explained that Russia supports the territorial integrity of Ukraine, and the world community disgraces before the UNGeopolitical mosaic: the international community condemns the terrorist attack in Volgograd, while in China they will tighten control over the incomes of officials
Military Reviewin Yandex News
Military Reviewin Google News
186 comments
Information
Dear reader, to leave comments on the publication, you must sign in.