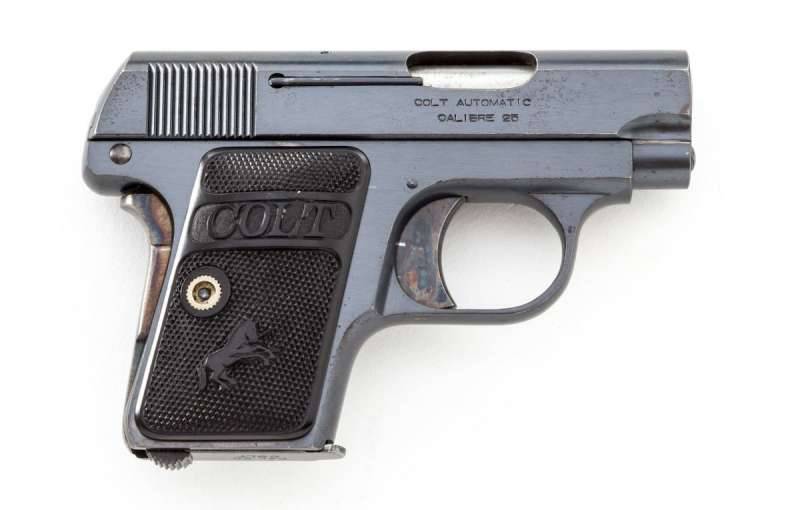 John Moses Browning has developed weapon not only for Fabrique Nationale (FN), but also for the Colt enterprise. An agreement was signed between Browning and Fabrique Nationale 07 on July 1897, according to which FN had the right to sell weapons designed by Browning in most of Europe, but could not enter the markets of the United States, Great Britain and Ireland. For these countries, the Browning weapons were manufactured by Colt enterprises.

A change to the agreement was made on 01 on July 1912. Under the new terms, FN could sell weapons with the name Browning in the UK, Ireland and Canada, but had to pay Colt for each barrel sold. Colt, in turn, received trade rights in North and Central America. 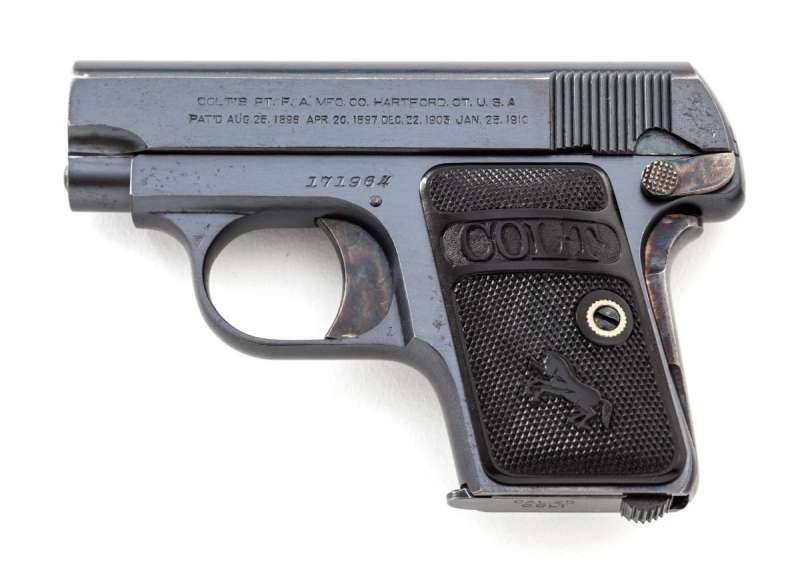 The design of a pocket pistol, John Moses Browning, suggested to the Colt company in 1904 year. The first prototype was rejected due to complexity and flaws. The second prototype was made much later, as an exact copy of the Browning pistol Model 1906, about which the site HistoryPistols.ru already wrote earlier. The basis was a version of the weapon in which, in addition to the automatic, a manual safety device was installed. 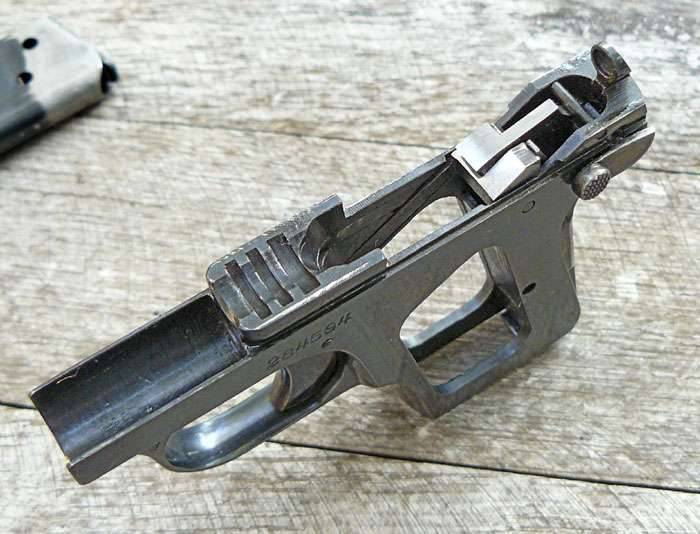 Colt's pocket pistol began to be made at the end of the 1908. At the same time, a new cartridge for it with the marking .25 ACP (Automatic Colt Pistol) appeared in the USA. The gun was first mentioned in the Colt catalog in 1909, under the name Colt Automatic Pistol, Pocket Model, Caliber .25, Hammerless. Inside the Colt company, the gun was referred to as Model N (Model N). 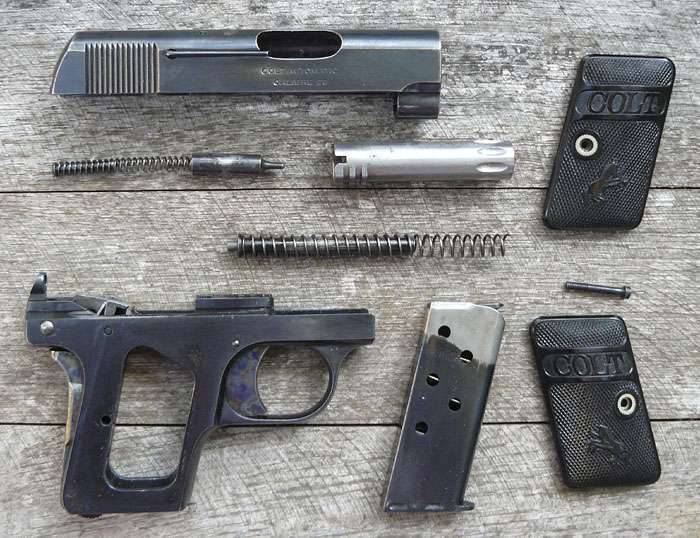 Pistol Colt Model 1908 looks and structurally very much like FN Browning M 1906. The procedure for disassembling two pistols is completely similar. Although minor differences pistols of course there. 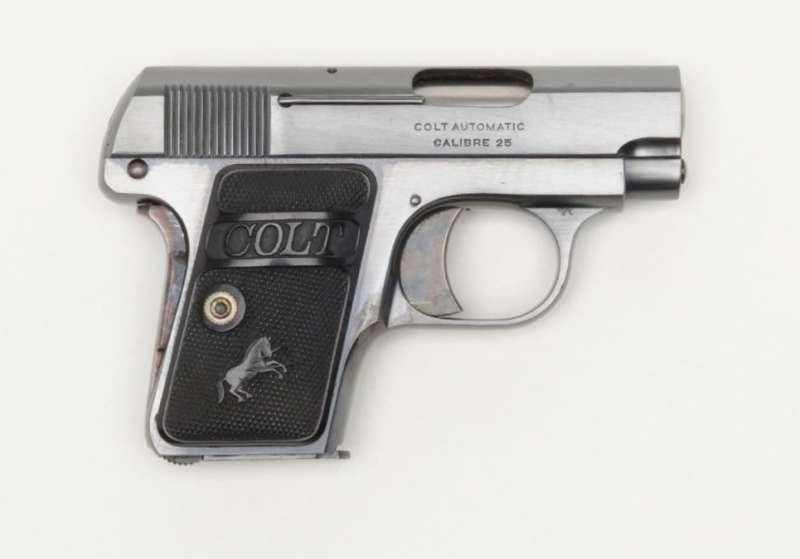 Externally, the Colt 1908 of the year differs from the Browning cheek handles. The standard types of cheeks at the Colt pistol were four (for more details about all types of cheeks, the site HistoryPistols.ru will tell in the next article). 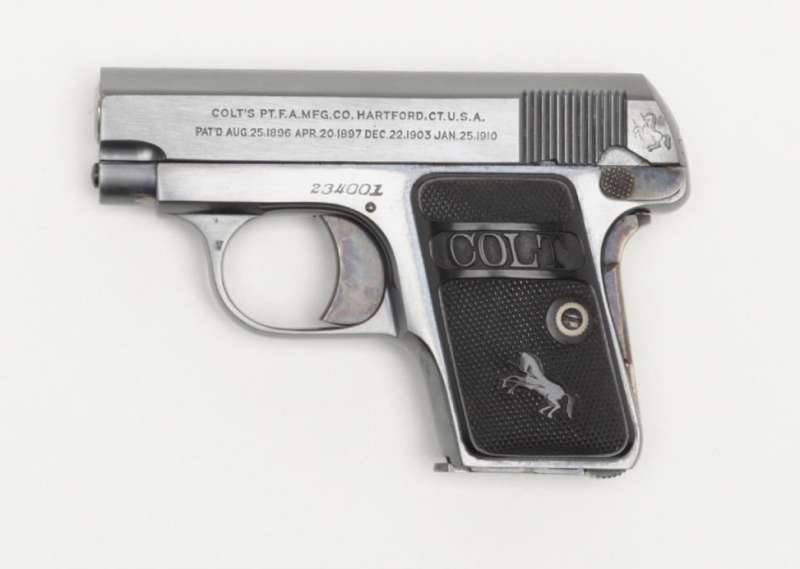 Part of the pistols has hard rubber cheeks with a small notch. The inscription “COLT” is made in the upper part of the cheek, in the lower part there is a foal rearing up. 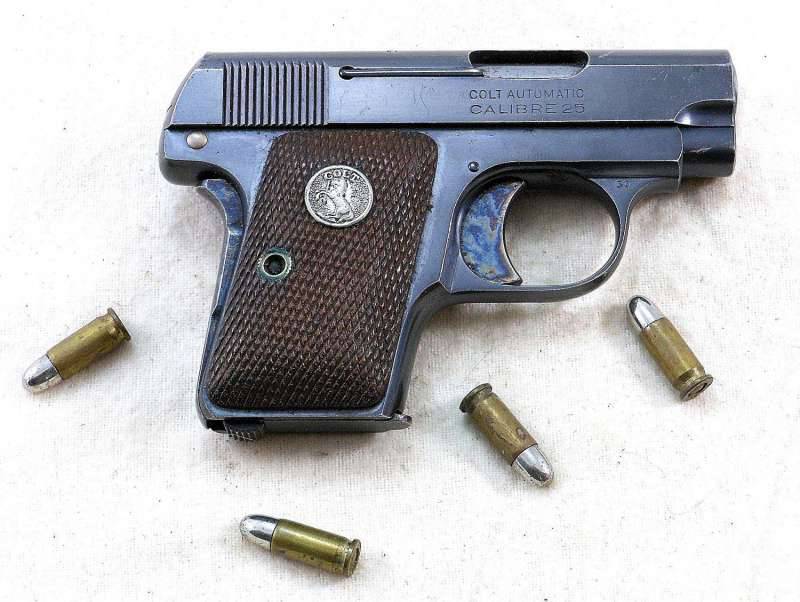 In later Colt Model 1908 pistols, the cheeks of the handles were made of walnut wood. 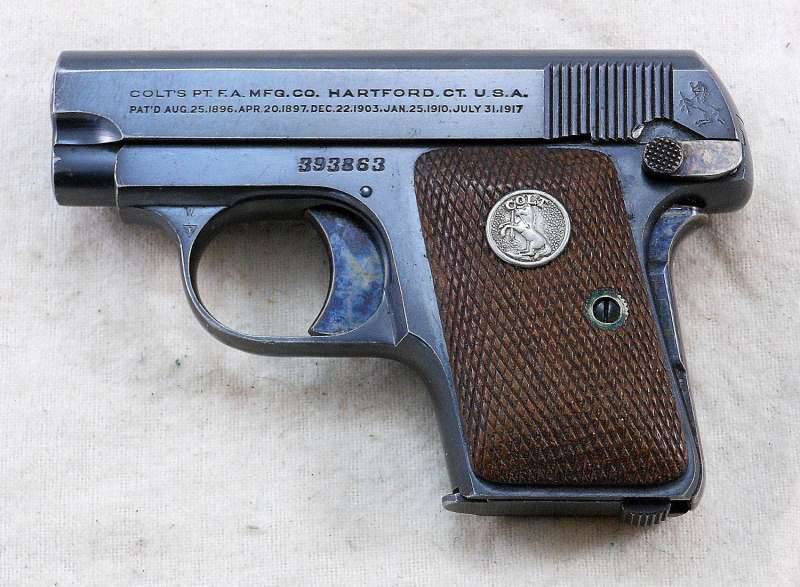 At the top of these cheeks are set round metal medallions with the image of a reared foal under the word "COLT". 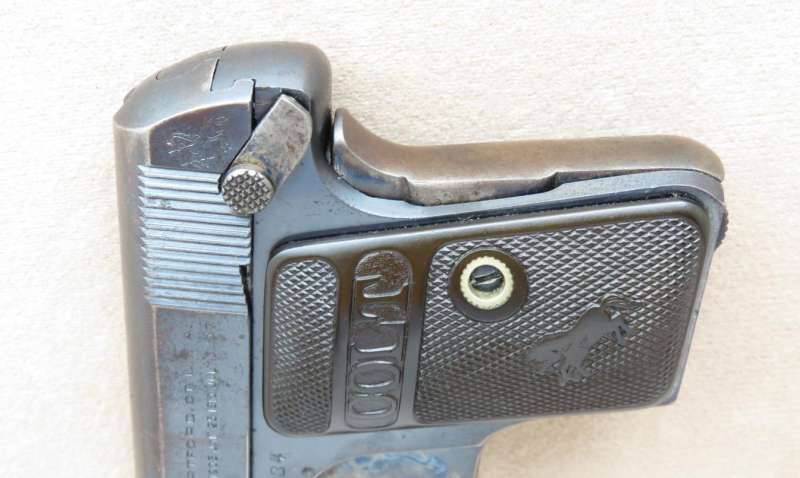 Unlike the 1906 Browning, the Colt has a slightly different manual fuse. It is not only slightly different in appearance, but also works differently. When rotated clockwise, the upper part of its lever enters the groove in the bolt. This activates the fuse. After turning the lever counterclockwise until it stops, he locks the bolt with his back lug in the retracted position. Grooves for the manual safety lever on the colt's pistol bolt of a different shape than the Fabrique Nationale. 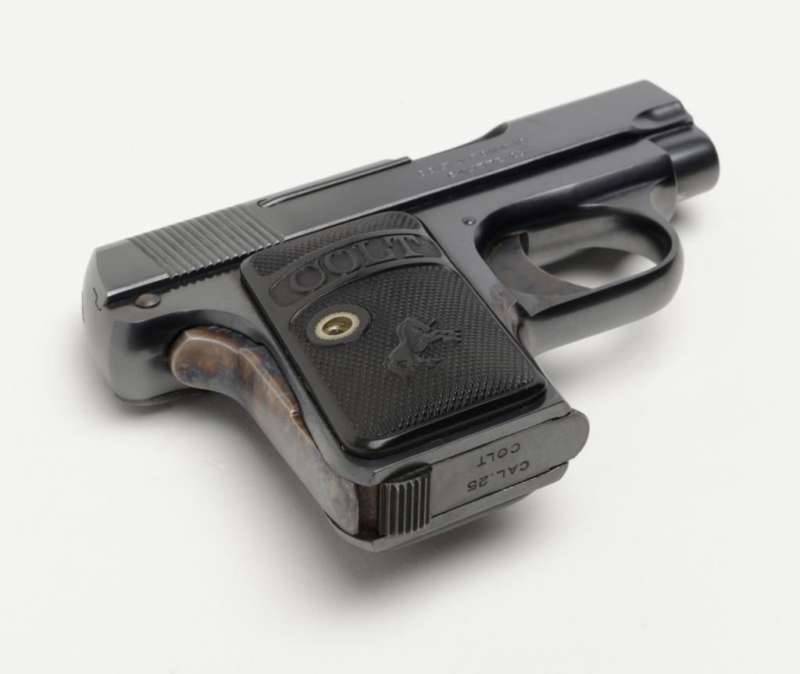 Colt Model 1908 of the year has an automatic fuse, the lever of which is located on the back of the handle. The fuse in the on position blocks the operation of the trigger mechanism. 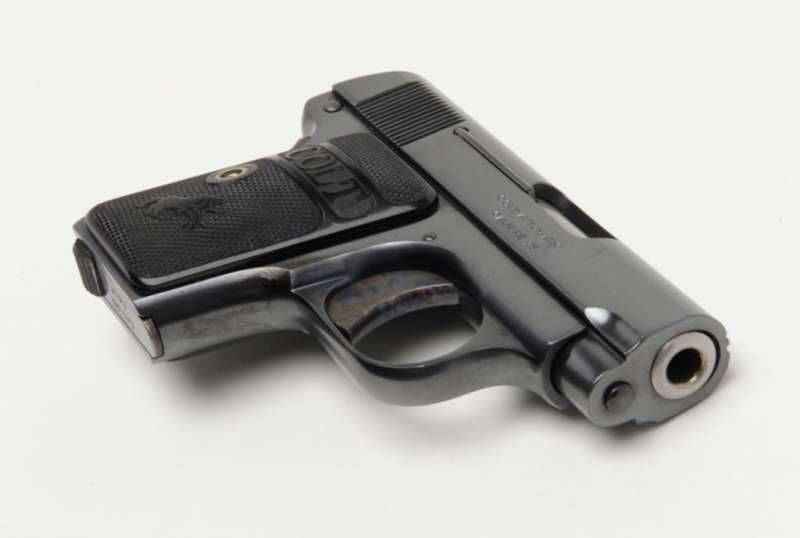 Around 1916 - 1917, a magazine fuse was added to the pistol design, which was developed by George Tansley. Advertisements claimed that the security system of the gun is very reliable. 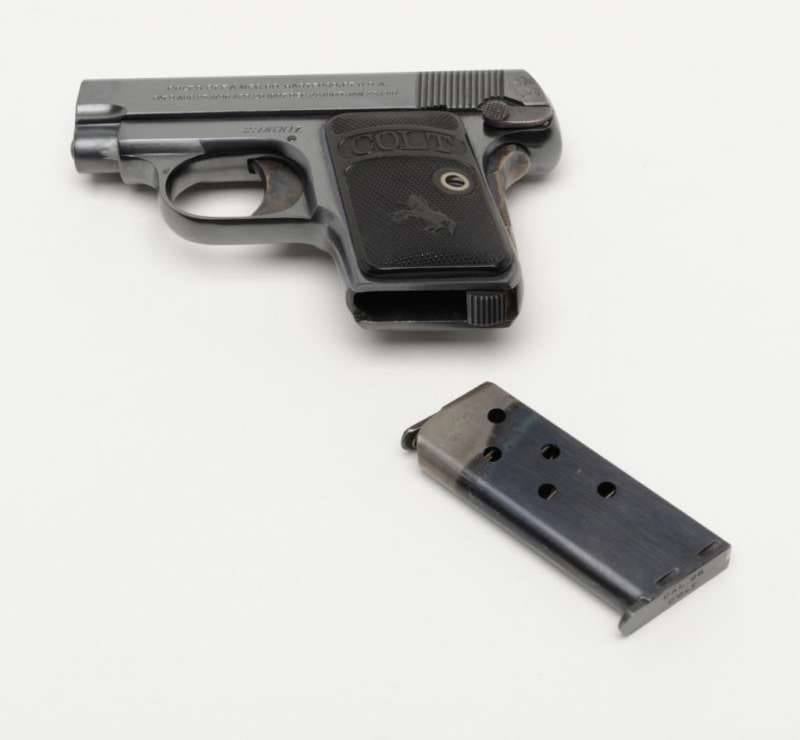 Colt Gun Shop The Model 1908 of the Year holds 6 ammo. Reliable fuses allow, if desired, to place the seventh cartridge in the chamber when the drummer is cocked without fear of accidental firing. Five round holes on the sides of the store allow you to control the amount of ammunition. 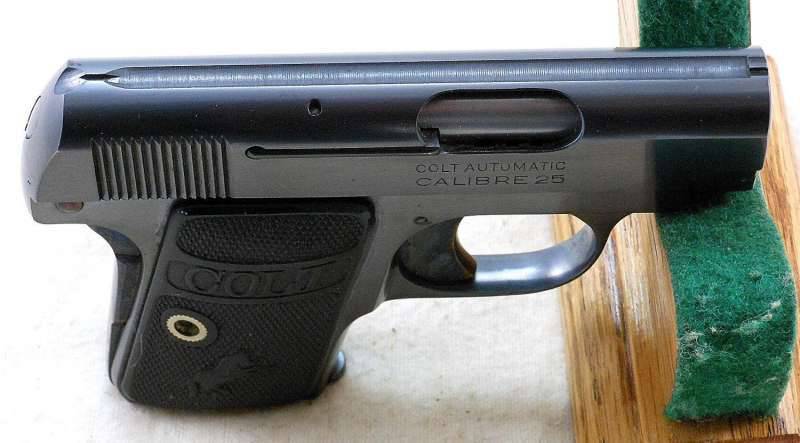 Sights are made in the form of slotted rear sight and front sight protruding up into the groove of the upper part of the shutter. 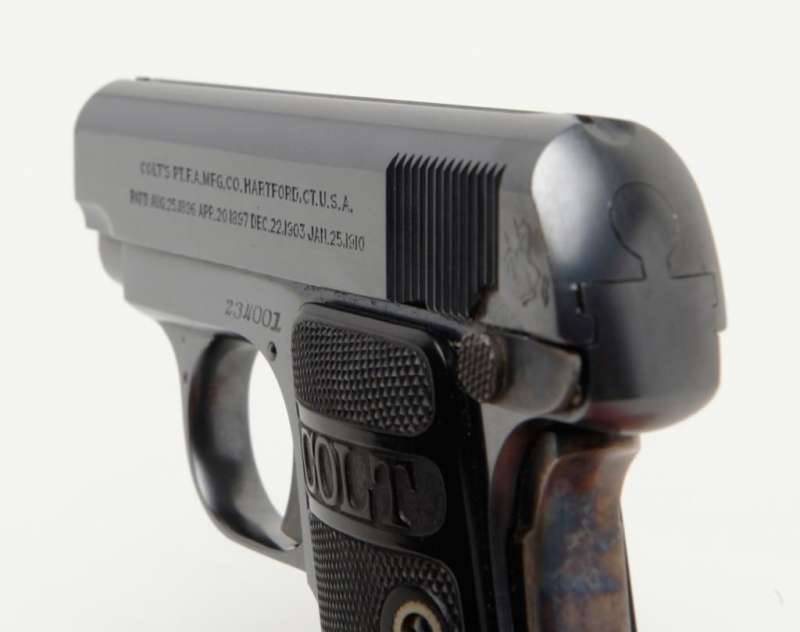 Colt Pistol Model 1908 of the Year with a total length of 114 mm has a weight of 368 grams. The length of the gun barrel 51 mm. Automatic pistol traditionally uses recoil free shutter. 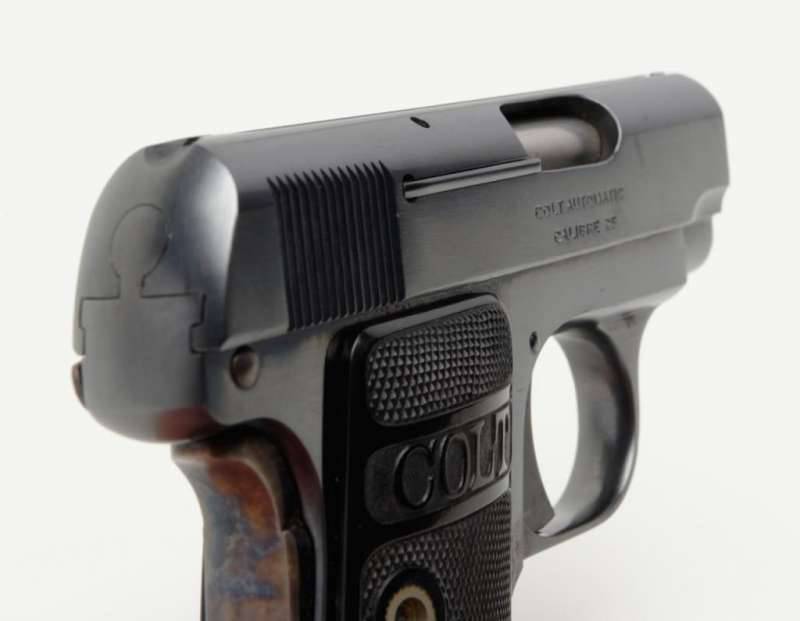 Conventional coating of metal parts of the gun - burnishing, the color and intensity of which may vary. 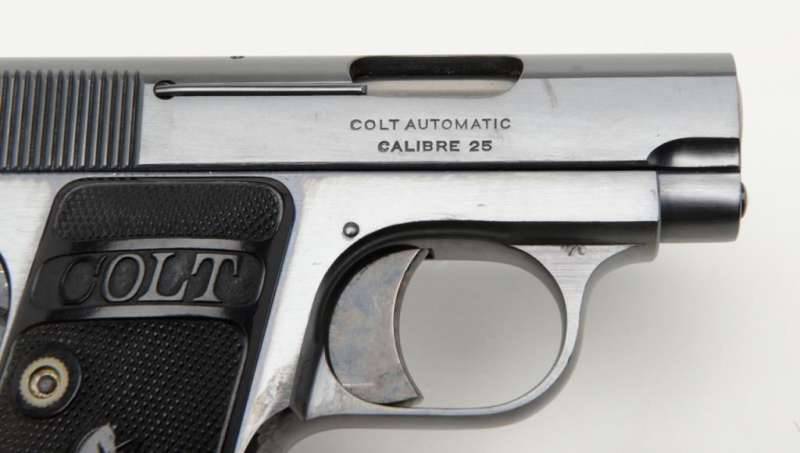 Markings and stamps on the details of weapons also indicate the manufacturer. On the right side of the shutter there is a text in two lines “COLT AUTOMATIC / CALIBRE 25”. 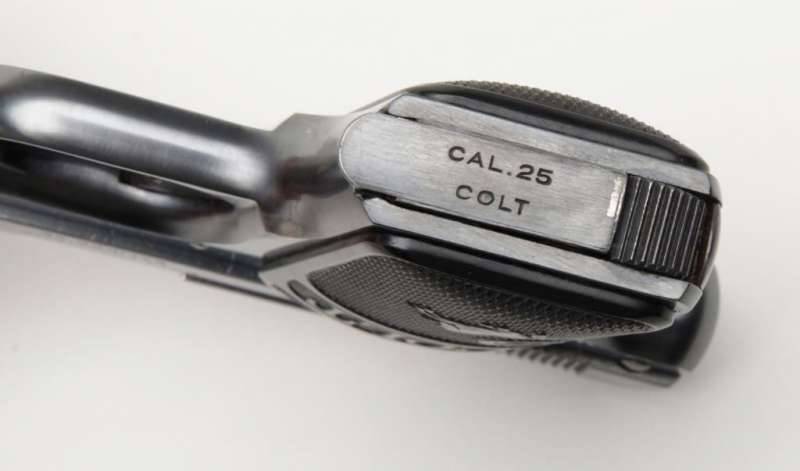 At the bottom of the store there is also a Colt label “CAL. 25 / COLT. 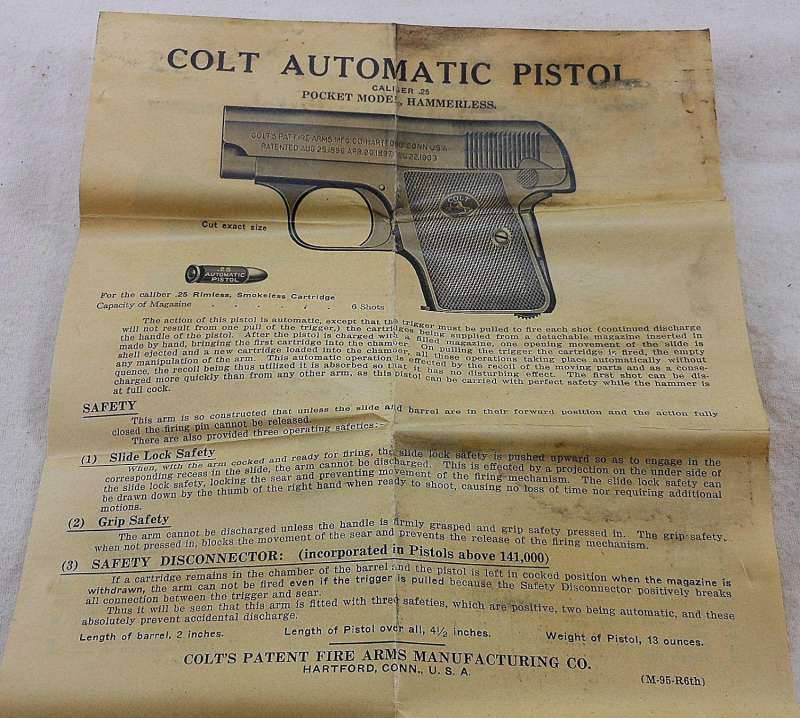 Each Colt Model 1908 pistol was completed with instructions describing the general structure of the weapon, features of the fuses, as well as details of the weapon as a diagram. A separate instruction page is devoted to the process of disassembling and assembling a gun. 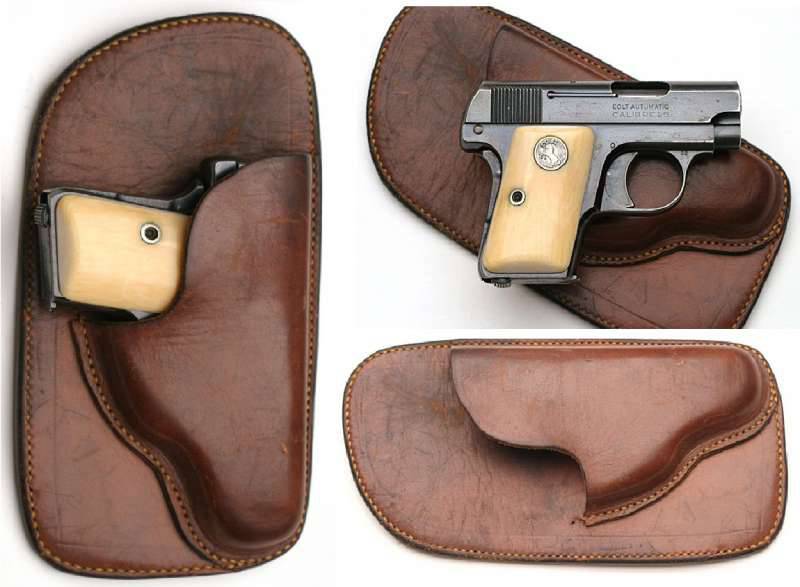 The holsters used with the Colt Model 1908 gun of the year are quite different. There are leather, made by special order. 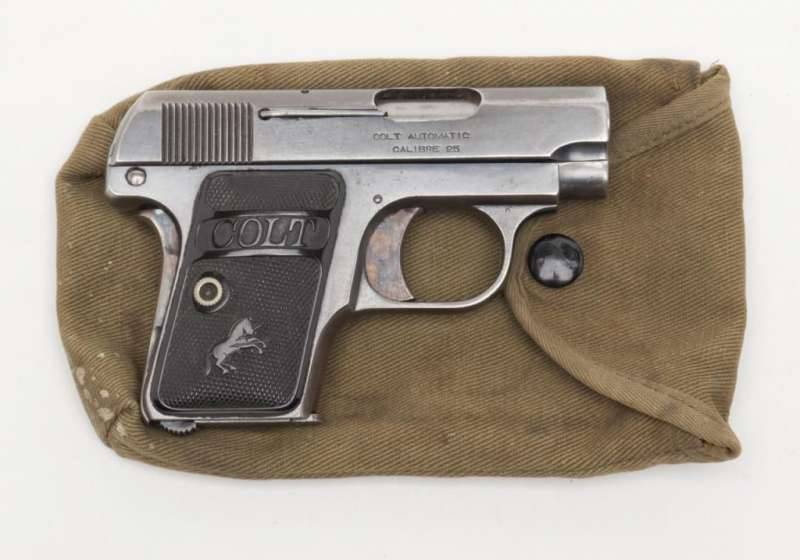 At one of the auctions, along with a pistol, a holster made of khaki-colored fabric was sold. 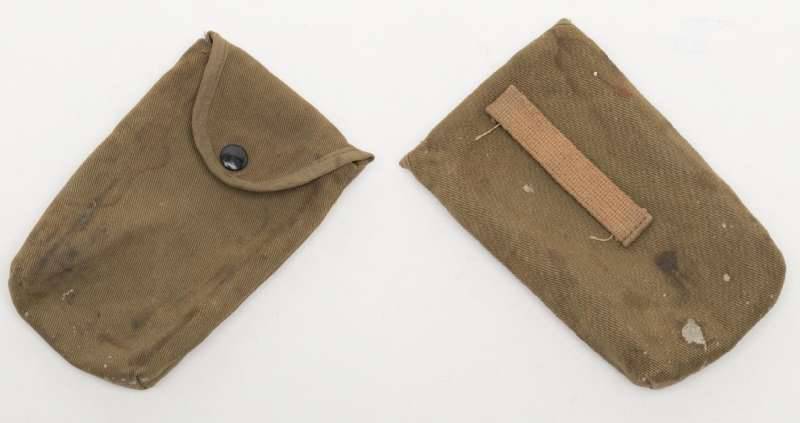 The holster is fastened with a button, a loop is sewn to the back of it, for fastening on a belt. Perhaps in such a holster an army officer carried a pistol, using it as a backup weapon. 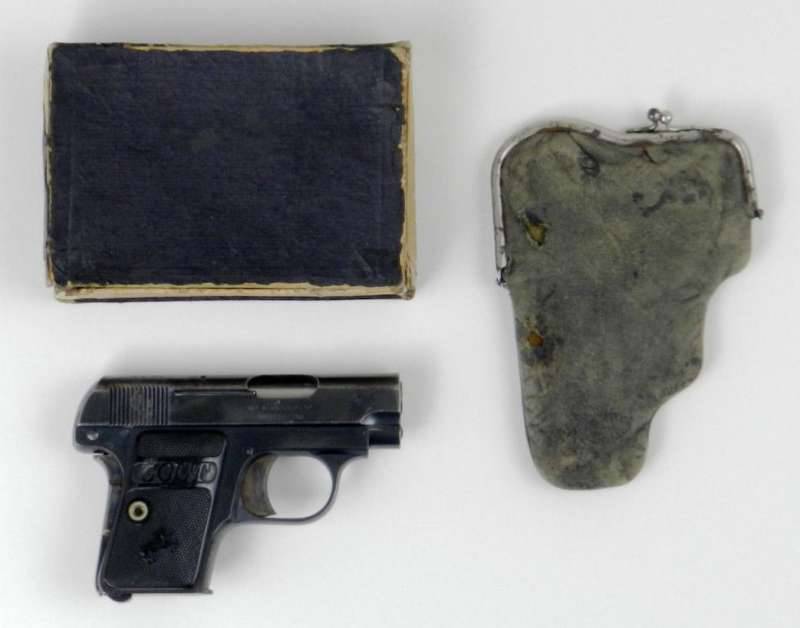 And yet most often the Colt Model 1908 pistols of the year are equipped with a holster in the form of an old wallet. 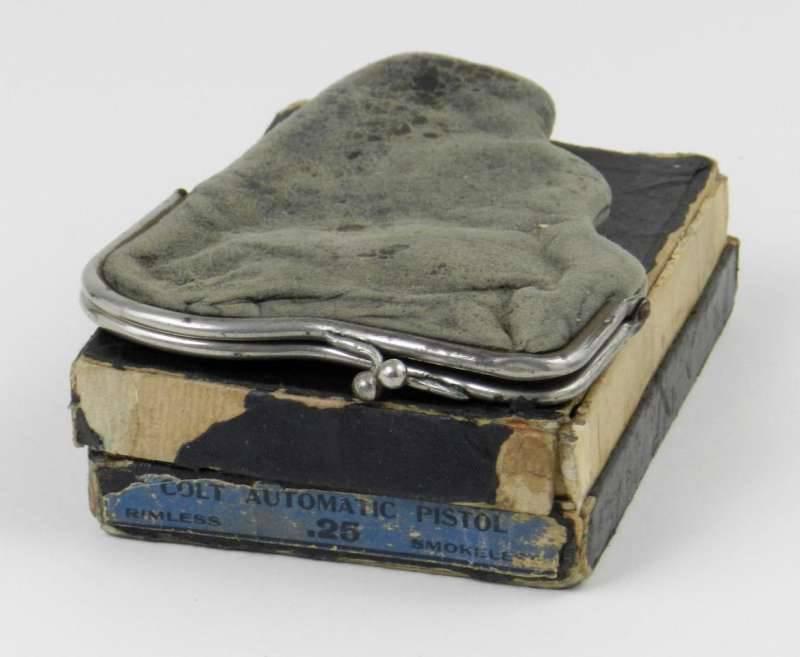 There is no information that the Colt company produced such holsters or entered into a contract for their production. This holster is not an original accessory, which usually comes with a gun. However, in one of the commercial catalogs for 1911, it was stated that owners of pistols can buy such weapons for their holders if they wish. 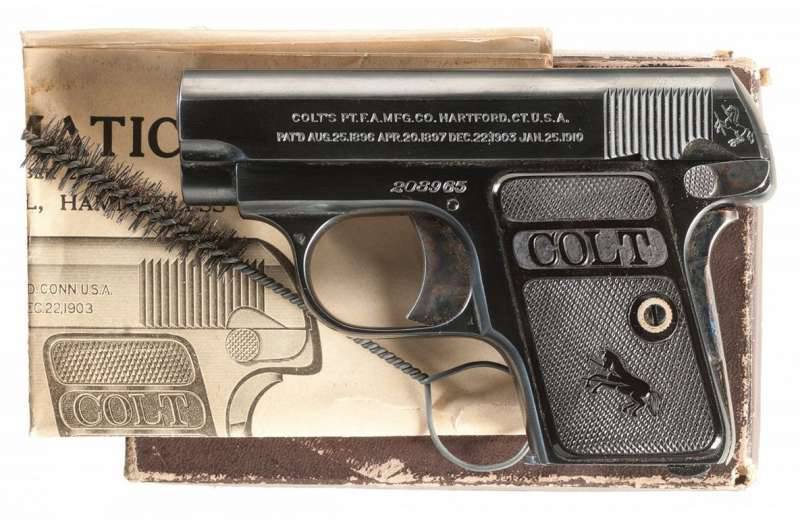 The Colt Pistol Model 1908 of the year at gun auctions is commonly called the Colt Model 1908 Hammerless. A pistol is considered a classic of civil defense weapons. Despite this, the police, detectives and the military use it as a spare weapon. This is a very high-quality and reliable weapon. Some American weapon researchers even claim that the Colt 1908 is better in workmanship than the FN pistol. Probably this statement is only a manifestation of patriotism. Fabrique Nationale is well-known all over the world because of its very high production standards.

In 1935, the retail price of a Colt Model 1908 pistol was 17 dollars. At gun auctions at the present time, the price of ordinary execution pistols ranges from 300 to 800 dollars.