The project of a medium tank Krupp VK 2801 (Germany)

19 May 2016
14
In 1942, Daimler-Benz, as an initiative, developed the VK 2801 heavy reconnaissance tank. This project was based on the basic decisions of the previous VK 1602 and was intended to solve the same problems. By the beginning of 1943, the military had become familiar with the offer of the company and did not approve it. Due to the specific characteristics of the proposed tank did not suit the potential customer, which led to the closure of the project. Soon, however, the German army again initiated the development of a project with the designation VK 2801, however this time it was a completely different car.


According to reports, in June 1943 the army issued new requirements for the next promising project tank. This time, it was proposed to develop a project of a “universal medium tank” that could enter the army and replace the equipment of a number of modifications of the Pz.Kpfw.III and Pz.Kpfw.IV families. Due to a number of innovations, the promising tank was to differ from its predecessors in increased characteristics. In addition, a positive consequence of the new project was to be a large degree of unification of equipment in the troops. Finally, in the future, the chassis of the new tank was planned to be used in the development of armored vehicles of other classes.

The development of a promising tank was entrusted to Krupp, which had extensive experience in creating armored vehicles of various classes. The project received the designation VK 2801. The name VK 2801 (K) is also sometimes used, which allows you to identify a developer company and distinguish a project from VK 2801 (DB), created by Daimler-Benz. The reasons for using the already used name are unknown, but later it led to some confusion. The lack of information about the two projects often leads to the confusion of data on these tanks with the formation, to put it mildly, of an unreliable picture. Nevertheless, even the available volume of data allows us to present the tank's appearance, proposed by Krupp engineers.

One of the options for the reconstruction of the tank VK 2801 (K). Figure Aviarmor.net

According to reports, in the VK 2801 project it was planned to use some of the developments that the creators had, and also to apply the experience of previous projects, including VK 2801 from Daimler-Benz. In particular, this affected the design of the hull and the location of its armor plate. In addition, the tank was supposed to get a classic layout for German armored vehicles. Armament with related equipment was planned to borrow from one of the existing tanks.

There is information about the widespread use of rational booking angles with the installation of armor plates at different angles to the vertical. In this case, the tank should have a sloping frontal sheet with a thickness of 50 mm. 30-mm bead also proposed to mount with a slope inward. Feed protection was to be provided with a sheet 30 mm thick. Some materials indicate that the VK 2801 (K) hull was supposed to receive a stern leaf piled back and increasing the available volumes inside the hull.

The layout of the promising tank should not be different from other German technology of the time. In front of the case were placed the transmission compartment and the control compartment. The middle compartment of the corps was supposed to contain a fighting compartment with a tower and armament, and the feed was allocated for power plant units.

As a basis for the power plant, it was proposed to use the Argus 12LD 330H carburetor engine with a power of 550 hp. Through the drive shaft, passing under the floor of the crew compartment, it had to be connected to the Olvar 55 11 17 transmission, transmitting torque to the front wheels.

Information about the proposed design of the chassis differ in different sources. Some mention the use of six road wheels with individual suspension on each side. Due to the use of relatively small rollers with a diameter of 700 mm, the chassis should have been equipped with three support rollers. In front of the hull were placed the driving wheels, in the stern - guides. In this case, the drive and guide wheels should have been borrowed from one of the later modifications of the tank Pz.Kpfw.IV. The track was supposed to be assembled from tracks 600 mm wide.

There is also information about the use of six large road wheels located in staggered order. However, this version of the tank undercarriage does not seem to correspond to the project that actually existed. Due to the lack of information about the VK 2801 project, a large number of assumptions and outright speculations appeared at one time. There is reason to believe that the version of such a tank with a chess suspension is a later incorrect reconstruction or simply an invention.

It is known about the plans of the company-developer to use the existing tower with weapons in the new project. Tank VK 2801 (K) was supposed to get the tower from Pz.Kpfw.IV with the appropriate set of weapons and additional equipment. When using aggregates of later modifications of such a tank, the turret protection should consist of sheets 50 (forehead), 30 (sides) and 18 (roof) mm thick. Thus, the level of protection of the existing tower, with some reservations, had to match the parameters of the new building.

The basic one weapons The prospective tank was supposed to be an 75-mm rifled gun of one of the existing types. According to some reports, when borrowing a finished tower VK 2801 was supposed to be the carrier of the 7,5 cm KwK 40 gun. With a caliber of 75 mm and a barrel length of 48 caliber, such a gun could accelerate an armor-piercing projectile to 990 m / s and from the distance 100 m punch through to 143 mm homogeneous armor. On 1 km, armor penetration was 77 mm. Also in the ammunition KwK 40 guns could include high-explosive and cumulative shells.

At least one rifle-caliber machine gun, placed in the same installation with the gun, was considered as an additional weapon. Also, like some other German tanks, VK 2801 could get a machine gun installation in the front hull sheet, controlled by a radio operator.

The crew, apparently, was to consist of four or five people. In this case, the driver or the driver and the radio operator should have been located in the control room. The places of the commander, gunner and loader were to be placed in the tower. For access to their seats, the crew could use a set of hatches. 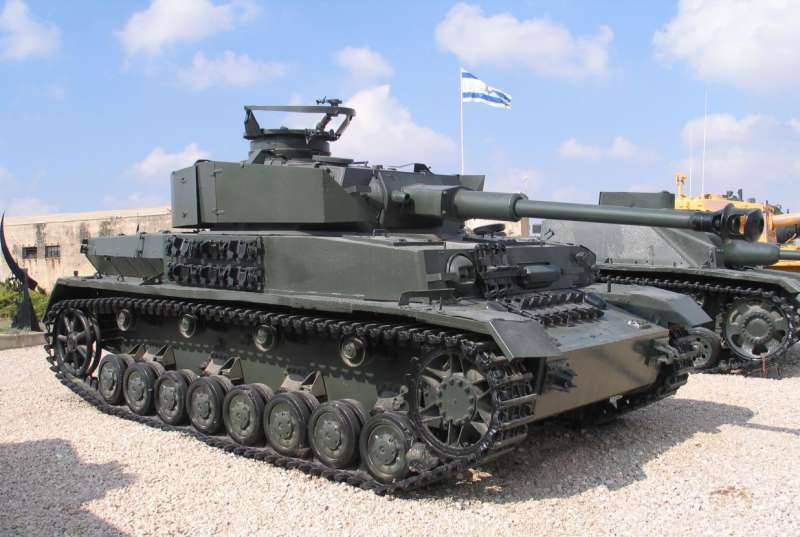 Museum tank Pz.Kpfw.IV, which was supposed to "share" with VK 2801 tower and weaponry. Photo of Wikimedia Commons

In terms of its dimensions, the VK 2801 (K) tank had to comply with other types of equipment. With a length of no more than 6,5 m, a width of up to 3 m and a height of about 2,5-2,8 m, the new machine should weigh about 30 t. With a power density at the level of 18,3 hp per ton it was possible to ensure the mobility of the machine is not worse than that of existing and developed tanks of a similar class.

From the set of characteristics, the promising "universal medium tank" Krupp VK 2801 could be a very successful replacement for the existing Pz.Kpfw.III and Pz.Kpfw.IV of all modifications. Due to the use of ready-made components and new units, it was possible to maintain certain characteristics at the same level, as well as to provide a certain advantage in other parameters. Thus, during the design of a new tank was of great interest to the customer and could go to mass production.

However, as often happened with promising projects of the time, the development of the VK 2801 tank was stopped. Work on this project continued for some time, but eventually ceased due to changes in customer requirements. According to the results of the operation of the equipment at the front and the study of promising projects, a decision was made on a new path of development of armored vehicles. The result of all these studies was the formation of the concept of Entwicklung. Soon, in the framework of the new program, the design of tanks and other equipment of the so-called began. E-series.

Due to the start of the development program for armored vehicles, the VK project 2801 (K), as well as many other projects of that time, was closed. With all its advantages, the tank created by Krupp did not fully meet the requirements for advanced technology. New projects of the E-series, in turn, were to become a full-fledged qualitative breakthrough. In connection with the appearance of new plans, the completion of the projects already started was not considered necessary.

The development of the Krupp VK 2801 tank stopped at one of the design stages and was not completed. For this reason, in particular, the exact appearance of the proposed tank has not yet been established, and some features of its design may be the cause of disputes. In addition, this situation has contributed to the appearance of several versions of the appearance of the armored vehicle, which sometimes contradict each other, and can also be suspected of a mismatch of reality. 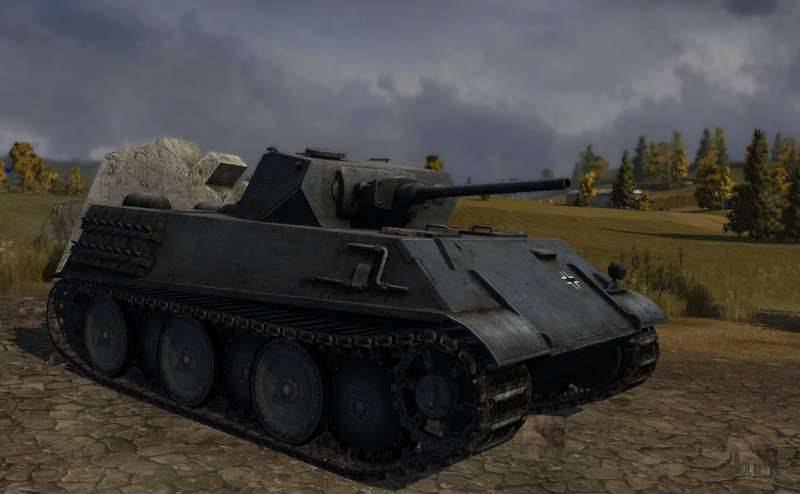 The "game" version of the Krupp VK 2801 tank with a freelance gun. Screenshot Mirtankov.su

An additional reason for disputes regarding the true look of VK 2801 (K) was the appearance of this tank in one of the popular computer games. The authors of the latter connected in a single virtual armored vehicle the features of all known versions of the “universal medium tank”, and also added some elements borrowed from the VK 2801 project from the Daimler-Benz company. Finally, one of the most important elements of the game is the possibility of improving the technology through the use of various component parts of several types, which was not foreseen by any of the VK 2801 projects from two developers.

In the long run, the chassis of the medium tank VK 2801 (K) could become the basis for several new combat vehicles. It was planned to install on the existing chassis new weapons, which could lead to the emergence of self-propelled artillery guns, self-propelled anti-aircraft installations, etc. Stopping the main project did not allow starting the full development of the rest of the equipment. In the case of the planned ZSU, SAU, etc. not even the main features of their appearance were identified.

The development of the "universal" tank Krupp VK 2801 was ordered in the middle of 1943 and continued until the beginning of the 44. By this time, the German command had changed its views on the further development of armored vehicles, which led to the abandonment of a number of promising projects. VK 2801 (K) also fell under the name of others. Due to the relatively early closure of this project, an armored vehicle of a new type did not have time to go to the test and demonstrate its qualities. Naturally, there is no reason to speak of any influence on the course of the war. As a result, this project is of interest only in the context of stories development of German development tanks.