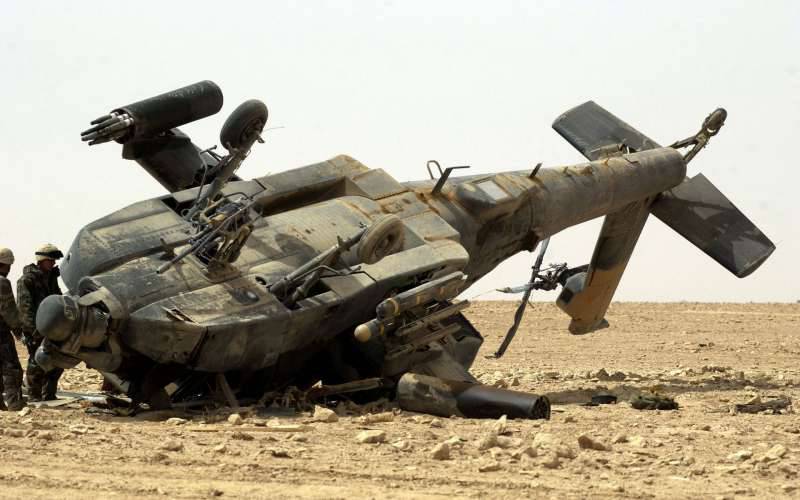 Over the past few years, generals - members of the Joint Chiefs of Staff have painted a bleak picture of the state of the armed forces in front of US lawmakers and society.

"... The degree of combat readiness of the army has degraded to the lowest level in the last 20 years" - this was how the four-star General Ray Odierno, Chief of the Army Staff, Commander-in-Chief of the Land Forces of the United States, clearly defined the situation in the military, reporting to the Senate Committee on Armed Forces January 2015 of the year.

Reporting a year later, the successor to Odierno, General Mark Millie further tightened his assessment. “The army today is not ready to use large forces and formations ...” he said, answering a question about the prospects of the United States in a theoretical conflict with Russia, China, Iran or North Korea.

“... We have a lot of units and formations that are in a low stage of combat readiness ...” - explained Milli, stressing that combat-ready units — equipped with a sufficient number of personnel, serviceable equipment, and appropriate training facilities — are several times lagging behind conservation units.

Admirals report that on fleets - the same picture. The US Navy has a growing backlog of routine ship maintenance. Today, the volume of current maintenance repairs is 57% of what is required according to technological maps. A recent report cited the example of a naval aviation wing, whose F / A-18 Hornet did not receive spare parts for 18 months, and commanders, in order to ensure at least some part of the aircraft for readiness for flight, in violation of all instructions and rules, transferred units from one plane to another.

Air Force generals report that only half of the fighter pilots, including elite units equipped with the most advanced F-22 Raptor, receive the full range of necessary training. Expensive to fly. Moreover, the Raptors pilots have even lower practical experience than the average combat aviation, - for the same reason, replacing practical flights with "primitive lessons on simulators." In total, the Air Force command completely "grounded" - transferred to the conservation mode, without flights - more than thirty squadrons.

The generals of the Marine Corps say the same thing. Joseph Dunford, chairman of the JSS and the general of the marines himself, agreed with the conclusion made by Mac Thornberry, chairman of the committee on the armed forces of the House of Representatives: “... We have extremely low preparedness across the whole range of tasks, especially for special operations that [the corps Marine Corps].

In order to understand how this could happen, you need to look carefully at the political and doctrinal support for military construction in the United States.

The US military has been caught in a maelstrom of reform, which has been brewing for decades, from the mid-1980s.

Disruptive reforms reached hurricane power in the reign of President Barack Obama, four times the Minister of Defense. In the end, when, after the resignation of Chuck Hagel, the White House’s inability to persuade at least someone to lead the Pentagon, became the political anecdote of the season in local publications, Obama settled on Ashe Carter, a man who did not wear a military uniform for a single day and whose experience in military construction was limited a short period of civilian office at the Pentagon during the reign of Bill Clinton twenty years ago.

The engine of this reform was the Budget Control Act of 2011 of the Year, the result of a bipartisan agreement between an extremely liberal democratic White House and a conservative Republican majority in the House of Representatives.

The Republicans did not intend to destroy the army - their task was to protect Barack Obama’s insane social spending, like the Obamakea, or the free higher education project at low-profile provincial colleges. But the nuts on the budget had to be tightened around the perimeter, the White House would not allow to separate the armed forces with a separate line - for him this would mean a political defeat.

The law, which currently forms the fourth out of ten budgets that are included in its duration, is moving toward reducing total defense spending by about 20% of what was planned in the draft budget for the year 2011 - about a total of $ 1,5 trillion.

The maximum sequestration occurred in 2013, when, due to a confrontation between the White House and Congress, which resulted in the absence of the current state budget for the United States, the most radical provisions of the adopted law automatically entered into force.

All the generals and admirals in the world are the same. If they are required to save - this is not a reason to reduce the number of subordinates, especially since it is the formal list staff that creates the general's posts. As a result, for example, at some point only 10% from more than forty formally existing brigades of ground forces of the army were fully staffed.

The position of the generals led also to the fact that the largest reduction fell on the core of army professionals - junior and middle officers. The generals did not intend to cut themselves, but the soldiers and sergeants formed the basis for the preservation of the general's posts.

According to a report by congressional experts, the armed forces “succeeded” in reducing 30% of the captains who joined the army during the campaigns in Iraq.

No less "sequesters" were waiting for the US defense strategy. This was the second destructive reform - plunged the military construction of America into a deep crisis.

First of all, the White House rewrote defense policy goals. The focus was on the task of “restoring the balance” in the Pacific - to prevent Russia from returning its position in the waters of Asia and off the coast of the United States and to stop the advancement of China’s military infrastructure in the southern seas.

Since the end of the Cold War, the previous administrations of both sides have assumed that, as the main world power, the United States should have been ready to wage two major regional wars simultaneously. By announcing his departure from the Middle East and calling Europe a region of "eternal peace", the White House was able to significantly lower the bar of military sufficiency.

However, in 2012, there was still no military conflict in the Donbass, a break in relations between NATO and Russia. The “Islamic State” did not exist yet and the Syrian war did not go on.

In other words, the geopolitical realities forced even the slow Obama administration to redeploy forces, while it retained - under the Budget Control Act of 2011 - all plans to reduce military spending. There was a severe imbalance between the strategic goals of military doctrine and the real military presence card.

Perhaps the most notable manifestation of this problem is the emptiness of “rebalancing” in the Pacific.

The combination of a reduction in the fleet and unforeseen commitments elsewhere in the oceans (primarily in the Mediterranean and in the Persian Gulf) led to the fact that the fleet was not sufficiently present in the western Pacific, and especially in the South China Sea. In the four years since the day when the “balancing strategy” was announced, the US Navy was not able to have two aircraft carriers in this ocean theater for even one month.

In April, US Secretary of Defense Ashton Carter told national television stations in front of the cameras when the aircraft carrier "Stennits" was sailing through the South China Sea: "... We have been here [in Asia] for decades ... and will remain for decades ..." The John Stennits case was in the South China Sea for just a week - he participated in the support of the Great Green Fleet program, in which the US Navy reports to the public about its victories ... over global warming.

The same happens in other theaters.

In the first two years of his presidency, Barack Obama reduced the planned purchases of the fleet of fifth-generation fighter F-22 Raptor to 187 aircraft instead of the 750 aircraft originally planned. As a result, in response to the Russian operation of videoconferencing in Syria, the Americans had to transfer the Raptors from Alaska, removing them from the position of patrolling the "priority" Pacific Ocean to the Middle East.

The navy consisted approximately of 500 ships; today he is on his way to the ship's planned 282 digit. Today, aircraft carriers in the Arabian Sea are charged with providing direct aviation support for remote combat outposts in Afghanistan, but the price and complexity of such operations is enormous, and the flight time leaves ground units for a long time without any cover at all.

The same picture in aviation: in the Air Force there were 26 tactical fighter aircraft wings on 70 aircraft in each - 14 wings on 50 aircraft were planned.

It is unlikely that Russia should be lamenting that the US military potential is melting. But this is only if the policy of the new administration of the White House will be the refusal of the "export of democracy" and the position of the "world gendarme".

If interventionalism — political and inevitably the military behind it — remains the dominant ideology, then the growing inability of the United States to maintain the status of a “world military superpower” may cause serious new risks for Russia.

If you notice an error in the text, select it and press Ctrl + Enter to send the information to the editor.

Ctrl Enter
Noticed oshЫbku Highlight text and press. Ctrl + Enter
We are
If not for the generals ... Shameful history of the Ukrainian armyMilitary reform as an integral part of the security concept of the Russian Federation: Systematic dynamic assessment
Military Reviewin Yandex News
Military Reviewin Google News
162 comments
Information
Dear reader, to leave comments on the publication, you must sign in.