Turkey is not lucky with the Sultan

17 May 2016
25
The media write that Erdogan allegedly "put Europe in the position." They also write that the neosultan turned to NATO for military support in order to prevent the transformation of the Black Sea into a “Russian lake”. All these loud statements by the Turkish president, of course, bravado. Speaking of external, Erdogan hides the internal. Turkey has a bad business: its economy has cracked and begins to fall apart. 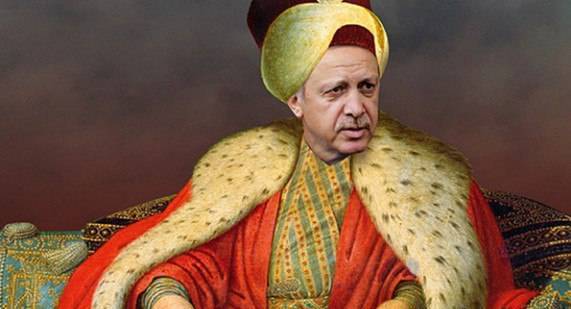 Apparently, fearing alone “pushing” the Russians on the Black Sea, the Turkish neosultan decided to resort to the help of NATO.

At a meeting of chiefs of staff of the Balkan states, Recep Tayyip Erdogan called on the North Atlantic Alliance to strengthen its presence in the Black Sea. Otherwise, it can turn into a “Russian lake”.

Sultan explained to the somewhat puzzled assembled that this topic was not really new, it had previously been discussed by him (Erdogan) with NATO Secretary General Stoltenberg. Sultan explained to him that NATO seemed not to exist in the Black Sea, and therefore it "became a Russian lake." Erdogan urged NATO to "take action", otherwise "история we will not forgive this. "

Do we really add that Erdogan really counts on the “historical” help of NATO? Stoltenberg will not defend Turkey’s ghostly interests in the Black Sea at all, risking embroiling the alliance into a confrontation with Russia. The ambitious and self-righteous Erdogan has already spoiled relations not only with Russia, but also with the West, constantly blackmailing Europe with refugee flows and demanding money. The press writes that the sultan, who “almost achieved” visa-free entry to the EU for the Turks, “put Europe in a position”. However, is this really the case?

The angry sultan really put forward an ultimatum to the EU, which he has to formally abide by.

On Wednesday last week, European experts began to legislate a visa-free regime for the EU with Turkey. The abolition of visas is part of the March Agreement on Refugees concluded between Ankara and Brussels.

The European Union simply pays for Turkey, which is frankly blackmailing it with refugees, said Vladimir Sazhin, an expert at the Institute of Oriental Studies of the Russian Academy of Sciences. “Turkish President Recep Erdogan had the opportunity to speak with the European Union from a position of strength, because he holds the key from hundreds of thousands of refugees not only from Syria, but also from other countries, right up to Afghanistan. And Erdogan gladly used the trump card that fell into his hands from the sky, ”said Sazhin Reedus.

Ankara was unable to enter the EU through the front door, and now it puts Europe in a known position. “Ankara is now literally praying that the conflict in the Middle East, Allah, may not stop, before the EU agrees on all the paper procedures necessary to remove the border formalities for Turkish citizens,” the expert said.

And nevertheless, the beginning of formal procedures is not a reason for a holiday.

On the same Wednesday, the European Parliament suspended the discussion of the dossier on granting Turkey a visa-free regime, since Ankara should first comply with all EU requirements without exception.

In addition, the decision on a visa-free regime for Turkey in the European Union will be taken together. Everyone remembers the Netherlands’s recent objection to the relevant Ukrainian issue.

In the German newspaper «Die Welt» An article with a remarkable headline “Das ist die große Schwäche des“ Königs von Europa ”by Nando Sommerfeldt and Holger Shepetz (Nando Sommerfeldt, Holger Zschäpitz) was published. We are talking about the "big hole" for the "King of Europe".

Erdogan may now seem invulnerable, but this is not so: Turkey has a big economic problem. Well, yes, Angela Merkel is at the mercy of the Turkish president on the issue of refugees, and the European Union may be forced to grant him visa-free travel for all Turks. Prime Minister Davutoglu, who, at least in part, did not agree with Erdogan, freed the post. Erdogan does not tremble even before Putin - “like everyone else.” So what, was the "new king of Europe"?

Nothing like this! In the midst of his political triumph, Erdogan may fail. Turkey’s true weakness is that its economy is vulnerable, say the authors.

Turkey is very dependent on a constant inflow of foreign currency, because it needs significant energy supplies, as well as other foreign products. One of the stable sources of obtaining currency, as well as employment in the country, was formerly tourism. Yes, it is only six percent of the gross domestic product, but it provides jobs for more than eight percent of the Turks and is an important source of foreign currency. And here Erdogan “broke off abruptly,” journalists write.

The prosperity of tourism has been hindered by the growing threat of terrorism and the policy of too high Erdogan. The number of foreign tourists is decreasing considerably every month. In March, tourists were almost 13% less than in the same month a year ago. The reduction of their number is the eighth month in a row. There has been a sharp drop in the number of tourists in almost ten years.

The main reason is the boycott of tourism to Turkey in the two most important countries for Ankara, namely Russia and Germany. Germans and Russians made the most of the profits in this industry. The Russians and Germans, in essence, made a holiday in a Turkish street. Now it's over. In March of this year, all 24.000 guests came from Russia; compared with the previous year, the reduction was 60 percent!

After the Russian plane was shot down by Turkish forces at the end of November last year, the Kremlin immediately imposed sanctions against Turkey, and the Foreign Ministry then issued a special warning to travelers. Soon after, Russian travel agencies stopped offering tours to Turkey. And charter flights to the Turkish coast of the Mediterranean were also canceled.

The Germans (about 5,5 million trips to Turkey last year) are now skeptical about the idea of ​​visiting the Turks. They find this country unsafe and are waiting for political tensions, violent clashes, and terrorist acts. German tour operators have shifted to other countries.

Timothy Ash, head of emerging markets at the Japanese bank Nomura, notes that financial markets look very closely at the number of tourists, since tourism is one of the main sectors of the Turkish economy.

The decline in tourism beats on airlines. The state airline Turkish Airlines reported last week about the biggest quarterly loss since 1999 of the year. One of the main reasons for reducing losses is the low utilization rate of aircraft: the average load factor fell below 75%. And, probably, it will only get worse as the airline has planned to expand its capacity earlier this summer (by 14%).

The tourism index on the Istanbul Stock Exchange has lost six percent in value terms since mid-April.

The unexpected resignation of Prime Minister Davutoglu also shook the markets. Turkish lira lost over 5,5% of its value in May against the dollar in May, while the euro lost five percent against the euro.

Analysts of the American investment bank JP Morgan are already talking about a reduction in investment in Turkey due to political risks. Experts recommend that global investors free their portfolios from Turkish investments.

The World Bank recently gave a negative assessment of the growth prospects of Turkey - precisely because of failures in the tourism industry.

Finally, Turkey today turned out to be one of the few countries in the world in which currency reserves fell below a critical level (according to the IMF methodology).

“Therefore, the big question is how long Erdogan can afford a big show,” the correspondents conclude.

R.T. Erdogan, by the way, has a certain number of political opponents. It cannot be said that “neosultan” has absolute power in the country. Before rewriting the Turkish constitution, oh, how far.

Empty hotels will not add to the popularity of Erdogan and among the people.

Sooner or later, a “spring” will break out in Turkey, supported by the European Union, as a result of which an Islamist, inclined to sultanism and prone to delusions of grandeur, will be deposed. Brussels, which is not configured to provide the Turks with a visa-free regime, would have a good spring. Yes, and the United States would support it: they are tired of the unpredictable "Sultan".

As for Erdogan’s insane statements about the “Russian lake” and the “help” of NATO, the president’s hopes did not come true. From this frenzy shy already in NATO.

Observed and commented on Oleg Chuvakin
- especially for topwar.ru
Ctrl Enter
Noticed oshЫbku Highlight text and press. Ctrl + Enter
We are
The attack on the Russian aircraft and the political situation in TurkeyResults of the week "I do not need a Turkish coast"
Military Reviewin Yandex News
Military Reviewin Google News
25 comments
Information
Dear reader, to leave comments on the publication, you must sign in.