The semi-submerged "transport strategist" of the Middle Kingdom: how the Americans ran into the "Guan Hua Kou" 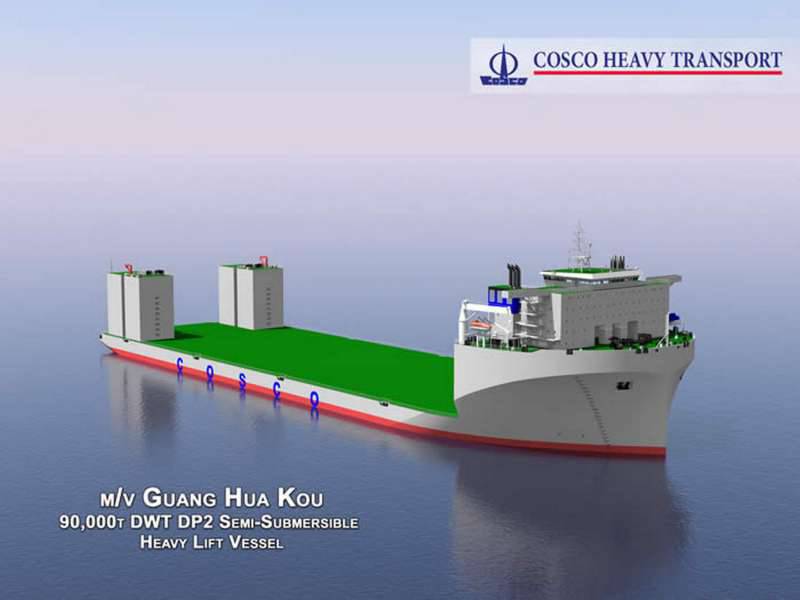 The largest Chinese semi-submersible landing craft platform ship "Guang Hua Kou." The 68-meter wide deck allows you to take large loads, for example, a large oil platform, up to 3 ships of the "frigate" or "destroyer" class onto the platform. The “gate” (the space between the rear mooring superstructures) allows to increase the length of the payload (with a width of up to 35,7 m) to 208,4 m, i.e. transport can transport ships of the cruiser or helicopter carrier classes. Semi-submersible transports of this class will be able to support connections fleet China absolutely anywhere in the oceans, which opens the first stage of the global presence of China in the "Big Game"

When the military command of a developed state with the status of a regional superpower talks about conducting a strategic military operation using its own fleet, or about the participation of its naval forces in the naval coalition grouping, the question immediately arises of the autonomy indicators of the naval formation, also its combat stability, which depends on a great many factors of this most complex floating "organism": from the performance characteristics and network-centric abilities of shipboard BIUS to properly calculated arsenes s missile / torpedo / artillery weapons, logistics and food supplies of fresh water. The calculation should be based on the enemy’s predetermined shock and defensive potentials, as well as the remoteness of the theater of military operations from its own and friendly air bases and naval bases. Often, all the resources of a naval or carrier strike group prepared for a military operation correspond to or exceed the means at the disposal of the enemy, but often there are exceptions that require a better technological level of their own naval air defense missile systems, PKRC, PLUR, etc. This option is valid for the hypothetical opposition of Russia with NATO. The presence of a sufficient number of support ships, rescue ships, special purpose ships, mine-sweeping ships, hospital ships, or the implementation of these functions in ships of the main classes is very important for AUG and KUG.

The displacement of support and special-purpose vessels is also of great importance for autonomy, among which semi-submerged sea transports / landing platforms / dry docks capable of carrying repair, food and armory connection base for tens of thousands of kilometers, transfer landing units (dozens of high-speed boats with infantry, patrol boats, hovercraft), take on board the ships of the “corvette”, “SK”, and “frigate” classes for sea speed elimination of malfunctions associated with damage to the hull below the current waterline, or on movers and steering elements located on the baller. Of course, the type of ships to be lifted depends on the displacement of a semi-submerged ship.

Thus, the Dutch semi-submerged cargo ships MV “Blue Marlin” and its sistership MV “Black Marlin” managed to distinguish themselves with a worthy number of unique cargo traffic; especially the first. In 2000, he delivered the destroyer DDG-67 USS Cole, destroyed by explosives, with an Al Qaeda inflatable motor boat in the port of Aden, in Pascagulu, USA; The displacement of the Cole is about 8500 tons, the length of 153,92 m, which required the diagonal placement of the destroyer relative to the 157,2 meter deck of the transport dock (taking into account the mooring equipment). In the 2007 year, he delivered a naval floating multifunctional radar anti-ship missile system and highlight SBX-1 from Pearl Harbor to Alaska. But these vessels are commercial, and now consider the military options.

USNS Montford Point (T-MLP-1), a US semi-submerged transport vessel, often referred to in the US Navy as a Mobile Landing Platform (MLP, Mobile Landing Platform), despite the displacement of 78000 tons and length in 233 m (with 50 width m) , capable of carrying up to 600 tons of cargo and up to 320 infantrymen. On deck, there are up to two berths for LCAC amphibious hovercraft. Each 185 ton hovercraft can carry 1 MBT M1A2 SEP, up to 3 amphibians of KMP USA AAV-7, up to 5 155-mm M-777 howitzers, or up to 180 infantry; The T-MLP-1 is capable of transporting any type of shock transport helicopter and convertible V-22 "Osprey". Montford Point can deliver these vehicles over a distance of up to 9000 miles, plus hundreds of thousands of liters of fresh water and diesel, but the 600 ton load raises some doubts about the repair and recovery capabilities for other types of small and medium displacement warships.

Another thing is a Chinese semi-submerged cargo ship / landing platform "Guang Hua Kou", which was launched at the shipyard "Guangzhou Shipyard International" 28 on April 2016 of the year. Here it is immediately evident that the US Navy’s Spratly archipelago in the South China Sea “reloaded and monitored”. Compared to what we saw from photo reports from Guangzhou, Montford Point looks like a “moderate middling”. “Guang Hua Kou” has just a huge “carrier-based” displacement - in 98 thousand tons. According to preliminary estimates, the length of the deck is 177 m, width is 68 m, which corresponds to the Dutch “heavy cargo”, the length of the entire ship is about 245 m; with a slightly longer length, the Chinese ship is much more load-bearing, capable of working with frigate / destroyer class ships, as well as transporting large quantities of weapons for shipboard strike forces. 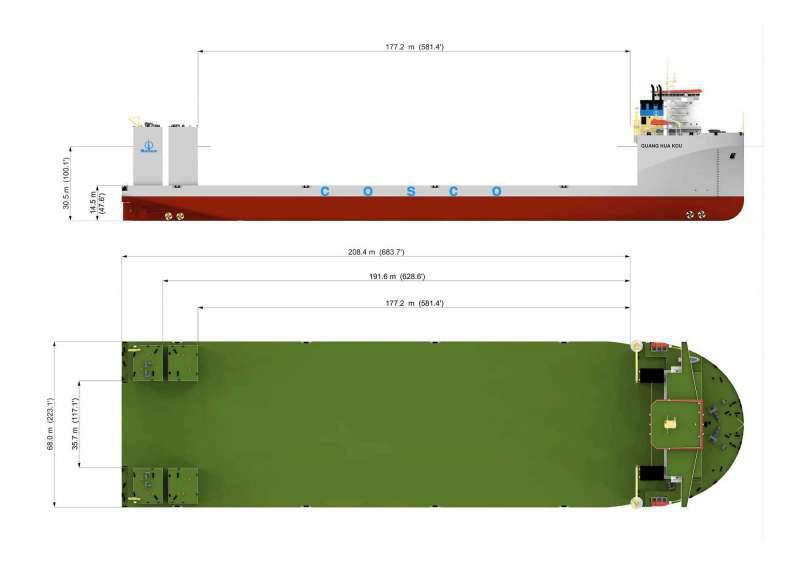 Before the advent of Guan Hua Kou, the US and NATO naval forces were the only owners of this type of ships, but now the situation is changing dramatically. The Guangzhou shipyard is planning to launch far more than one semi-submersible dock of this class, as indicated by the pace of the emergence of new projects of surface warships of the Chinese Navy, as well as the available equipment, along with China's ambitions in the Indian Ocean and the APR. Without hesitation for a long time, I can accurately assume that the range of this powerful dock will exceed 12 thousand miles. This will allow the future Chinese KUG and AUG to feel very confident up to the ocean approaches to the Atlantic Ocean or Alaska; in the case of support by our submarine component and icebreaker fleet, the Chinese fleet will be able to participate in the “Arctic race”, especially since there are already prerequisites for this.

So, the Chinese Shanghai Research Center of the Polar Regions has been working hard for 27 for years to study the polar regions of our planet, their flora, fauna, and also natural resources. Initially, emphasis was placed on the Antarctic, but due to the emergence of territorial ambitions in Europe and North America on the Arctic shelf, the center also focused on the Arctic.

In particular, China is firmly interested in the huge energy resources located in the Arctic shelf, which, according to the center's report, can be delivered in “fast and convenient ways”. After this, the heavenly Empire actively began to establish trade and economic ties with Iceland and Denmark (the latter being the leading player of the Arctic Race), investing specifically in the mining facilities of Greenland. Quickly forgotten in Beijing and about a convenient southern sea exit to the Antarctic, arguing that the PRC is located in the Northern Hemisphere. In October, the 2015, 3 Chinese Navy warships, namely, the destroyer URO, Type 052C “Jinan” (152 board), missile frigate Type 054 “Yiyan” (548 board), and the support vessel “Qyangdangu”, after the anti-piracy operation in Aden Gulf, sent on a visit to the ports of the northern states of Europe - Denmark, Sweden and Finland. This entry was not accidental. First, the Chinese sailors checked and at the same time demonstrated the nautical qualities and endurance of their modern fleet ships in the conditions of northern latitudes and unusual meteorological conditions. Secondly, China showed interest in the North Atlantic, where the strategically important sea routes of countries participating in the “Arctic Race” intersect, everything is very significant. Very neatly, “on official duty”, the Chinese, for a moment, probe the “ground” on which, perhaps, in the foreseeable future, they will have to act in the North Atlantic theater of operations, and the submersible guided hulls of the “Guan Hua Kou” class will become indispensable helpers in these activities.