The fate of "Watch" 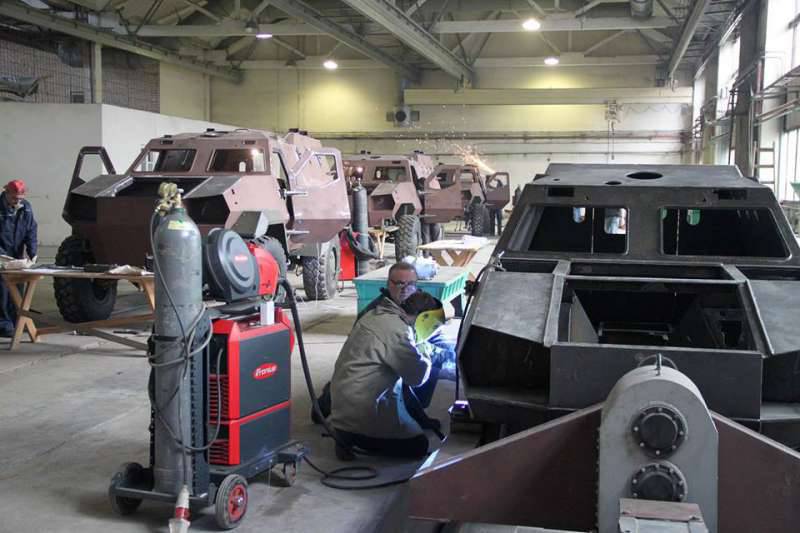 Not so long ago, information appeared in the press that the Ministry of Defense of Ukraine was considering the possibility of suspending the adoption of the tactical wheeled vehicle Dozor-B by the Ukrainian army. Such a decision can be made in connection with a number of problems that have become known in the process of preparing for the transfer of the first batch of “Dozorov”. Recall that a contract was signed between the military department and the state enterprise Lviv Armored Plant, according to which the transfer of the first batch of vehicles to the armament was to take place no later than April 30 of the current year. But the "Watches" were not transmitted.

The development of a tactical vehicle was begun in 2006 year as an initiative project. Specialists of the state enterprise “A. Morozov Kharkiv Design Bureau of Mechanical Engineering” worked on the project. Despite the fact that it was just a mock-up model, it was repeatedly demonstrated at international and Ukrainian arms exhibitions. However, the Ukrainian military did not show much interest in him.

When hostilities began in the east of Ukraine, and in the armed forces there was a need for a new armored vehicle, the Lviv armored plant was elected as an enterprise that was supposed to start mass production of new technology. When the first prototype of Dozor was ready at the enterprise, the car was sent for state tests that were carried out from August 17 to November 20 2015.

According to the results of these tests, it was announced that the prototype was tested successfully. At the same time, it was stressed that the start of mass production of tactical machines and their adoption by the Armed Forces of Ukraine is possible only after correcting all the shortcomings: both in the documentation and in the machine itself.

Part of the shortcomings was supposed to be corrected by adjusting the design documentation. In particular, we are talking about fixing the replacement of radio stations on Ukrainian "Lybid" and American Harris. In addition, the final document stated that there are discrepancies between the prototype and the requirements of the working documentation. So, on the “Patrol” there are other bridges, other than the ones indicated in the documents, other wheel reducers, heating of side and stern windows, filtering unit and winch of the wrong brand, other radiators are not installed.

By and large, all these differences are insignificant. Since all installed equipment is not worse than indicated by the documents, just different. But at the same time, the military department insisted on full compliance of the working documentation. Part of the changes planned to be introduced after the first series - with the 11 machine.

Another, but more significant difference - the use of Polish steel Armstall 500 instead of the Ukrainian "71" for the manufacture of the machine body. Meanwhile, all calculations regarding the strength of the hull, its bullet and anti-mine resistance were made on the basis of the characteristics of Ukrainian steel.

As of June 2015, a list of differences was compiled that dealt with component materials, in particular, the anti-shatter “tamping” of armored glass and the above-mentioned armor.

“Ukroboronprom” argued the discrepancy of the declared materials by the fact that Ukrainian steel is not being manufactured at the moment, and it is quite problematic to resume its production in small quantities for the first batch of machines. The Ministry of Defense, in turn, demanded that studies of Polish steel be carried out in order to determine the possibilities of its use - the anti-bullet resistance of welds of the structure.

In addition to the above, the discrepancy was in the components for tactical machines. Some units and components were purchased from different suppliers. The leadership of the Lviv enterprise argued this with the realities of the modern market.

All these inconsistencies led to the fact that the representatives of the military department, who were responsible for the quality control of the “Dozorov” assembly, announced the occurrence of certain risks in several areas. In particular, enterprises refuse to supply components, parts, assemblies for machines with quality control and cost verification by military representatives, and in general, the constant change of suppliers makes it impossible to implement quality manufacturing of components.

Tensions between the customer and the machine manufacturer remained until the beginning of the state tests in 2015. Some of the shortcomings were eliminated with the assistance of the Kharkov Engineering Design Bureau. In fact, there was a process of finalizing the equipment to the maximum possible ideal.

In accordance with the contract, the production of the first ten “Dozorov” was to be completed by March 31 of the current year, and the transfer to the customer - by April 30. However, as of April 25, the situation was as follows: Lviv enterprise presented the Dozor tactical vehicles 10 to the military department for testing. But in the course of these tests, the next defects and shortcomings were revealed, which were repeated on several machines at once. In particular, this concerned faults in the braking system, fire-fighting system, steering, control panel, wheel gearboxes, as well as hull cracks in three “Patrols” at once.

In addition, certain requirements of the Ministry of Defense were not met. We are talking about the non-fulfillment of the conditions for ensuring the boundary noise level, poor thermal insulation and ventilation systems to ensure comfortable conditions in the temperature range from –40 to + 50 degrees.

In addition, the causes of cracks on the cases of cars, the mileage of which was only 120-400 km, have not been established, therefore, according to representatives of the Ukrainian MO, it is possible that similar defects may appear on other machines.

Also, some comments related to the fact that the Lviv enterprise installed instead of the combat modules of the production of the Kharkov Tractor Plant stipulated by the contract, the turntables of its own design, which failed to provide the necessary accuracy of fire.

All these shortcomings and shortcomings ultimately led to the fact that on the day of the transfer of the “Dozorov” to the military department the customer decided to temporarily suspend the acceptance of tactical vehicles into service until the causes of defects were detected, prevented and eliminated.

It should also be noted that the “Dozor” model, which was sent to the international arms exhibition, was significantly different from those machines that were ordered for the Ukrainian army. All this raises a lot of questions. So, why in the tactical vehicles provided for the Armed Forces of Ukraine, is not installed a combat module with remote control (unlike the export sample) to ensure firing at 360 degrees? Why are these machines not equipped with thermal imagers? One more question that cannot fail to arise - why, during the state tests, the level of ballistic and mine protection of Dozorov was not checked? Of course, if the cars are transferred to educational institutions for training cadets (this is one of the scenarios), then this characteristic is not so important. But after all, these machines were originally planned to be sent to the combat zone ...

All these questions require immediate answers, which so far cannot or do not want to give either to the military department or to the enterprise. Anyway, it is obvious that it’s still very early to put an end to “Patrols”. Hurry, everything is just beginning.

Today, according to analysts, it is not known whether these machines will go into service with the Ukrainian army, and if they do, then in what status. "Ukroboronprom" assures that even with such inconsistencies "Dozors" fully meet the tactical and technical characteristics, but the military department is not in a hurry to accept the ordered equipment.