Is Mistral needed in our Gulf? 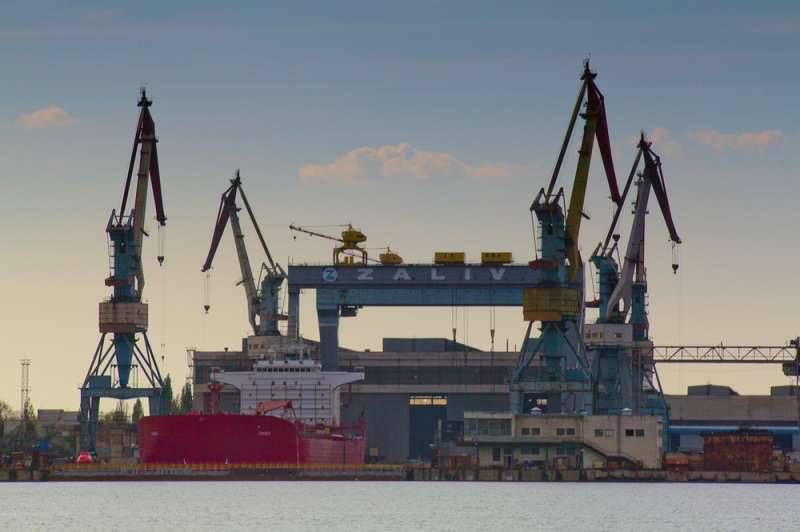 I must say right away that this is not an attempt to figure out yet another seething on the topic of helicopter carriers that are already bored by everyone. This is about the Gulf factory. Actually, we know little about what sailed to us together with the Crimea. And believe me, except for parking for fleet, beaches and vineyards there are many more interesting and useful things. Lots of. And this is worth telling.

Having come across the statement of the Minister of Industrial Policy of Crimea Andriy Vasyuta, I confess, I was surprised.

“Zavod Plant” is a unique enterprise. There is no such shipyard and no such dry dock that exists at the Zaliv plant at any shipyard of the Russian Federation. By and large, the Mistral issue would never have been there if 5 years ago, when orders occurred, there was such a shipyard as the Kerch Zaliv plant.

Surprised, of course, not by the presence of the Minister of Industrial Policy in Crimea, no. And what I read in his interview. After rummaging in addition, I made conclusions, which I decided to share.

I'll start from the factory.

The Zaliv plant exists in the city of Kerch as early as 1938. True, during the war I changed registration to Tyumen and Perm, but after that I returned back to Kerch. A restoration was carried out, after which the plant was engaged in the production of tankers of the type "Crimea" and "Panamax", military frigates and oil platforms. From 1945 to 1980, the plant built and handed over 814 ships and ships to the customer.

In the 70-80 years of the last century, the Gulf reached the peak of its shape with the release of the first large-capacity supertanker Crimea, followed by a whole series of giants of the 1511 project: Kryvbas, Kuban, Kavkaz, Sovetskaya Neft, "Kuban". The displacement of tankers was 180 thousand tons. They are still the largest ships built in the USSR. Well, in Russia, respectively. 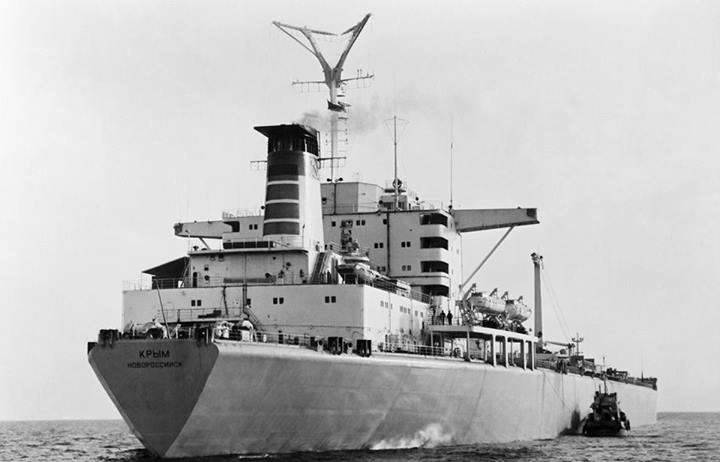 Ships and vessels of smaller size were built. Including "Sevmorput", a unique and the world's first icebreaker-lighter carrier with a nuclear power plant. 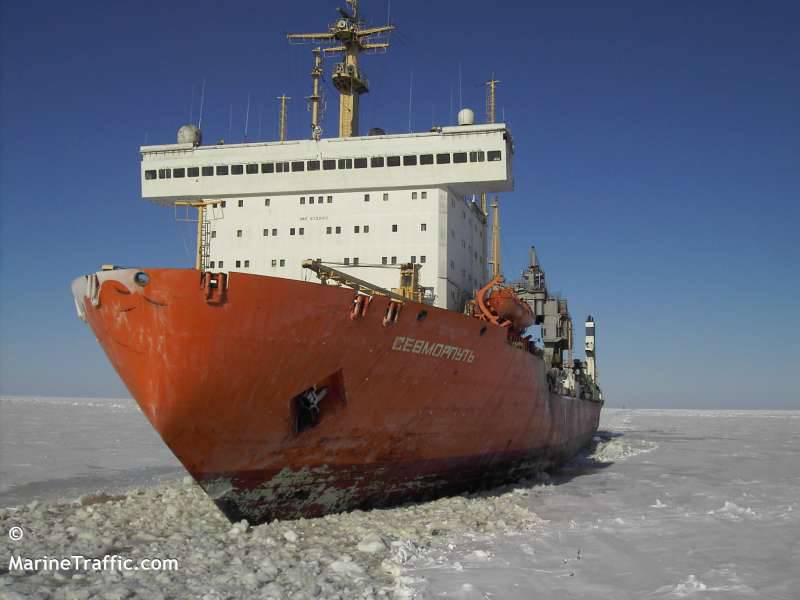 The 1135 "Petrel" project, the most famous of which is the Selfless Brigade patrol ship, which became famous for "popping out" the Yorktown cruiser from our 12-mile zone in February of the 1988 year. Built 7 ships.

11351 project, modification of the same guard for the border service. Built 8 ships. The most famous, perhaps mutated in the frigate "Getman Sahaidachny", the beauty and glory of the Ukrainian fleet.

And then the Soviet past ended, and began a harsh independence. And since 1993 of the year, Zaliv has been exclusively engaged in the production of shells for Dutch companies.

In 2000, the plant was bought by Ukrainian businessman David Zhvania. And the "Gulf" began to rapidly grow smaller. And then all the shares went under the hammer to banks and groups.

A slight improvement occurred in 2006, when the majority of the assets were actually bought by the Ukrainian businessman Konstantin Zhevago from the holding company AvtoKrAZ. The plant began to get out of debt, and even in 2011, the vessel Polarcus Adira was built by order of the Norwegian company Ulstein.

And then a well-known event happened ... And AvtoKrAZ Holding lost its plant. The Gulf swam away ... both geographically and economically.

The official site of the plant talks about the raider seizure of the plant by a certain LLC “Shipbuilding Plant“ Zaliv ”(Moscow) with the support of the so-called“ Self-defense of the Crimea ”and stopping all activities. Well, perhaps the raider seizure was, that's just, according to SBU, he was not led by an emissary from Moscow under the protection of the "green man", but the chief engineer of the plant, Yuri Bogomyagkov, and the workers of the plant.

What is the factory "Bay"? And how right was Vasuta, saying that the gulf could build a "Mistral" or something like that?

It turns out, the minister is right. 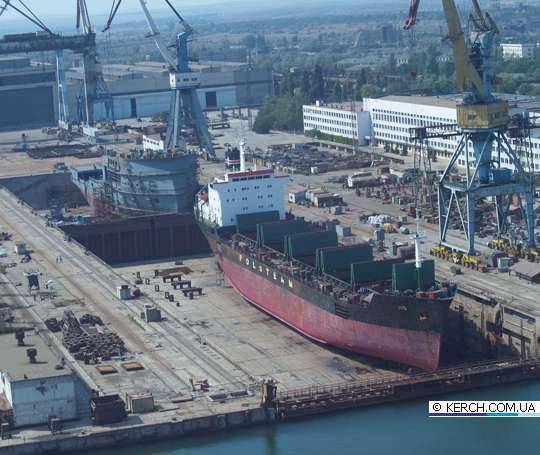 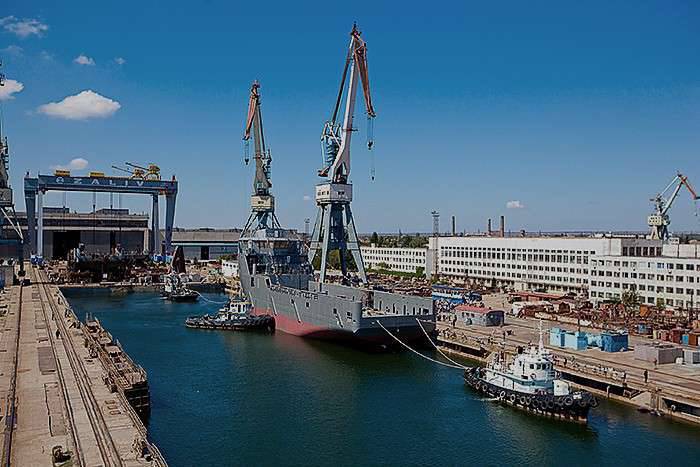 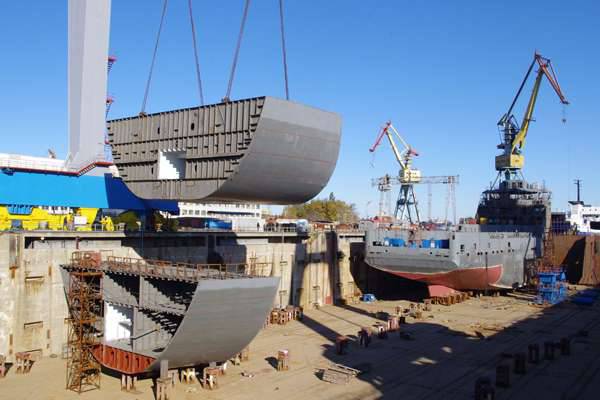 The dry dock can be divided into two parts, which allows for the parallel repair and construction of several vessels at the same time.

The other technological complex has two horizontal slipways of 400 m length with the following cranes: two for 80 t, three for 32 t and four for 16 t. Both lines have a common triggering device — a transverse slip, which ensures the descent of ships weighing up to 2500 t .

If in general, the base is available. However, according to Vasiuta, the plant has degraded considerably over the past 20 years and needs significant modernization.

"The first of the problems we have encountered is the large depreciation of fixed assets and, as a result, the need for substantial modernization of these enterprises. It's no secret that all 23 years of being part of Ukraine are practically a process of degradation of these enterprises, a gradual decrease orders, a gradual decrease in competence. "

And there is the problem of the outflow of personnel, which in an amicable way, must be returned back to the factory.

And this can be done with a very simple condition: orders. At the moment, at the shipyard in Kerch there are two rescue ships of the project А-163 and two universal sea tankers in operation.

If everything is exactly as Vasuta said, and the numbers do not seem to doubt this, then the problem that we have repeatedly discussed here on the site regarding the construction of large-capacity ships is not so acute.

Yes, the Gulf is difficult to compare with such monsters of shipbuilding as the Ocean, the Black Sea Plant and the Nikolaev Shipbuilding Plant named after 61 Kommunar. After all, the ships that still serve in the Russian Navy were built there in their time. "Admiral Kuznetsov", "Moscow", and many of our other warships.

However, if we proceed from the principle “use what is at hand and do not look for something else for yourself”, then if you put time and money in Kerch we will be able to get a shipbuilding base for your country, if it is inferior to Nikolaev factories, then only in part of past victories and success.

But, unlike the Nikolaev shipbuilders, their Kerch colleagues have a perspective. And this perspective must be fully developed and used with maximum efficiency. And then there will be no headaches for who and where will build a new Russian (say) aircraft carrier, helicopter carrier or BOD.

One thing is important: the Russian ship should be built only in Russia and by our specialists. This is the only way for 100% to be insured against the repetition of dubious "mystral" epics.

Ctrl Enter
Noticed oshЫbku Highlight text and press. Ctrl + Enter
We are
The results of the Zelenodolsk plant them. A.M. Gorky in 2014 yearSquadron for export
Military Reviewin Yandex News
Military Reviewin Google News
97 comments
Information
Dear reader, to leave comments on the publication, you must sign in.