Propaganda show. How the site "Crimea. Realities" covered the construction of the Crimean energy bridge

16 May 2016
87
Last week, all the “progressive humanity” in the face of scooping rules of life exclusively from CNN reports, Voice of America and Radio Liberty reflected on the blockade of one of the creations of that very Radio Liberty website Crimea. Realities.


From the statement of the prosecutor of Crimea Natalia Poklonskaya:
Internet resource "Crimea. Realia ”was created in March 2014 of the year, is one of the projects of the NGO“ Radio Liberty ”, registered in Kiev and the city of Prague, funded by foreign non-profit organizations. At the same time, on the territory of the Russian Federation of non-profit organizations the editorial office of the Radio Liberty radio program was liquidated in 2013. Internet resource "Crimea. Reality "systematically publishes publications aimed at inciting ethnic and inter-ethnic hostility, creates conditions for creating a negative attitude towards the Russian Federation and attracting illegal armed groups to the ranks (...), provides informational support for the actions of a number of accused persons who are hiding from the preliminary investigation bodies ...

Site will be completely blockedThis is unequivocally, our decision was sent for execution to Roskomnadzor.

The speech of Natalia Poklonskaya was published by the Republican Prosecutor’s Office of the Crimea 12 in May:

And after a few minutes after the publication of the decision to block the site “Crimea. Realities "came the first accusations against Russia of" aggression ". Yes, it is this wording used in the leadership of Radio Liberty in the person of Vice-President Naned Peich:
This is an act of aggression, used under the outrageous pretext of extremism to impose censorship against Radio Free Europe - Radio Liberty and the inability of the audience in Russia and the Crimea to gain access to the truth about annexation ... We condemn this as an encroachment on the work of Radio Free Europe - Radio Liberty "and the right of citizens to receive free access to information.

And the very next day, Roskomnadzor decided to unblock the site “Crimea. Realities, "announcing that" materials of an extremist nature have been removed from the site. "

RIA News cites the statement of the spokesman for Roskomnadzor Vadim Ampelonsky
Site unlocked. Yesterday they fulfilled our requirements and removed the illegal material. We can block the site only at the request of the Prosecutor General and his deputy, while no requests have been made.

In general, the site, the management of which managed to make a pant because of the loss of the opportunity to blow the heresy of the Crimeans in their ears, was unblocked and continues to work today for someone else's benefit. Whose? - a rhetorical question, if we consider, for whose benefit all the past decades (since its inception) Radio Liberty itself has been working.

Of course, you can talk for a long time about what the child of the “free European radio” itself carries for the Crimeans and all other citizens of Russia. But these arguments without a specific example will be clearly blurred. So here is an example ... It is connected with the introduction of the 4 (last) power bridge, which connected the power system of the Crimea and Kuban and made it possible to get rid of dependence on the part of the Ukrainian obscurantists, who tried to block the supply of electricity "on the ground".

Last week, the launch of the 4 line of the Crimean energy bridge in the videoconference mode was carried out by Russian President Vladimir Putin.

And what about this is expressed by the very blocked and unlocked “Crimea. Realities? And this is just interesting.

February 11 on the mentioned site published material, the author of which is a man named Arthur Voronin. Mr. Voronin in his article calls the construction (continued at that time) of the energy transfer from the territory of the Kuban to the Crimea (attention!) "A scam of the century". The article is replete with the words “propaganda tricks”, “occupation authorities”, “everything is bad” with attempts to prove that the Crimean energy bridge will never be built and will never be able to provide the Crimean Peninsula with electricity in proper quantities. In the article, the author in paints informs how the emergency response headquarters “manipulates the numbers”, “misleads the Crimeans”. The whole emphasis is on the fact that propaganda is coming from Moscow, and that the energy bridge is not a power bridge at all, but a fiction, and that the peninsula can never do without buying electricity from a “Crimea-loving with all my heart” Kiev. 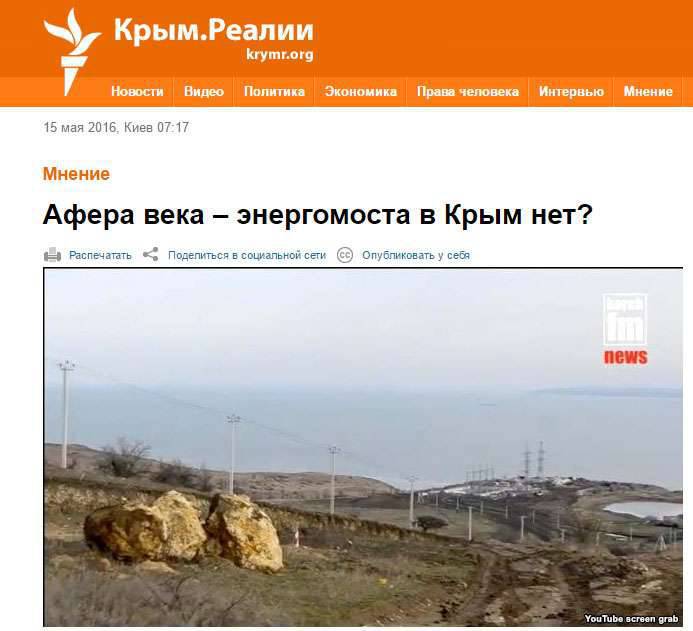 But it took three months and a little, and Mr. Economic Observer Voronin scooped up water ... The 800 MW of electricity comes to Crimea by the "energy bridge-fiction" line, the Crimean government is preparing to remove the formally existing emergency mode, and for the first time since the collapse of the USSR, they receive electricity without fear of blackouts, which the Kiev authorities (any) tested with the 1991 year.

But the staff "Crimea. Realities ”literally until the last time were published bullshit, according to which“ there is no energy bridge. ” So, April 19 is another major “specialist” in the field of energy bridges from the Crimea. Realities Grigory Ochagov I collected on the Internet the comments of all kinds of Maidan trolls who claimed that the third thread of the energy bridge introduced at that time was also, you know, a fiction. Maydannaya husk, which even in the Crimea has never been, with understandable only to her very frenzy, began to reflect on the topic of how “the project of Russia (rashki, of course ...) in Crimea will collapse when the holiday season arrives, and all pensions include air conditioning. " On air conditioners, the husks are obsessed, as is known, since the time of the bloody events near the building of the Lugansk administration. The fact that this husk itself in Ukraine monthly devours the Maidan tariff increases for electricity, gas and other services, faced with the shutdowns of the "light" and the temperature in apartments plus 14 in Celsius in winter - the site Crimea. Realities ", of course, do not care ... But the energy bridge, which is" fiction ", then yes ...

The same Mr. Ochagov stepped over the last facet of hypocrisy, when in the period of the energy blockade of the Crimea from Ukraine published materialin which he frankly mocks the situation of Crimeans during the so-called “Earth hour” (the hour when people voluntarily cut off electricity for solidarity with nature as a sign of understanding the complexities of the ecological nature in the world).

From the material of Mr. Ochagov:
Earth Hour, celebrated around the world on March 19, turned into the Crimea on the day of laughter.

But he laughs, Mr. Hearths, the one who laughs last. What now to invent Mr. Ochagov and Mr. Voronin to “Crimea. Reality "to work out the resulting cookies? What to invent, especially after the fiction was not the threads of the energy bridge, but the publications of the so-called themselves. “Experts,” especially when you consider that the “experts” did not even try to hide their satisfaction from the difficulties of the inhabitants of Crimea ...

And the “experts” themselves in the Crimea in general visited, talked with people, or Maidan trolling Twitter accounts created with the same means as “Crimea. Reality” for them is the main source of “information”?

It's all about what kind of “truth” carries “Crimea. The realities ”, and how much the howling would be, if at least for a hundredth part of a similar site, supervised, for example, from Russia, had a domain zone in Ukraine ...