The interrupted flight of the American "Cormorant" 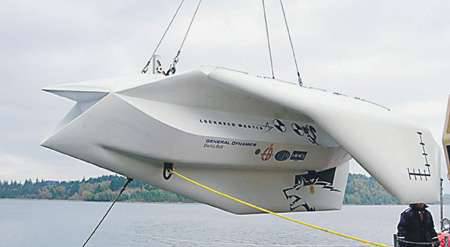 In the process of creating a nuclear submarine - carrier of sea-based cruise missiles and special forces groups (SSGNs) into which the first four Ohio-type SSBNs were converted, as well as littoral warships (LBK, recently according to changes in the classification, they became frigates) on the agenda, the question arose of the need to incorporate aircraft (LA) into their armaments, capable of quickly providing effective air support for their operations. First of all, it was about conducting day-to-day and all-weather reconnaissance and observation, issuing target designation and assessing the damage inflicted on the enemy, and shock tasks and support for the actions of special forces, including the delivery of supplies, were identified as secondary tasks.

At the same time, the small amounts of usable space available on relatively small LBKs and the characteristics of the SSGN's combat work did not allow to use either manned aircraft or large MQ-8 “Fire Scout” drones for these purposes. The only remaining option is the use of unmanned aerial vehicles (UAVs) capable of launching from the deck of the ship or from the surface of the water (in the latter case, it was possible to remove the apparatus from the submarine and then launch from the water), and also to board the water after completing the mission.

In this regard, the American military experts proposed to consider the possibility of creating a multi-purpose unmanned aerial vehicle (Multi-Purpose UAV or MPUAV) with a surface / underwater launch, which in the first place was supposed to be armed with an Ohio-type SSGN. The promising UAV was named after one of the most common sea birds - the cormorant, which in transliteration from English sounds more proudly - “Cormorant” (Cormorant).

In 2003, the Defense Advanced Research Projects Agency (DARPA) specialists of the United States Defense Department launched the six-month “zero” stage of this program, during which they conducted a preliminary study of the possibility of creating a UAV capable of independently starting from underwater or surface carrier and determine the tactical and technical requirements for it.

Dr. Thomas Butner, who worked in the agency’s Tactical Technologies department and also supervised Friction Drag Reduction and Oblique Flying Wing programs, was appointed project manager. Within these programs, respectively, it was assumed to develop a model for estimating friction resistance with respect to US Navy surface ships and developing technical solutions to reduce it (this reduced fuel consumption and increased speed, range and autonomy of ships sailing), as well as creating an experimental model of high-speed aircraft The “flying wing”, the wing sweep of which changed due to the “skew” of its planes (one plane moved forward (negative sweep), and the other - back (positive sweep).

According to DARPA spokeswoman Jeanne Walker, the prospective UAV was designed to “provide direct aviation support for warships such as littoral warships and SSGN. ” In accordance with the data of the project card published by DARPA, the following tasks should be solved within the program:

- develop a concept for the use of UAVs with surface and underwater start;

- to study the behavior of the UAV at the boundary of water and air;

- to work out new composite materials in practice;

- to ensure the strength and tightness of the UAV design, required for launching from the designated depths or from the surface of the surface ship;

- to work out the power unit of the UAV capable of withstanding aggressive environmental conditions on the underwater section, and also to demonstrate the ability to quickly start the main engine of the UAV to start from the water;

- to work out all the elements of practical application of the UAV - from the start from surface and underwater carriers to landing and evacuation.

Two years later, the Pentagon approved the transition to the first phase of the program, the 1 Phase, under which funding for the development, construction and testing of a UAV prototype, as well as funding for individual onboard systems was carried out by DARPA, and direct development of the device was assigned to the Skank Works division of the company Lockheed Martin. The company also took over part of the project costs.

“A multipurpose UAV will be part of a single unique network-centric system that will significantly expand the combat capabilities of the new SSGN created on the basis of the Trident system,” Lockheed Martin said in a press release. - Possessing the possibility of an underwater launch and distinguished by a high secrecy of action, the UAV will be able to effectively operate from under the water, providing the necessary aviation support. The combination of the Trident system and the multipurpose UAV will provide the commanders in the theater of theater with truly unique opportunities, both in the pre-war period and in the course of full-scale hostilities. ”

After examining various ways of placing the UAV on board an Ohio-type SSGN, Skunk Works' specialists decided to use “natural launchers” - the SLBM missile mines that had a length (height) of 13 m and a diameter of 2,2 m. wing - wing “gull” attached to the fuselage on the hinges and when folded, as if “embraced” him. After opening the lid of the UAV shaft, it was pulled out by the outer contours of the submarine body on a special “saddle”, after which it opened the wing (the planes rose to the sides upward at an angle of 120 degrees), freed from the grips and, due to positive buoyancy, independently floated to the surface of the water.

Upon reaching the surface of the water, two solid fuel starting accelerators — modified solid propellant rocket motors of the Mk 135 type, used at the Tomahawk SLCM — were put into operation. Engines have 10 – 12 running hours. During this time, they raised the BLAH from the water vertically upwards and brought it to the calculated trajectory, where the main engine was involved in the work, and the solid propellant rocket motors themselves were dropped. As a sustainer engine, it was planned to use a small-sized dual-circuit TRD with a 13,3 kN drive, created on the basis of the Honeywell AS903 engine.

The launch of the UAV was planned to be performed from a depth of about 150 feet (46 m), which required the use of high-strength materials in its design. The UAV case is made of titanium, all voids in the structure and docking units were carefully sealed with special materials (silicone sealants and syntactic foams), and the inside of the fuselage was filled with inert gas under pressure.

The mass of the device is 4082 kg, the mass of the payload is 454 kg, the mass of jet fuel of the JP-5 brand for the main engine is 1135 kg, the length of the device is 5,8 m, the wingspan of the gull-type is 4,8 m, and its sweep on the leading edge is 40 degrees. The payload included mini-radar, optoelectronic system, communications equipment, as well as small means of destruction, such as Boeing's small-caliber SDB aerial bomb or small-size UL with autonomous guidance system LOCAAS (LOw-Cost Autonomous Attack System) Lockheed Martin. The Cormoran's combat radius is of the order of 1100 – 1300 km, the practical ceiling is 10,7 km, the flight duration is 3 hours, the cruising speed is M = 0,5, and the maximum is M = 0,8.

In order to increase the secrecy of actions immediately after the launch of the UAV, the submarine-carrier had to leave the area immediately, moving as far as possible. After the unmanned aerial vehicle had completed the task, the command to return and the coordinates of the landing site were sent from the submarine. At the designated point, the onboard UAV control system turned off the engine, folded the wing and released a parachute, and after landing, the Cormoran released a special cable and waited for evacuation.

“The task of safely landing the 9000 pounds apparatus at a landing speed of the order of 230 – 240 km / h is very difficult,” emphasized then the senior project engineer Robert Ruzhkovski. - It was possible to solve it in several ways. One of them consisted in abrupt dumping of speed and execution of the cobra maneuver previously put into the onboard control system, and the other, more practical from a practical point of view, was to use a parachute system, as a result of which the device was prostrated with its nose forward. It was necessary to ensure the safety of the UAV itself and its equipment in the 5 – 10 g overload range, which required the use of a parachute with a dome with a diameter of 4,5 – 5,5 m. ”

The driven down BLAV was detected using a sonar, and then it was picked up by a remote-controlled uninhabited underwater vehicle. The latter was produced from the same missile mine, where the “drone” was previously located, and pulled along a long cable that docked with the cable released by the UAV, and with its help, the “drone” was wound up on the “saddle”, which was then removed to the submarine missile shaft.

In the case of the use of "Cormoran" from a surface ship, in particular LBK, the device was placed on a special pallet-boat, with which it was taken overboard. After splashing the UAV, all actions were repeated in the same sequence as when starting from a submerged position: starting the starting engines, turning on the main engine, flying along a given route, returning and landing, after which you just had to pick up the device and return it to the ship.

WORK DID NOT LESS

The first stage of work, in which the contractor had to design the device and a number of related systems, and also demonstrate the possibility of integrating them into a single complex, was designed for 16 months. 9 in May 2005, the corresponding contract worth $ 4,2 million was signed with Lockheed Martin Aeronautics, the main contractor for the program. In addition, the performers included General Dynamic Electric Boat, Lockheed Martin Perry Technologies and Teledine Turbine Engine Company, with which the relevant contracts for the total amount of 2,9 million were signed. The customer himself, DARPA, received in the 2005 fiscal year from the budget of the US Department of Defense for this program 6,7 million dollars and requested another 2006 million dollars for the 9,6 financial year.

The results of the work on the first stage were to be two main tests: submarine tests of a full-sized, but not flying, model of the UAV, which was to be equipped with the main onboard systems, as well as tests of the “saddle” mock-up, on which the device was to be located in the atomic-powered missile mine installed on the seabed). It was also necessary to demonstrate the possibility of safely landing the UAV "nose forward" and the ability of its on-board equipment to withstand the overloads that occur. In addition, the developer had to demonstrate the evacuation of the landing UAV using a remote-controlled uninhabited underwater vehicle and demonstrate the possibility of ensuring the launch of the marching bypass turbojet engine by supplying high-pressure gas.

According to the results of the first stage, the leadership of DARPA and the Pentagon was to decide on the future of the program, although already in 2005, representatives of DARPA stated that they expect the United States Navy to enter into service in the 2010 financial year after the end of the 3 Phase.

The first phase of the test was completed by September 2006 (demonstration tests were conducted near the Kitsap-Bangor submarine base station), after which the customer had to decide on financing the construction of a full-fledged flight prototype. However, in 2008, the DARPA management finally stopped funding the project. The official reason is budget cuts and the choice of a Boeing company “Scan Eagle” as an “underwater” UAV. However, for the time being, submarines with Ohio-type cruise missiles and US Navy special forces groups based on them remain without a UAV with an underwater launch, and littoral warships that have become frigates can be used only by larger Fire Scout unmanned aerial vehicles and more simple "drone" mini-class.