Not the impeachment, not the coup

13 May 2016
57
Brazilian senators declared impeachment Dilme Rousseff. Not so much impeachment, but removed her from presidential power for 180 days. For six months, senators and members of the Supreme Court will consider all the charges against the president, and then the next vote will be held. Mrs. Rousseff called the impeachment "coup". In fact, her removal from power is based on facts - the president was accused of violating budget legislation. Rousseff and her office are guilty of plunging the country into poverty, lawmakers say. 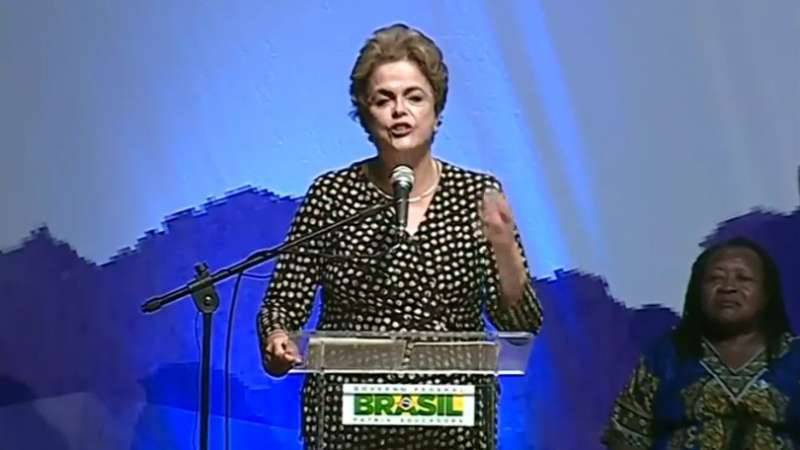 Dilma justifies, but she does not believe. Screenshot: German newspaper website "Zeit"

The upper house of the Senate voted to remove Dilma from power by a majority: “for” - 55 senators, “against” - only 22. The main reason for the “preliminary” impeachment is violation of the law by the Madam President regarding the budget. This charge will be considered by the judge in 180-day period.

It was decided that at the time of the proceedings from the presidential palace, Planaltu would move to the residence of Alvorad. The opinion of some Brazilian analysts who claim that from now on Dilma will bring down the backbone of the opposition against the new government is already known.

As for the latter, Vice-President Michel Temer will rule the country with an “aloof” president. Previously, this man was a political ally of Rousseff. He represented the Brazilian Democratic Party in both the 2010 and 2014 years. elected to his post with her in a pair. However, everyone knows: in the politics of the allies does not happen; in politics - only enemies. Today it came to the point that Dilma accuses Michel of conspiracy.

Among Temer’s plans is the restructuring of the government structure: he intends, as expected in the economic crisis, to reduce a number of departments and connect others.

Supporters of the impeachment accused Rousseff of financial irregularities that she made when distributing public funds. And we are talking not only about the last months of the government, but also about its previous presidential term. Prosecutors dug deep.

During the 180 days of handling claims against the president, senators and judges must carefully examine each item of the charges. Then another vote will take place. If at least two-thirds of the senators once again support the impeachment, then Mr. Temer will remain at the head of the state before the 2018 election, and Rousseff will get the real impeachment and leave the government in disgrace. If there are not enough votes, Ruseff will have to return to power. The latter, in our opinion, is highly unlikely, because with a powerful senate and popular opposition, Dilma can hardly rule the state.

Brazil events shook the world press. Many write about the "Rousseff case" in the United States and in Europe.

As indicated Washington Post, impeachment Rousseff "looks like the end of an era." The current economic and political model of the Brazilian state seems to have come to a final, albeit unexpected. The party that rules the 13 country for years loses credibility.

Vice President Michel Temer today puts forward other ideas: as opposed to the “leftist” principles of Rousseff, he declares a freer market, insists on economic recovery, as well as the “unification of the nation”.

Rousseff's projects to support large businesses, social welfare programs, poverty alleviation, and the formation of a new middle class have been ruined. Senators accuse 68-year-old Rousseff of illegally using billions of dollars in loans from state banks to replenish budgetary funds and finance social programs. Along with this, there is talk of corruption scandals in which most of the country's political elite are involved.

Supporters of Rousseff are calling for strikes and protest demonstrations, blocking bridges, but quite a few sympathizers of the dismissed presidency, their account goes to hundreds. Its accusers are much more popular among the people, claiming that Rousseff systematically “darkened” about the frustrated state finances, hiding the truth from the legislators and the public. She did this even before 2014, wanting to be re-elected as president.

A few hours after the vote, she gave a speech on TV, in which she insisted that her predecessors "used the same tactics", used the same "accounting", and that this was "not a crime." Prosecutors say that such “accounting” let through huge sums.

As for the 75-year-old lawyer and poet M. Temer, the son of Lebanese Christian immigrants, a lover of dandy dress, married to 32-year-old Marseille (on Monday she knocks 33, she is his third wife), he is hardly a popular figure in Brazil . Temer is one of those Brazilian politicians who were implicated in the bribe scandal at the state-owned oil company Petrobras. True, he was not accused. Recent polls showed the newspaper notes that only 2% of Brazilians want him to become president.

According to M.Troyo, a former Brazilian diplomat, a professor of international relations at Columbia University in New York, Temer is likely to change the country's trade policy, and this will make Brazil more attractive to American investors. Brazil will generally become closer to Western states - “both ideologically and practically, in terms of market access,” he noted.

How four hours ago conveyed "BBC", the interim president of Brazil Temer appealed to the nation.

He stressed that he would build policies based on national values, and promised to “restructure the economy.” He also named some of his appointees, including the former head of the Central Bank, H. Meirelles, who will occupy the post of Minister of Finance.

Temer stated: “It is urgent to restore peace and unite Brazil. We must form a government that will save the country. ”

According to him, “economic viability” is the key task of the new government. Temer believes that “it is very important” to restore confidence in the country abroad “in order to attract new investments.”

“Let's stop talking about the crisis,” he said. “Let's work instead.”

Ms. Rousseff condemned her removal from power, calling it a "farce" and a "conspiracy", and Temera accused of involvement in the "coup".

Impeachment is not related to allegations of corruption, but is primarily based on “accounting tricks” in the state budget, writes a German magazine Spiegel.

We are talking about illegal loans through state banks related to social programs, for example, assistance programs for farmers or families. The situation with such loans "masked." Information about multi-billion dollar loans was also hidden: the money was spent on government spending, and decisions were made without the approval of the legislators.

Hopefully, the newspaper notes that M. Temer, who has now taken the place of Rousseff, will be a cabinet of people who are not suspected of corruption.

Temer will hardly stand firmly on his feet if he risks reducing social assistance programs.

Today Temer exposes himself as a reformer of the economy. However, according to the survey, 58% of Brazilian citizens already want ... his resignation. The fact is that he is still part of the previous government and therefore is responsible for the problems created in the country. It is unlikely that the people will elect him to the presidency, if it comes to this.

As a result of the budget scandal that happened because of the “tricks” in the accounting department, the country is slipping into the abyss of poverty, and social programs carried out in every conceivable and inconceivable way Dilma Rousseff are now threatening to go down the drain. Of course, this will cause a storm of popular protests, and the provisional government of Vice President Temer will leave after the bankrupt government of Rousseff.

It is hard to say what kind of “investments” Mr. Temer is going to attract, since investors in crisis countries usually do not stretch. Crisis recovery scenarios are usually associated with loans from the IMF and other financial institutions that impose a number of well-known reforms on the state. The country quickly finds itself in debt strangulation and is forced to "privatize" state property, giving it away at half price or even for nothing. A good and familiar example is Argentina, who now lives in debt like silk.

Today Temer is happy: he came to power. On video frames he is everywhere with a smile. But this joy is premature. 5 August 2016 in Brazil should open the Olympic Games. It is because of them that summer in the country can go hot. Opponents Rousseff and her supporters can use the Games as a pretext for recriminations and clashes. No wonder Temer reiterates the unification of the people. But will he be able to lead the country through trials?

Observed and commented on Oleg Chuvakin
- especially for topwar.ru
Ctrl Enter
Noticed oshЫbku Highlight text and press. Ctrl + Enter
We are
Dilma without a postSecret informant. Who started the "Maidan" in Brazil?
Military Reviewin Yandex News
Military Reviewin Google News
57 comments
Information
Dear reader, to leave comments on the publication, you must sign in.