13 May 2016
39
Suppose for a split second that there would not be the People's Republics, that Ukraine would remain “united”, as illegitimate President Petro Poroshenko and his clique want, and what some good-humored citizens still believe. And what would be the amazement of the inhabitants of the legendary world-famous city of Krasnodon, if they suddenly woke up in a city under the unknown name of Sorokino? 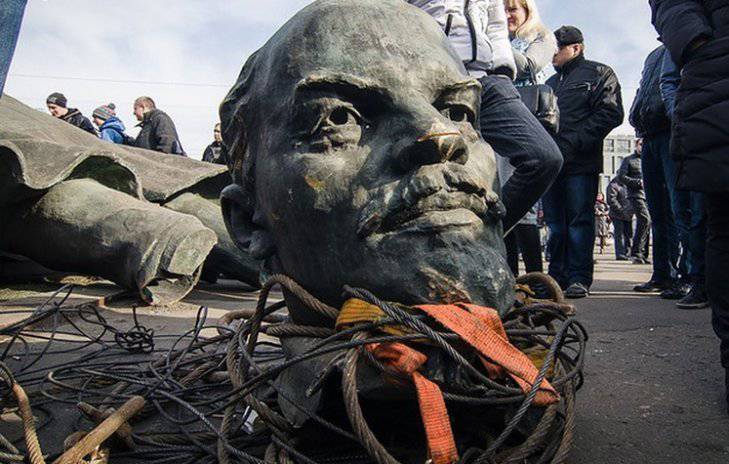 Fortunately, the People's Republic exist. Therefore, the insane fantasies of Ukrainian de-communizers will remain only in their heads. And the city of Krasnodon, located on the territory of the Lugansk People's Republic, will retain its majestic, heroic name. The Museum of the “Young Guard” will also be preserved (you can only imagine yourself in a terrible nightmare that lovers of decommunization would do to him!)

But renaming Krasnodon to Sorokino is far from the only initiative of the neo-Banderas. Their convincing little ideas also apply to other cities of the DPR and the LPR. Of course, Ernst Telman, a great fighter against Hitler’s fascism, did not please them, after whom the city of Telmanovo was named in the Donetsk region. This city decommunisators prepared the name Boykovsky. Another city, also named after a foreign anti-fascist, Torez, is willing to rename Chistyakovo.

The legendary drummer of labor Alexey Stakhanov, in whose honor the city of Donbass is named, is disgusted with the decommunisers. Stakhanov punished name Kadievka.

In general, the Verkhovna Rada of Ukraine would like to rename 75 cities and villages, as well as three districts in the DPR and the LPR. The corresponding decree Rada adopted 12 May. 245 MPs voted for him.

Fortunately, the current Ukrainian junta has short hands to rename something in the Donetsk and Lugansk People’s Republics. And this resolution is an act of impotent malice, since it cannot influence anything.
But de-communisators from the Rada and other power structures of the “404 country” do not want to calm down. They also wish to de-communize the Crimea, to which their little hands also cannot reach. Otherwise, as an attempt at self-gratification, this insanity cannot be called.

No wonder the Crimeans have already responded to this initiative with a joke, that after such decisions Kiev should be renamed “Marasmograd”, and Lviv - Bander-Saray.

All this would be ridiculous if the grimaces of the de-communisators would remain a simple clownery. But, alas, that which is a clowning in relation to the DPR, the LPR and the Crimea, is a daily reality for the territories occupied by the junta. And within this terrible reality, referring to the law on de-communization, neo-Nazi sadists really attacked and will continue their barbaric attacks on war veterans, on people who wish to honor the memory of their ancestors who fought against fascism. For the elderly and children - for those who are unable to give a proper rebuff.
And those few who dare to speak out against the criminal actions of the Ukrainian junta will continue to be under the yoke of neo-Nazis.

In particular, this is journalist Ruslan Kotsaba. Which, although it supported both Maidan, but had the courage to speak out against the criminal war of the Maidan clique in the Donbas.

Fortunately, he was charged with “treason”, for which a “luminary” journalist was given a long prison term. But - only for words - he was sentenced to three and a half years in prison.

The criminal website “Peacemaker”, the publication on which personal data of opponents of Maidan have repeatedly led to real deaths, published information about thousands of journalists who received accreditation on the territory of the DPR. This fact has already caused protest at the international level, but the monster site is still not closed.

Meanwhile, from Kiev they report: the memorial plaque to the underground worker Tatyana Marcus, who was shot by the Nazis in 1942, was eliminated. The young heroine shot the occupier and said: “All of you, the fascists, will face the same fate!” Now this girl was executed the second time ...

Unfortunately, the destruction of monuments associated with the Great Patriotic War, under the pretext of decommunization, is the sad reality of today's Ukraine.

And the veterans of the occupied Slavyansk doused with brilliant green are also a reality ...

Ctrl Enter
Noticed oshЫbku Highlight text and press. Ctrl + Enter
We are
Situational analysis of the death of the MH17 flight (Malaysian Boeing 777), made on the basis of engineering analysis from 15.08.2014Results of the week. “You are already indebted to the sea: neither the bottom nor the coast”
Military Reviewin Yandex News
Military Reviewin Google News
39 comments
Information
Dear reader, to leave comments on the publication, you must sign in.