Nemtsov asked for forgiveness from hamsters 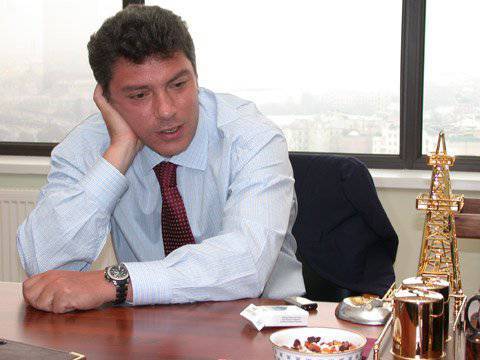 Because of the joint rally that was scheduled for December 24, in Moscow, the publication of various compromising materials began on the Internet. This time, Boris Nemtsov, one of the leaders of the opposition movement called “Solidarity”, became the object of close attention. Most recently, the portal «Lifenews.ru», laid out the recordings of telephone (private) conversations of B. Nemtsov. It was made public about 9 audio recordings, which are called "The secret negotiations of B. Nemtsov with the opposition." Some headlines were also attached to them, in which the fact that B. Nemtsov speaks of his fellow political fighters was clearly demonstrated, in a rather impartial manner. He spoke of them as “scum”, “bitches”, and “n ... sah,” and called people “fearful penguins” and “hamsters” who attended the rallies.


Today, politician B. Nemtsov, commented on this publication, as well as his remarks. First of all, he apologized to those who could insult these rude remarks. In his blog, B. Nemtsov wrote: “I apologize to Bozhena Rynskaya, Evgenia Chirikova, and everyone who was insulted and hurt in my telephone conversations.” “I’m sure I’ve done completely wrong. You need to restrain your emotions, and always follow and control your words, and even when talking with friends and family, and by telephone. ”

The politician noted that some of the conversations posted on the Internet were genuine and took place, and the other part was merely a result of editing, or an outright fake. However, he did not specify which records were the result of installation, and forgeries, and which were genuine. At the same time, the oppositionist stressed that the fact of recording telephone conversations from a private person is nothing more than a criminal moment.

B. Nemtsov wrote: “They shamelessly and brazenly violated my rights under the constitution, and the rights of my interlocutors, to the sacrament of telephone conversations and correspondence. And they were not at all embarrassed by the fact that under the articles of 138 and 137 of the Criminal Code of the Russian Federation, imprisonment up to 5 years is supposed for this. ” He also stated that the mentioned publication was “very unpleasant for him”, because “telephone conversations are equal to letters”, and “to read other people's letters, very ugly, indecent and impolite, even if these very letters are abusive”.

The oppositionist noted that “in public,” he never allows himself any indecent statements, and swore oath to everyone that in the current “historical days ”, does not intend to offend or criticize any of his associates, partners, associates and colleagues. He called the publication of the incriminating evidence a provocation. He said: “It is clear that the purpose of the provocation is the thirst for the breakdown of the rally scheduled for December 24th. They do not want a lot of people. That is why Surkov and Putin resorted to such a simple, and by the way criminal, way of contributing to the discord of the ranks of the opposition and the organizing committee of the rally. ”

It is worth noting that in the course of the telephone conversations mentioned, politician Boris Nemtsov proposed to Sergei Parkhomenko (journalist) to organize a club whose members had not yet had sexual relations with Bozhena Rynskaya. In another conversation, he calls someone from the associates of the opposition "pi..sami." By the way, the authors of publications in parentheses clarify who we are talking about - this is Boris Akunin (writer) and Leonid Parfenov (journalist). However, in the recording itself, their names or circumstances indicating this are not mentioned.

The unflattering epithets that are sent to the address of the protesters, the written decoding of telephone conversations places a very positive context. It is known that most of the records (published) were made on the eve of the rally held on December 10 in Moscow, when the opposition could not agree where it should be held. Two places were discussed: 1. Where the rally was initially agreed upon - Revolution Square, 2. Or where tens of thousands of people can be accommodated - Bolotnaya Square.

B. Nemtsov, in his conversation with Valery Panyushkin (a famous writer) commented: “This square cannot accommodate such a large number of people. And since many will come from the “office plankton”, these internet hamsters, that they have never even seen a living policeman, and forgive me, but I will not turn people under the batons ”.

In another dialogue, the politician said almost the same thing: “The composition of tomorrow's rally, is radically different from all previous ones. It will be mostly cowardly public. A sort of white collar. They are terribly afraid to fall under the baton of riot police. All these people have some kind of support from the authorities, which does not shun to provoke Internet wars, in which they all confront each other. So they are infinitely afraid and shaking from the fact that they can sweep. And since most of these fearful penguins will be on the square, I believe that we must do everything so that they will not suffer in any way. ”
In the meantime, statements were made from those people who were more or less affected by the above-mentioned dialogues of B. Nemtsov. For example, Aleksei Venediktov (chief editor of Ekho Moskvy radio station), whom the oppositionist reproached for "b ... skim" behavior, claimed that this publication of telephone conversations would contribute to the rally scheduled for December 24, even more people , rather than previously expected.

"Echo of Moscow" quoted him saying: "I believe that more people will come, because everyone felt in the place of the politician B. Nemtsov, and realized that his phones are also possible to listen, and information can easily be merged in the media . I am sure that every citizen of the country felt himself wounded and humiliated by this glaring violation of the Constitution. I know a few people who did not want to go to the rally, but after these publications, they declared their firm intention to be there. ”

According to RIA "News”, Many people agreed with this opinion, including the direct organizers of the rally called“ For Fair Elections ”. Olga Shorina (spokeswoman for Solidarity) commented: “It is quite obvious that the purpose of publishing the recordings was to introduce discord among the rallies and organizers. But as far as I understand and know, all members of the organization are well aware of the baseness and meannesses of provocateurs who put such personal negotiations on public display. And we all perfectly understand that their actions should not prevent us from doing our common cause. ”
Ctrl Enter
Noticed oshЫbku Highlight text and press. Ctrl + Enter
We are
Rallies: the number of supporters of the government exceeded the number of oppositionists
Military Reviewin Yandex News
Military Reviewin Google News
28 comments
Information
Dear reader, to leave comments on the publication, you must sign in.