"Tell me that I loved the Motherland very much. Farewell, my children ..." (about Marina Marutaeva)

13 May 2016
23
Marina Alexandrovna Shafrov-Marutaeva in Belgium is called the second Jeanne d'Arc. The bold, sacrificial act of this young woman was such a challenge to fascism that Marina was engaged in the work of Hitler. He, eager to intimidate people, gave an atrocious order to guilty Marina Alexandrovna. And he, trying to hide the memory of the heroine, ordered to hide her remains in an unknown tomb. However, it was not possible to destroy the memory.


... Marina was born in the town of Revel (Tallinn) into a military family, captain I rank Alexander Alexandrovich Shafrov, and Lyudmila Pavlovna's sister of mercy. When Marina was small, the family moved to Brussels. However, in the 1930 year, Aleksandr Aleksandrovich submitted documents to the USSR Embassy with a request to allow him and his family (by that time Marina was already married, she had two sons growing up) to return to their homeland, and this permission was obtained. But the war began. 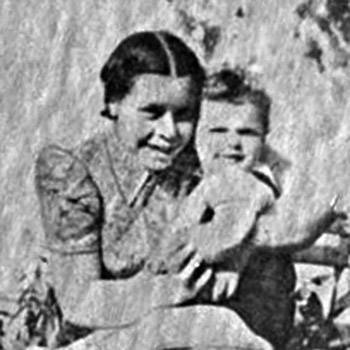 In May 1940, the Nazis occupied Belgium. The occupation government was headed by General Alexander von Falkenhausen. Marina and her husband Yuri joined the resistance movement.

The fascists banned civilians from keeping radio sets in their possession, for which they were threatened with immediate execution. However, Marina did not execute the order of the Germans, listened to Sovinformburo reports daily, translated them into French, printed or copied many times by hand and pasted the resulting leaflets on the streets of Brussels. “Moscow Says” - this was the title of all of Marina’s leaflets. She was a coherent commander of the corps of the Belgian partisans and often carried out tasks related to reconnaissance and sabotage. And in August, 1941 of the year began to operate independently: set up roadblocks on the roads, scattered nails and broken glass, set fire to tanks with fuel. The obedience of the Belgians to the invaders surprised and angered the woman: “Is there really no person in Brussels who could sabotage or kill at least one German? she said. - It will serve as a push for many. Someone would be ashamed of his humility and inaction ... "

In the evening of December 8. 1941, Marina entered the square of Port de Namur. Not far from the building of the military commandant's office was Major Kruge, deputy German military commandant. Marina stole a kitchen knife, walked over to the fascist and punched him in the heart.

She did not expect salvation, because it was in the very center of the city, in front of policemen and civilians. The woman saw the task in a friend: she fought against the invaders as best she could. And I wanted to show the fascists that sooner or later retribution would catch them. And civilians - that you can not always be in fear and obey the invaders.

So, Marina at that time did not expect to slip away. But slipped away. There was such a panic among the policemen that the woman managed to jump into the tram and escape.

She didn't tell anyone at home. And even her husband Yuri, the closest person, did not know that it was his wife that committed the act that shook the whole city that day. At first the Germans decided that the saboteurs committed the murder. But soon they guessed that the resident of Brussels did it. To seize the impudent invaders decided by all means: the terrorist act had to be reported to Hitler, and he went berserk. “You have killers walking around the city, and you are not scratching yourself!” Shouted the Fuhrer. "Killers" ... This is after what the fascists were doing in a foreign land ...

Mass searches, raids, and arrests began in the city, but they also resulted in nothing. In search of the criminal, the forces of the Gestapo, the military gendarmerie, the police were thrown - and it was found out that the killer was a woman. And then the fascists they took hostage sixty civilians. Announced: if the murderer of Major Kruge does not appear on December 15 in 20-00, all the hostages will be executed ...

15 December 1941 Marina Alexandrovna, a young woman who dreamed of returning to Russia, walked the streets of Brussels for several hours. She did not doubt the loyalty of her decision to come to the commandant's office. No, she was gathering strength, because her husband and two sons, Nikita and Vadim, six, who were just three years old, were waiting for her at home.

... I'll leave the story for a minute. Describing the distant December 15, I try to imagine the state of Marina Alexandrovna. The natural course of human life: we do not know the date of our death, and therefore, as a rule, we do not prepare ourselves for the eternal separation from our relatives. And here - terrible scales: sixty lives of strangers and two - the most expensive, who only know this world. Hard to make a choice. But it is even harder not to retreat from him and not to betray anything.

Marina Alexandrovna returned home around six in the evening. I embraced Nikita, for a long time I couldn’t open my arms, I stroked his hair over his curly head. She went to the crib, where Vadik slept with a cloudless children's sleep, who did not know that from tomorrow she would be left without a mother. The last Marina Alexandrovna hugged and kissed her husband. And in her desperation, he realized, he guessed everything. He began to dissuade and convince that the hostages were shot, even if she came - the Nazis are too angry. But the woman was adamant.
How, where did she get the strength to leave home? ..

Only Marina Alexandrovna came to the commandant's office with a confession. Just as some time ago, she approached the Wehrmacht captain in a crowded block and hit him with a kitchen knife. I killed.

Marina Alexandrovna was sent to Saint-Gilles prison, and the hostages were released. A court was appointed to which the fascists ordered to bring Nikita and Vadim. How happy the boys were! The poor ... They thought they would leave this unfamiliar building with their mother ...

“I am Russian,” said Marina Alexandrovna at the trial. “The Russians are suffering now, and under these conditions we must do something to help them in the struggle.” With all I can, I want to help my Motherland. ” 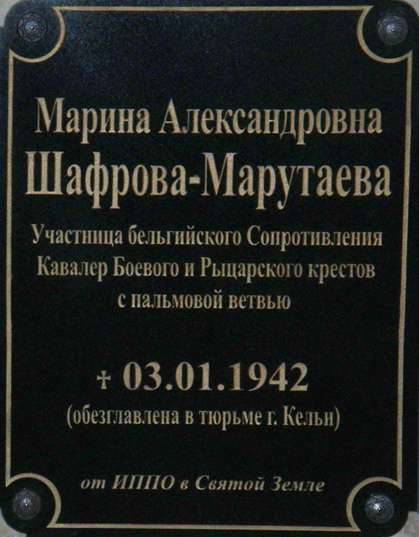 The court sentenced Shafrov-Marutaev to be shot. But von Falkenhausen refused to approve the verdict: he was afraid of revenge. After all, inspired by the feat of the Russian woman, many Belgians joined the ranks of the Resistance, joined the partisans. The movement, which was initiated by Marina, was gaining momentum. And to the prison building where the heroine languished, they brought flowers every day. At night, the fascists threw them away, and in the morning new ones appeared. And the letters went - hundreds ...

The Nazis were very afraid of revenge. And they tried to reverse the incident in another way: they say, Marina Alexandrovna was Krug's mistress and killed him in a fit of jealousy. She was offered to confess this - and the death penalty would be abolished. But Marina Aleksandrovna did not agree. Shafrov-Marutaeva was sent to Germany. From it did not achieve recognition in collaboration with the guerrillas. And Hitler, who followed the process, gave the order ... “Beheading. Adolf Hitler "- it was written in the resolution. Shortly before, Queen Elizabeth appealed to the Fuhrer, asking for mercy from the mother of two young children. But she refused.

3 January 1942, on the eve of the execution, Priest Gerges came to Marina Alexandrovna to confess. Marina Alexandrovna said that she helped, as she could, to her Homeland, and her conscience was clear before the Fatherland and God. She asked me to give the last letter to the children. Here are his lines: “My dear boys, Vadik and Nick. Years will pass, you will become adults and, I hope, will understand me. I feel that this is the last night when I'm still with you. I am executed in the morning. This is my last letter to you. I am not afraid of death, and God will send me the strength to accept her calmly and proudly. I have fulfilled my duty to my homeland, Belgium, my family and you. Over the years, you will become adults, but do not forget that Russian blood flows in you. She will call you to the homeland of your parents. Bow to Russia from me with a low bow, tell me that I loved her very much. Goodbye my children. Love each other. Your mother"...