12 May 2016
4
During the international exhibition of special-purpose weapons SOFEX-2016, which is taking place in the capital of Jordan, Amman, the head of the Rosoboronexport delegation Valery Varlamov noted that export promotion of the Russian-made Uran-6 robot sapper has begun. This is the same robot sapper who managed to prove himself when mine historical parts of the Syrian city of Palmyra (Tadmor). 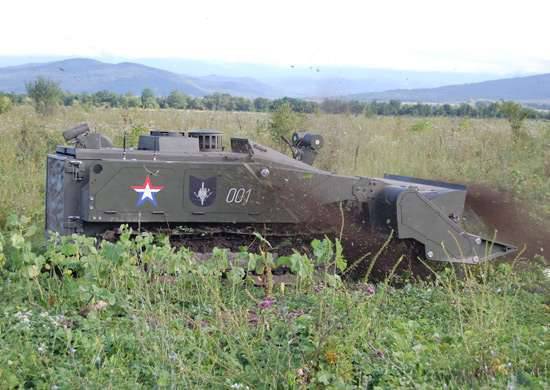 RIA News quotes Valery Varlamov:
As for the "Uranium-6", today a passport of export appearance has been formed. We are already starting to prepare the ground so that our foreign partners would be willing to cooperate with us in this area.

In addition, there is a conversation that in the near future not only the sapper version of the robot, but also its fighting and fire-fighting modules can be exported.

For your information:
The mass of the Uran-6 robot sapper is about 6 tons, the speed is up to 15 km / h. 4 video cameras are installed onboard the equipment, which allow to conduct a circular view of the demining site. For greater efficiency, the Uran-6 uses attachment kits, including trawls and dumps of various types. The robot is intended both for complete demining of a terrain site, and for making safe passages on anti-tank and anti-personnel minefields.

Ctrl Enter
Noticed oshЫbku Highlight text and press. Ctrl + Enter
We are
Innovation Day of the Southern Military District: Pictures from the ExhibitionThe action “Military service under the contract is your choice!” In Rostov-on-Don: future contract servicemen, exhibitions and “Russian Knights”
Military Reviewin Yandex News
Military Reviewin Google News
4 comments
Information
Dear reader, to leave comments on the publication, you must sign in.