14 May 2016
33
Attempts to divide terrorists into good and bad are not just short-sighted, but criminal


The world in Syria is very fragile, negotiations with representatives of the opposition are difficult. How will the situation? On whose side will the coalition led by the United States act? Is a concerted fight against international terrorism possible? Answers to these questions were sought by the participants of the V Moscow Conference on International Security. The forum brought together more than 500 representatives from military departments and international organizations from 80 countries. MIC offers readers presentations that set the direction and level of discussion.

For the fifth year already, the heads of military departments, prominent political and public figures, authoritative representatives of academic and non-governmental organizations from different countries gather in the spring in Moscow for a serious and frank conversation. Traditionally, we bring up for discussion questions on the solution of which the security of ordinary people and entire states depends.

Since our last meeting, the world has not become more durable. Despite the joint efforts of Russia and other states, in a number of regions the situation is far from stability. They are fighting. Developed block thinking. There is a haunting line of some countries to dictate the will of the international community.

Obviously, the threshold for the use of force is reduced. Anti-missile defense projects that are dangerous to the fate of the world, a lightning-fast global strike continue to be implemented, including the use of high-precision long-range weapons that are comparable in effect to nuclear weapons. This undermines the already fragile architecture of international and regional security.

In this situation, more than ever, new proposals are being sought to strengthen equitable and mutually respectful military cooperation, which should contribute to the development of honest and responsible political decisions.

Terrorism has become the number one problem for all of us.

Illustrative examples of this are the death of a Russian passenger plane over the Sinai, recent Islamist attacks in Europe, rampant terror in the Middle East, where a number of countries are on the verge of losing statehood, the situation in Afghanistan, militant attempts to gain an additional base in Asia-Pacific and Central Asia. 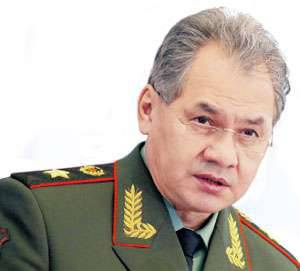 It is time for the global community to come together. This can and should be done on the basis of the initiative of the President of the Russian Federation to create a broad antiterrorist coalition based on the norms of international law and the provisions of the UN Charter. I want to emphasize that any attempts to flirt with terrorists, to divide them into good and bad, and even more to arm them to achieve selfish political goals are not just short-sighted, but also criminal.

For the Ministry of Defense, the elimination of this threat is one of the priorities. Our main goal is defined by the president of Russia - to stop terrorism at distant approaches, to prevent him from spreading to our country. This is the task we are solving in Syria, where, in full compliance with international law, at the request of the legitimate leadership, we support the Syrian army in the fight against the IS prohibited in Russia, Dzhebhat al-Nusroy and other criminal groups.

Syria's terrorism has been dealt a powerful blow. The military, material, technical and financial infrastructure of the militants was undermined, their training camps and weapon caches destroyed. With the support of the Russian aviation Syrian troops liberated 500 settlements and more than 10 thousand square kilometers of their territory. The government army and the forces of the patriotic opposition managed to seize the initiative in all key areas. But the main thing is to create conditions for the beginning of the peace process in the country.

This allowed us to adjust our work in Syria. By decision of the President of Russia, part of the aerospace forces was withdrawn from the territory of this country, and the remaining air force there continues to strike at the gangs. We intend to consistently destroy the economic basis of the IG, whose main source of income is oil smuggling.

The Russian Ministry of Defense has repeatedly shown who and to whom supplies stolen oil, from where terrorists take money. Together, decisive action we must put an end to this.

Today, Russian efforts are focused on a political settlement of the conflict, humanitarian assistance to the population of areas affected by terrorists.

The turning point of the armed confrontation in Syria was the release of Palmyra from the IG. Now it is necessary to create conditions for the restoration of this monument of the world historical heritage: to clear from mines, to ensure safety and normal conditions for the work of UNESCO specialists there. We count on the practical support of all states, the United Nations, including its specialized organizations, as well as regional centers for humanitarian mine clearance.

In general, we positively evaluate our interaction with the United States in Syria. There is a bilateral agreement on the prevention of incidents in the air. The interaction of military structures responsible for the truce of the parties. Russia and the United States, as permanent members of the UN Security Council, have a special responsibility for maintaining universal peace.

That is why our countries are obliged to cooperate more closely in the fight against international terrorism. We are ready for this. Word for Washington.

We often hear from our Western colleagues: Assad will leave - and the bloodshed in Syria will stop. A coalition led by the United States will support Russia. However, it is difficult to believe in these "good intentions". The question arises: who prevented restoring peace, bringing order to Iraq and Libya after the removal of Saddam Hussein and Muammar Gaddafi?

The expansion of military-technical cooperation with the CIS member states, the development of the CSTO power component, the strengthening of the military organization of the Union State with Belarus are undoubted priorities in the international activities of the Russian defense ministry. 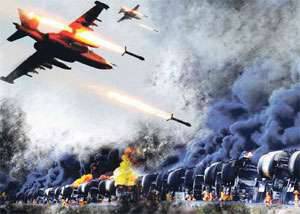 The parade on the occasion of the 70 anniversary of the Great Victory became the symbol of cohesion and indestructible brotherhood of our countries. More than 700 servicemen from the CIS and other friendly states marched in Red Square, paying tribute to the heroic efforts of the Soviet people in World War II.

We are interested in having our allies and partners have compact, highly mobile, armed with modern weapons and military equipment capable of reliably and effectively confronting challenges and threats. The logic of our actions is simple: strengthening the borders of the CSTO means strengthening the security of Russia. One of the common tasks is to prevent the spread of metastasis of terrorism to the space of the CIS countries.

In this context, we pay special attention to the alarming situation in the Central Asian region, the development of which is adversely affected by the terrorist threat from the territory of Afghanistan. We are convinced that the Russian military bases in Tajikistan and Kyrgyzstan are the guarantors of stability. Together with our allies, we are strengthening their combat readiness, which in turn enhances the security of Dushanbe and Bishkek.

It is in our common interest to build up the military component of the Shanghai Cooperation Organization. The Russian Ministry of Defense has initiated the creation of an institution of national military advisers under the SCO. Its implementation could increase the effectiveness of joint actions.

On the threshold of the absurd

European security issues will be discussed, but the situation in this area is deplorable. Russia's military cooperation with the countries of the North Atlantic Alliance and the European Union was frozen through no fault of ours. The meeting of the Russia-NATO Council held on April 20 did not add optimism.

The old schemes of control over the armed forces are outdated. The existing mechanisms are sometimes used by partners in bad faith. It will be difficult to create a new conventional arms control architecture in the face of an acute lack of trust in Europe.

A tough and uncompromising information war is being waged against Russia. There are statements about the threat from Moscow to European states, about the need for military deterrence of our country. As a justification for such actions, the absurd thesis is being replicated that Russia supposedly approached the “NATO threshold”. In general, everything is turned upside down.

Shouts from Brussels and a number of other capitals are distributed to us. And if they talk about the possibility of dialogue, it is only on the priority issues for themselves and, of course, in the tone of a strict teacher who is accusing a negligent student.

At the same time, the United States and NATO launched the deployment of military infrastructure near the Russian borders, implementing dangerous anti-missile plans, and increasing military spending. Such actions force us to take adequate military-technical response. At the same time, I want to say responsibly: we are against the arms race.

Obviously, attempts to isolate Russia made during the acute phase of the crisis in Ukraine failed. The act of Turkish aggression against the Russian bomber in Syria clearly demonstrated that the alliance was hostage to the adventurous policies of its individual members.

We are not against the restoration of relations with NATO, but this can be done solely on the basis of reciprocity, respect for national interests and with equal and indivisible security for all. It is better to communicate at the negotiating table, rather than through gun sights.

We are in favor of building an architecture of equal and indivisible security in the Asia-Pacific region. At the heart of the Russian initiative is the supremacy of international law, non-alignment, the peaceful settlement of disputes and conflicts, the non-use of force or the threat of force, respect for the interests of each other.

The meeting of the heads of the defense ministries of Russia and the ASEAN member countries was held for the first time in stories our relationship. We frankly exchanged views on the development of international military cooperation and security issues. This meeting is an important contribution to the upcoming Russia-ASEAN summit, which will be held in Sochi and is timed to the 20 anniversary of the dialogue partnership of our country with the association's states.

We see a common interest in cooperation for countering terrorism, non-proliferation of weapons of mass destruction, and overcoming emergency situations. We plan to expand cooperation in the fight against piracy, search and rescue of those in distress at sea.

The format of a meeting of ASEAN member defense ministers and dialogue partners has good potential. Over the past five years, it has become an effective, sought-after mechanism for regional military engagement.

I am sure that we have enough experience, knowledge and wisdom to work out concrete steps to strengthen international and regional security.