Erdogan was left without a "brother"

12 May 2016
29
Analysts have spoken about the likely resignation of Prime Minister Davutoglu earlier. Turkey did not doubt this. The stumbling block was Davutoglu’s mild disagreement with the policy of Erdogan, who decided to redo the parliamentary system of governance into a presidential one. 5 May became aware of the resignation of Davutoglu. At parting, apparently not wanting to contradict the "neosultan", the prime minister said that "fraternal relations" remain between him and Erdogan and even promised to maintain "loyalty to the president until his last breath." 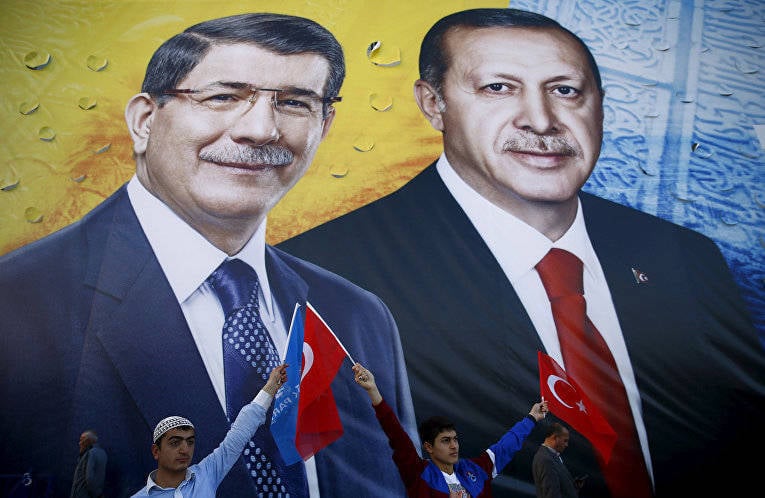 Ahmet Davutoglu resigns as Turkish Prime Minister. He recently confirmed that May 22 will not stand for leadership of the Justice and Development Party at an extraordinary congress. Davutoglu announced his decision after the May 4 meeting with the president.

Turkish analysts have identified disagreements between the prime minister and the president as one of the reasons for the resignation. The stumbling block was Davutoglu’s open disagreement with the policy of Erdogan, who decided to redo the parliamentary system of governance into presidential.

If earlier Davutoglu was relatively restrained regarding Erdogan’s domestic political plans, he now began to object to the possible replacement of the parliamentary system of governing with a presidential one. In this case, Erdogan would become a “neosultan”, and the prime minister would play the role of an errand boy.

In addition, Davutoglu opposed the detention of journalists and scientists who criticized the policy of Erdogan.

Davutoglu did not like it, said Turkish expert Serkan Demirtas, whose opinion leads "Lenta.ru"that Erdogan, not having the authority to do so, interfered in the work of the government. Despite the disapproval of the prime minister, the president sat down in the ministerial chairs of his son-in-law, Berat Albayrak, and a close associate of Binali Yıldırım, making them heads of the energy and transport departments, respectively. “Davutoglu tried to be an ordinary head of government in a parliamentary republic, the role of the“ pocket prime minister ”did not suit him. After all, according to the constitution, he has more rights than Erdogan’s, ”Demirtaş said.

“Clouds over the prime minister’s head tightened when the opposition newspaper Sözcü Gazetesi published a photograph on the front page of a man who looked like the son of Erdogan’s closest associate, Transport Minister Binali Yıldırım, in one of Singapore’s casinos,” Ksenia Melnikov writes on Lenta’s website. - The media controlled by the president said that these pictures were leaked to the press at the suggestion of Davutoglu, who "thus wanted to cast a shadow on the president and weaken his position."

That's not all: Turkish newspapers also reported on the Prime Minister’s likely visit to the United States. “The Hürriet Daily News” indicated that the White House quickly confirmed Davutoglu’s meeting with President Barack Obama and Vice President Joseph Biden, thus making it clear that the Turkish Prime Minister was much more pleased than the President.

Not surprisingly, we note that now among the likely candidates for the post of leader of the ruling party, Turkish publications have previously called Transport Minister Binali Yıldırım, Energy Minister Berat Albayrak (Erdogan’s son-in-law).

Professor of the University of Economics and Technology of the Chamber of Commerce and Exchange of Turkey Togrul Ismail commented BFM.ru resigning Davutoglu.

“There was a definite difference between the country's president and the prime minister on a political issue, it has existed for a long time. But yesterday’s conversation was the peak of this, the expert noted. - It all happened because Prime Minister Davutoglu decided to change the balance of power in the intra-party system. And this caused discontent with the president of the country. But in general, the problem is based on the fact that now President Erdogan wants to create a presidential system, and in this system he needs to have such a party leader or party leader who should not put a cane in his wheels. Davutoglu himself is not ordinary, especially since the last days or months, Davutoglu’s authority within the party has increased ... ”

The resignation of Davutoglu may affect international relations, in particular, affect the sensitive issue of the agreement on migration between the EU and Turkey.

As transmitted TASS with reference to the Financial Times, the resignation of Ahmet Davutoglu could jeopardize the implementation of the migration agreement between Brussels and Ankara.

“The departure of the Prime Minister threatens an agreement designed to drastically reduce the influx of asylum seekers into the EU and save Merkel from a potentially lethal political retribution,” the British newspaper quotes the agency. “In order for this deal to continue, Ankara is obliged to achieve several goals, including seriously reviewing its anti-terrorism legislation, guaranteeing civil rights, to which Erdogan went with reluctance. EU officials now fear that Ankara will move away from the promised reforms, ”the newspaper writes.

Also, we note, the replacement of Davutoglu, who has decided to softly criticize the president, with the general suppression of freedom of speech by Erdogan can cause discontent not only in Europe, but also in the USA If Erdogan succeeds (and the chances for this are great) both European and American political elites are even more inclined against him, then he may well have a color revolution, which the West has already approved in Turkey (“green” protests in 2013) ). Any riots in Istanbul and Ankara may well be supported by propaganda from the West, long displeased with Erdogan’s “neo-sultanism” (often compared in the Western media with Putin), asphyxiation of freedoms, and, most importantly, geopolitical unpredictability and disobedience. Not to the liking of the West and the financial bargaining of Erdogan due to migrants. Therefore, the color revolution in Turkey does not seem at all something incredible.

One should not think that the ideological protest will be headed by a soft critic of the regime who peacefully resigned - A. Davutoglu. When leaving the post of prime minister, Davutoglu stressed that “brotherly relations” remain between him and R. T. Erdogan and said: “Whatever happens, I will keep my promise. I will remain loyal to the president until my last breath. No one will hear a single bad word against Recep Tayyip Erdogan. ”

Perhaps such a pathos statement precedes clear historical Expectations of Davutoglu: Erdogan holds the puppet for the post of prime minister and becomes the sovereign political master, the “Sultan”, capable of voluntarily arranging “last breaths” for his opponents. In addition, after receiving the “pocket” prime minister, the president in his domestic policy will become absolutely predictable, solving political issues as he pleases.

What will come Turkey 22 May? If you predict a new color revolution in the current unstable Ankara, then you can’t even think of a better reason. Political opponents of Erdogan will not overlook this day.

Observed and commented on Oleg Chuvakin
- especially for topwar.ru
Ctrl Enter
Noticed oshЫbku Highlight text and press. Ctrl + Enter
We are
Results of the week. “And let's have a smoke! In our opinion, in Brazil! ”The attack on the Russian aircraft and the political situation in Turkey
Military Reviewin Yandex News
Military Reviewin Google News
29 comments
Information
Dear reader, to leave comments on the publication, you must sign in.